Support for Ukraine from Taiwan Continues, with Regional Realignments in Wake of Invasion

SUPPORT FOR UKRAINE from Taiwan continues, with 740 million NT for Ukraine raised within 18 days for a government-established relief fund that will be used for resettling refugees last month. Likewise, 216 tons of supplies have been sent to Ukraine from Taiwan to date, and there are plans to hold a benefit concert at the National Concert Hall in cooperation with the Polish representative office on April 17th.

Some forms of support have come from civil society groups and companies. In a press conference last month, Taiwanese drone company XDynamics Taiwan announced with the Taiwan Statebuilding Party that it would be donating ten drones worth a total of one million NT to Ukraine. The drones are capable of taking photos remotely, as well as transporting small amounts of medical supplies.

Otherwise, one notes a significant amount of attention to Ukraine from Taiwanese media, with domestic media sending journalists to report on the invasion of Ukraine. It is relatively rare for Taiwanese media to report from a war zone, although one notes that this has primarily involved coverage of Ukrainian refugees fleeing to Poland from the Polish border to date. As is obvious, there are inherent risks covering a war zone. 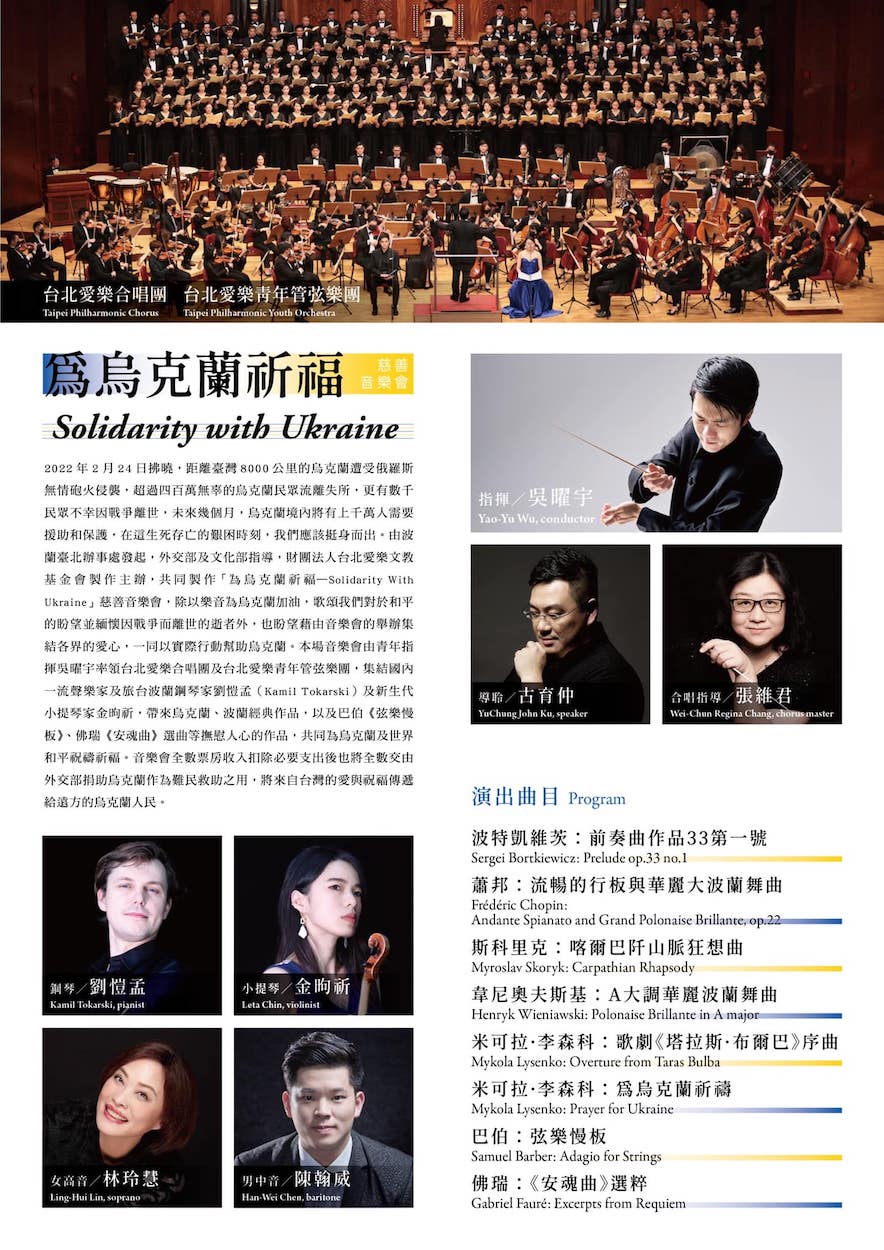 In particular, support for Ukraine can be seen as a proxy issue for Taiwan’s own concerns about facing the threat of a Chinese invasion. Taiwanese have not failed to notice the parallels between Ukraine and Taiwan, in terms of not only facing the threat of invasion from a larger power, but how Russia’s cultural and linguistic claims over Ukraine resemble China’s claims as to why it views Taiwan as an integral part of its territory. Indeed, one can compare to expressions of support for Hong Kong during the 2019 protests, in which Taiwanese contributions to the Hong Kong protest movement were also with the view of seeing Hong Kong as a proxy for Taiwan. One notes that during the same timeframe, for example, there is relatively little discussion of the COVID wave that Hong Kong is going through, or self-organized efforts to aid Hong Kong.

Likewise, Ukraine offers lessons in how a smaller country can fight off a much larger enemy. It is to this extent that there has been a renewed debate over whether to extend the military draft after the invasion of Ukraine. In particular, there are concerns that the current draft system, which requires only four months of service from individuals born after January 1st, 1994, is too short.

Nevertheless, such proposals from KMT members are unlikely to be in earnest, given that the KMT is the pro-China party in Taiwanese politics. Instead, such proposals are primarily made with the aim of targeting the Tsai administration.

Either way, military officials currently state that the evaluation period for considering an extension of the draft should not surpass one year. Some call for a shorter evaluation period of several months, while also warning that some individuals may rush to complete their military service in anticipation that the service period may be extended.

One expects continued regional diplomatic shake-ups as a result of the invasion of Ukraine. For example, polling shows that nine of ten Japanese are concerned about the possibility of China invading Taiwan. Some Japanese politicians have called for stronger support of Taiwan to counter this threat, including former prime minister Shinzo Abe making proposals such as allowing the US to station nuclear arms in Japan or calling on the US to commit to the defense of Taiwan.

One also notes the recent election victory of hawkish conservative Yoon Suk-yeol in South Korean presidential elections, on a platform that flagged geopolitical threats from China. It is to be expected that Yoon may also arrive at a position on Taiwan vis-a-vis regional concerns about China’s presence in the region. More broadly, then, one expects a pattern of regional realignments to continue to take place in the wake of the Ukraine invasion, with fears about China reinforced.