One case in Taipei was in a middle school in Songshan. The New Taipei case was found while being tested to enter a hospital and is thought to be an older case, due to the Ct value, though 13 have been quarantined in connection with this case. Contact tracing is currently proceeding for these cases.

The Delta variant cluster linked to the elementary school in Banqiao, New Taipei, which expanded to an apartment complex, has not added any new cases. 2,114 are currently in quarantine, while 131 are on self-health management in connection with this case. 2,196 tests have found 1,280 negative results, and 22 positive results. 894 tests are still being processed. 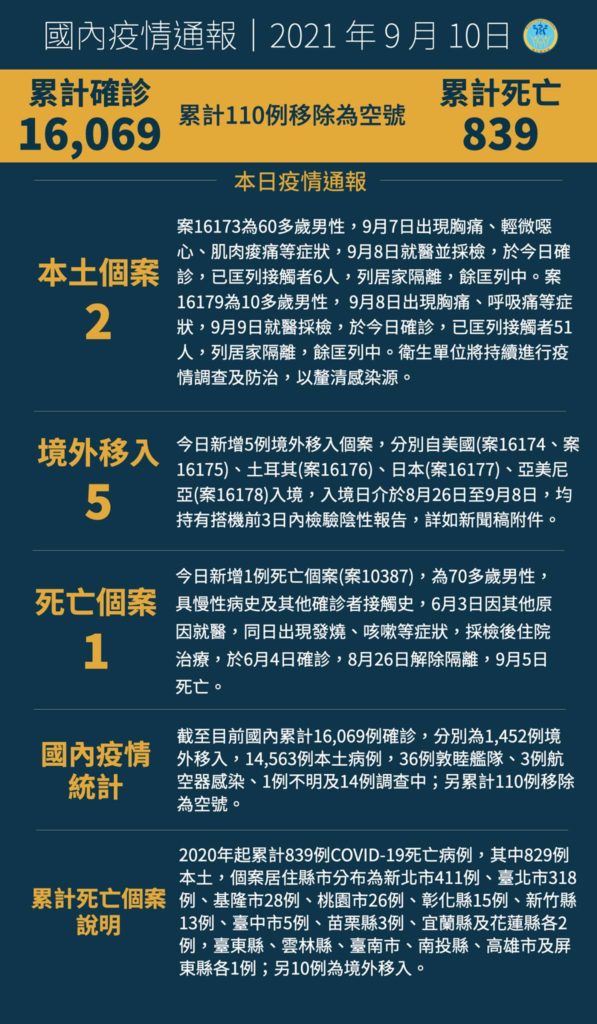 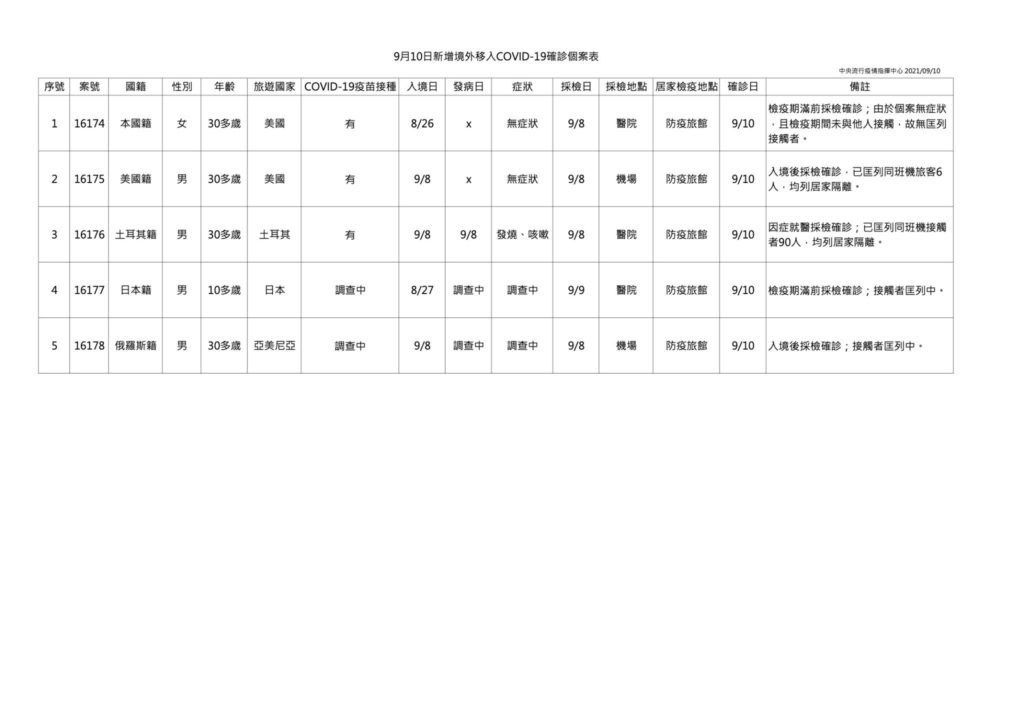 When asked about calls to handle the cluster in a manner similarly to the Pingtung Delta variant cluster, Minister of Health and Welfare Chen Shih-chung stressed the number of individuals that have been quarantined, which is over 2,000. Genetic variant testing shows that these cases primarily have the same source so far. When asked about disparities between travel history for Taipei and New Taipei, Chen stated that this may be due to delays in reporting.

The CECC is not ready to conclude that the Banqiao elementary school cluster is under control, with testing not finished.

The cluster is still thought to be unrelated to the small cluster that broke out among Taoyuan pilots. Testing of 227 contacts of one case and 197 for the other case have found no new cases. The Taoyuan Delta variant cluster is generally considered to be under control, though a clinic in Taoyuan has been closed due to contact.

Chen emphasized that airline staff should not be refused service at clinics and that they have a right to medical care. If hospitals or clinics are closed due to contact with cases will be carried through the evaluation of the hospital and of local authorities.

14 genetic testing results were announced today, which were all previously reported cases. 13 test results were Delta, while one was Alpha. The cases include among pilots, four sailors on a foreign vessel that entered Taiwan, and 5 cases classified as breakthrough cases.

121 Delta cases have been confirmed to date. 26 were cases of Delta transmission, including 13 cases in Pingtung, and 12 are from the Banqiao elementary school cluster. 95 cases were imported.

According to New Taipei mayor Hou You-yi, 16,206 were tested in New Taipei over the last four days. Hou called on the public to remember ventilation, given the high transmissibility of the Delta variant. Home vaccination for those unable to move will take place between September 15th and September 26th. Hou emphasized maintaining current measures to keep the situation under control.

Taipei mayor Ko Wen-je stated that of the three cases in Taipei in the last week, two were of unclear origin. 1,797 were tested yesterday in neighborhood testing stations, with no new cases found, but Taipei has seen an uptick to 852 individuals in home quarantine. Ko claimed that this would strain the medical system.

1,536 have been affected by class cancellations, with 405 in quarantine. According to Ko, some contacts occur outside of class, such as in sports teams, and so quarantines for classes can affect the school as a whole very easily. Some schools in Taipei are planning for possible closures. Testing buses have been sent to schools, along with individuals in quarantine.

Ko stated that he took the view that barbecues were fine to take place if they observed the same measures as restaurants, but he viewed it as a moot issue because of the typhoon tomorrow. Ko stated that a decision on barbecue over the mid-autumn festival would take place five to six days before. Ko attacked the central government on claims that supply for second dose vaccination are adequate, claiming that Taiwan was a medium-sized country based on the size of its economy, and so he dismissed claims about international shortages of vaccines. 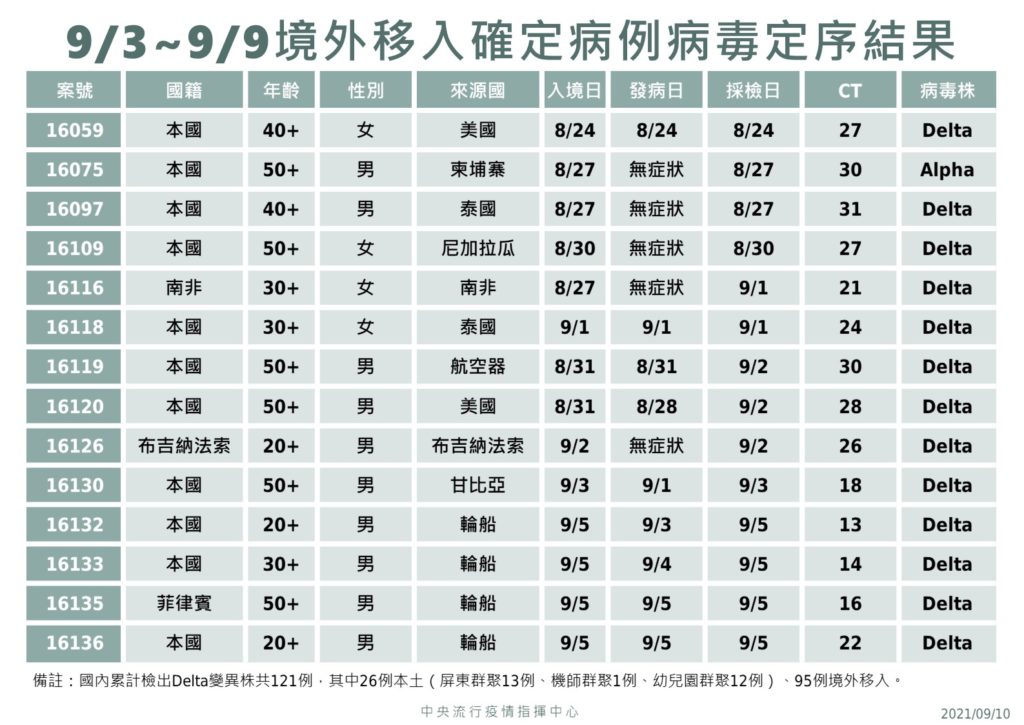 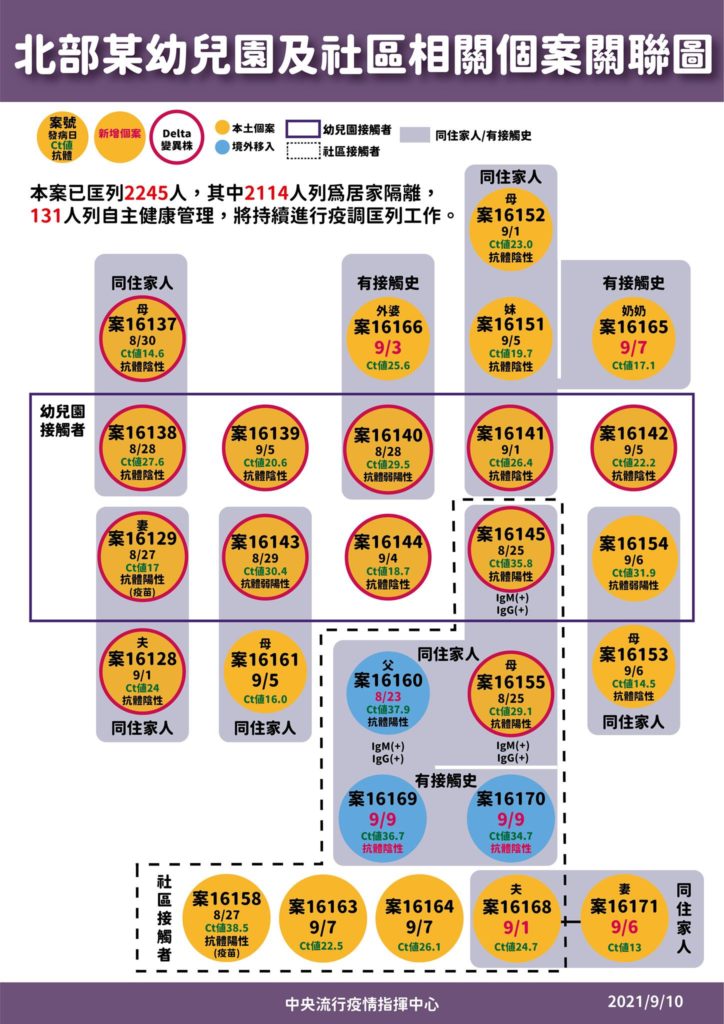 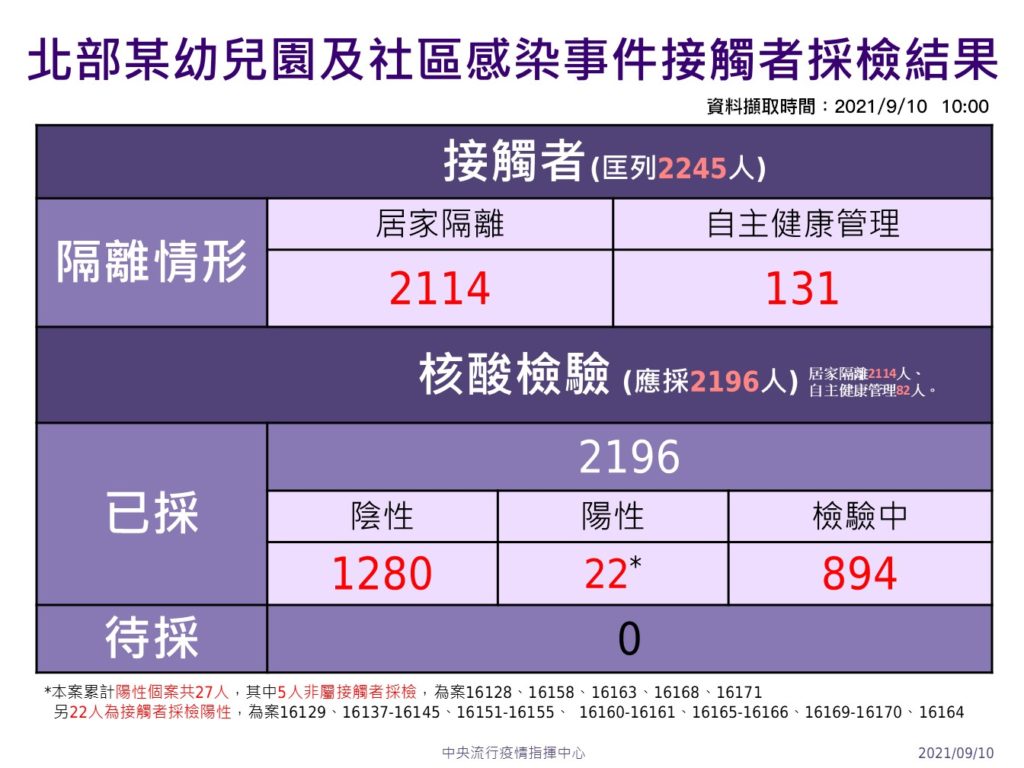 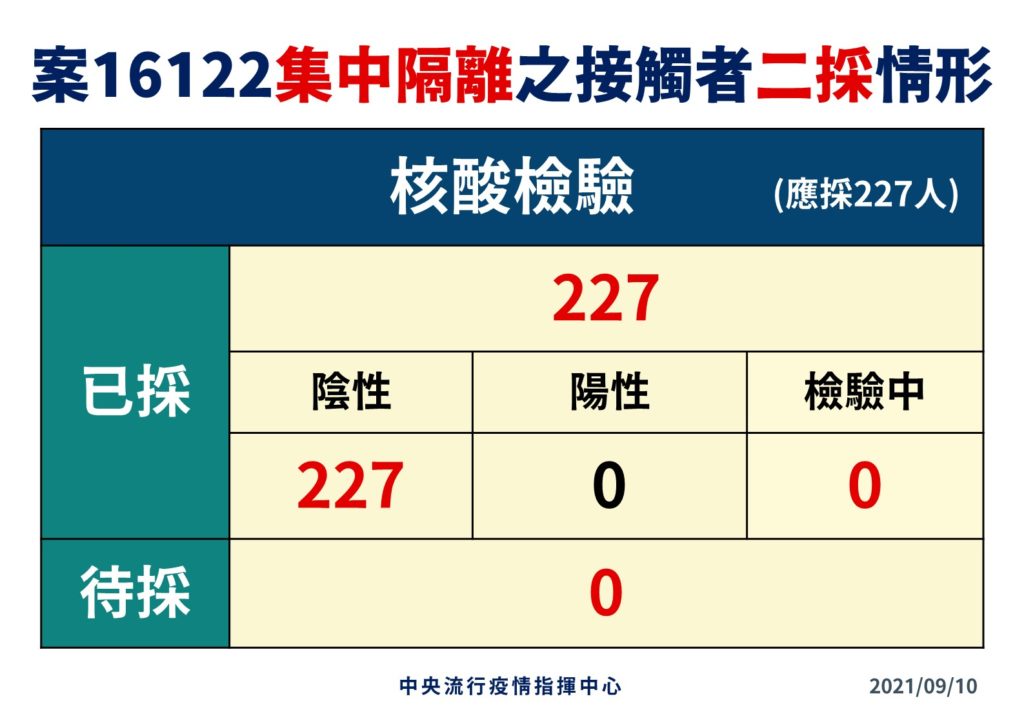 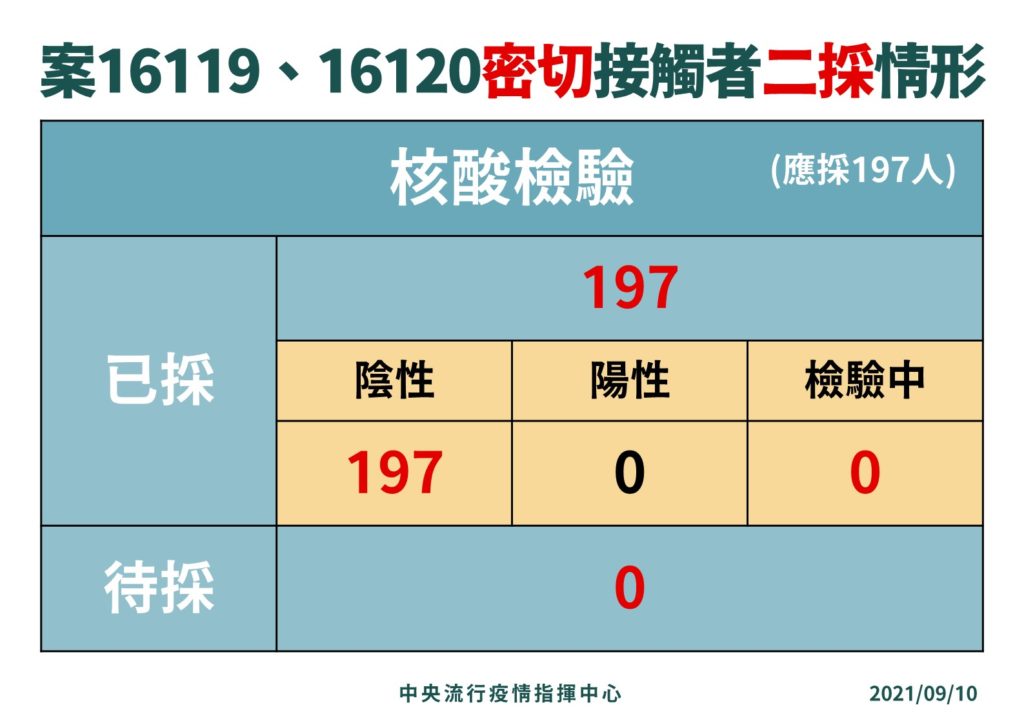 458,000 doses of AstraZeneca vaccines from purchases by Taiwan will arrive this afternoon. 870,000 AstraZeneca vaccines are currently available, bringing the amount of AstraZeneca that Taiwan has on hand to 1.31 million. 1.85 million BioNTech vaccines are available. With many that were vaccinated with Moderna close to reaching ten weeks after vaccination, the CECC will report on when shipments arrive. 700,000 of Taiwan’s initial stock of 800,000 Medigen vaccines have been used up, so 100,000 Medigen vaccines are available. Chen stated that individuals that are qualified to receive vaccines may receive leftover BioNTech vaccines.

295,212 were vaccinated yesterday, bringing coverage to 46.62% which is 50.96 per 100. By 1 PM today, 570,000 had made appointments to be vaccinated. The uptick in vaccination may be due to concerns about the Delta variant or because more young people are eligible to be vaccinated now. Chen emphasized sufficient supply, when questioned about some areas having filled up their vaccination appointments.