THE CENTRAL EPIDEMIC Command Center (CECC) announced 78 new domestic cases of COVID-19 and one imported case today, along with six deaths. The CECC states that it expects deaths to decline going forward, seeing as deaths were reflective of earlier periods in the outbreak, after which medical capacity stabilized. Of 12,806 people quarantined, 8,807 have been released, or 63%.

CECC categorizes greater Taipei as a high-risk area, while medium-risk areas are Keelung, Taoyuan, Miaoli, Changhua. Taichung was previously categorized as medium-risk, but is now at low-risk. 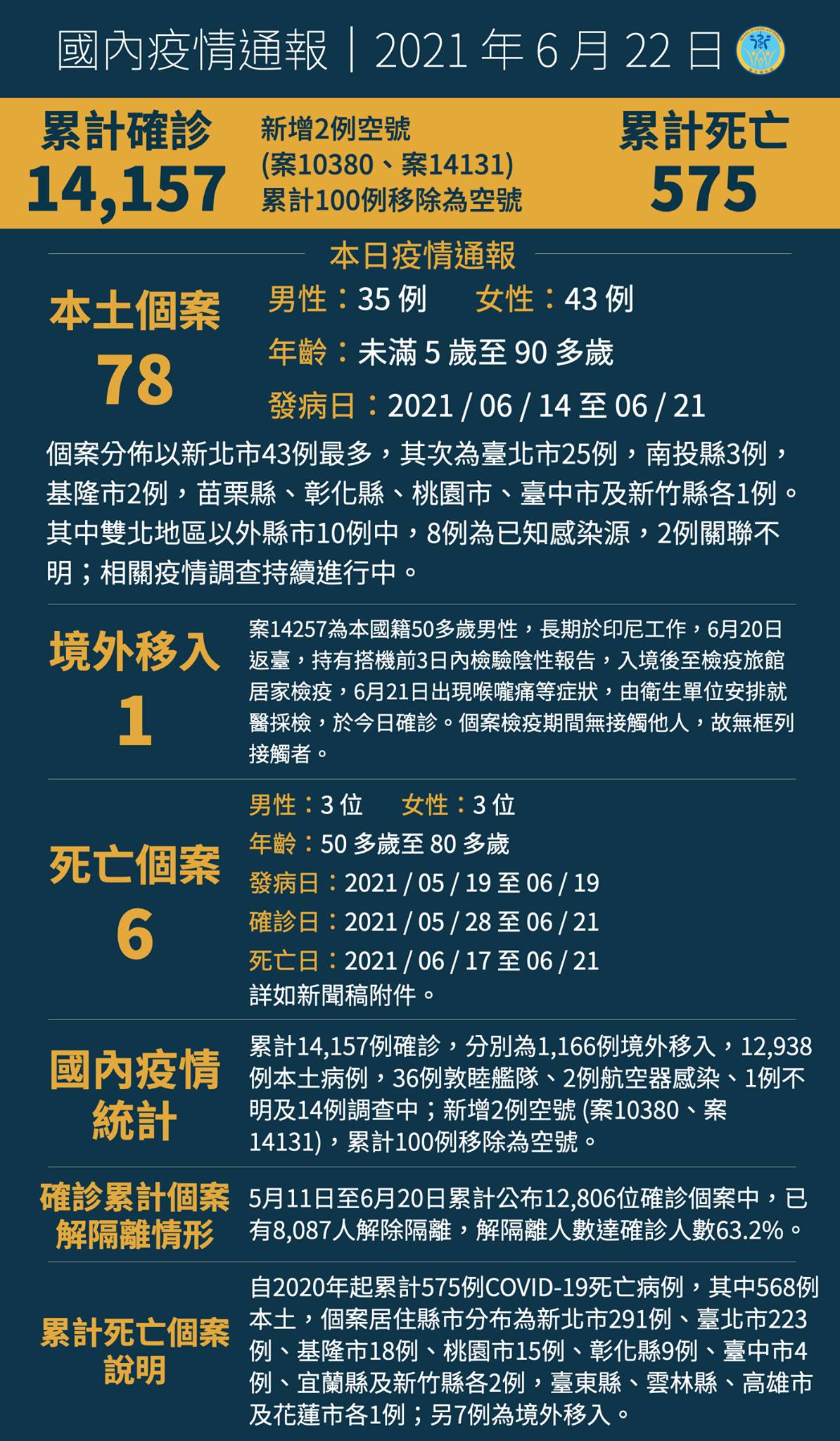 The CECC has consulted with local governments regarding the current level three alert status and is expected to announce what the policy going forward will be tomorrow around noon. The general view from local governments seems to be to maintain measures on a national basis, rather than classifying some areas in Taiwan as medium-risk and others as high-risk.

New policies will be rolled out to PCR test individuals entering Taiwan one day before they are released from quarantine, or all close contacts of COVID-19 cases. These will be publicly paid for. With 5,000 in quarantine and 7,000 to 8,000 in home quarantine, it is expected that this may be 1,000 tests per day.

Premier Su Tseng-chang has announced that categories eligible for vaccination will expand in July. This will include delivery workers, such as Uber Eats and FoodPanda drivers, taxi drivers, truck drivers, bus drivers, teachers, proctors of national exams, workers in childcare institutions, and workers at traditional markets. These categories are a total of 500,000 people.

The CECC has announced some shifts in vaccination eligibility, then, broadening some categories. Taxi, truck, and bus drivers are included in vaccination because they travel between different parts of Taiwan. Teachers, proctors, and workers in childcare institutions are included because they encounter people not currently included in vaccination groups as part of their work, and it is feared that they could potentially pass on COVID-19 to them. Moderna vaccinations were opened up to pregnant women, in light of that categories one to three have already been allowed to be vaccinated for some time. Schools are not in session, but measures to protect children will be rolled out when schools are opened again.

A new wave of Moderna vaccines from recent shipment will be distributed on July 1st. Vaccine allocation will be on the basis of the distribution category five personnel in different cities, as well the number of first dose vaccinations for Moderna in different cities. Nevertheless, one expects local governments to accuse the central government of lacking transparency in vaccination, as occurred many times during the outbreak to date.

Today, Kao stated that she would resign from her position if she was found to have any personal relations with Dianthus, or to have actively contacted Dianthus. The Taipei city government has struck back, claiming that Kao contacted them at least five times requesting vaccines for Dianthus.

Concerns continue regarding the cluster of cases at the Taipei Agricultural Products Marketing Corporation (TAPMC), which handles 1/3rd of fruit and vegetable distribution for Taiwan as a whole. Though the past week has added seven cases, there have been 45 cases there since May. A Liberty Times report today states that there were still crowds on-site this morning and that the Taipei city government is declining assistance from the central government.

With Ko Wen-je vaccinating workers at TAPMC, the CECC stated that vaccinations should take place early on in case of illness with COVID-19 in order to be effective. The CECC has stressed that vaccines are a preventative measure for COVID-19, rather than a treatment measure. At the press conference today, the CECC also stressed that contact tracing remains of key importance in fighting COVID-19.

Ko Wen-je may otherwise try to push back against the CECC about vaccination categories in the future. With fears of wasting vaccine doses, Ko has suggested that family members of medical personnel could be vaccinated.

According to New Taipei mayor Hou You-yi, 59% of cases still are transmitted between families. 7% of cases are of unknown origin. Hou also stated that he did not see the conditions for lifting level three being met, with the possibility of COVID-19 returning in waves, the threat of the Delta variant of COVID-19, and insufficient vaccination.

Five brands of home test kits for COVID-19 testing will soon be available, consisting of four imported brands and one domestic brand. The different brands have different prices, but primarily cost around 1800 NT, with one brand costing 315 NT per dose.

Different standards for antibody testing and difficulties integrating these standards have led to delays rolling out changes to the quarantine period for pilots. As such, some pilots have been made to return to a quarantine schedule involving three days of quarantine, followed by eleven days of self-health monitoring.

There have been reports of delays with foreigners applying for subsidies for children with Taiwanese nationality, as part of childcare subsidies rolled out by the Executive Yuan. Foreigners have been asked to wait until the end of June before applying, despite present need.

Fujian prefecture, China, claims that it has found six imported cases of COVID-19. The CECC has stated that it has requested more information from Fujian about these cases.

The KMT continues to attack the DPP regarding delays in vaccines arriving in Taiwan. Only 1.2% of the AstraZeneca vaccines that Taiwan has ordered have arrived, while only 3.7% overall have arrived. To this extent, the KMT has denied ever calling for the purchase of Chinese vaccines, though party members including the head of the Sun Yat-Sen School, Chang Ya-chung, and former chair Hung Hsiu-chu have done so. 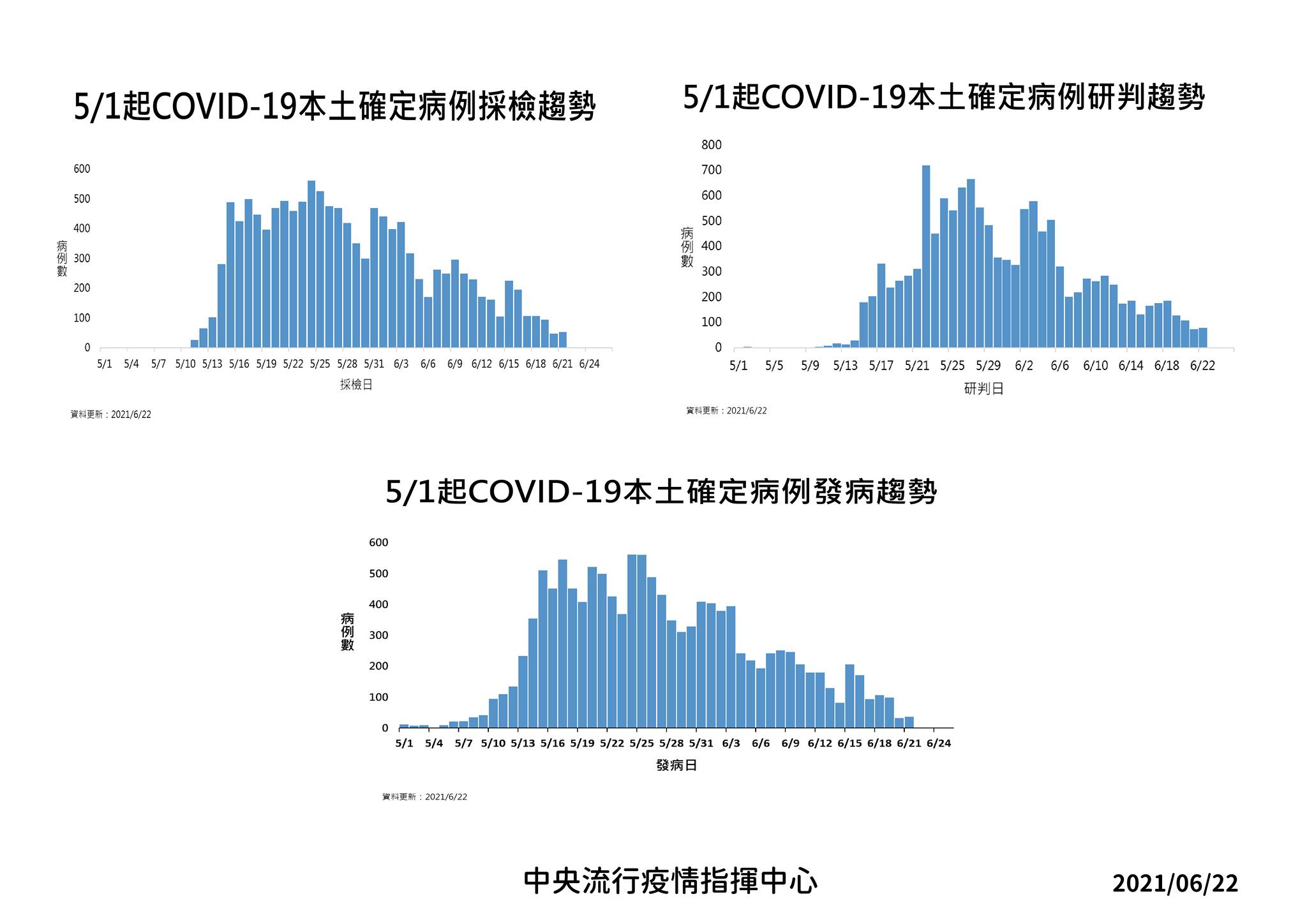 To this extent, Taiwanese media continues to report on the AstraZeneca vaccine as though it causes sudden deaths. In a notable example, ETToday reported on AstraZeneca as though it and other vaccines cause cancer.

35 deaths were reported after vaccination today by the CECC, who were 41 to 94 years old. 25 of these cases were above 75 years old, while three were below 50. Nine were on dialysis, twenty-two of these cases had long-term conditions. The CECC maintains that there has been no proven link between vaccinations and deaths.

With declines in the number of people being vaccinated, the CECC will not block people that fail to arrive for their vaccination appointments from being vaccinated in the future

The CECC is hoping for more vaccines to arrive in July, in accordance with the originally announced schedule for vaccines arriving in Taiwan, but this is difficult to anticipate. With TSMC and FoxConn hoping to purchase ten million BioNTech vaccines, the CECC has stated that this is a special case that they hope to quickly take care of. If too many other non-government groups try to purchase vaccines, this may create complications.