39 DOMESTIC CASES and one imported case were imported at the Central Epidemic Command Center (CECC) press conference today. Nine deaths were also announced. There were 14 cases each in Taipei and New Taipei, as well as 11 cases in Taoyuan.

As such, Minister of Health and Welfare Chen Shih-chung stated that the cases today did not represent a significant one-day uptick. The CECC’s current evaluation of Taiwan’s Rt value is that it is .69, responding to other medical experts that have asserted that the current Rt value is .35. The number of cases of unknown origin drops by three per week, with the CECC having stated yesterday that the number of cases of unknown origin is under ten per day. 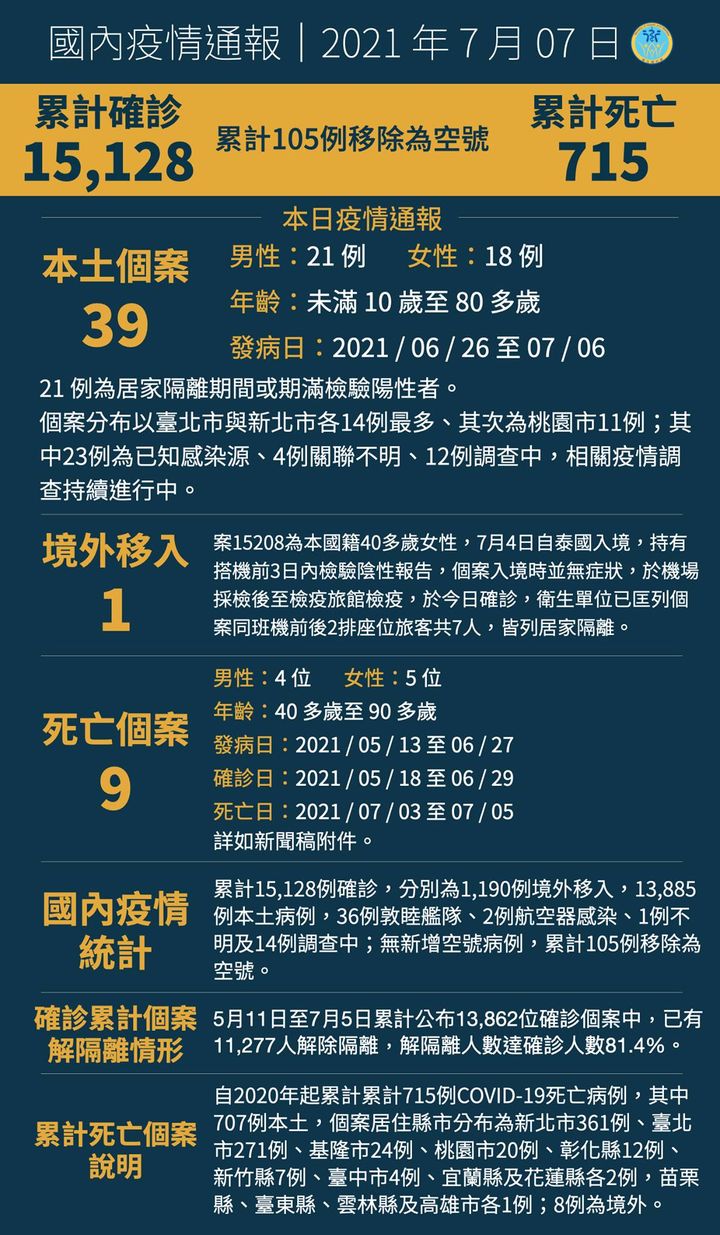 There are no new cases linked to the Delta variant cluster in Pingtung. Another round of testing will be carried out for the Fangliao Hospital in Pingtung from July 7th to July 13th, if tests are all negative, the hospital can return to normal operation.

Likewise, 3,000 will be PCR tested at the Huannan Market in Taipei tomorrow. Negative test results will be needed for workers to enter the market. The situation at the two markets of the Taipei Agricultural Products Marketing Corporation seems more stable now.

CECC official Chang Shang-chwen responded to criticisms of his explanation of trends in death rates at yesterday’s CECC briefing, stating that he did not mean to blame any medical workers, and that he understood the severity of deaths that have taken to date during the pandemic. Chang was accused in the media of downplaying the death rate in his comments yesterday.

Chen Shih-chung also weighed in on the continued controversy about the lowering of the quarantine period for pilots to three days of quarantine and eleven days of self-health management, something seen as having a key role in the development of the current outbreak. Chen stated that the lowering of the quarantine period went through proper processes and did not occur without oversight, though the final responsibility for the decision lies with him.

626,000 doses of AstraZeneca from Taiwan’s vaccine purchase are set to arrive today. After a week of inspection, these vaccines will be released for distribution. Japan’s donation of 1.13 million vaccines will arrive tomorrow.

A COVID-19 case of a shipping worker at China Airlines has led to three members of his family being infected. This worker was not previously vaccinated. Plans are underway to test 800 to 900 individuals working on the same floor as him, as well as to conduct vaccinations, with concerns that this could affect inspections of vaccines and lead to delays in their distribution.

1.48 million individuals in categories nine and ten have registered on Audrey Tang’s online vaccination registration system. Category nine consists of individuals between 19 and 64 who have underlying conditions while category ten consists of individuals between ages 50 and 64. Vaccinations are only being carried out in Kinmen, Mazu, and Penghu while the system is still being tested. 4,500 have registered in Taiwan’s outlying islands.

96,720 vaccinations took place yesterday. 9,447 were vaccinated using AstraZeneca yesterday, with 89,273 vaccinated from Moderna. 2,740,540 have been vaccinated so far, or close to 11.5% of the population. 12 deaths were reported yesterday after vaccination yesterday, all of which occurred after AstraZeneca vaccination. Nine of these individuals were above 75, three were living in long-term care institutions, four were on dialysis, and seven had long-term conditions. 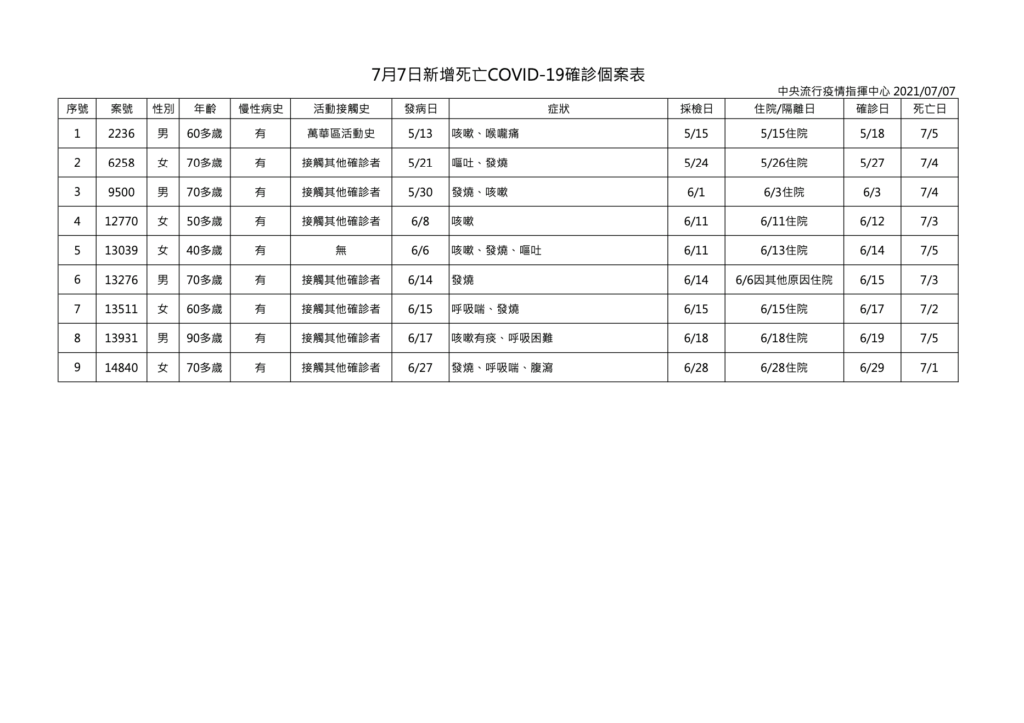 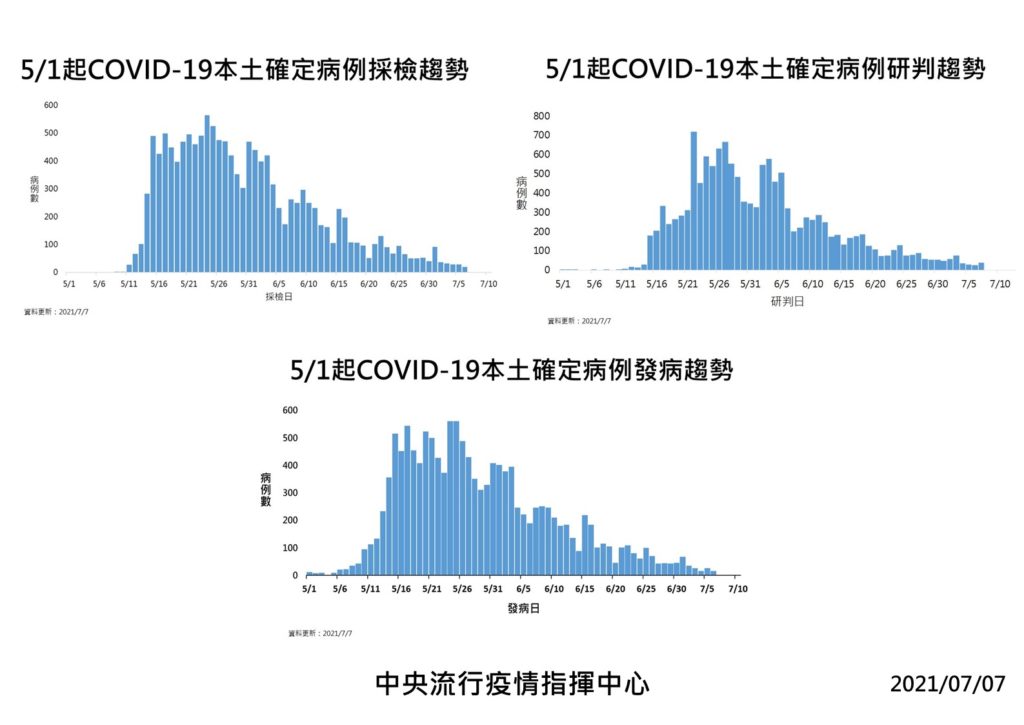 Information on the new deaths today (left) and further data released by the CECC (right). Photo credit: Ministry of Health and Welfare/Facebook

The CECC continues to plan to expand vaccination categories based on age and expects there to be fewer leftover vaccines and a decline in individuals that do not arrive for their appointments as vaccination expands. Asked about if the Delta variant of COVID-19 will require vaccinating above 80% of the population, the CECC stated that it will continue to try and purchase vaccines, as well as that it hopes that delays shipping vaccines can be resolved.

According to the Apple Daily, with the current amount of vaccines that Taiwan has purchased, including the BioNTech purchase by FoxConn and TSMC, this should allow individuals between 40 and 44 to be vaccinated before October.

The CECC does not believe there are issues with increasing the amount of time between first dose and second dose Moderna vaccinations, given supply, as well as because this can increase the effectiveness of the vaccine. Adequate supplies of vaccines will be allocated to the military.

President Tsai Ing-wen took to livestream yesterday afternoon. Apart from thanking Japan for its vaccine donation of 1.13 million vaccines, Tsai stated that she hopes to reach between 20% to 25% vaccination by the end of the month.

According to Wang Bi-sheng, the CECC official responsible for managing the TAPMC/Huannan Market cluster the Miaoli factory worker cluster before it, only conducting repeated rounds of PCR tests will not be sufficient to manage the situation there. As such, Wang has called for further measures during meetings with city government officials including Taipei mayor Ko Wen-je and deputy mayor Huang Shan-shan.

Lion Travel has reported that all 439 seats for a travel package to Guam to be vaccinated, which lasts for a total of five days and four nights, have been sold out. As the package costs between 40,000 NT and 50,000 NT, with quarantine fees included, this is a total of 150,000 NT. Most who have booked the package are below 50.

Unemployment has reached the highest in 7.5 years, with unemployment climbing to 4.11% in May. 86,000 jobs have been cut in the service industry, with 489,000 unemployed, an increase of 12.35% since May. One can expect further jobs to have been lost since May.

New Taipei mayor Hou You-yi called for Taiwan being allowed to enter the WHO today, when asked about international aid to Taiwan from Japan and the US.

Ko otherwise attacked the CECC over the issue of lowering quarantine periods for pilots, claiming that reducing quarantine periods was an incorrect idea that any doctor would have opposed, showing that this means no medical experts were present at the meeting where this was decided. This goes against the CECC’s claims that it was involved in the decision to lower quarantine periods. Taipei city officials also attacked Freddy Lim over his criticisms of low vaccine allocation to Wanhua, one official claiming “I do not know if Lim is from Wanhua, but he does not understand local conditions in Wanhua.” Taipei city officials defended vaccine allocation to Wanhua by claiming that Zhongzheng is integrated with Wanhua and that vaccine distribution to Wanhua should not be evaluated in an isolated manner. 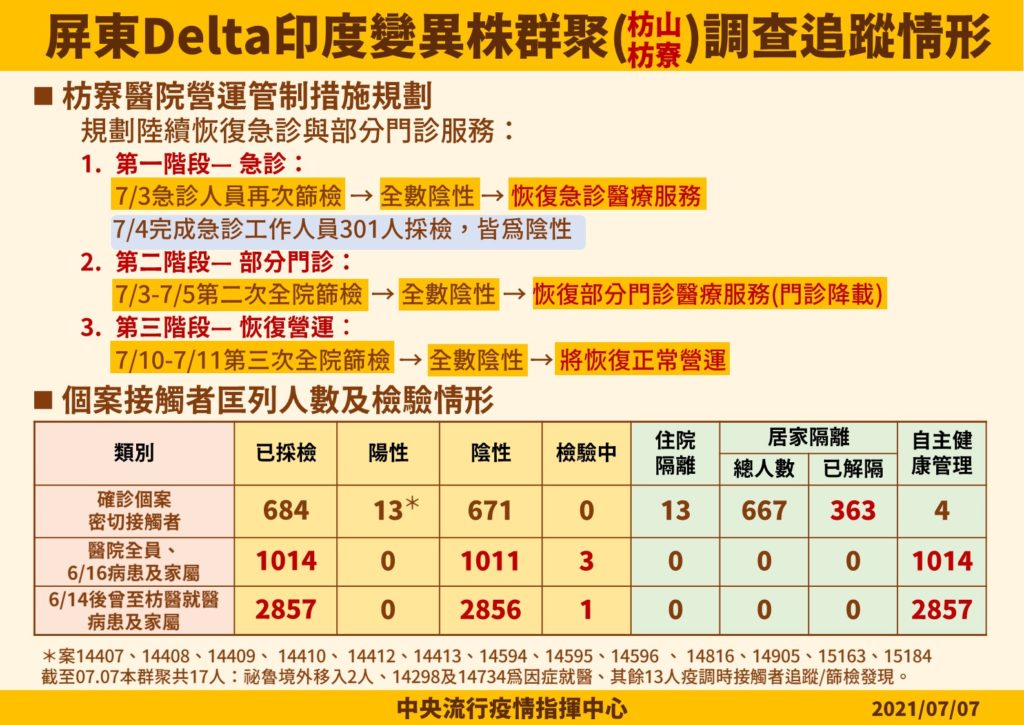 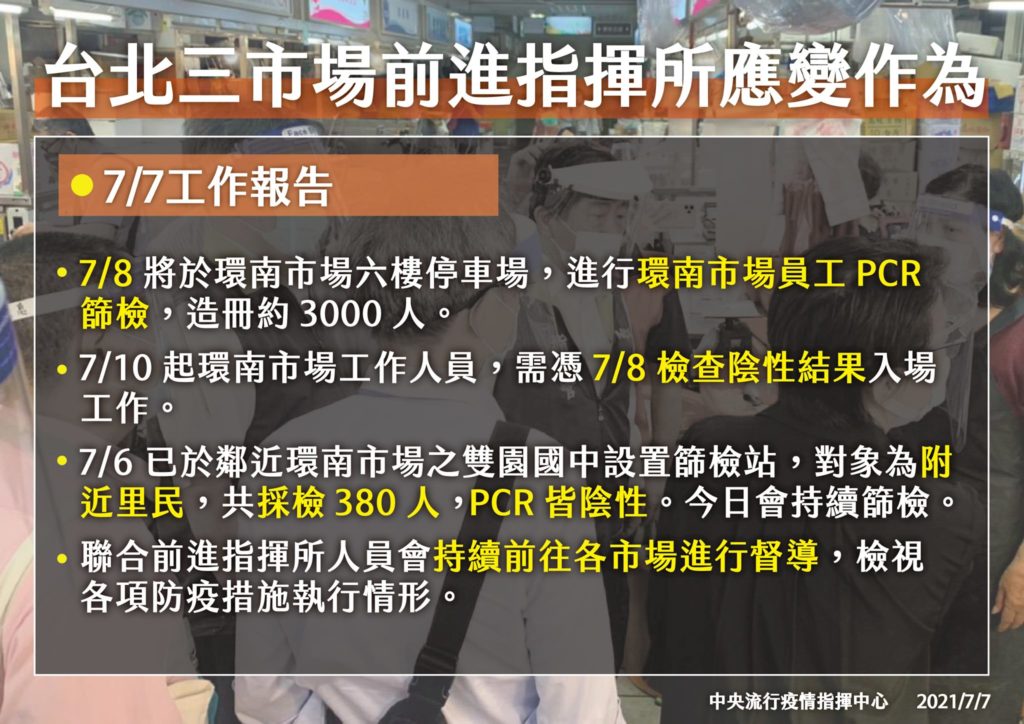 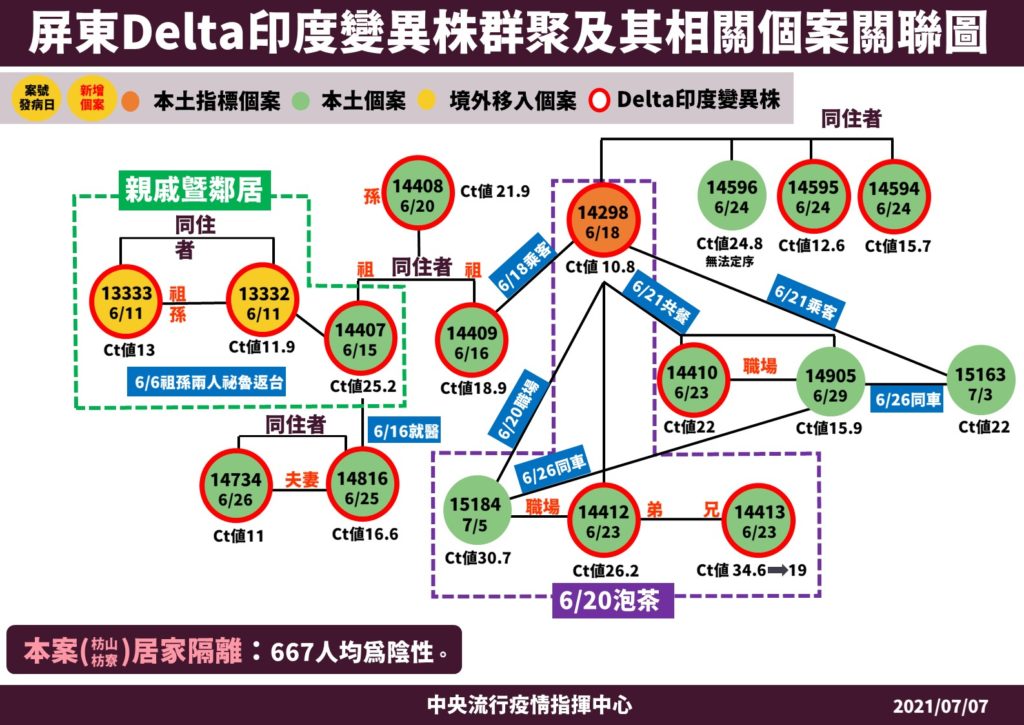 Information on measures and testing at Wanhua markets and in Pingtung, as well as the contact tracing map for the Pingtung Delta variant cluster. Photo credit: Ministry of Health and Welfare/Facebook

The KMT has called for prices for electricity and gas to be frozen, to prevent inflation in prices for other goods.

When asked about poor performance for Taiwan’s “normalcy rating” in The Economist, the CECC states that this is evaluating the last month of the outbreak, and it expects Taiwan’s ratings to return in the future. Part of the normalcy rating is based on the number of flights available and last month saw many flights canceled.

Domestic vaccine manufacturer Medigen has applied to carry out phase three trials in Paraguay, with the aim of entering the Latin and South American markets. Other phase three trials are planned to try and enter the European market.

With concerns that the national referendum now rescheduled to December could prove an occasion for the spread of COVID-19, the NPP has announced support for a KMT proposal allowing for absentee voting. The Central Election Commission previously stated that a draft bill on absentee voting will not be ready in time for the referendum. Voting is expected on the issue today, with parties having failed to arrive at a consensus yesterday.

The CECC did not make any announcement on whether it had decided to lift the level three alert, stating that it was still evaluating the situation. However, Chen Shih-chung stated that businesses can begin to prepare for relaxation of measures.