Tsai Announces Return of Military Conscription to One Year

PRESIDENT TSAI ING-WEN today announced the extension of the military draft to one year from the current four months at a press conference that began at 3:30 PM. This took place after a meeting between Tsai, the National Security Council, Vice President William Lai, Premier Su Tseng-chang, Minister of Defense Chiu Kuo-cheng, and members of the DPP legislative caucus earlier this month. The announcement was expected in advance, with details of the plan reported on earlier this afternoon.

In her comments, Tsai began by raising the current war in Ukraine, emphasizing that Ukrainians had been resisting Russia for over three hundred days but that its will to fight was not broken. Tsai suggested that Ukraine’s capacity to resist was tied to its sufficient military preparedness, allowing it to buy time and allow for the assistance of other countries. To this extent, Tsai raised China’s live-fire exercises around Taiwan in August, which took place after US Speaker of the House Nancy Pelosi’s historic visit to Taiwan, as the first Speaker of the House to visit Taiwan in 25 years. The live-fire exercises took place closer to Taiwan than during the Third Taiwan Straits Crisis. Recent days have again seen an uptick of Chinese military activity around Taiwan in response to US legislation supportive of Taiwan’s military.

Live-stream of the press conference

The extension of the draft will be based on birth date, lengthening the draft to one year for males born following January 1st, 2005. Those born previously will continue to be on a four-month track for military conscription, though numbers of those on the four-month track will decrease in the next six years and there will gradually be more conscripts on the one-year track. The new conscription period will start in one year and plans would be rolled out in consultation with the Ministry of Education.

As part of the extension of the draft, the salary for conscripts will be increased from the current 6,510 NT to 20,320 NT, which will include meals and insurance. Tsai stated that this aims to ensure that conscripts do not suffer financial burdens from their conscription period, while also assisting them to pay for tuition. Conscription periods can also count toward pensions,

The training period will be 44 weeks long. This will begin with eight weeks of practical training, civil defense, and firearms training, 18 weeks of encampment training, seven weeks of specialized training, 13 weeks of base training, and six weeks of joint training. Draftees will be sent to different assignments based on specialized skills they may have. Tsai seemed to suggest an emphasis on asymmetric means of warfare during the press conference, such as use of rockets and drones.

Indeed, Tsai stated that while military training was seen as useless in the past, leading many to not want to undergo conscription, she aimed to change this. That being the case, she stated that she hoped for reasonable discussion from opposition parties and civil society groups, emphasizing that she believed in the shared desire of all to protect Taiwan, and her aim was to avoid the sacrifice of Taiwan’s young.

The Ukraine framing continued in a presentation by the Ministry of National Defense after Tsai’s comments. The presentation emphasized China’s expansion of its power overseas, not only in the Indo Pacific, but also in the Middle East and Africa through the Belt and Road Initiative. The presentation likewise called attention to military exercises by Russia aimed at intimidating Asia Pacific countries such as Japan. As such, the issue was framed as that of military threats facing democratic countries, as not simply a matter confined to the Asia Pacific.

In particular, the Ministry of National Defense presentation sought to situate the increase in conscription period in line with global trends, citing increased defense spending by Japan, the Philippines, Australia, and European Union. Taiwan’s current four months of conscription was stated to be too short for firearms and self-defense training, particularly when compared to 24 to 30 months in Israel, two years in Singapore, and 18 to 21 months in South Korea. The reserve system would also be intensified in order to maintain readiness. 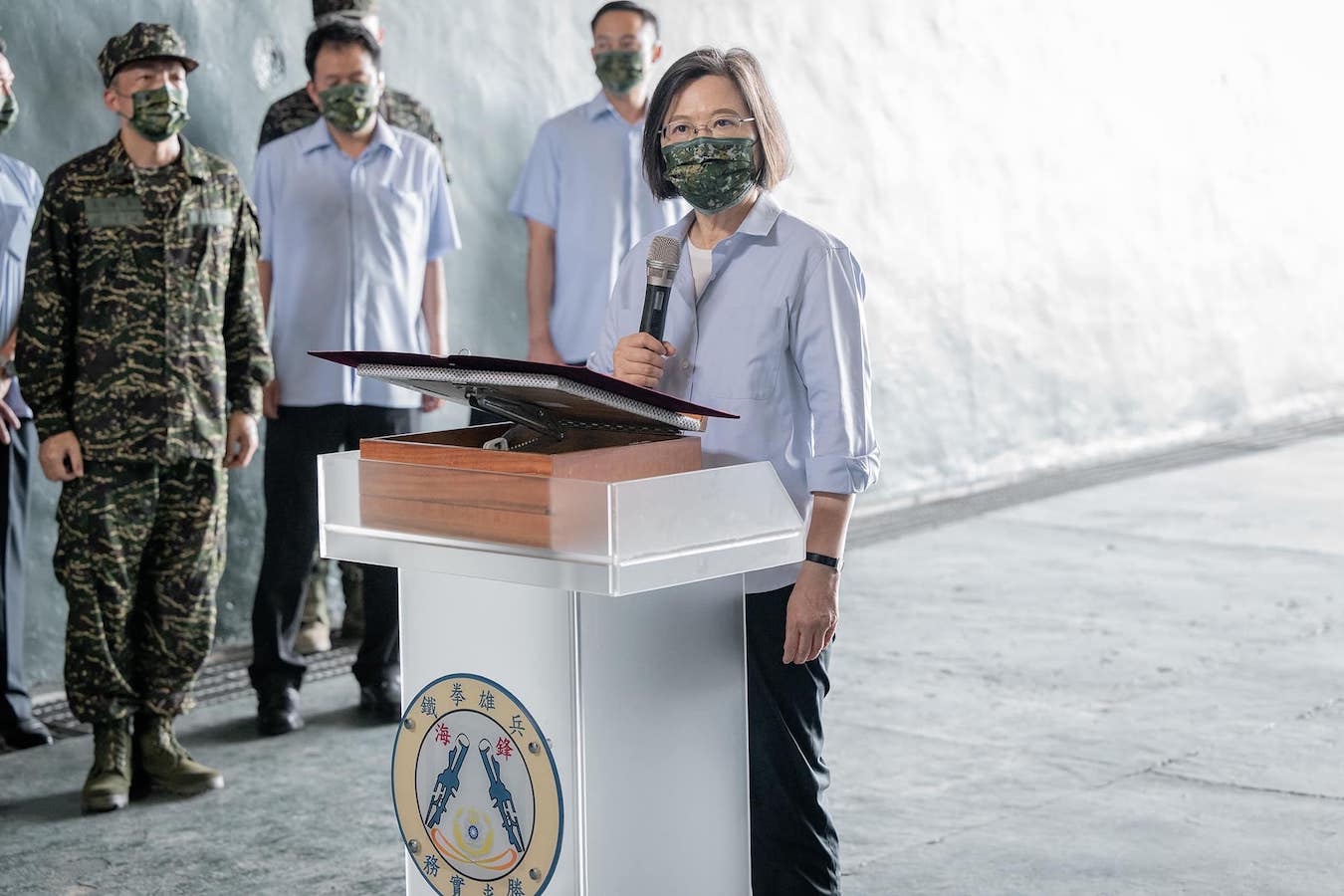 The presentation’s framing also emphasized the role of civil defense and how in wartime, it was the responsibility of civilians to maintain the stable operation of society. This would be in terms of power, water, food supply, and transportation. There would be a division of labor between professional soldiers with greater fighting capacity and conscripts.

In the Q-and-A section of the press conference, Tsai was asked about the timing of the announcement, as to whether the DPP delayed on the announcement for fear that this would affect elections–or that this could affect the DPP’s next presidential candidate. Tsai was also asked if the decision was made due to American pressure. Tsai denied this, while also declining to provide details on cooperation with other countries. When asked if the lengthening of the conscription period was intended to send a message to China, Tsai stated that this was intended to convey preparedness.

When asked about the possibility of female conscription, Tsai stated that more than 10% of the voluntary military was women, and that this would be considered. However, Tsai stated that it would address issues one at a time, and so the government was more focused on lengthening the current conscription period.

Males in Taiwan have historically had to serve two to three years in the military, after the KMT came to Taiwan. This was decreased to one year in 2008 and reduced to only four months in 2013 during the Ma administration, with the military turned into a mainly volunteer force.

Tsai’s actions, then, can be seen as undoing those of the Ma administration. The Ma administration was a period in which the KMT sought to advance policies aimed at bringing Taiwan closer to China, including the signing of trade agreements as the CSSTA, which would have allowed Chinese investment in Taiwan’s service sector industry–this, however, led to significant backlash in the form of the 2014 Sunflower Movement. Reducing the conscription period may have been another gesture by the Ma administration aimed at facilitating closer political and economic relations between Taiwan and China.

It is significant to see Ukraine brought up as the primary rationale for lengthening the draft period, rather than the nearer-at-hand live-fire exercises that China conducted around Taiwan in August. Taiwanese society primarily did not react to the live-fire exercises, perhaps having become inured to Chinese threats over past decades, and discussion of lengthening the draft picked up in intensity after the invasion of Ukraine–with Ukraine serving as a proxy issue that repackaged Taiwan’s longstanding concerns about military threats from China.

Live-stream of the KMT press conference responding to the announcement

The DPP was seen as having a rare window of opportunity to push for extending the draft after the invasion of Ukraine that it might not have otherwise had during the Tsai administration’s tenure. Yet it is also possible to view China’s live-fire exercises as a form of overreach in this way, in granting further political impetus to the Tsai administration for lengthening the draft. In this way, this proves a way in which Chinese military threats directed at Taiwan may intend to frighten Taiwan into submission, but sometimes have the opposite effect.

Opposition parties such as the KMT and NPP have so far reacted by suggesting tentative support for military reform, but calling for effective measures that can strengthen national security, rather than the past bureaucratic inertia. The KMT response is noteworthy in that the present political environment probably does not allow it to take a stronger stance against military reform efforts by the Tsai administration, but it is to be seen if members of the KMT eventually begin to attack the lengthening of the conscription period, and what discourse they use as part of such attacks.