Cases Drop to Below 100 for First Time Since Start of Outbreak, With 75 Reported Cases

CASES DROPPED to below 100 for the first time since the current outbreak started today, with 75 cases announced by the Central Epidemic Command Center (CECC) at its daily press conference today. There were no imported cases.

38 cases were in New Taipei, with 22 cases in Taipei. There were five cases in Taoyuan, three cases in Miaoli, two cases in Taichung and Keelung, and one case each in Changhua and Kaohsiung.

20 deaths were also announced. The CECC stated that these cases are primarily linked to the state of the outbreak in May, with an average of 17 days between the onset of symptoms and death. Two cases were in their fifties. 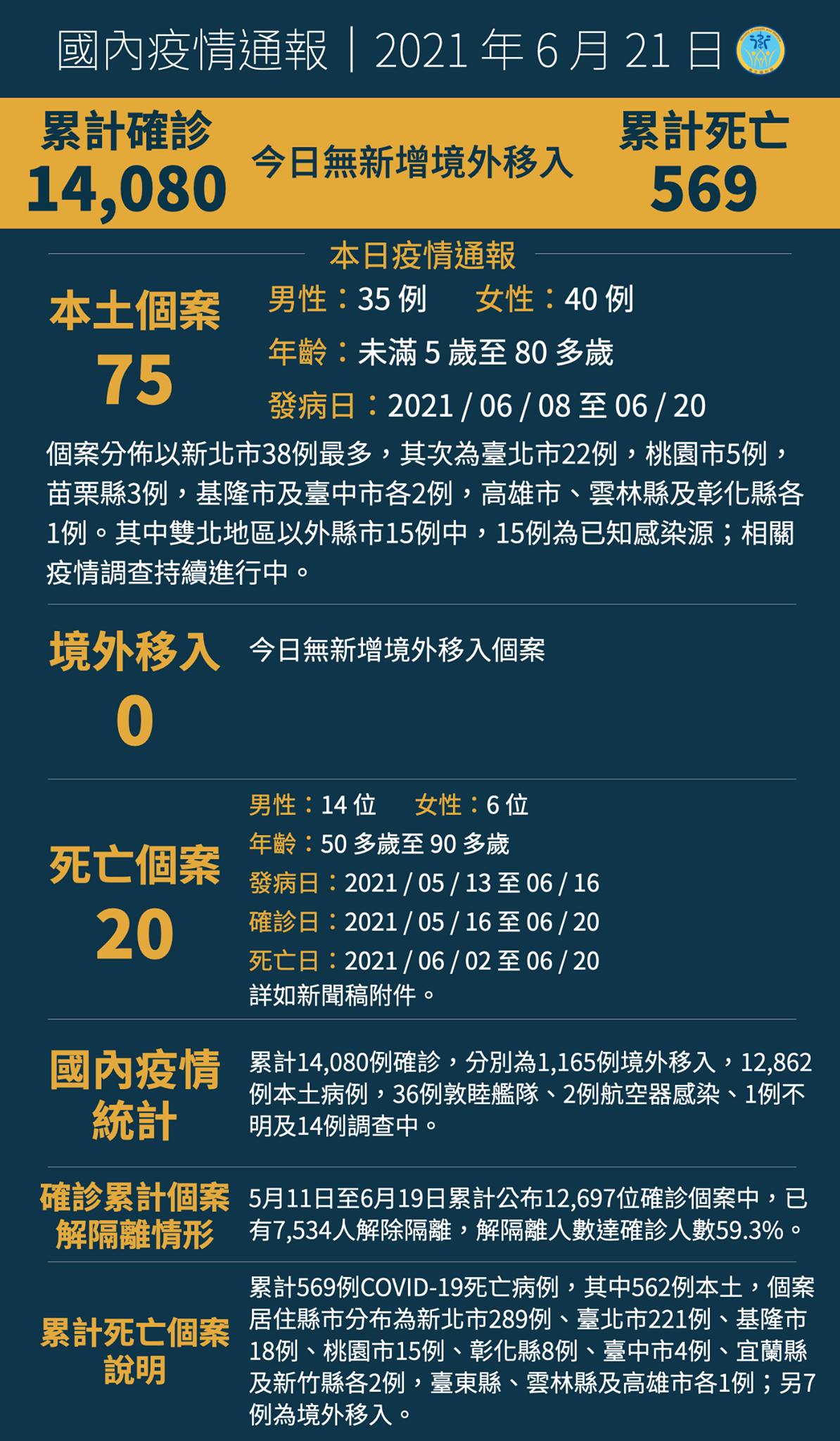 60% of cases to date have been released from quarantine. There are currently 1,893 occupants of specialized wards used for treating COVID-19, down 25% from the peak of 2,539 on June 4th. In greater Taipei, which has most heavily been hit during the outbreak, this is down 17% to 1,350 cases from the peak of 1,632 cases on June 4th.

The clusters among factory workers in Miaoli are thought to be primarily under control. There were a total of 471 cases at eight factories, with 15% of cases being Taiwanese, or 71 individuals, and 85% of cases, or 400 migrant workers, infected. King Yuan had 342 cases, while there were 82 cases at the second most affected factory, then 22 cases, 17 cases, and less than five at other factories.

26,250 were tested in connection to the Miaoli clusters. The case is thought to have limited effect on the community, as cases in Miaoli outside of the factory were more commonly linked to Wanhua, not the cluster.

The CECC, which worked with the Ministry of Labor, Ministry of Economic Affairs, and local government, has touted its approach of dividing workers into risk groups for quarantine and testing as successful. Workers in the high-risk group were not allowed to enter the factory and all groups saw follow-up testing. 130 of 1,705 workers in the high-risk group or 9.4% later tested positive, while 44 were found in the medium-risk group. 2 were later found in the low-risk group in follow-up testing.

Spread seems to have primarily occurred among workers when they were eating, not while they were working. That being said, the CECC will not rule out work stoppages, and so it urges factories to divide up work shifts and allow for social distancing measures if they do not wish to see work stoppages. Migrant worker dormitories have been urged to maintain social distancing measures as well, along with regular health checks for migrant workers—though this is primarily aimed at factory workers, this applies to migrant worker dormitories for other migrant workers, as well. The CECC also urges the eventual vaccination of migrant workers.

A Taiwanese man who tested positive for COVID-19 in Macau, with the more infectious Delta variant—not seen in Taiwan in domestic cases to date—is thought to have picked this up due to travel in India and Vietnam. This man had three negative COVID-19 test results before testing positive after arriving in Macau and has been accused of hiding his travel history to India. 21 contacts of his have tested negative for COVID-19. As all cases of the Delta variant have been imported to date, it is feared that this case may lead to the spread of COVID-19 domestically in Taiwan.

Pregnant women have been added to category 6 for vaccination, along with individuals above 65. The CECC also currently takes the stance that there is insufficient proof about the effectiveness of mixing AstraZeneca and vaccine testing. The CECC believes that current apps are sufficient for COVID-19 vaccine distribution, with an average extraction of 10.5 doses per bottle and up to 12 doses, which is high—though there are concerns from the public about vaccines being wasted, with six people required to open a bottle. The CECC has suggested that back-up lists be set up in case there are leftover doses. 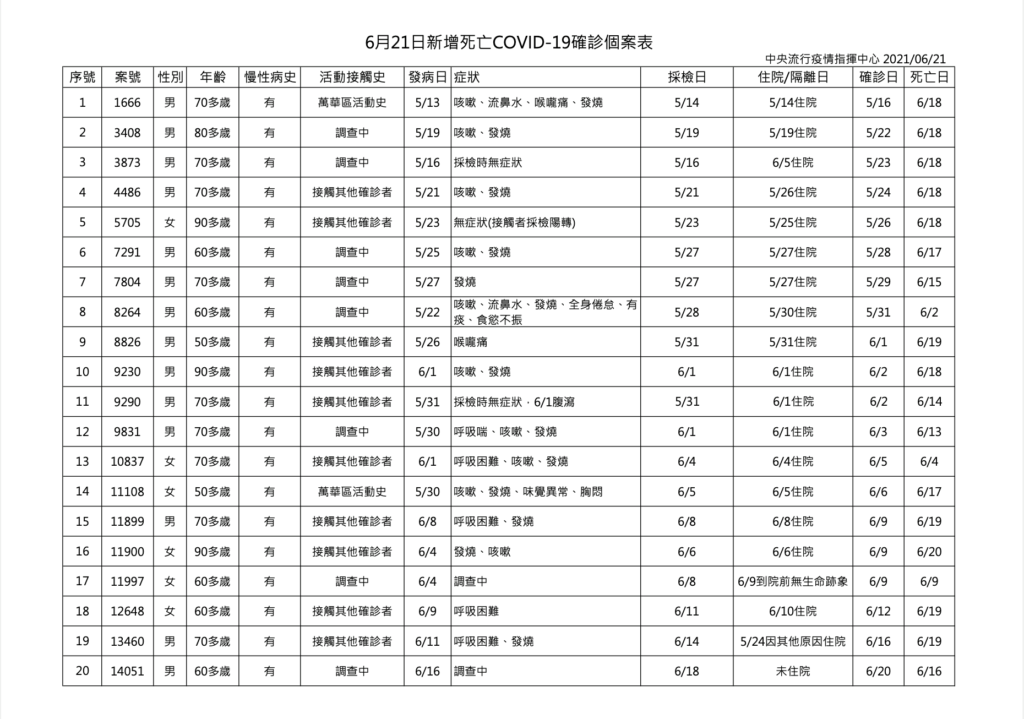 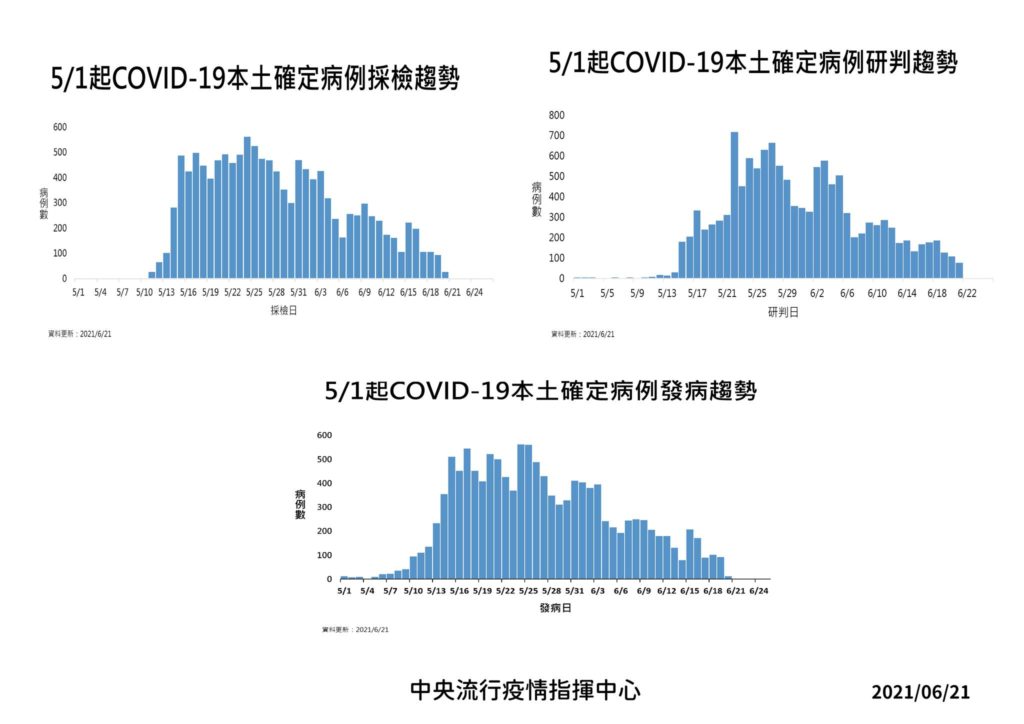 Data on the new deaths reported today (left) and further data released by the CECC (right). Photo credit: Ministry of Health and Welfare/Facebook

A confirmed case in Yilan that disappeared and was unable to be contacted by authorities has been found in Taipei. The man in question, a sixty-year-old man, will be fined between 60,000 to 300,000 NT for violating Article 43 of the Communicable Disease Control Act.

The Taoyuan city government is currently vaccinating airline workers at risk of being exposed to COVID-19, as a priority group necessary to keep the nation running.

A cluster at the Military Taoyuan General Hospital has expanded now to fourteen individuals, including both workers at the hospital and patients. The hospital will not be accepting new patients until Friday and more than 1,300 will undergo second-round testing in connection with the hospital.

There is increased speculation that Chia Yong-jieh, the entertainer that organized a donation drive to purchase High Flow Nasal Cannula machines from the public, may enter politics. After the donation drive, Chia received a call thanking her from President Tsai Ing-wen.

According to polling conducted by the KMT, 75% of the public does not view economic relief subsidies released by the government as doing enough. This includes 67% of DPP supporters, 72.9% of swing voters, and 74.8% of young people. As such, the KMT has called for doubling the number of subsidies available.

Taichung mayor Lu Shiow-yen has called for the vaccination linzhang, or neighborhood chiefs, in addition to lizhang, or borough chiefs. This has led to pushback from the central government, which is conducting vaccination of lizhang, but not linzhang. Tainan mayor Huang Wei-cher added to the debate in past days by indicating that he supports the vaccination of linzhang, as frontline medical workers, and rolling out vaccinations for them.

Since May, 45 cases have been found positive for COVID-19 at the Taipei Agricultural Products Marketing Corporation (TAPMC) in Wanhua, which handles vegetable and fruit distribution for 1/3rd of Taiwan as a whole. Two cases were reported on June 14th, while 7 new cases were reported on June 20th, but there has been sudden focus in news reporting on that there have been 45 cases at TAPMC since May in the past day.

Information on measures for migrant workers. Photo credit: Ministry of Health and Welfare/Facebook

More than 22,000 pass through the market daily. With new cases in the past days, between 3,000 and 4,000 workers will be tested in the upcoming week. New Taipei mayor Hou You-yi has urged a rapid response to the incident, given transportation and logistics links between TAPMC and fruit and vegetable markets in New Taipei. More generally, TAPMC has strong links to all of Taiwan. Contact tracing for the TAPMC cluster thus includes fruit and vegetable centers outside of Taipei.

In the same timeframe, there have been 47 to date positive test results at a long-term care institution in Shilin, with three deaths having taken place there. This is 16 workers and 32 residents. To date, there have been cases at 85 long-term care facilities, including 86 workers and 253 non-workers, 179 workers to date have been quarantined. After the two clusters in Taipei, Taipei mayor Ko Wen-je has been widely criticized online because of Ko previously announcing that he was hoping to swiftly reopen the city, particularly after criticisms from influencer Brother Caramel. As the cases in Taipei are not significantly higher than in past days, except for concern regarding the significant links between TAPMC and other parts of Taiwan, part of the large reaction to today’s cases is probably bloodletting against Ko for his apparent rush to re-open in the past days.

Notably, Taipei mayor Ko Wen-je has stated that he hopes to vaccinate the 4,000 or so workers at the TAPMC instead of subjecting them to weekly tests. Vaccinations will take place within two or three days, with a testing site also set up at TAPMC.

The CECC stated today that it does not disapprove of these measures, but warns that vaccines are a preventive measure for COVID-19, not a treatment measure. This measure will use up 10% of Taipei’s current stock of vaccines. It is possible that Taipei is hoping to do this in order to maintain the operation of TAPMC, otherwise Ko is likely looking for policies to try and distinguish his policies from measures by the central government. As it is still possible to pass on or become infected COVID-19 despite being vaccinated and it takes time to be fully vaccinated with two doses, these individuals likely will still have to be tested. 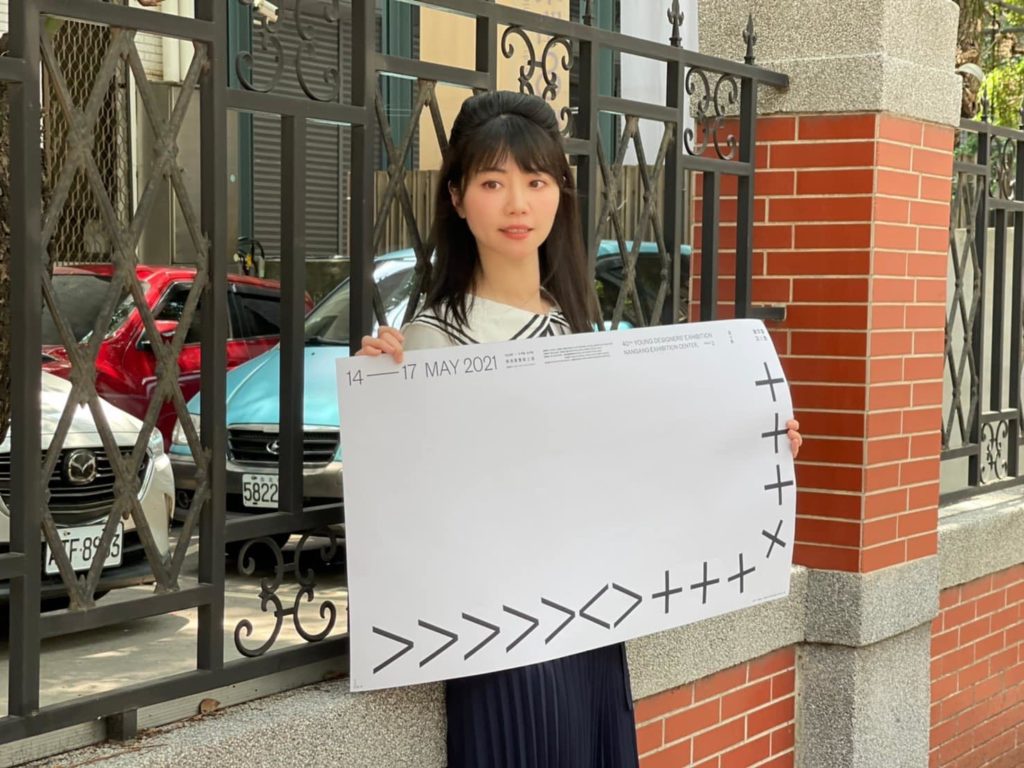 Due to fears in the media that the AstraZeneca vaccine produces sudden deaths, this has led to visible declines in vaccination in Kaohsiung,. According to Kaohsiung mayor Chen Chi-mai, vaccination is down 30% to 40% in the past two days, with some test sites that previously reported 8,000 vaccinated per day now seeing 3,000 visitors. Taipei mayor Ko Wen-je stated that while 98% of individuals between 80 and 85 who had vaccination appointments arrived at their vaccination, this declined to 79.08% on Friday, though this rebounded to 91% and 96% on Saturday and Sunday.

27 new deaths were reported after vaccination today, though the CECC stressed that no link has been shown between vaccinations and sudden deaths. Over 200 individuals above 70 die per day. The CECC will announce statistics for deaths after vaccinations on Tuesdays and Thursdays. As media questioning of the CECC about these deaths seems unavoidable, the CECC has probably decided to take this approach to avoid public distrust and accusations of covering up deaths.

The CECC has stated that it is currently evaluating options regarding the COVID-19 alert status, with level three set to last until next Monday. The CECC is keeping in mind the level three criteria of three cluster infections per week and ten domestic cases from unknown sources in a day in deciding this.