The new case was a disinfection worker in the Taoyuan International Airport, as a result of which the case is in Taoyuan. This new case was found due to testing requirements as part of work and previously tested negative on September 7th. Contacts from September 8th onward have been quarantined, including family, co-workers, and other contacts. This is a total of 45 contacts. Contact tracing is under way. 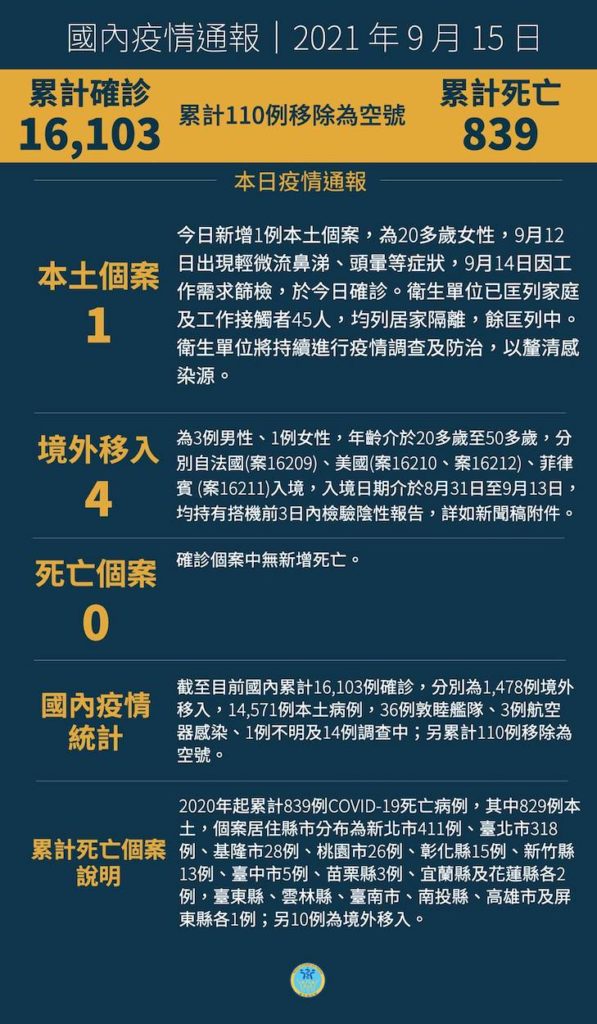 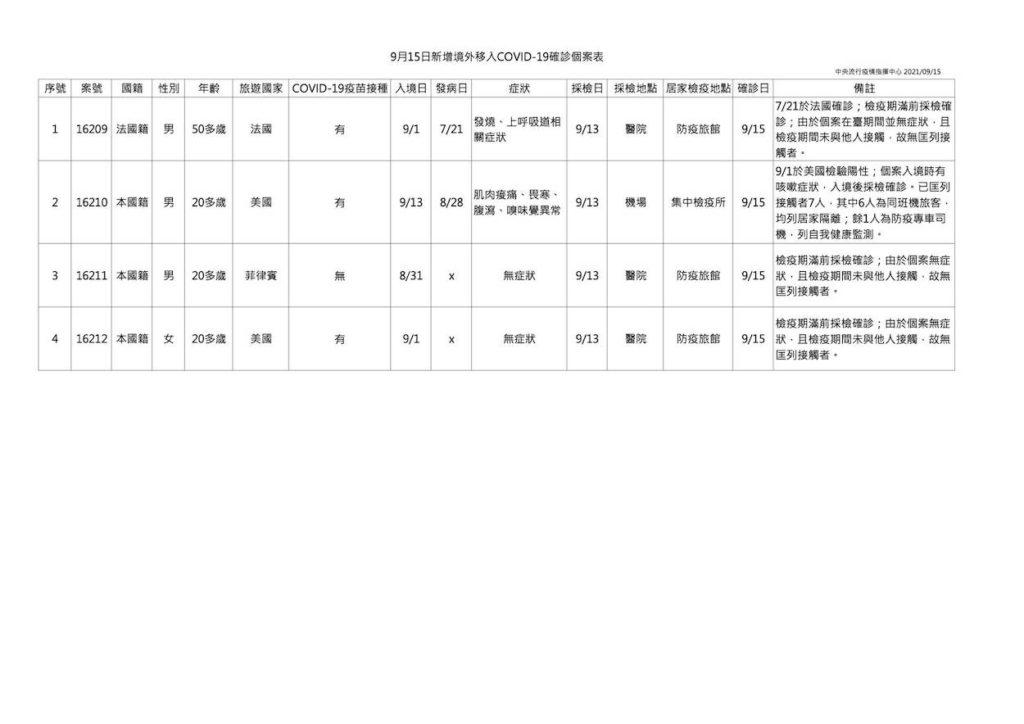 Preliminary results indicate that this is a Delta variant case, making this among 48 domestic Delta variant cases to date. The CECC will release more detailed genetic testing information on if this case is related to other Delta variant clusters tomorrow. However, with the Delta variant increasingly becoming the dominant variant of COVID-19 globally, it is to be expected that a worker at Taoyuan International Airport might come into contact with the variant from travelers. As such, the case will prove a test of measures to prevent the spread of the Delta variant among airport workers that are more likely to come into contact with it. This case had only one dose of vaccine, so is not classified as a breakthrough case.

No new cases were added to the Banqiao elementary school cluster, which the CECC views as stable. 2,081 tested in the first round as part of this cluster, with 22 positive results and 2059 negative results. 996 have been tested in second-round testing to date, with 3 positive results, and 993 negatives.

In Taipei, five kindergartens and four elementary schools were closed due to contacts with this case. 219 first-layer contacts were quarantined in Taipei, with 1,010 second-layer contacts quarantined, and 116 workplace contacts. The number of individuals in quarantine dropped from over 1,000 to around 500 yesterday, with more expected to be released in the coming days. This approach of quarantining layers of contacts will be used for cluster infections in the future.

Because there is currently a gap between vaccination periods, there were only 13,927 vaccinated yesterday. This brings vaccination coverage to 48.79%, which is 53.32 doses per 100 people.

Likewise, data is preserved in the online vaccination registration system between vaccinations. Symptoms for one or two days after vaccination is normal, but medical help should be sought if symptoms do not go away. Home quarantines are still not allowed for returning travelers.

Negative PCR tests and low Ct value ten days after decline in symptoms are required for release from quarantine under strengthened measures implemented as of September 3rd.

National Taiwan University is conducting trials mixing first dose Moderna with second dose Medigen. Discussion will also proceed on mixing mRNA vaccines, with Minister of Health and Welfare Chen Shih-chung stating that Taiwan would not only carry out practices that other countries have already implemented, otherwise Taiwan would never lead in anything. United Biomedical’s attempt to appeal the decision against its Emergency Use Authorization is proceeding normally. 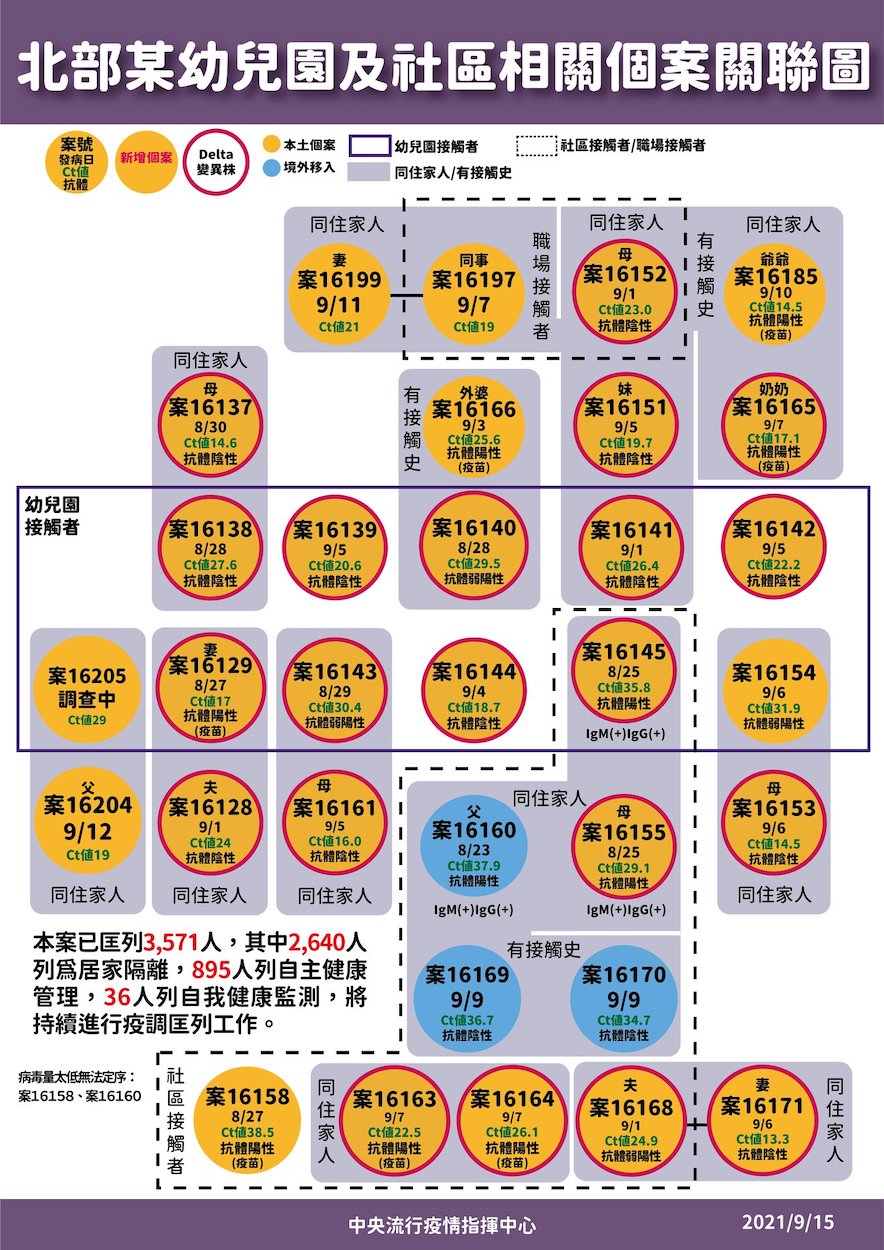 Testing and contact tracing information for the Banqiao cluster. Photo credit: Ministry of Health and Welfare/Facebook

There are currently no plans by the CECC to relax the current level two alert on September 20th, when the alert goes until, given the recent cluster infections. Some measures may be relaxed or left up to local authorities to decide on.