266 DOMESTIC CASES and 89 cases from the test backlog were announced today at the Central Epidemic Command Center’s (CECC) daily press briefing. There were no imported cases. 11 deaths were also announced.

The lower cases from the backlog compared to past days is because the processing of backlogged cases has sped up, with the CECC borrowing PCR processing equipment from academic institutions, and integrating data collection with the National Health Insurance system. There were around 30,000 swab samples awaiting PCR testing yesterday.

With 140 testing locations, the total daily capacity for testing is 50,100, but testing has not reached this peak yet. According to the CECC, around 20,100 tests were conducted yesterday. 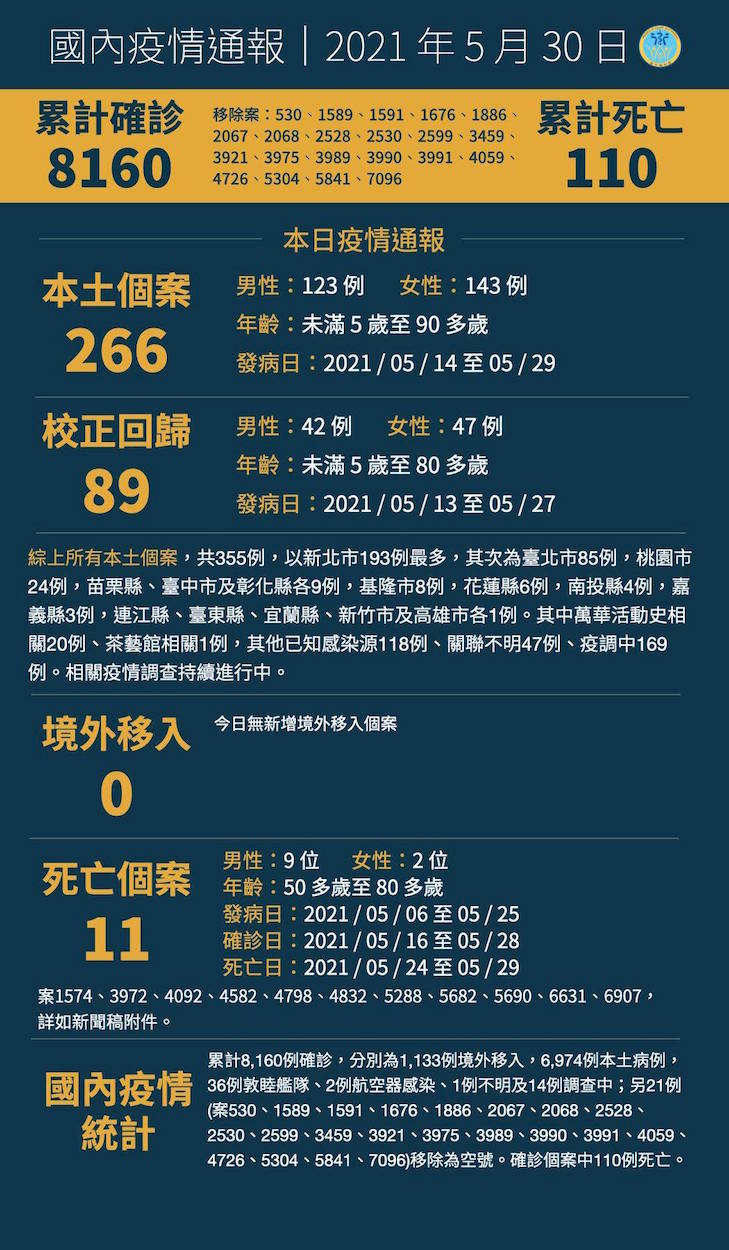 Today’s cases first displayed symptoms between May 14th and May 19th, while cases from the backlog first displayed symptoms between May 13th and May 27th. There were 193 cases in New Taipei, 85 cases in Taipei, 24 cases in Taoyuan, nine cases each in Taichung and Changhua County, and eight cases in Keelung. Likewise, there were six cases in Hualien, four cases in Nantou, three cases in Chiayi, and one case each in Lienchiang County, Taitung, Yilan County, Hsinchu City, and Kaohsiung. Twenty cases were linked to activity in Wanhua, with one case linked to tea parlors where sex work may take place. 118 cases had other causes, while 47 cases had unclear causes.

Taipei mayor Ko Wen-je has stated that the number of individuals coming in for testing has declined, as has the rate of infection, which has declined to 3.9%. However, there is still concern about undetected cases in Wanhua or as having spread to other parts of Taipei, resulting in announcement trucks being sent around Wanhua daily to call on individuals to test.

Quarantine facilities have also expanded, with 1,400 rooms added at ten locations, as well as eight to ten locations set up in Taipei and five in New Taipei, four of which are in use already. Two people will be put in the same room in specialized wards to treat COVID-19 patients, with the principle established that 10% of beds must be open for emergencies. Nevertheless, there are some reports of patients refusing to be discharged from hospitals.

Although the CECC states that medical resources across Taiwan are sufficient, there continue to be reports of stretched resources. One anecdotal case reported in the news involves an ambulance that was turned away from eight different hospitals. The CECC noted that it may suffer from delays in reporting information about the number of beds that are empty.

As a result, training for medical personnel to treat COVID-19 patients has been expanded. Procedures have been set up for prioritizing sending patients that need oxygen or need to be put in ICUs to hospitals and diverting them to hospitals outside of greater Taipei when they are full. According to Taipei mayor Ko Wen-je, who asked retired medical workers to step up and assist in efforts to fight COVID-19, more than 2,000 retired medical workers have joined in present efforts against COVID-19.

An online platform has been set up to provide information to individuals currently in quarantine, which they can also use to obtain medicine or call emergency services. Video conferencing with doctors will also be used to examine if patients need to be hospitalized. This system will begin to be implemented starting in New Taipei tomorrow, then expanded elsewhere. 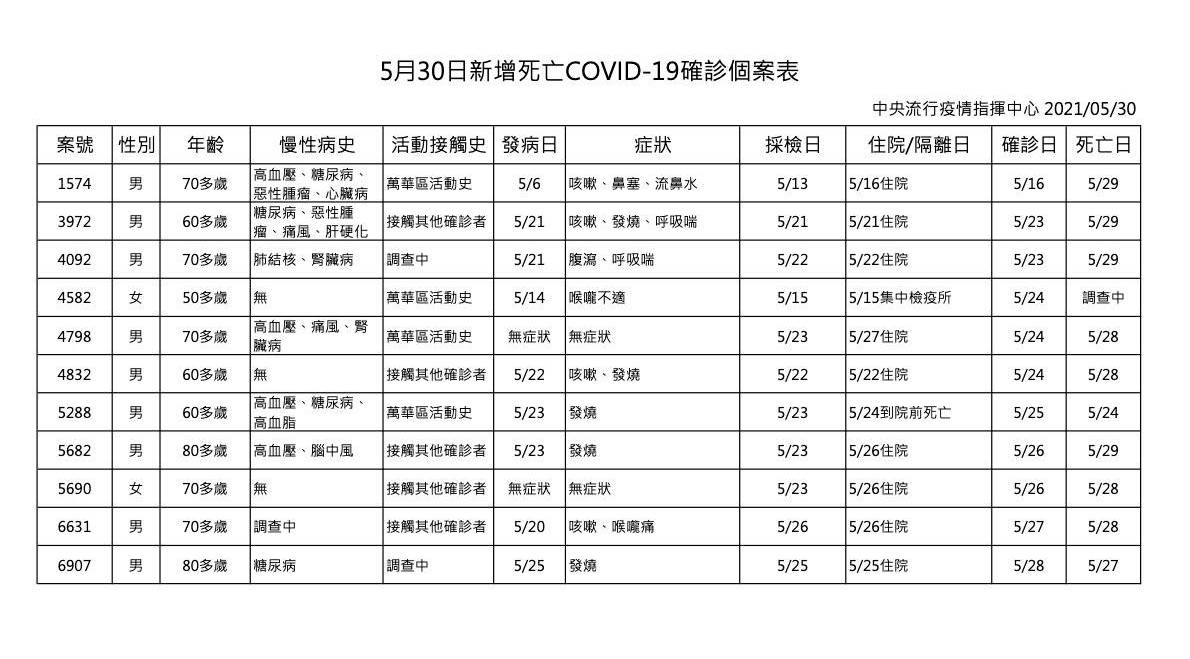 It is thought that individuals are less contagious ten days after the onset of symptoms, so local governments and the CECC have agreed that some individuals can be sent back home to quarantine for seven days if they have a separate bathroom and toilet at home, otherwise they would have to still stay in a centralized quarantine facility. At the same time, given the pattern of elderly patients dying at home due to COVID-19, the government is reconsidering allowing elderly patients or patients with chronic conditions to quarantine at home, even if their symptoms are currently mild.

Principles have been outlined by the CECC for businesses to conduct testing, though the Ministry of Health and Welfare can assist in providing personnel when this is necessary. A dialogue has been set up with the Ministry of Economic Affairs for when dialogue.

Many questions at the press conference today focused on vaccinations. Vaccinations will still prioritize medical personnel, with 260,000 doses of AstraZeneca distributed after the 150,000 doses distributed earlier this week.

With private enterprises such as contract manufacturing giant FoxConn, the religious group, Fo Guang Shan, or the KMT educational institution, the Sun Yat-sen School, stating that they intended to purchase vaccines, Chen thanked individuals that wished to contribute to Taiwan, and stated that the CECC could assist with administrative procedures. That being said, Chen stated that the CECC would need to examine the manufacturing process and ensure that vaccines had proper certification.

According to Chen, vaccine distribution will require specialized equipment and distribution networks, such as whether vaccines require personnel with specialized training for distribution. Some vaccines need to be refrigerated at extreme cold, for example.

Moreover, Chen stated that, although phase two tests are finished, it did not appear as though there were any issues with the vaccine currently. Chen asserted that because the vaccines had been tested on 3,000 to 4,000 individuals, there were no issues of safety, and that antibody counts indicate that the vaccine is effective. It is less clear if domestically-produced vaccines can receive expert approval internationally, with some expecting Taiwanese vaccines to be blocked from international recognition by China in the World Health Organization. 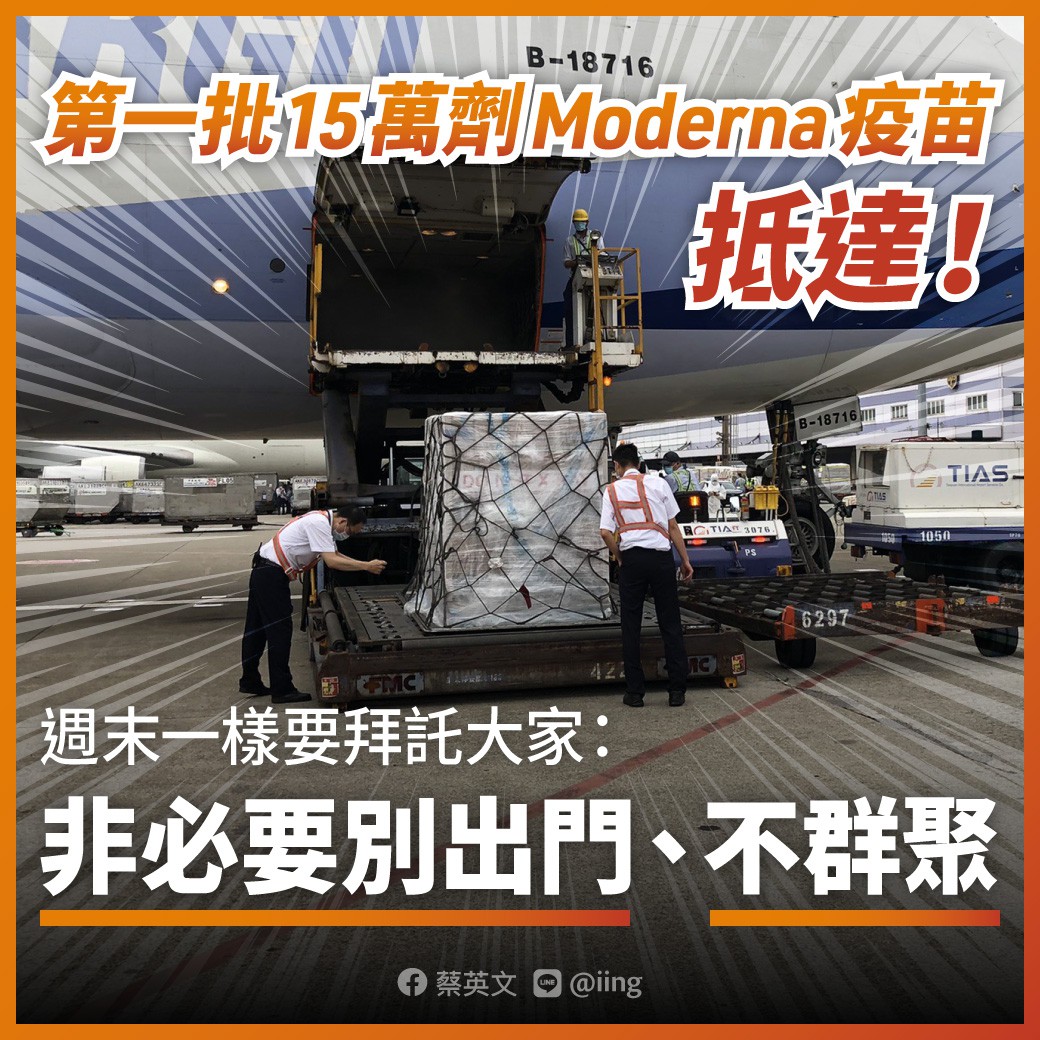 Infographic released about the arrival of the Moderna vaccines. Photo credit: Tsai Ing-wen/Facebook

Other controversies have taken place regarding vaccine distribution. With police and firefighters included in groups that can obtain vaccines, this led to 500 vaccines to be allocated to Kaohsiung police. However, there are more than 7,500 police officers in Kaohsiung, as well as 3,000 extra police sent to Kaohsiung from elsewhere. A police officer at the Datong Precinct in Taipei tested positive for COVID-19 by PCR testing today.

As there are concerns of COVID-19 spreading among Taiwan Railways Administration (TRA) workers, insurance policies have been rolled out to cover this. 18,000 TRA workers are now covered by COVID-19 insurance, allowing for 1,000 NT per day for up to 45 days for individuals that are hospitalized due to the coronavirus and 500 NT per day for relatives.

A YouTuber has been criticized for throwing water balloons filled with alcohol at homeless individuals not wearing masks in Ximending. The YouTuber’s actions could have potentially caused blindness. The CECC condemned the YouTuber’s actions when this was brought up at the CECC press conference today.

Postal workers in Nangang and Sanchong have tested positive for COVID-19, making eleven Chunghwa Post workers confirmed to have caught COVID-19 to date. Their sources of infection are unknown.

The first case of COVID-19 has been confirmed in Penghu, one of Taiwan’s outlying islands. The patient in question is a woman in her fifties, who is currently in a coma in a negative-pressure isolation ward, and who was working in Taipei at a childcare center before her hospitalization.

Farmers have self-organized in Pingtung to carry out disinfections, with farmers purchasing disinfectant on their own and spraying disinfectant from their farm vehicles. Similarly, with some traditional markets remaining open, store owners have divided up between themselves which days they will go to the market based on store address or floor number, in order to reduce crowds. New Taipei mayor Hou You-yi has called on traditional markets unable to maintain social distancing measures to close. Local mayors across Taiwan have cited that traditional markets are a potential hot spot for the spread of COVID-19.

With it anticipated that pan-Blue local governments may align to fight with the central government over issues such as whether to declare a nationwide level four lockdown and regarding vaccine acquisition plans, KMT and party chair Johnny Chiang met by video conference earlier today. Taichung mayor Lu Shiow-yen and New Taipei mayor Hou You-yi were not in attendance, though they sent representatives to the meeting. Pan-Blue local leaders seem to have decided that they intend to continue to push for rapid mass testing, although it is possible that this would produce large numbers of false positives.

Crackdowns on illegal gatherings continue to be carried out by police nationwide. Due to the economic effects of COVID-19, consumer confidence slid this month, dropping 2.4 points to 74.88 this month. 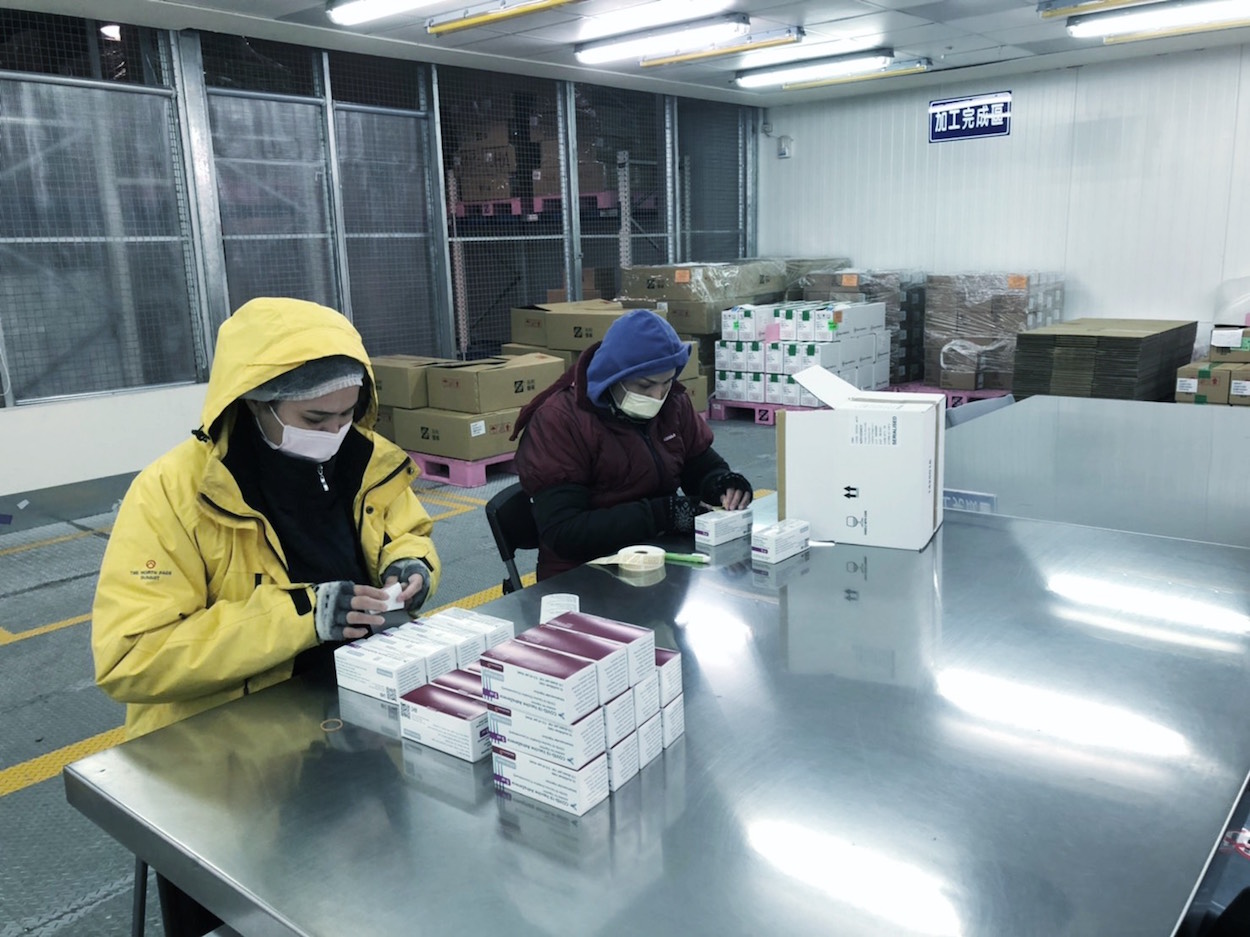 The CECC stated that it appeared as though there are early signs that Taiwan’s measures against COVID-19 have been effective, allowing for a preliminary assessment next week. New Taipei mayor Hou You-yi has stated that his city government is still ready to shift to level four when needed. Despite the Taipei city government carrying out exercises in preparation for a possible shift to level four today, Taipei mayor Ko Wen-je stated that based on declining rates of infection at testing sites having dropped to 3.4% and lower numbers at testing stations, he does not believe that Taipei will need to shift to level four. Nevertheless, he stressed that Taiwan could see an explosion of cases again if it is too lax.