LAST NIGHT’S attacks on anti-extradition bill demonstrators in Hong Kong proved shocking for many, with individuals thought to be pro-Beijing gangsters attacking unarmed demonstrators and police, for the most part, turning a blind eye to their actions. Nevertheless, comparisons to Taiwan may be useful here. 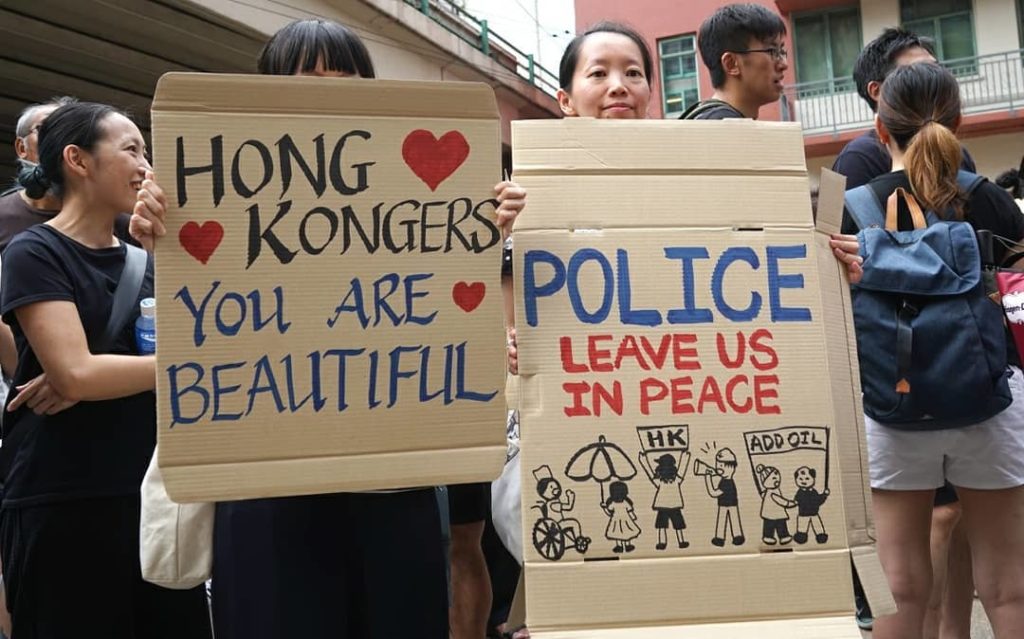 Attacks on Hong Kong demonstrators also occurred in 2014 during the Umbrella Movement, with the identical masks worn by assailants signaling that these attacks were coordinated and planned. Based on their accents, some assailants were thought to be Chinese nationals from across the border. It is also thought that these assailants were hired by the Hong Kong government, as a way of outsourcing state violence to individuals that could plausibly pose as non-state actors.

The intensity of police violence toward protesters and journalists during demonstrations against the extradition bill to date should be indicative of how Hong Kong police seem to increasingly view the public at large as their enemies, rather than to view their role as serving and protecting the public. Before the gangster attacks began, police themselves carried out a number of violent acts against demonstrators earlier in the night by firing tear gas and rubber bullets at demonstrators.

At the same time, that police did not respond to calls for them to take action against gangster assaults, instead retreating into police stations, responding slowly to reports of attacks, and letting gangsters off easy, has still proved unsettling for some. Police later did not arrest anyone and dismissed the attacks as violence between triads.

One notes that similar incidents have occurred in Taiwan several times in recent years. During the Sunflower Movement in 2014, “White Wolf” Chang An-lo—a former gangster who carried out political assassinations for the KMT during the authoritarian period turned pro-China fringe politician— arrived at the Legislative Yuan occupation on April 1st with several hundred of his followers, threatening to violently evict student occupiers.

However, apart from a few stray beatings of demonstrators that ventured too close, Taipei police kept Chang and the students separate, this despite that the pro-China Ma administration was in power and the mayor of Taipei was Hau Lung-bin of the KMT. The incident would repeat itself the following year during the weeklong occupation of the Ministry of Education by student activists protesting the KMT’s attempt to institute an educational curriculum that would whitewash the party’s authoritarian past, when Chang again threatened to violently evict student occupiers. But Taipei riot police eventually took action to drive Chang and his followers away. This would be reflective of the differences between Taiwan and contemporary Hong Kong, where democratic freedoms are concerned. 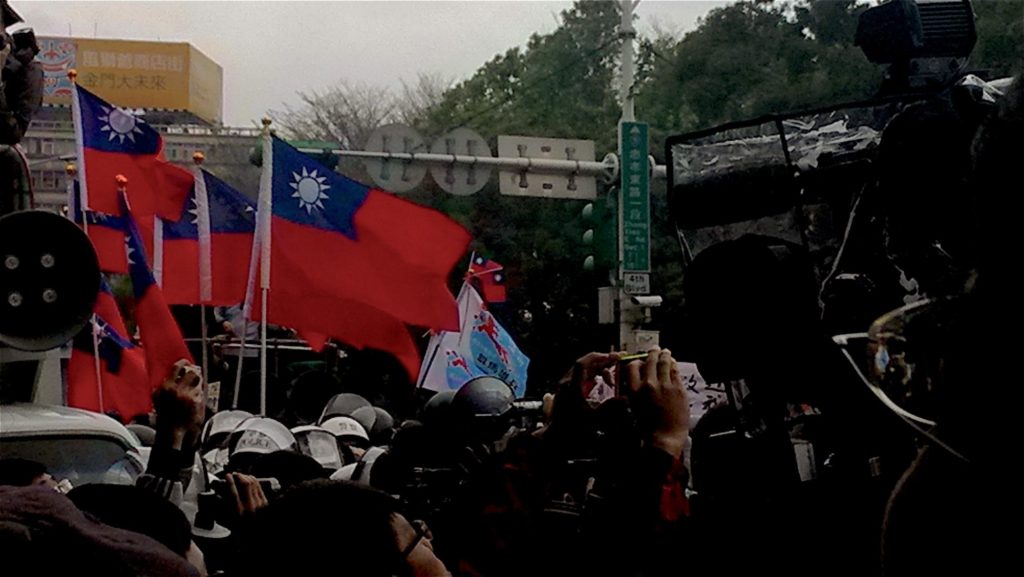 Chang An-lo and his associates on April 1st, 2014, during the Sunflower Movement. Photo credit: Brian Hioe

That being said, questions remain about the beating of student protesters on the National Taiwan University campus by followers of the White Wolf during the Sing! China incident in September 2017 and why police took little action during the incident, with some evidence of ties between police and followers of Chang. It has since emerged that pro-China groups in Taiwan such as Chang’s China Unification Promotion Party and the China Concentric Patriotism Alliance have internal ties within the Taiwanese police force. This likely goes back to the fact that the remnants of the former KMT party-state still exist within government institutions such as the police and military and that, during authoritarian times, Chang and his followers carried out the dirty work of the KMT government. One notes that Chang continues to enjoy a close relationship with figures in the KMT such as Ma Yi-nan, the elder sister of former president Ma Ying-jeou.

Cozy ties between police and gangsters, then, should not surprise given the use of gangsters such as Chang by the KMT government, which has had ties with organized crime going back to when it was in China, or the contemporary use of armed thugs by the Chinese government. That is, the use of gangsters as violent enforcers allows authoritarian states to delegate the use of violence transcending any the pretensions of the rule of law to individuals that can pose as non-state actors. The close ties between police and gangsters is simply another sign that the Hong Kong government can increasingly be seen as an authoritarian state.

Indeed, some have noted that the lines between police and gangsters seem increasingly blurred in Hong Kong. Apart from increasingly violent behavior by police, in the course of protest to date, there are many incidents in which Hong Kong police have been observed cursing and violently threatening protesters, with no pretensions to professional civility. Retired police have also been found among individuals who have attacked protesters as part of pro-Beijing mobs.

But to this extent, as also self-evident in the Taiwanese context, one should remember that it is the state which holds the right to legitimate violence in society. As Max Weber wrote in “Politics as Vocation,” the state is that “human community that (successfully) claims the monopoly of the legitimate use of violence within a given territory.”

Police, then, as the enforcers of the state, have the right to legitimate violence within a society. But pro-Beijing gangsters are, in this case, also acting on behalf of the state as its enforcers. This is why increasingly blurred lines between violent gangsters and police, as well as the cozy relationship between the two, should be of little surprise. 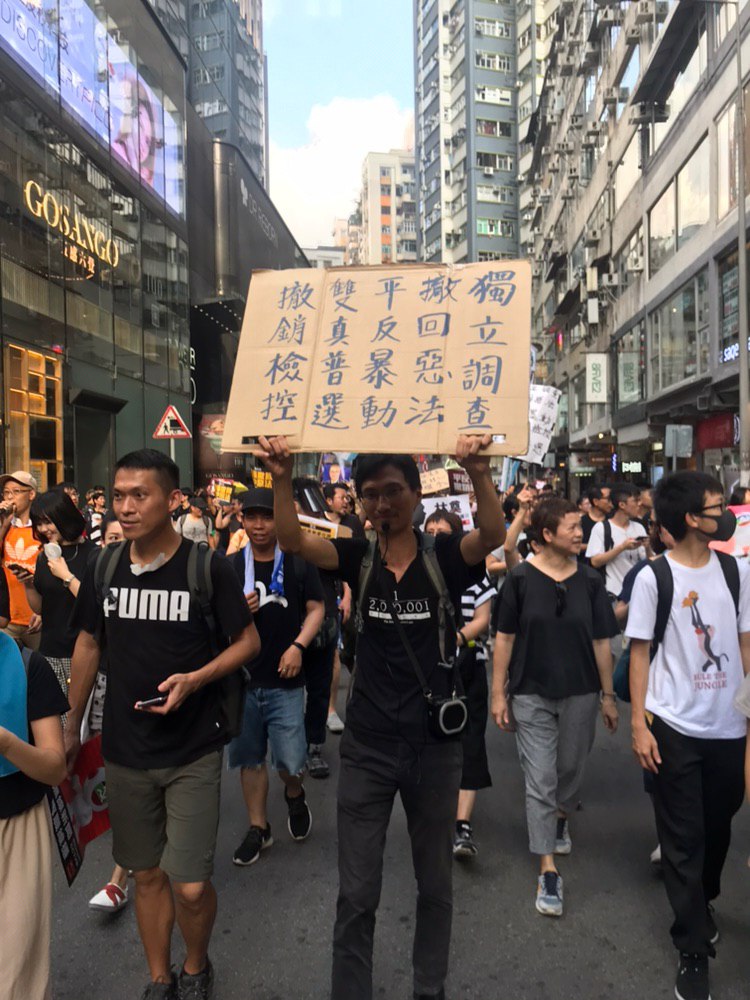 Again, this would simply be another sign of the increasing authoritarianism of the Hong Kong government. As the Hong Kong government is acting on behalf of its masters in Beijing, it should be clear that the deterioration of Hong Kong’s political freedoms—including the attempt to pass an extradition law which could result in Hong Kongers freely deported to China to face criminal punishment there—can be understood as the Chinese government claiming the right to the legitimate use of violence within Hong Kong.

In past years, some have proposed comparisons between Taiwanese history and present-day Hong Kong, with the suggestion that Hong Kong is currently in a period similar to Taiwan’s White Terror. Unfortunately, given that some political killings and assassinations were outsourced by KMT government to gangsters such as Chang An-lo, it is very possible that the dirty work which Hong Kong police outsource to gangsters will not simply be assaulting police protesters in future—something Hong Kong police already are capable of doing themselves, with better equipment to boost. For example, Hong Kong police increasingly demonstrate a willingness to conduct what may be political frame-ups, as can be observed in dubious accusations that the Hong Kong National Party is involved in the “largest-ever” bombing plot in Hong Kong history. Yet such work may be better delegated to organized crime groups and the like.

As such, rather than simply being surprised that police took no action against gangster beatings, escalation of what forms of violence are outsourced by Hong Kong law enforcement to gangsters is a possibility that Hong Kongers need to prepare for.