Rochester, Beijing, and the Suppression of Taiwan and Hong Kong

IF ONE BELIEVES the rhetoric emanating from Beijing, the Chinese Communist Party (CCP) seeks to be an “international partner” and a “global power” committed to peace and cooperation. The experience of many students from Hong Kong and Taiwan, however, tells a very different story. After nearly six months of continuous protests in Hong Kong recent confrontations between student protesters and police at both Chinese University of Hong Kong and Hong Kong Polytechnic University have not only amplified the increasing militarization of Hong Kong police brutality (and steadily more radical measures by students) but indelibly highlight the centrality of university campuses as hotly contested grounds for Beijing’s control of the narrative about what it labels “sensitive issues.” 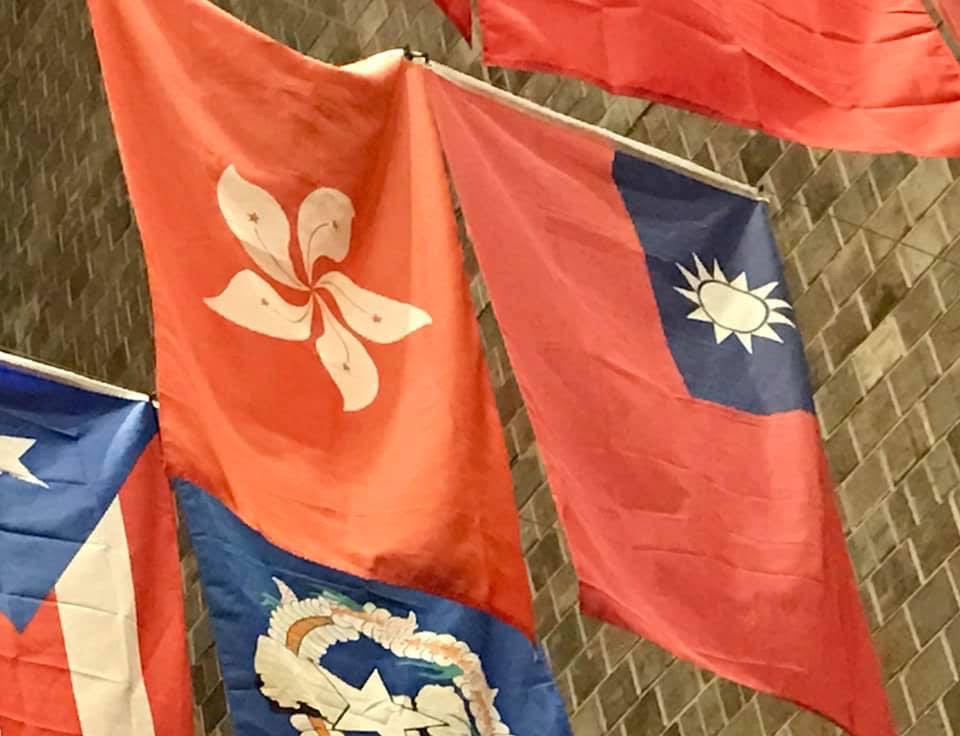 Influencing educational institutions has long been part of the strategic foreign policy goals of the CCP, most clearly visible in the global proliferation of Confucius Institutes (CI) since 2004.  It’s an open secret that the “Three Ts” (Taiwan, Tibet, and Tiananmen) are taboo topics at CIs; given recent events and news coverage, one might now add Hong Kong and Xinjiang to this list. Yet since the University of Chicago first closed its CI in 2014, the National Association of Scholars released its “Outsourced to China” report in 2017 calling on universities to close their CIs, and this year’s US Senate report “China’s Impact on the US Education System,” we have witnessed growing awareness and pushback against the enforcement of such “ideological purity” on college campuses in exchange for Chinese language funding from the People’s Republic of China (PRC). As more CIs close but the number of PRC students going overseas continues to rise, how does the neoliberal university manage the CCP’s narrative of “sensitive issues”? And why should educators care? Events at two US campuses last week offer some insight.

Last week, the University of Rochester (UR) in the United States was found to have moved the Republic of China (ROC, Taiwan) flag, formerly exhibited side by side with other international flags in alphabetical order, next to the flag of Hong Kong in the university’s Hirst Lounge where flags representing countries from its student body are displayed. In addition, on UR’s website, Taiwan and Hong Kong were relegated, firstly, to the creatively confusing category of “sub-nations,” later to “Special Autonomous & Other Regions” (the term “sub-nations” was still visible in the URL link on 20 Nov), and then on 21 November the compromise solution UR seems to have taken is to separate the flags into “UN Recognized States” and “Other Countries and Regions” under which they have put Taiwan and Hong Kong. Curiously, UR’s website still lists Kosovo under “UN Recognized States” even though it, like Taiwan, is not recognized by the United Nations. What are we to reasonably conclude?

Despite the “spirit of inclusivity” professed on UR’s website, such semantic gymnastics not only hints at pandering to a PRC-approved nomenclature, it’s also a slap in the face to the Taiwanese students at UR and one more example of their too often marginalized status as international students. Most notably this appears to have been a change that was made in the wake of objections from PRC students after a campus event on the abysmal human rights situation of Tibetan and Uyghurs in China.

The CCP’s narrative notwithstanding, the ROC (Taiwan) has never been part of the PRC; it is a de facto independent and democratic country that exceeds the four basic requirements of Article 1 of the “Convention of Rights and Duties of States” for a sovereign state (a permanent population, a defined territory, a government, and the capacity to enter into relations with other states; it also has a standing military, its own currency, and passports). Official policy in both Australia and the US simply acknowledges the PRC’s position that there is “One China” (which they claim includes Taiwan) and that Taiwan’s international status is “undetermined” (but cannot be unilaterally determined by the PRC), it does not endorse nor agree with the PRC’s interpretation of this policy. Beijing’s contestation of the ROC (Taiwan)’s sovereignty and their stranglehold that bars Taiwan from joining the United Nations (similar to Russia’s position on Kosovo) doesn’t make it any less a bona fide country in the real sense of the term. Other schools such as the Rochester Institute of Technology clearly feel no compunction about listing the flags of all their international students without baffling caveats like those at UR. 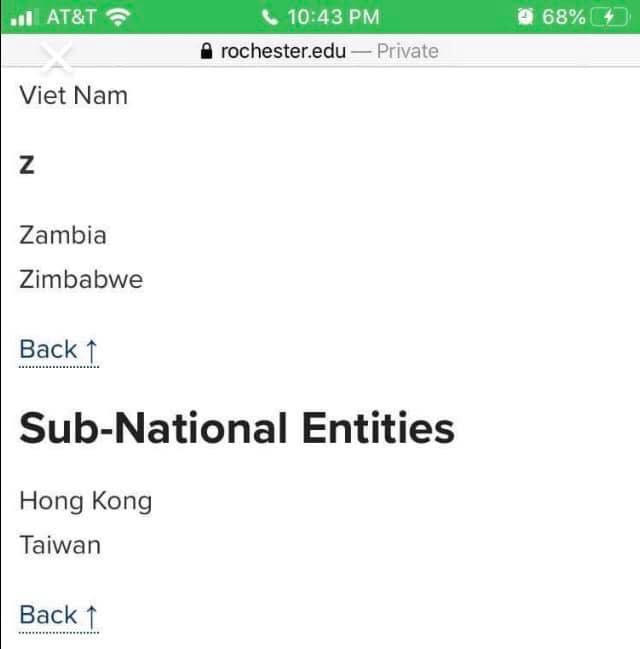 Universities in open societies should be bastions of free-thinking and spirited debate, not willing conduits for an authoritarian government’s view of the world. Nor should universities allow their degrees to become tools of CCP propaganda, as New York University’s Shanghai campus was recently exposed to have quietly allowed. We are encouraged by the news last week of Northwestern University’s refusal to take down a photo it posted that included the ROC (Taiwan) flag and one supporting Taiwanese independence alongside the PRC and other nations’ flags. It defended the post stating “We support and encourage free expression and free speech on campus and the sometimes uncomfortable debates that such speech inspires.”

Let’s also make one thing clear: Chinese international students are not a monolith; many of them, in fact, do support democracy and freedom in Taiwan and Hong Kong and wish for similar liberties back home. Their voices, unfortunately, tend to go unheard in public debate, usually drowned out understandably by fear and intimidation tactics the CCP and its operatives employ to monitor PRC students overseas. We can and should support and distinguish these students from their government.

As Dr. Wen Liu, a professor at SUNY-Albany, aptly warned in a recent post: “The PRC is exerting more control over academic institutions globally, and many institutions are happily complying with its agenda—THAT is the problem.”

Adam K. Dedman (戴擁浩) is a Ph, D candidate in Cultural & Taiwan Studies at the University of Melbourne and will be a 2020 Taiwan Fellow (MOFA) at National Chengchi University.

Sean Jung-Hau Chen (陳仲豪) is a Ph. D student in Higher Education at the University of Rochester.