AN ALLIANCE of NGOs, civil society organizations, and student activist groups held a demonstration against Chinese efforts directed at annexing Taiwan outside the Qunxian Building of the Legislative Yuan earlier this evening.

Approximately sixty or seventy were in attendance, primarily youth activists. The demonstration began at 7 PM and went until approximately 8:40 PM, consisting mostly of speeches. The demonstration called attention to Chinese political influence in Taiwan in a variety of forms, including funneling financial resources to pan-Blue media outlets in order to spread news favorable to Chinese interests in Taiwan, and spreading political disinformation. Speakers thus called on political parties to take legal action to push for transparency with regards to sources of funding for media outlets as a means of combating political disinformation, with such legislation currently under discussion in the legislature. 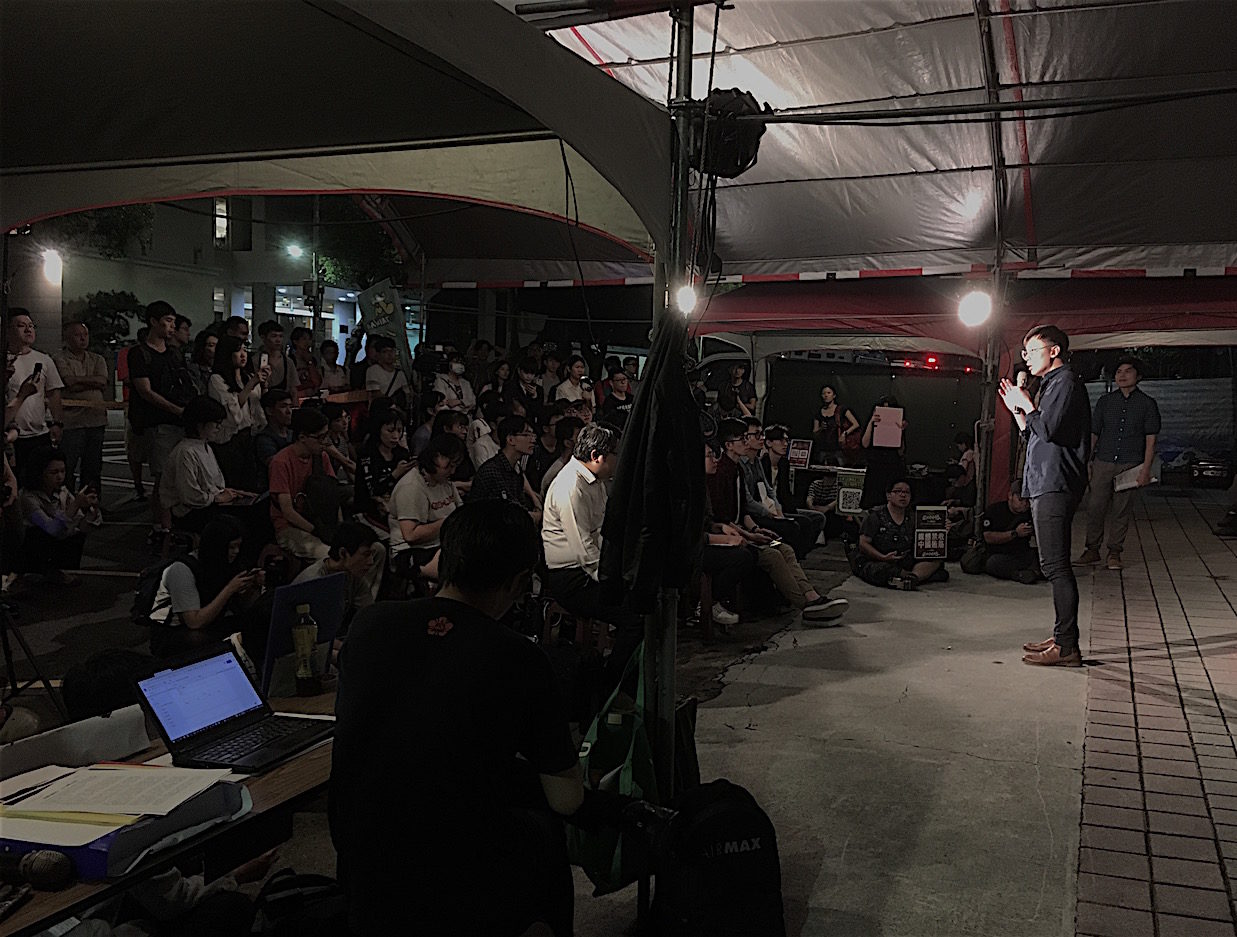 Speakers at the demonstration likewise called attention to the KMT’s continued efforts to sign away Taiwan’s political freedoms through cross-straits agreements, as observed in the recent notion of signing a peace agreement with China. Furthermore, speakers called attention to the deterioration of political freedoms in Hong Kong in recent years, particularly with regards to a new extradition law which would allow China to extradite individuals in Hong Kong to China, even if they are just transiting through Hong Kong. China’s kidnapping of Taiwanese human rights activist Lee Ming-che was also brought up as an example of what would become a commonplace occurrence if China annexed Taiwan, Lee currently being imprisoned in China on charges of subverting state power for attempting to discuss Taiwan’s democratic experiences with Chinese friends on WeChat.

Notably, many of the organizations present at the demonstration had played central roles during the Sunflower Movement. The Taiwan Citizen Front was the main organizer of the event, the Taiwan Citizen Front being an alliance of civil society groups recently formed by lawyer Lai Chung-Chiang. Lai is the convener of the Economic Democracy Union, one of the key groups which organized demonstration against the CSSTA cross-straits trade bill that the KMT attempted to force into law in March 2014, leading to the outbreak of the Sunflower Movement. The Taiwan Citizen Front was formed with the aim of unifying NGOs, civil society groups, youth activist groups, and progressive political parties in order to counter China’s attempts to undermine Taiwan’s sovereignty.

As such, it may not be surprising that a large number of participants in the demonstration today were youth activists. Apart from Lai, other prominent activists present included student leader Lin Fei-fan, as well as Chiu Eeling, the secretary-general of the Taiwan Association for Human Rights, and others. 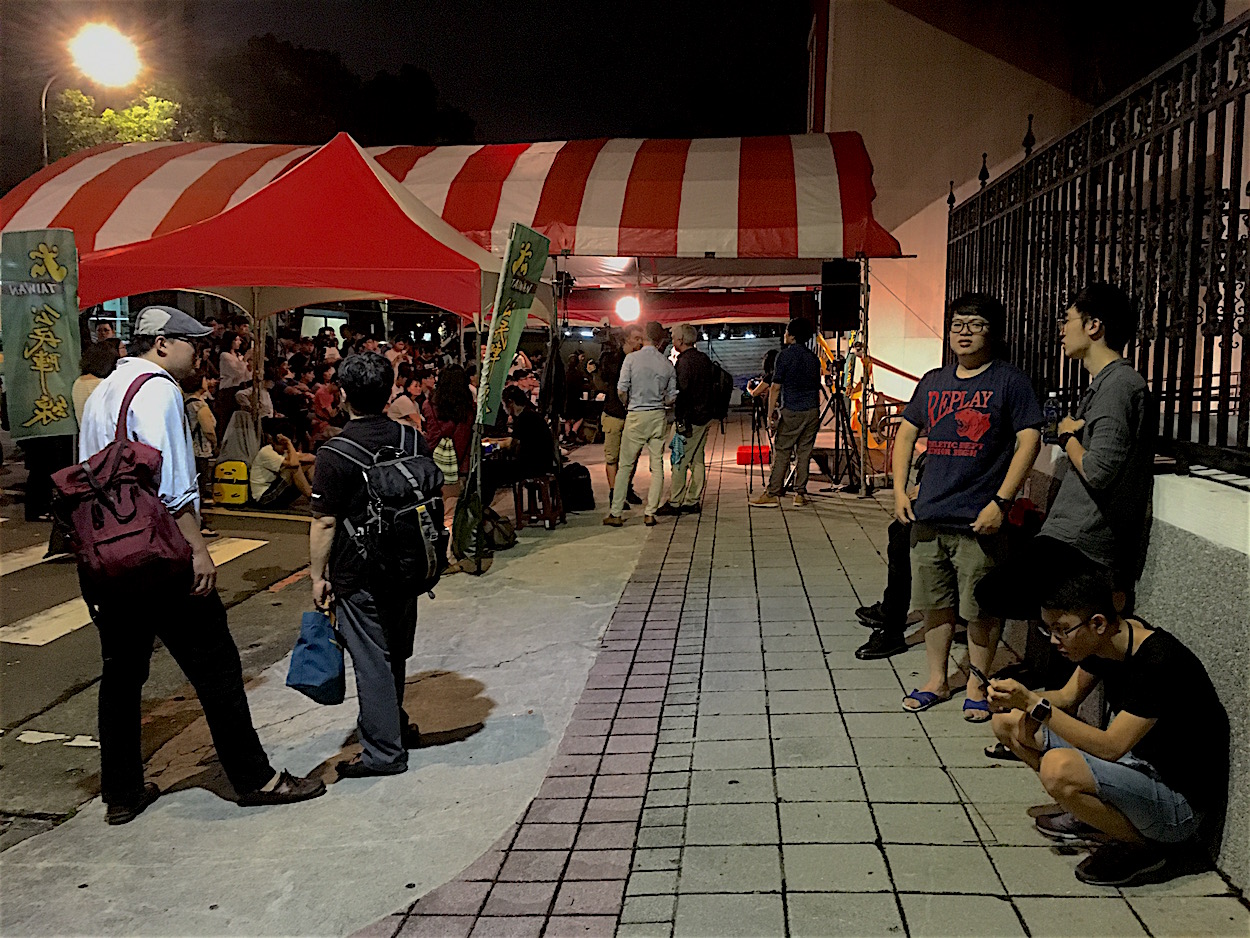 In comments which seemed to be directed to the community of youth activists in Taiwan writ large, Lin called on youth activists who had gone their separate ways in the past few years to unite, emphasizing the need resist Chinese attempts to influence 2020 elections in the coming half year, and that this required youth activists, civil society groups, and progressive political parties to unify. Chiu echoed such comments, also calling for unity rather than in-fighting over relatively small political differences. To this extent, Lin cited that the demonstration today took place outside the Qunxian Building of the Legislative Yuan, a key site in the Sunflower Movement, and how it involved many long-time activists from the Sunflower Movement and earlier—stating that he hoped that, as in the past, actions will be organized in the coming months.

Representatives of the Youth Front to Resist Fake News, a coalition consisting of student groups at over one hundred campuses which have organized to counter misinformation from pan-Blue and pro-China news outlets, were also present. Activities of the group include investigating whether eateries and local establishments are being paid to broadcast specific news channels and whether news disproportionately focuses on certain issues or individuals, such as Kaohsiung mayor Han Kuo-yu.

As such, activist Tao Han spoke about efforts to unite student unions at campuses across Taiwan, as well as the need for student activist groups to once again organize when many student groups have become inactive in the years following Tsai Ing-wen’s presidential election victory in 2016. The MC of the event, Chiang Min-yen, formerly an editor of the Undergrad at the University of Hong Kong, spoke about his experiences as a Taiwanese student that went to college in Hong Kong, and the splits which occurred in Hong Kong after the Umbrella Movement, leading to some of the difficulties faced by Hong Kong youth activists in the present. 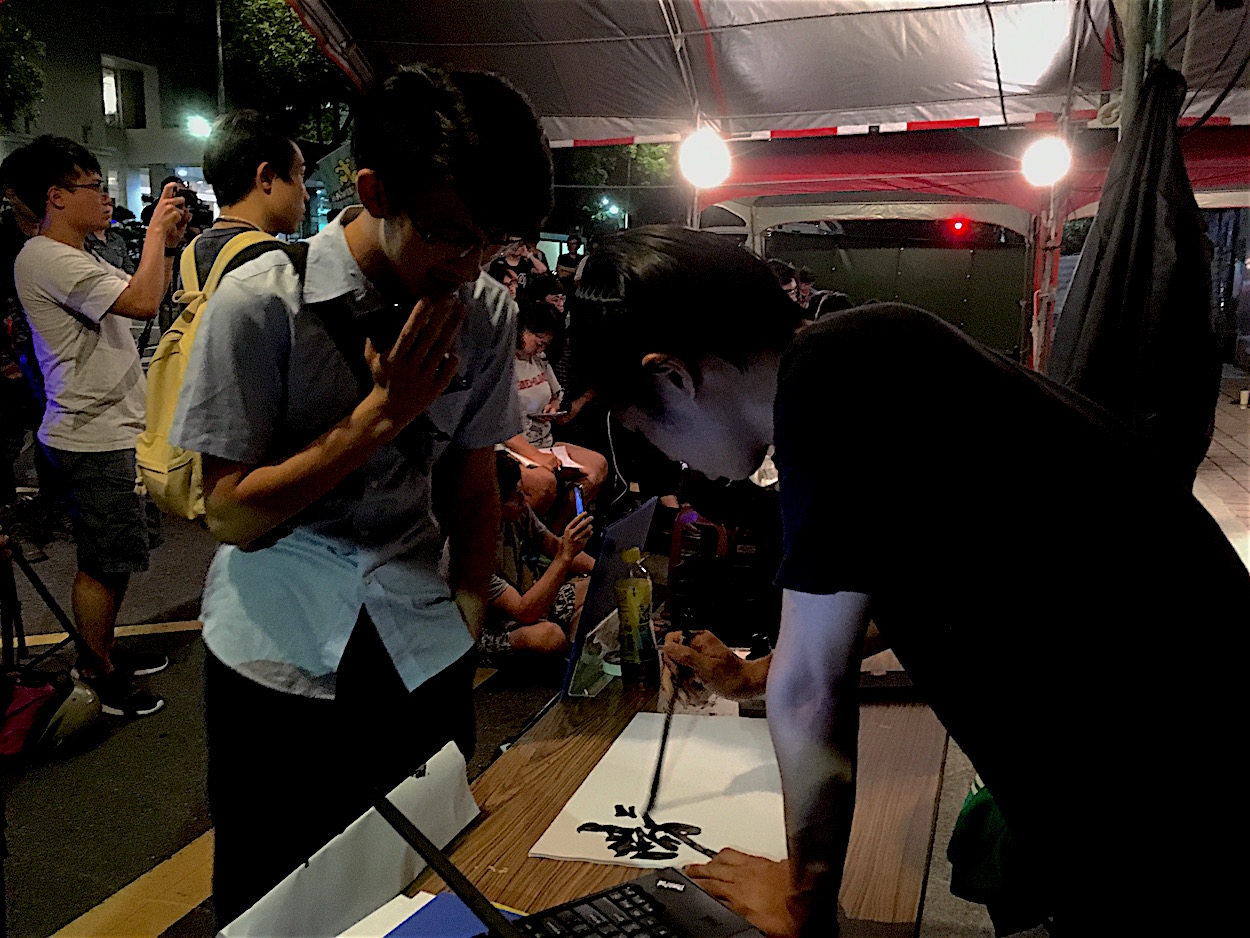 Indeed, one of the primary aims of the demonstration today seemed to be to recruit volunteers for future activities held by the Taiwan Citizen Front in the future, with an activity held for participants in the demonstration to be given calligraphy if they signed up as a volunteer for the Taiwan Citizen Front or “Liked” its Facebook page. Either way, demonstrators vowed that future activities would be planned, seeing as it is essential to organize before 2020 elections if Taiwan is to resist China’s efforts at annexing Taiwan.

Perhaps, then, one can see today’s demonstration as a call to action from post-Sunflower Movement activists who continue to confront many of the same issues regarding threats to Taiwan’s democracy and political sovereignty that they did five years ago. Nevertheless, it remains to be seen whether activists will be able to organize and coordinate as they did five years ago, as well as whether the public will be as responsive as in the past.