Ahead of International Workers’ Day, Migrant Workers Demonstrate Outside of Ministry of Labor

A DEMONSTRATION BY migrant workers took place outside of the Ministry of Labor this afternoon. Just over one hundred were in attendance, demonstrators mainly consisting of migrant workers, but also with some supportive Taiwanese demonstrators, these being primarily labor organizers or youth activists. 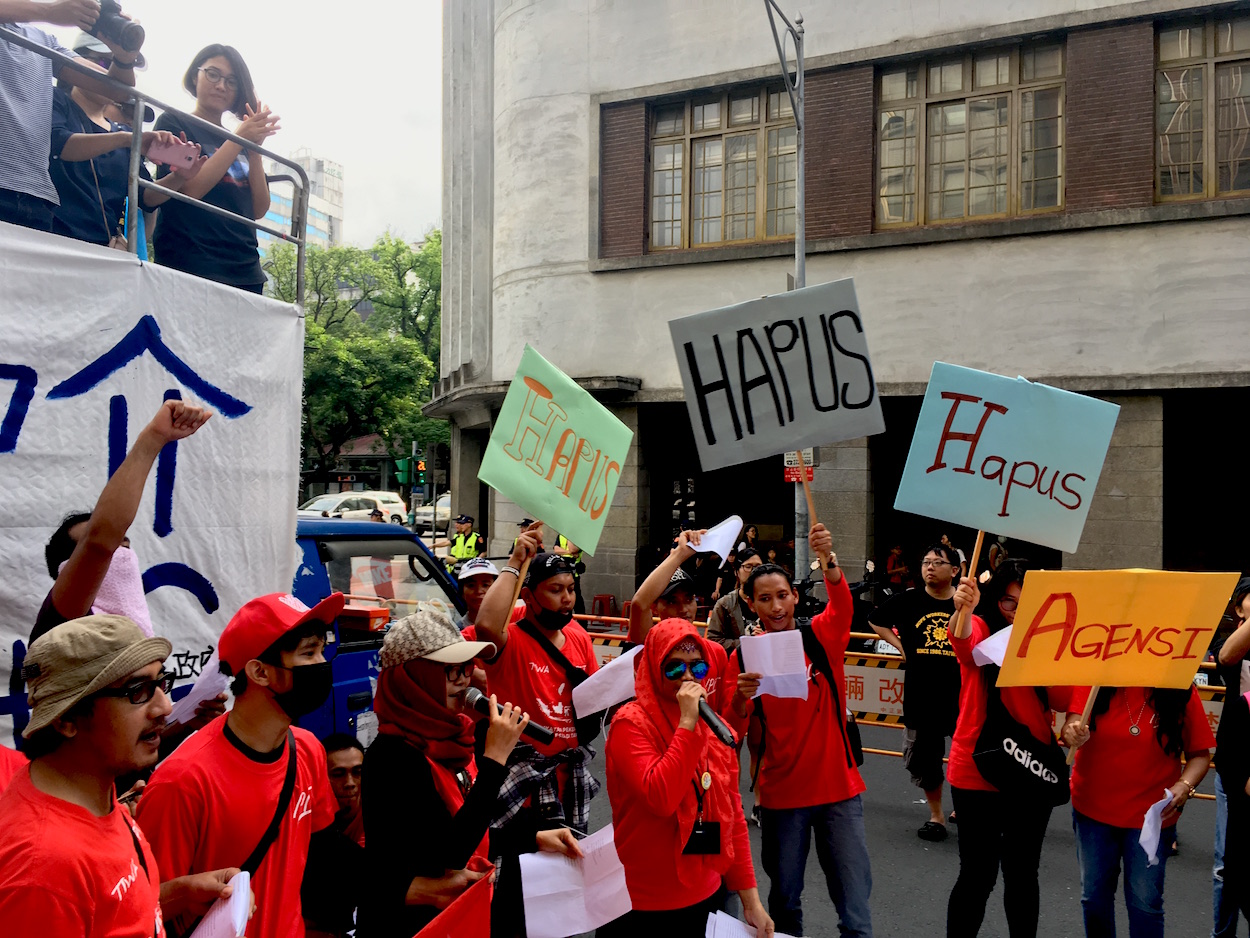 Many migrant workers wore masks or otherwise covered their faces at the demonstration today because of the fact that they could face reprisals from their employers or the broker agencies which arrange for their employment in Taiwan if it were known that they were engaged in protest. Taiwanese law enforcement has also targeted migrant workers engaged in protest in the past, demanding their identities, or otherwise taking actions against them. 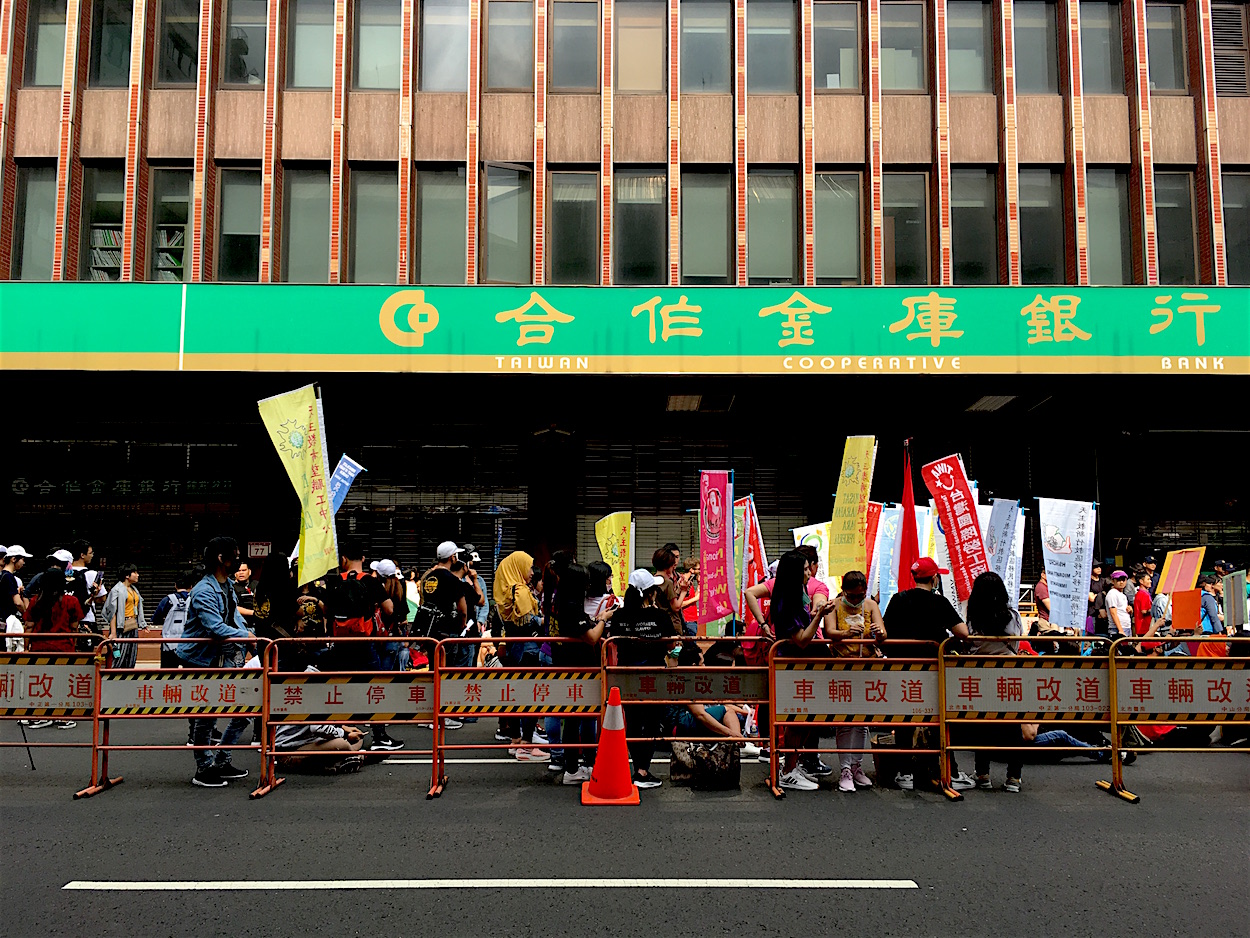 Apart from demonstrating in front of the Ministry of Labor, workers sewed together a large quilt out of patches of fabric. Each patch had a message written by a migrant worker written on it and when sewn together, the completed quilt was between 50 and 70 feet long. Workers held up the quilt while chanting slogans. Demonstrators stated that this was symbolic, given that female migrant workers in the past would make clothing out of old scraps. 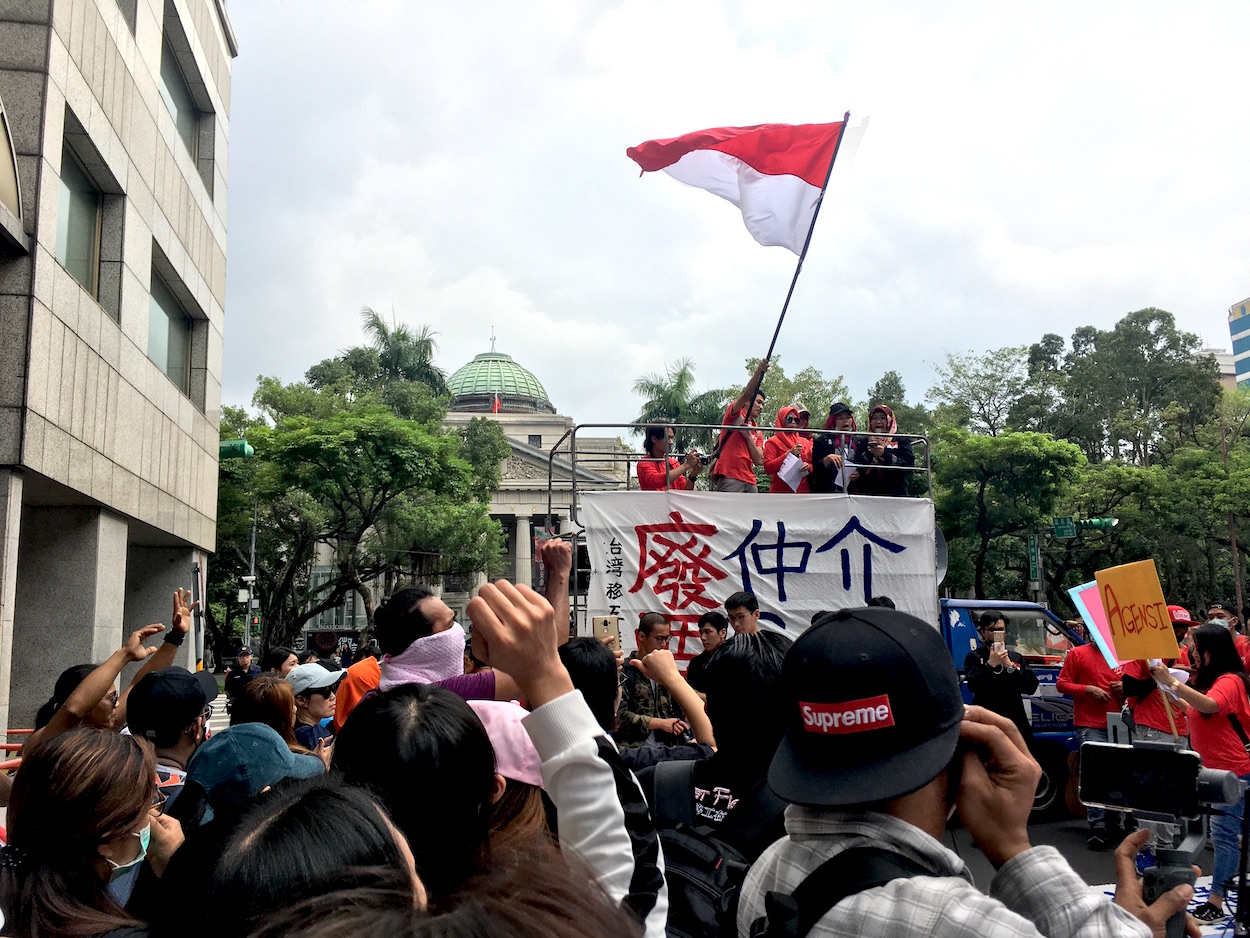 Musical performances also took place, including a performance of the traditional anthem of the Taiwanese labor movement, the “Workers’ Fight Song” (勞動者戰歌). Though the song was originally a Korean workers’ anthem that became adapted by workers in Taiwan, the enthusiastic reception of the song at the demonstration indicates that migrant workers have also become familiar with the song.

Migrant workers at the demonstration primarily demanded an end to the present broker system, in which broker agencies arrange for the employment of migrant workers in Taiwan as well as their transportation to and from Taiwan. However, brokers impose high surcharges on migrant workers and sometimes deduct costs from workers, such as charging them for board and lodging. Likewise, workers are arbitrarily charged different fees depending on when they come to Taiwan. It is also relatively common for migrant workers to take out large loans in order to pay off broker fees, meaning that they spend their employment in Taiwan trying to pay off their debt. 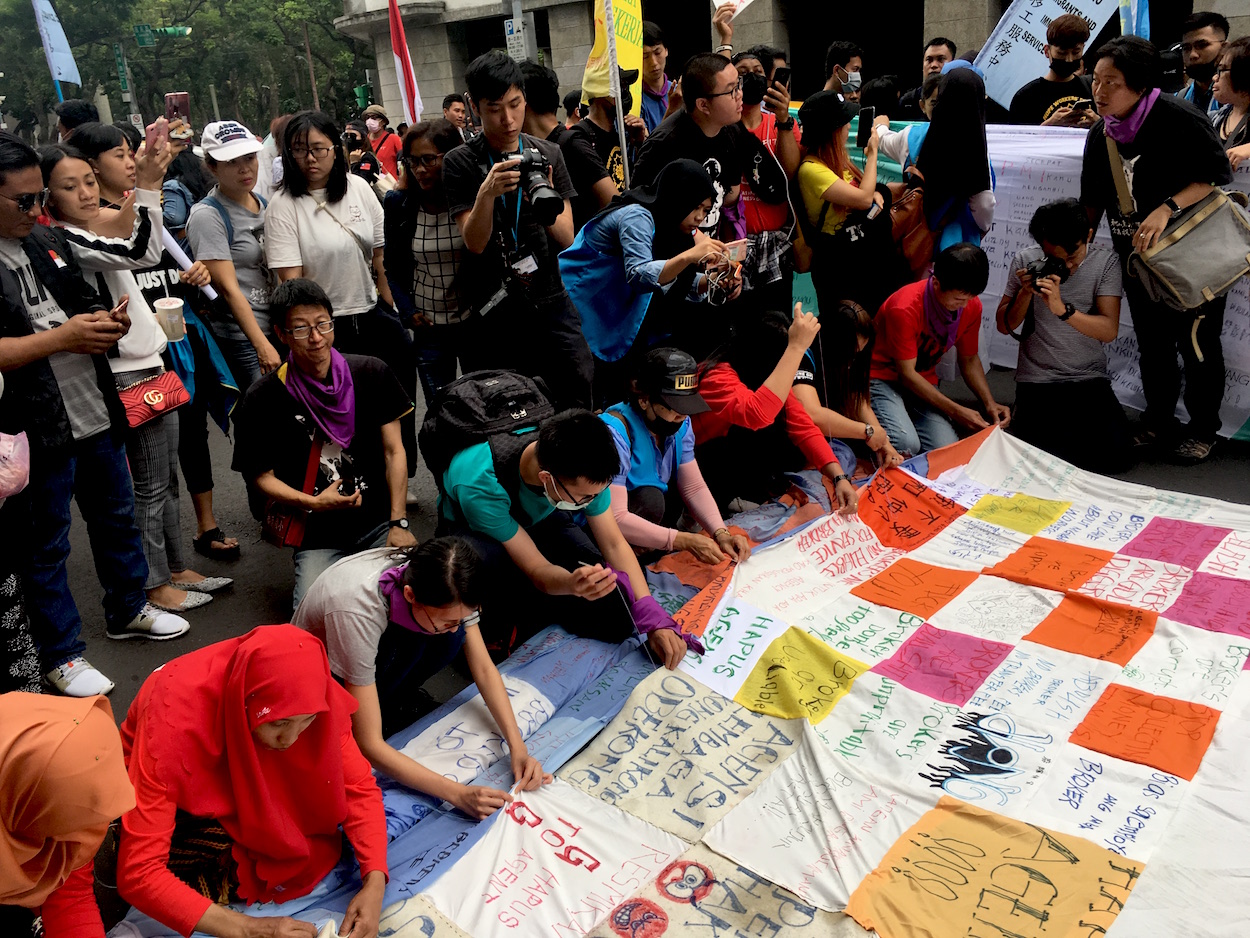 To this extent, demonstrators called for a direct hiring process for workers to occur on a government to government basis, between the Taiwanese government and other governments, a practice referred to as “G to G” in protest chants. Demonstrators also called on the government to make more resources readily available to workers in languages they understand, pointing out that migrant workers have difficulty accessing information about government resources and services—even those precisely intended to benefit migrant workers—because such information is predominantly in Chinese. 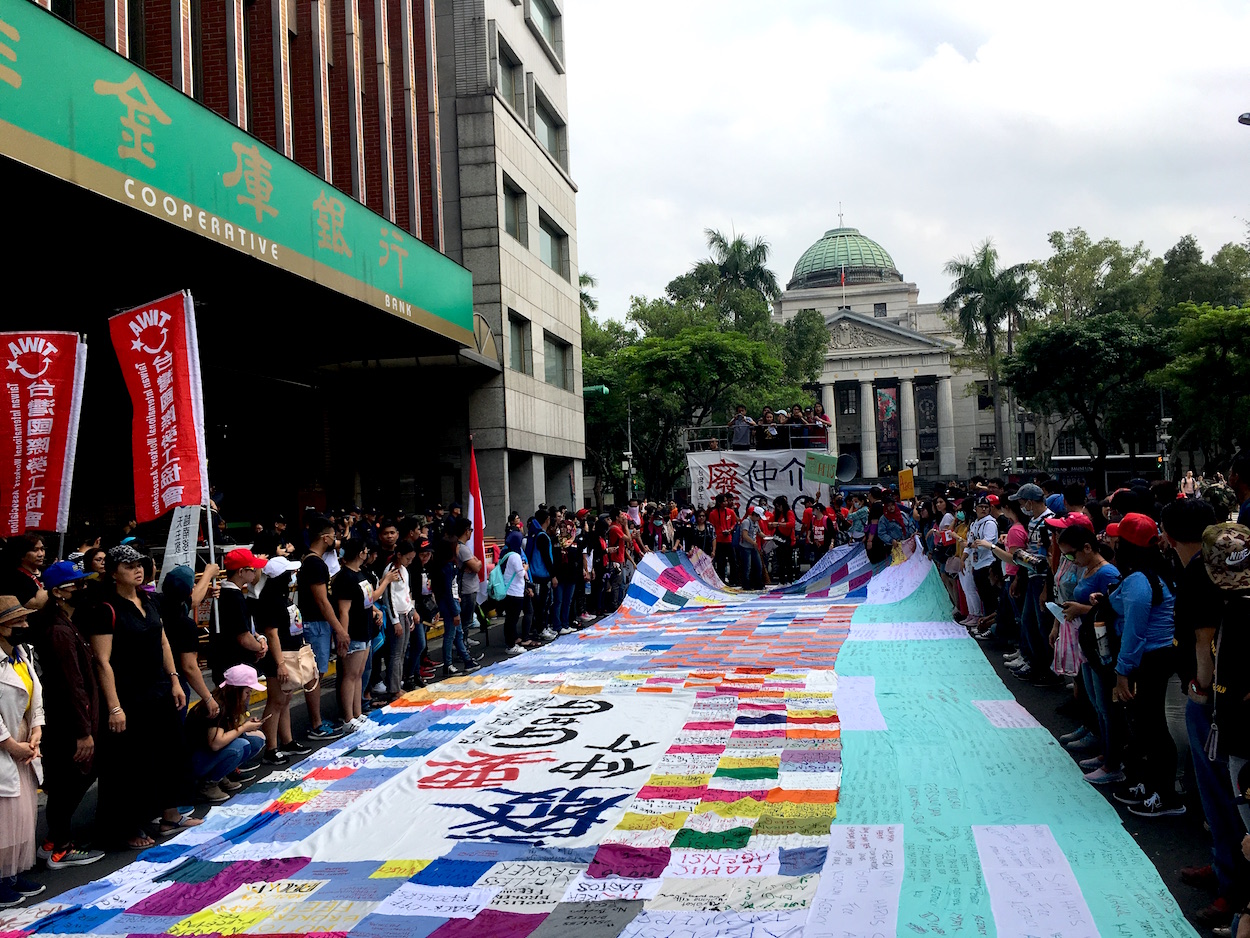