CONTROVERSY HAS erupted after a sculpture installed on the campus of the London School of Economics (LSE) originally depicting Taiwan as separate from China was later changed by the school administration to depict Taiwan as part of China. The sculpture, entitled “The World Turned Upside Down”, is by Turner Prize-winning British artist Mark Wallinger, depicting an upside-down political globe. The sculpture is located outside of LSE’s Saw Swee Hock Student Centre. 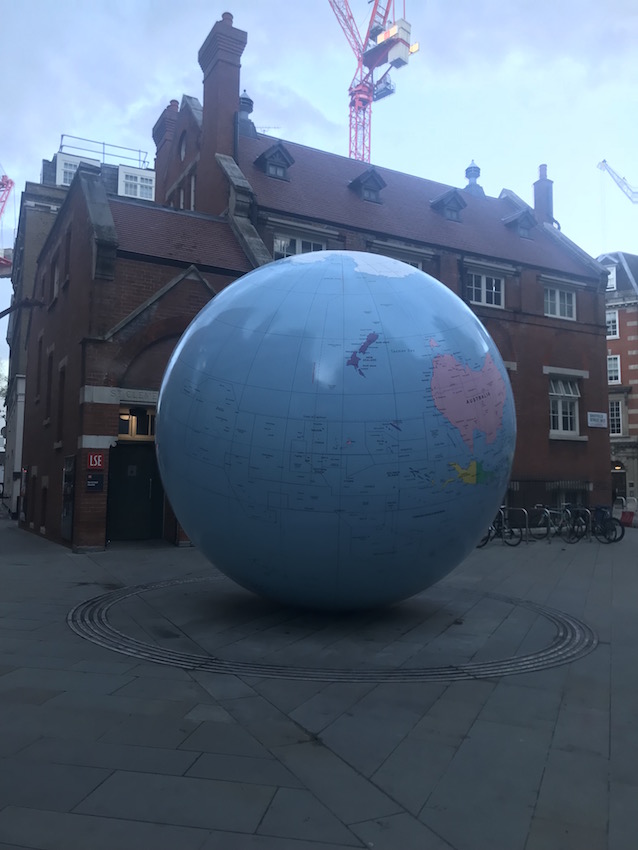 Some have suspected that Wallinger deliberately intended to depict Taiwan and Tibet as not being part of China, leading to some criticisms that LSE’s administration would go ahead on its own and change an artwork without the permission of the creator. That being said, the sculpture has also been vandalized because Palestine is not depicted as a separate country from Israel.

For his part, Wallinger has stated that he will respect the decision of the school, stating to the Art Newspaper that ‘“the UN is the authority as to the names and borders’, whereas his own globe represents ‘the world, as we know it from a different viewpoint; familiar, strange and subject to change’”. At the same time, Wallinger also demurred by claiming that these difference in coloration were an “error.” As also pointed out by the Art Newspaper, LSE director Minouche Shafik may be regretting stating that “This bold new work by Mark Wallinger encapsulates what LSE is all about.”

That the sculpture is located outside LSE is a particularly sensitive issue for Taiwan, seeing as current president Tsai Ing-wen holds a Ph. D from LSE. Apart from condemnations by Tsai and Minister of Foreign Affairs Joseph Wu, Taiwan’s representative offices have sent a letter of disapproval to LSE. LSE administration has so far claimed that no changes were made to the sculpture, however. Two British members of parliament, Nigel Evans and Lord Rogan, co-chairs of the British-Taiwanese All-Party Parliamentary Group, have also been critical of LSE’s actions, emphasizing in a letter that Taiwan has never been part of the People’s Republic of China. University of Miami political science professor June Teufel Dreyer has also been among those critical.

The most interesting development regarding the controversy, however, may be the mobilization of UK-based overseas Taiwanese students after the controversy. A petition started by Lee Bo-yi, a Ph. D candidate studying at King’s College in London, calling for LSE to reverse its decision, has been signed by more than 10,000 individuals.

Lee is notably a member of the Central Standing Committee of the New Power Party (NPP), as one of the recently elected members of its Central Standing Committee elections in February. Lee normally serves as a legislative assistant and thinktank researcher for the NPP, while also completing his Ph. D in management at King’s College. Lee has published op-eds defending the petition in response to comments by Taiwanese LSE professor Shih Fang-long arguing in support of the school’s actions and in response to what she claimed was respecting the artist’s decision.

We ask @LSEnews to withdraw its decision and let the sculpture #TheWorldTurnedUpsideDown to remain its original appearance – #Taiwan is a country, not part of China. Sign the petition NOW: https://t.co/p5InKDX5c0@guardian @BBC_CurrAff @BBCNews @UN @CulturalTaiwan @MOFA_Taiwan

Likewise, the petition has been in large part circulated by the Formosa Salon, a Taiwanese NGO based in London that was founded after the 2014 Sunflower Movement. The Formosa Salon is a number of international NGOs or organizations comprised of Taiwanese students studying overseas that were formed as a product of the wave of student organizing among overseas Taiwanese students during and after the Sunflower Movement, usually modeling themselves after the Philosophy Friday lecture events held across Taiwan weekly. In the years before the Sunflower Movement, Philosophy Fridays, originating from the coffee shop Cafe Philo, served as a means for political discussion of social issues.

The NPP, which also emerged from the Sunflower Movement, has at times recruited from individuals that emerged from such organization. Apart from Lee, NPP city councilor candidates Hsiao Hsin-cheng and Lin Yen-fu, the latter of which was victorious in his election bid, were associated with Cafe Philo NY, for example.

As such, responses to the LSE globe controversy have reflected the growth in overseas student organizing by young Taiwanese students in the wake of the Sunflower Movement. However, it is another question entirely as to how LSE will react to such criticisms.