The NPP and DPP Split on the Referendum Vote

WITH THE NATIONAL referendum scheduled for next month, notably, the DPP is the only political party represented in the legislature that will stake out a “no” vote on three of the four referendum questions. This includes the NPP, a fellow pan-Green party, voting in approval of three questions that the DPP intends to call on its supporters to vote down. However, this is probably ultimately driven by the NPP’s need to distinguish itself from the DPP more than anything else.

In particular, the NPP was founded after the 2014 Sunflower Movement by activists who were involved in the movement. The NPP was one of the post-Sunflower “Third Force” parties that sought to distinguish themselves from both the KMT and DPP, taking the view that the DPP had grown corrupt in its years in office during the Chen administration and was not distinguishable from the KMT on some issues. The NPP and other Third Force parties tended to be more staunch in support of Taiwanese independence and more politically progressive than the DPP and called for transcending traditional pan-Blue versus pan-Green distinctions in Taiwanese politics. 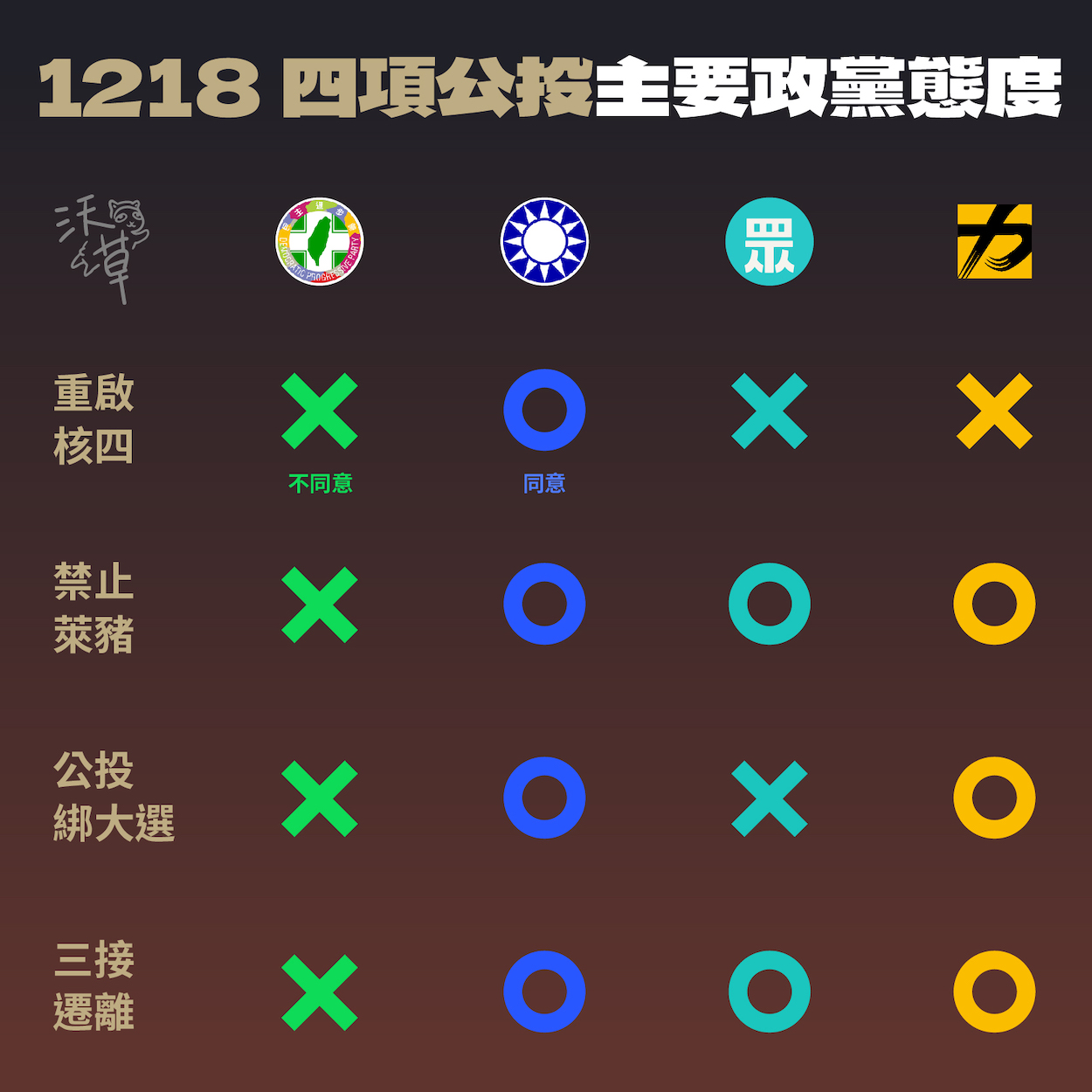 Infographic by Watchout on the positions of the four major parties in Taiwan. Photo credit: Watchout/Facebook

The NPP encountered splits after 2018, however, with the KMT seemingly having a chance at the presidency with Kaohsiung mayor Han Kuo-yu’s meteoric rise from obscurity to superstardom. Namely, the NPP could not settle on the issue of whether to endorse Tsai Ing-wen or not, leading major party members to depart the party. Although the NPP did eventually endorse Tsai in a lukewarm manner, the damage had been done, with the NPP perceived by some members of the pan-Green camp as only opposing the DPP out of rote opposition and proving little different from the KMT. The rise of the TPP, as a light blue political party that has embraced similar rhetoric to the Third Force of being beyond pan-Blue and pan-Green distinctions, likely did not help matters.

The four issues up for referendum are on the nuclear restart of Lungmen Reactor No. 4, on blocking American pork imports, on the construction of a liquified natural gas (LNG) terminal off the coast of Taoyuan, and on whether the date of future referendums should be on the same day as elections.

The NPP’s position on the LNG plant is likely due to siding with environmentalists that have long opposed the LNG terminal due to the fact that it would threaten a coral reef off the coast of Datan. Opposition to American pork imports was also a stance historically held by the pan-Green camp, seeing the DPP opposed such pork imports when the KMT tried to open up Taiwan to it; this is an issue on which the DPP and KMT have switched positions between when in office and out of it. That being said, the DPP instituted a now-ubiquitous labeling system for American pork when it opened Taiwan to US pork imports, and most stores in Taiwan do not use American pork, indicating this is the case through the labeling system.

The NPP likely pushes for reinstating the referendum on the same day of elections because it believes that it can politically benefit from this, insofar as small parties may be able to electorally gain from leveraging on referendum issues. To this extent, it was originally the DPP that pushed for a lowering of the benchmarks needed to hold national referendums, before it split the day that referendums are held on from elections in order to prevent the KMT from using referendums as part of their electoral strategy in the future.

More generally, the NPP has long faced internal pressure to electorally differentiate itself from the DPP in terms of its policies. The NPP fears being a “little green” party indistinguishable from the DPP whose political future will be determinant on whether or not it has the DPP endorsement in areas where the DPP has decided not to run a candidate. 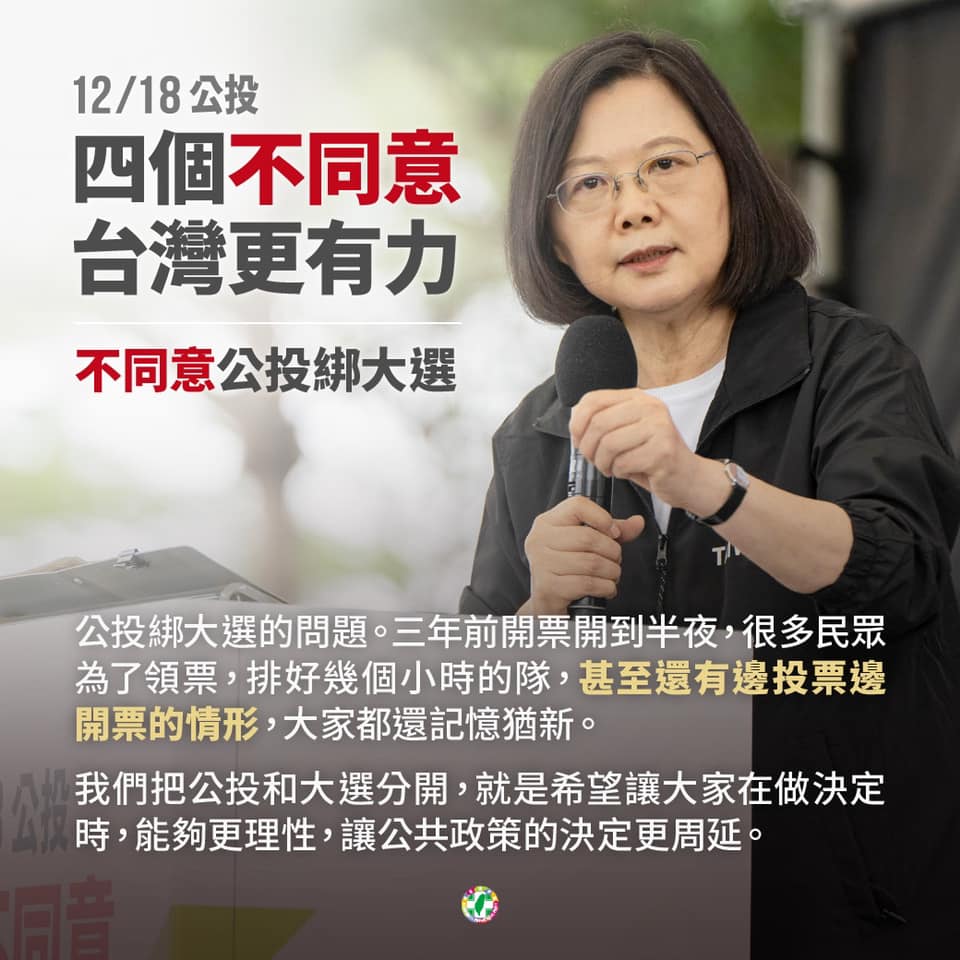 Yet one can see how the NPP’s opposition to the DPP on three of the four referendum issues does not surprise; in this frame, the NPP is adhering to older positions of the pan-Green camp. On the other hand, it is somewhat harder to understand why the TPP has decided to stand with the KMT and oppose it on the issues that it does. For example, the TPP could also gain from tying the date of referendums to elections. However, one notes that the Lungmen Reactor No. 4 is controversial even among pro-nuclear advocates because of its use of mixed parts, which may explain the TPP’s opposition. Much as how the NPP faces pressure to differentiate itself from the DPP, the TPP likely faces similar internal pressures to differentiate itself from the KMT.

Nevertheless, the NPP’s stance against the DPP is likely to occlude the possibility of any alliance between the two parties going forward, even if the NPP’s actions are driven by its desire to set itself apart from the DPP. As such, the DPP is not likely to back down from areas in which the NPP is attempting to field candidates and is more likely to directly compete with the NPP. On the other hand, it is more likely that the KMT will be forgiving of the TPP for challenging it on some referendum issues, with the KMT currently needing to maintain what allies it has at present at a time in which the pan-Blue camp is broadly on the defensive. With the DPP currently holding the political cards, this is not likely to be a priority for the DPP vis-a-vis the NPP.