THE INTERSECTION OF art, culture, and politics in Taiwan can be quite surprising at times. For example, no less than Ko Wen-Je’s campaign manager is the famous novelist and poet Xiao Ye (小野), who also was one of the organizers of the 4-5-6 Movement anti-nuclear protest in the years before the Sunflower Movement and the scriptwriter on such seminal Taiwanese films as Edward Yang’s Terrorizers.

During 2016 presidential and legislative campaigns and before that, during 2014 nine-in-one elections, political forces including Ko Wen-Je, the DPP and Third Force parties that had emerged after the Sunflower Movement aimed to capture the youth vote through innovative, artistic, even experimental forms of campaign advertising. This included campaign ads resembling cinematic short films more than anything else, a sleek, modern campaign aesthetic which brought onboard some of Taiwan’s most promising young artists and designers—some of which had played a key role in the Sunflower Movement—and creative experiments such as “Taiwan Melody,” a site for people to vote on songs submitted about Taiwan.

Notably, with young people increasingly jaded with the DPP, such aesthetic experimentalism has generally faded from the DPP or even the Ko campaign. This is with some exceptions, such as a campaign ad from Keelung city council candidate Jiho Chang, a former student activist, that became a viral hit, especially among Keelung residents. In the ad, featuring a toy truck, Chang vowed not to use the loudspeaker trucks that are a staple of Taiwanese elections, which move through city streets blaring campaign slogans but are hated by many city residents because of their disruption. 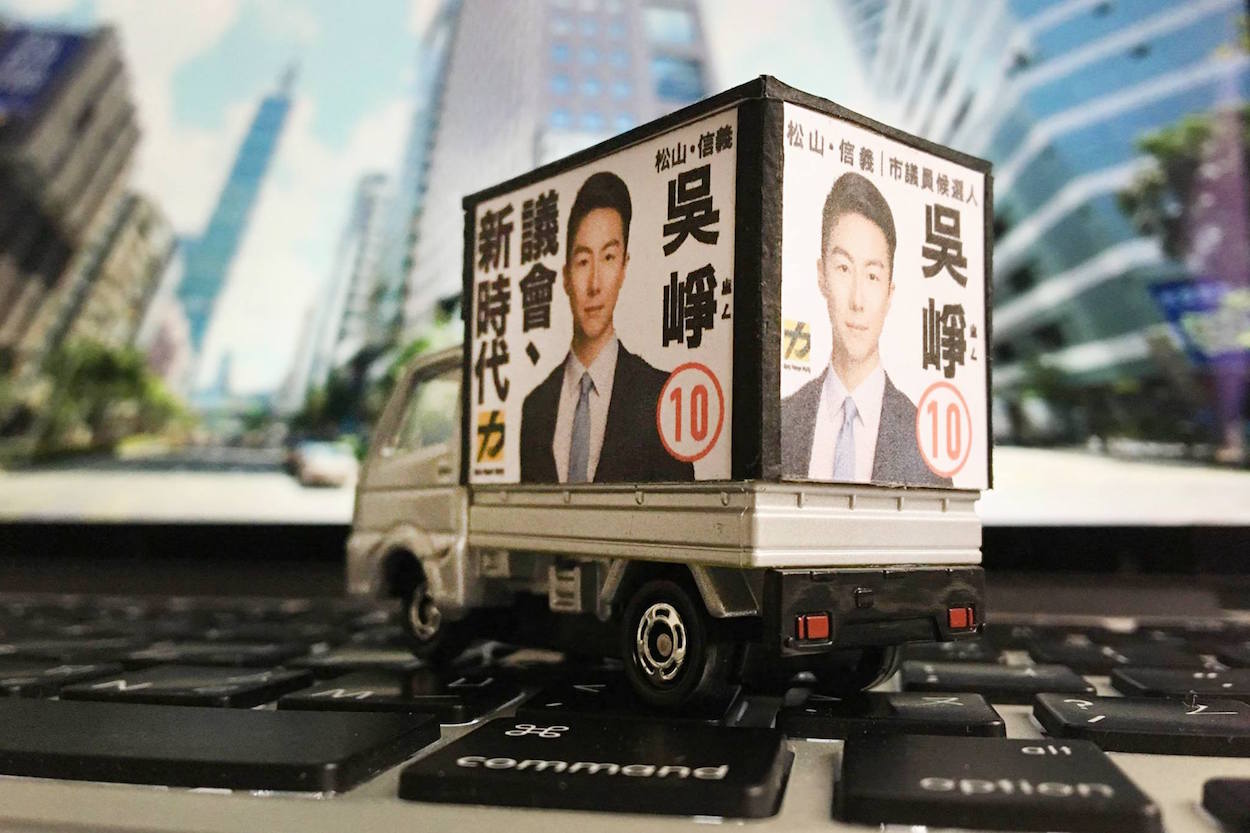 Campaign ad by Wu Zheng of the NPP referencing Jiho Chang’s earlier ad, released as part of a statement by Wu as to why he would be employing loudspeaker trucks. Photo credit: 吳崢前進松山信義/Facebook

In general, it remains a concern among the Third Force that they are outgunned by traditional parties such as the DPP or KMT in terms of advertising because of their lack of sufficient funding. This is true even among the NPP, the largest of the Third Force parties and by far the party with the most resources. Your average campaign billboard costs 30,000 NT, for example, which is about an average month’s salary in Taiwan.

This led some Third Force parties to try and rely more on Internet-based advertising during 2016 elections, which has continued in 2018, particularly through the use of graphics, animations, or campaign ads. Examples include Third Force parties using slideshows shared through social media to make policy points, and also using creative campaign videos.

In particular, the NPP has made a number of short films, some of which are highly comical or fantastical in nature, such as an ad featuring party chair Huang Kuo-Chang as the owner of a lottery store, or ads involving time freezing. The NPP has also made forays into animation in some of their ads. NPP candidates also frequently hold livestream shows on Facebook in order to directly communicate with voters through social media and the NPP frequently releases videos of its legislators questioning political opponents in the Legislative Yuan, sometimes to much public attention. At this point, party chair Huang Kuo-chang berating opponents is perhaps a form of viral video category in its own right. 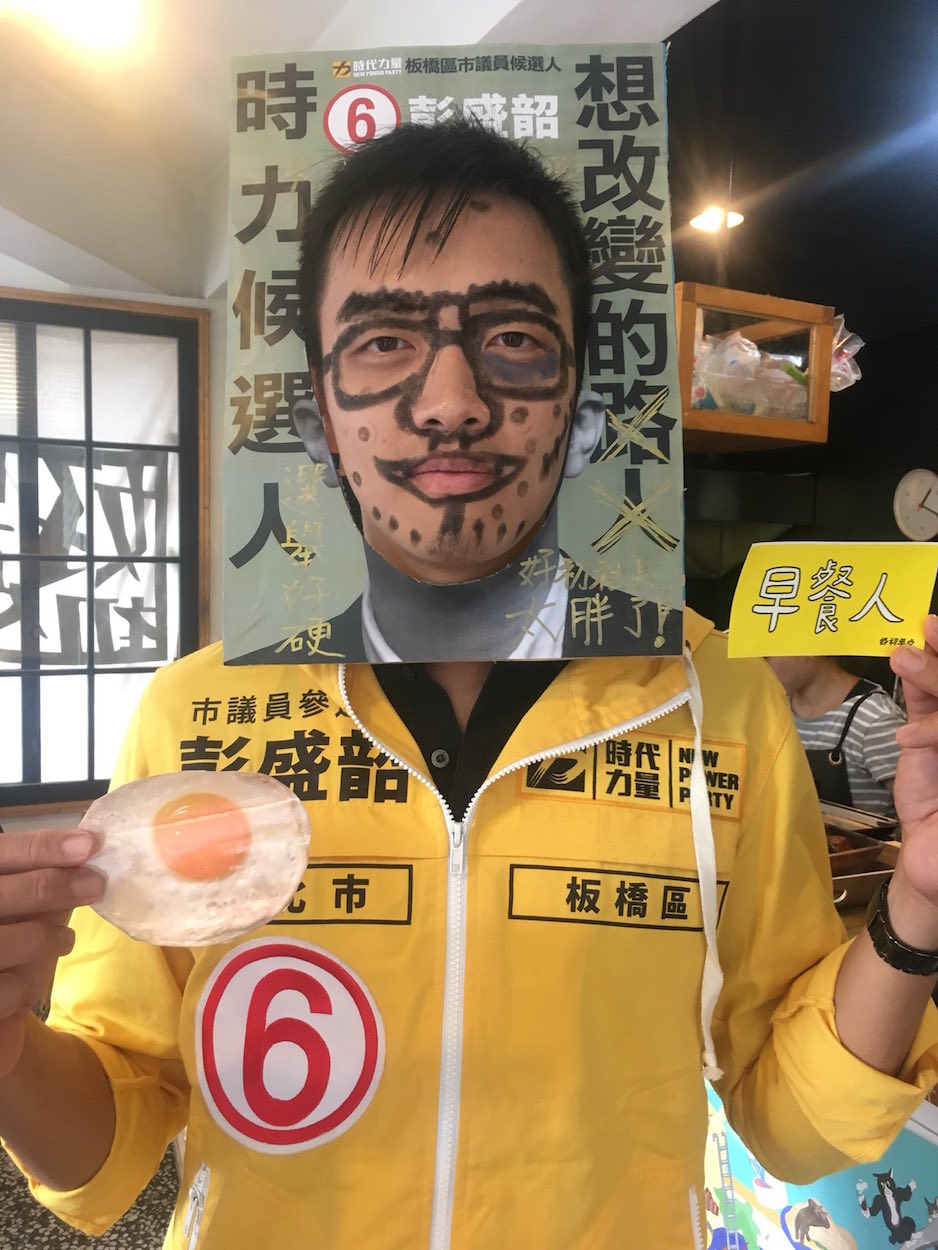 The use of creative Internet-based advertising from Third Force continues to play an important role, but Third Force parties have also sought to use traditional forms of advertising to their advantage, oftentimes through the use of humor. For example, Liu Shijie of the SDP would draw much attention because of a campaign ad which featured Xi Jinping, raising the issue of Chinese influence on Taiwan. Hsiao Hsin-cheng of the NPP would draw attention for a campaign billboard with a slogan mocking a neighboring KMT billboard whose slogan was “Speaking up for Nangang” with the slogan “Actually Doing Things for Nangang.” Saul Peng of the NPP has also gained attention for humorous Internet videos and self-mocking advertisements. NPP candidates have also taken to wearing bright, electronic walking billboards while canvassing, as another way of drawing attention to themselves.

As handing out campaign items to prospective voters is another common practice of Taiwanese politics, this usually taking the form of tissues or fans, candidates have also sought to be creative in the kinds of goods they hand out. Liu Shi-jie of the SDP, for example, has handed out coffee packets with his image branded on them, and several NPP candidates have packets of toothpicks that they hand out. You Yi of the SDP also adopted handing out bananas as a campaign good, since bananas were cheap and this would also benefit Taiwan’s farmers. Chen You-xin of the SDP, citing concerns that campaign goods usually say very little about policy on them, includes QR codes to his policy statements on his campaign goods. 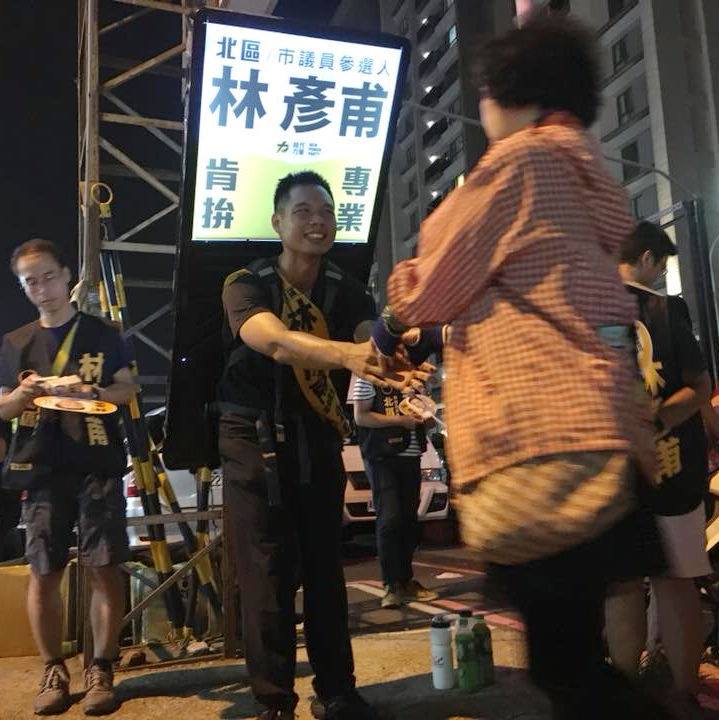 Third Force parties have generally mixed traditional methods of campaigning, such as canvassing, participating in neighborhood activities, offering services to lizhang, along with newer, more innovative actions. This would be in order to compensate for their lack of resources.

As with past years, legislator Freddy Lim of the NPP has also continued to combine elements of his musical career as a heavy metal singer with his political career, performing at campaign events. The NPP did not organize a large, musically-themed party rally as it did in 2016 elections, however, instead opting for Lim’s band Chthonic to perform at a marriage equality rally and for Chthonic members to hold livestream sessions with NPP members. 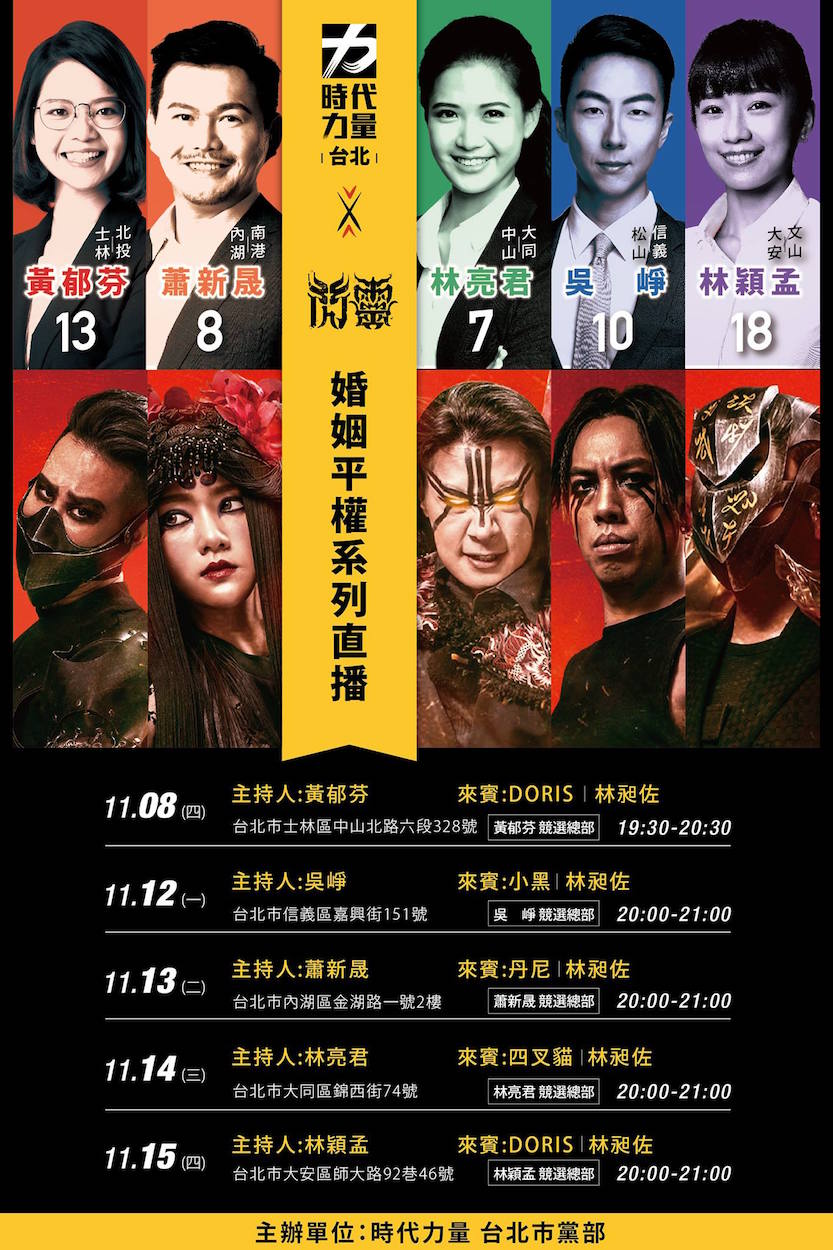 It remains to be seen whether this will be successful for Third Force parties in upcoming elections. Nevertheless, it has been widely noted that pan-Blue parties, including the KMT and the New Party, have taken to imitating the advertising of Third Force parties in their flyers and billboards. Supporters of KMT Kaohsiung mayoral candidate Han Kuo-yu, the one KMT mayoral candidate who seems to have had resonance with young, have also demonstrated a pattern trying to imitate the campaign videos reminiscent of those produced by the DPP and Third Force parties in 2016 elections through a campaign ad claiming that Han helped one of his supporters return to Kaohsiung from Taipei to vote.

Third Force parties continue to be highly innovative, even experimental in their campaign advertising in 2018 elections, then. This is probably one of the key contributing factors as to why Third Force parties have managed to influence political discourse in a manner disproportionate to their actual size.