New Bloom editor Brian Hioe interviewed Stuart and Lance Chen-Hayes, who recently published Double Dads One Teen: A Queer Family’s Trailblazing Life in the USA and Taiwan, by e-mail, following a meeting in Taipei. Lance is Taiwan’s first out gay dad and their nonbinary teen, Kalani, recently became the first Taiwanese citizen with two father’s names on both an international birth certificate and an international marriage license. Their conversation is below.

Brian Hioe:  Could you first introduce the two of you, as well as Kalani, for readers that may not know you? Can you talk a bit about the book you just published in short?

Stuart Chen-Hayes: We are Stuart and Lance Chen-Hayes and we are a gay couple who have been together for 25 years. Lance was born and raised in Taichung, Taiwan and immigrated to New York City for graduate school in physical therapy in 1990. Stuart was born and raised in suburban Chicago, Illinois and worked as a professional counselor for years before earning his Ph.D. in Counselor Education and becoming a professor. 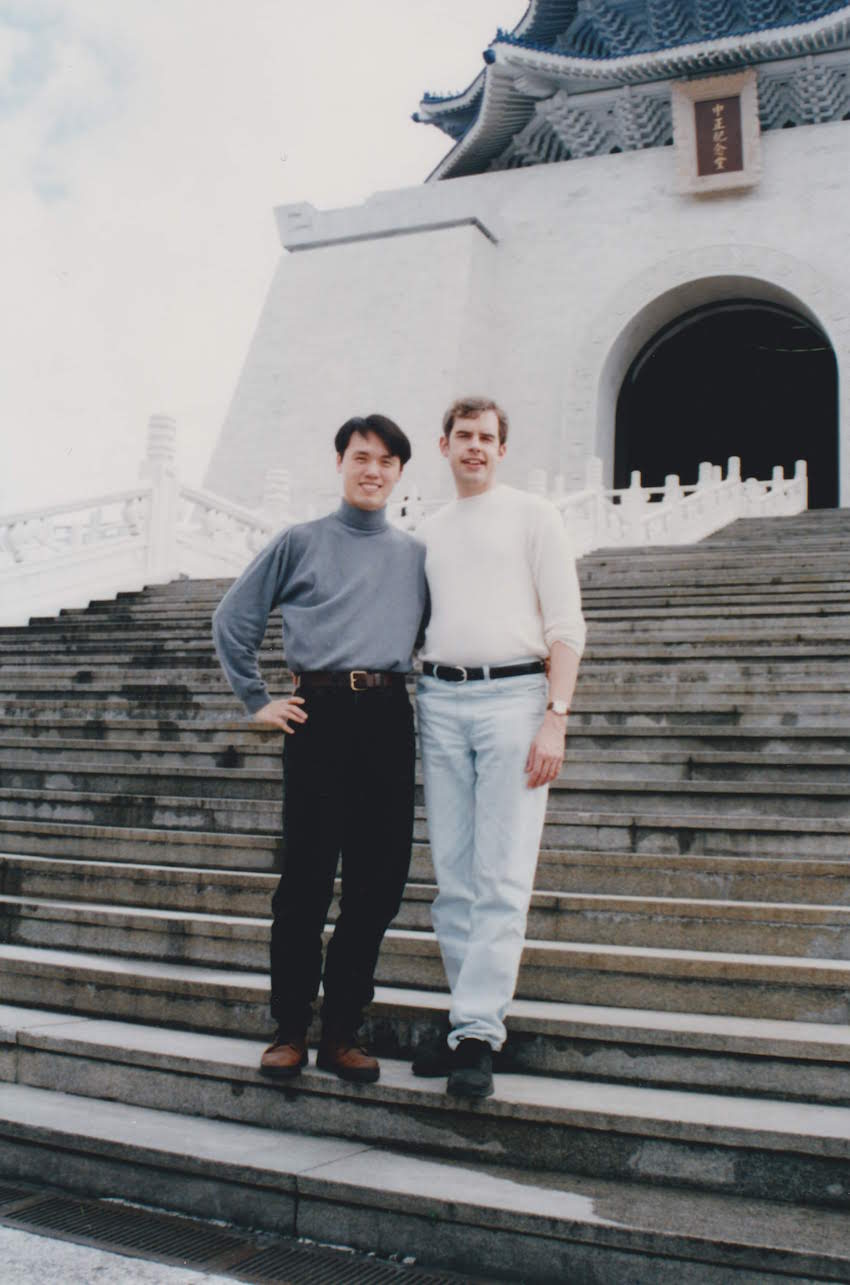 We met in Chicago in 1995 and have been together for 25 years since. Kalani is our nonbinary teen who was born via surrogacy. My sister, Alison Hayes, volunteered to be our surrogate. Lance is now retired after 31 years as a doctoral-level physical therapist and I am in my 26th year as a professor of Counselor Education and my 21st year at City University of New York’s Lehman College, where I coordinate the master’s program in school counseling. So we are a two-generation queer family. Lance is Taiwan’s first out gay dad and Kalani became the first Taiwanese citizen with two father’s names on both an international birth certificate and an international marriage license in 2018. Both Lance and Kalani are dual nationals.

Lance Chen-Hayes: We also have done many public speaking events and presentations both in Taiwan and in the USA. I was the first out gay dad interviewed by Taiwan’s media. We’ve since appeared in Taiwan’s newspapers, magazines, radio, TV, and online media. We believe that personal stories are powerful in helping people understand LGBTQ issues and inspiring LGBTQ people to envision a positive outlook in life. So our book that chronicles our life stories is part of our story-telling journey.

BH:  How did the writing of the book come about? What were the challenges faced in getting it published?

SCH:  Twelve years ago we were both on sabbatical in Taiwan and co-taught Taiwan’s first sexuality counseling course at National Changhua University of Education in a bilingual format and invited by Dr. Sharon Shu-chu Chao. I also taught a section of doctoral students in English. Dr. Chao asked me to write up our family story for publication and the result was published this year by DIO Press in English. The Mandarin version, co-authored with Lance as the lead author, will debut in Taiwan in the Spring of 2020.

The biggest challenge was finding a publisher who felt they had an audience and a market for it as it crosses so many different publication genres: parenting, social justice, schools, sexuality education, surrogacy, dual national issues, LGBTQ+ issues, legal issues, oh and a love story, too. The first publisher we offered it to in Taiwan said that they would publish a translation if I had it published in English first. The LGBTQ press I sent it to next in the USA loved it but said they had no market for it. I then waited and added more stories. I then sent it to another Taiwanese press that publishes in English but they declined not sure of their ability to market it. 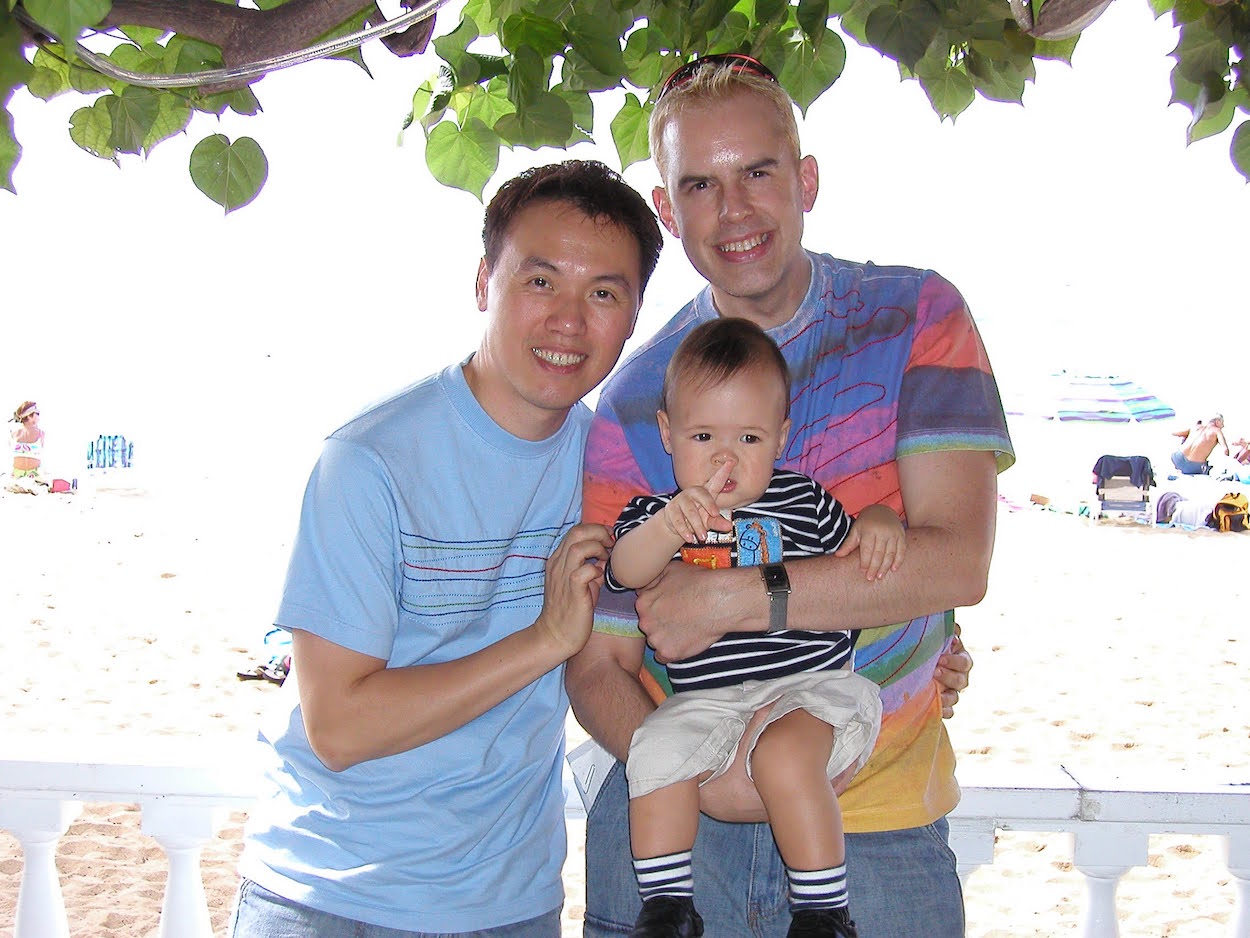 Then last summer we received an offer to publish it in Mandarin by a small academic press who then shopped it to a major Taiwan commercial press who is planning to publish it with Lance as the lead author next spring. Last November, a colleague in NYC told me about a new publisher focused on social justice who was seeking manuscripts and I shared the draft and had a contract a few days later as they loved the story and felt the focus on Taiwan gay marriage and sexuality education activism was a perfect timing for marketing both in Taiwan and worldwide. The irony is DIOPRESS Inc. is located a mile west of where I teach at CUNY Lehman College, but the CEO lives in Kaohsiung. The book went from contract to print in just over 3 months—a rare event in the publishing world.

LCH: I can elaborate a little bit more on the planned publication of the Mandarin version of our book. Two years ago, when we visited Taiwan, a former coworker asked me if we planned on writing our story into a book because she has seen our work in educating the public in Taiwan throughout the years. I shared with her that Stuart has already written the book but we were still looking for a publisher. Being a strong ally to the LGBTQ community, she immediately volunteered to sponsor the publication of the Mandarin translated version of our book to be published by her brother’s small academic press.

After I spent several months translating our book and sent over the manuscript last October, they consulted with a major commercial publisher in Taiwan and recommended that I rewrite the Mandarin version from my perspective with Stuart as co-author. This way Mandarin readers could better connect with our stories and they can market the book better with a native Taiwanese as lead author in Mandarin. So we have two different versions of our book in language, style, and content.

BH:  Who is the target audience for the book? What do you hope to accomplish in publishing it? Do you hope to be able to affect the marriage equality struggle in Taiwan?

SCH:  Everyone! Especially LGBTQ folks and allies who seek to understand how to strengthen queer couple and family relationships, and to learn various rituals that we’ve used to strengthen our family, as well as the need to get involved in legal and political and school advocacy and leadership whenever possible across multiple cultural identities and two countries. We know our story has inspired many LGBTQ folks to also become parents in Taiwan and we hope that the story will assist in bringing gay marriage to Taiwan as well as protect K-12 comprehensive sexuality education and, one day, we hope, bring surrogacy legally to Taiwan. 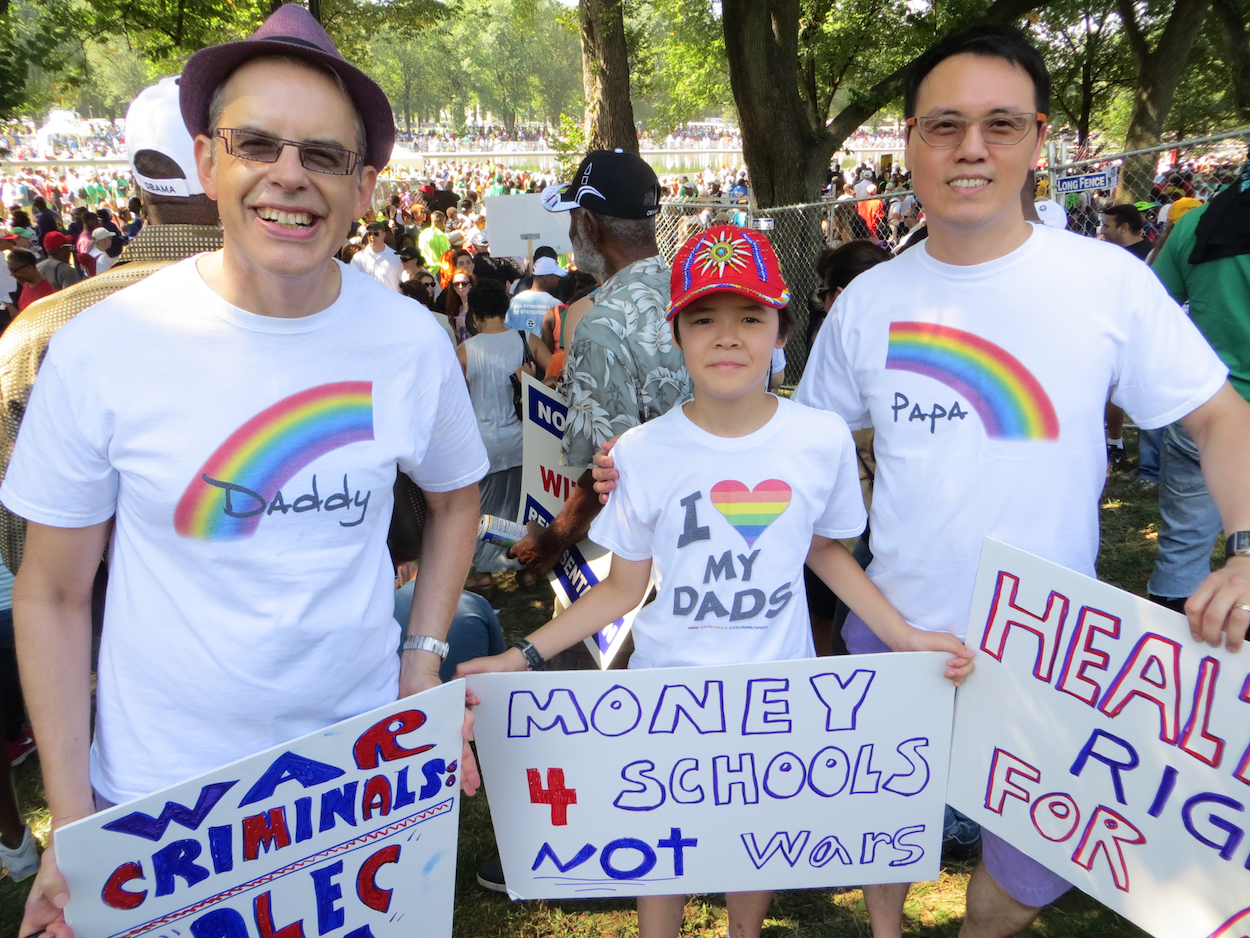 LCH:  Yes, our book advocates for marriage equality and comprehensive sexuality education and surrogacy. In addition, the theme of our life stories has been about social justice and how we infuse it in parenting. After the editors read my Mandarin manuscript, they felt that our stories can inspire parents, gay and straight, to parent their children more equitably. So, like what Stuart says, our book is for everyone!

SCH:  We’ll do a series of book signings and readings in the northeastern US (New York City, New Jersey, Philadelphia) as well as the midwest (Chicago, Indiana, Ohio) in the coming months and in Seattle in August. It was just featured at the American Educational Research Association conference in Toronto and we did two presentations in Taiwan for the book’s debut in March, and we will return next March for the debut of the Mandarin version and then do extensive readings, book signings, and guest lectures, and interviews in the media in 2020 in Taiwan. It’s fun to honor our story in both languages as folks have more of an emotional connection to the material when it is in their original language. We’ve also been filmed for a documentary by CUNY professor Larry Tung, and “My Rainbow Family: Double Dads and One Queer Teen” will be released this year to international film festivals and it ties in perfectly with the release of both versions of the book.

LCH:  After the Mandarin version is published. I will reach out to all of my connections and networks in Taiwan to make people aware of this book, especially those in education, media, and LGBTQ communities.

BH:  How has the reception of the book been to date? Have there been any reactions against the book from conservatives, American, Taiwanese or otherwise? What about responses from the LGBTQ community in Taiwan and America?

SCH:  So far so good. I’ve only had positive feedback. I suspect once the Mandarin edition is out that we will see more mixed feedback, especially in Taiwan. But we’ve had very positive reactions to our other media appearances in print and video in the USA and Taiwan for years, so we expect more of the same. 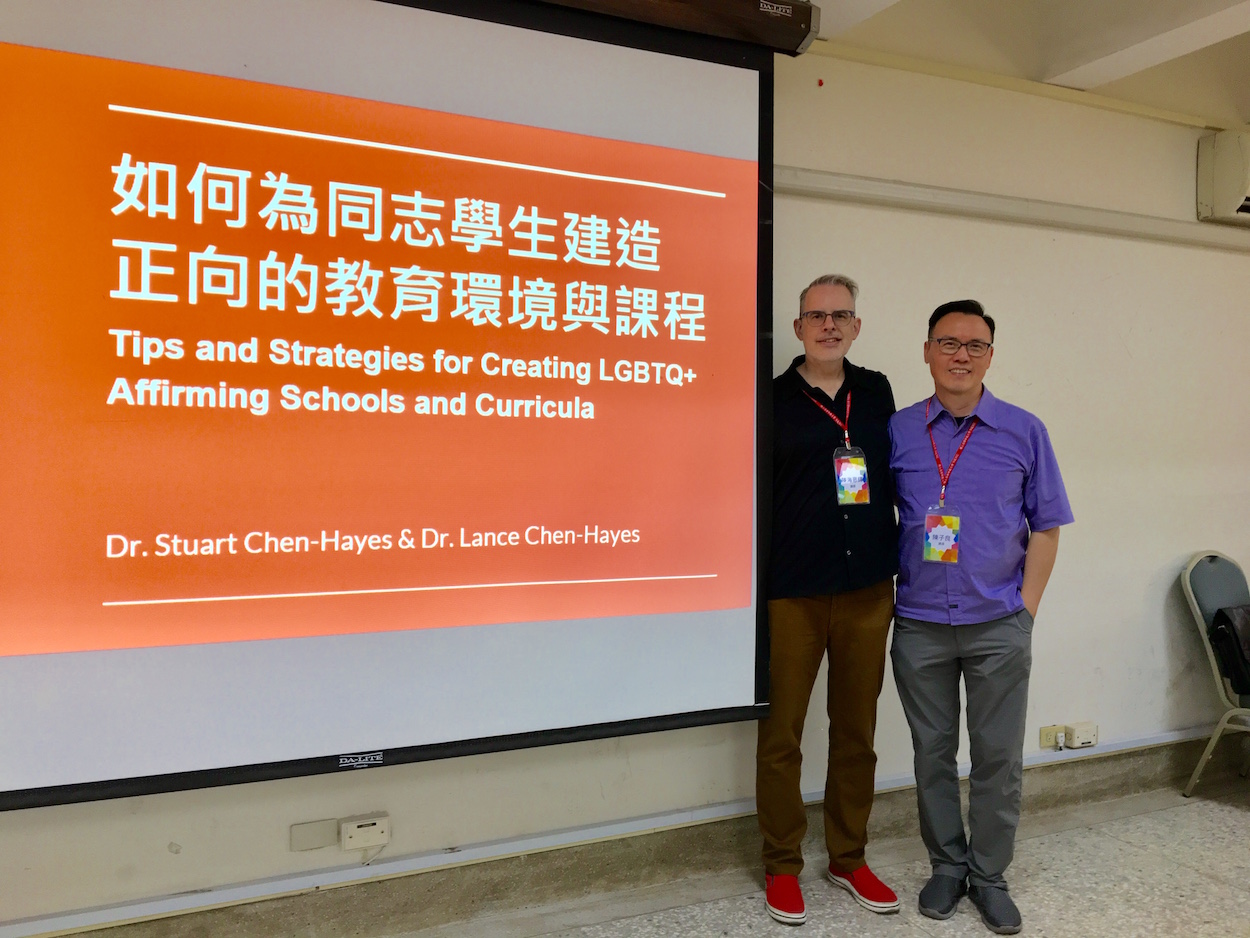 BH:  What are plans going forward now that Kalani is the first dual national with two fathers in Taiwan? How will this affect the marriage equality struggle in Taiwan?

SCH:  Kalani will apply for colleges outside the USA for the fall of 2020 and so we’ll see where Kalani’s career path goes after college. Lance and I plan to retire to Taiwan in 12 years, so we’ll be there. Kalani’s having received dual national status in 2018 was really inspiring for our friends in the LGBT parent movement in Taiwan as it sets a legal precedent for others seeking to do the same. It adds to the momentum for the need to validate and affirm LGBT folks as a part of marriage equality. We’re humbled and honored to have raised awareness and added a legal precedent toward marriage equality.

LCH:  Equal rights for LGBTQ people are not only about marriage rights but also parenting rights and equal protection in all aspects of life. I’ve spoken with many gay and lesbian parents in Taiwan. For those who have done surrogacy or given birth outside of Taiwan, they often choose to have only one parent’s name on the child’s birth certificate. It’s easier for them to apply for their children’s Taiwanese citizenship and residency with only one parent’s name, instead of both same-sex parent names, on the birth certificate. It’s because most government clerks follow certain rules but often do not understand the laws fully. The clerks often reject any applications outside the norm. Therefore it’s important for people to know their rights and fight to set legal precedents in every possible way.