Outrage From Activists Over Police Actions During Labor Demonstration

OUTRAGE CONTINUES from Taiwanese activists regarding the actions taken by police against demonstrations against the Tsai administration’s planned labor laws on December 23rd. Police actions were undertaken by the Zhongzheng First Police Precinct which is frequently at odds with activists over demonstrations that take place in the Shandao Temple area where the Legislative Yuan and Executive Yuan are, and orders are reported to have came directly from Taipei mayor Ko Wen-Je.

Unsurprisingly, then, demonstrations worsen the relation between Ko and Taiwanese activists. Ko was voted into power in 2014 with the support of many Sunflower Movement activists, who felt that as a political independent, Ko might be above the political interests of both the pan-Blue and pan-Green camp. As such, early in his administration, Ko ordered Taipei police to take a light hand to political demonstrators. 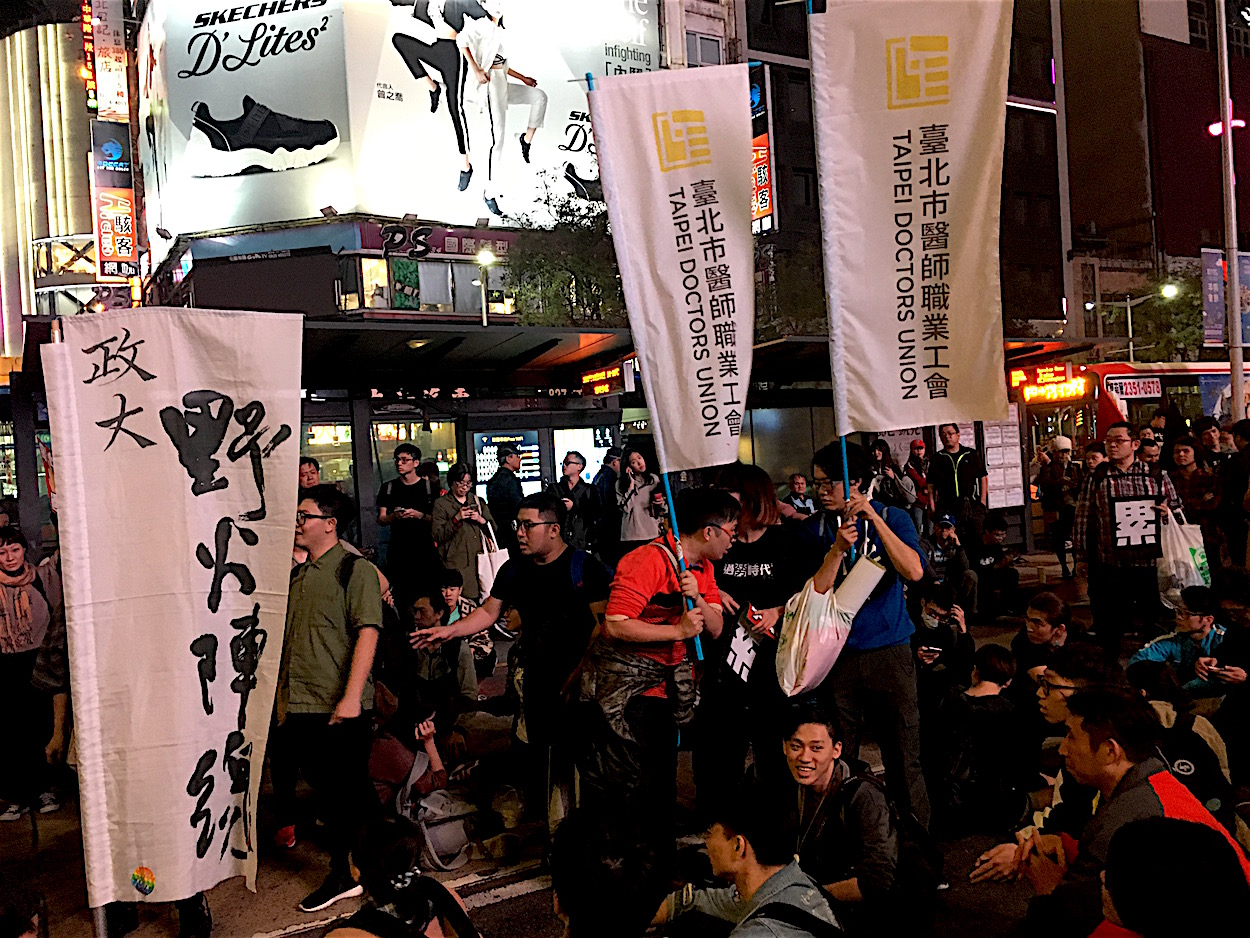 However, this has changed in the years since 2014. Ko is now seen as having gone back on a number of his campaign promises, evidencing surprisingly conservative social views regarding nostalgia for the authoritarian period or an unwillingness to remove symbols of past authoritarianism, attempts to build ties with China in a manner circumventing national policy, and even allowed actions of mob violence against young pro-independence demonstrators at NTU to take place with little police action.

In particular, several police actions were highly angering of activists. Firstly, when police closed in on fifty of the remaining demonstrators at the end of the night and encircled them them outside of Taipei Main Station, putting an end to a cat-and-mouse game between activists and police which had lasted through the night, police refused any dialogue whatsoever and remained completely silent. Police notably refused to state during the close to two hours in which police kept protesters surrounded by multiple encirclements of police, under what grounds that demonstrators were being detained and their freedom of movement restricted, even to any of the lawyers who were present and demanded this of police.

In general, police kettling is a fairly rare practice in Taiwan. In situations where they have surrounded demonstrators, police actually more often allow demonstrators to disperse instead of kettling them. But it should be noted that this more often happens for protests that take place during daytime hours when there is much media attention or police actions might provoke a fresh wave of protesters to arrive, than for protests that run into late night, past when the trains or buses are running. Among the kettled were both lawyers and journalists.

Video footage of the arrest which has provoked anger form many activists. Film credit: 公民行動影音紀錄資料庫

The police arrests that took place in the late night of December 23rd, then, with kettled individuals eventually dragged onto four police buses, were also indiscriminate, with lawyers also being arrested. Police also reportedly refused access to lawyers for the arrested, something which was sometimes even allowed during the martial law period for public arrests.

Greatly provoking of anger, however, would be an incident in which a woman being dragged onto the police bus had her shirt torn off, exposing her chest, and her pants were pulled partly down. Pictures also emerged of her hands bound not only with plastic handcuffs, but also a belt, something which is not part of standard police protocol by any means.

The last major stand-off of this nature may have taken place during the attempted occupation the Executive Yuan in 2014 during the Sunflower Movement, when the fifty members of the team that was responsible for charging the back door of the Executive Yuan were surrounded by police for several hours. But during attempted storming of the Executive Yuan, police were in turn quickly became surrounded and outnumbered by members of the occupation encampment around the Legislative Yuan, leading to a standoff which lasted for several hours and eventually ended with police releasing the individuals they had kettled because of the possibility the crowd becoming violent against police if they refused to let them go. Of course, for protests on December 23rd, there was no such crowd present. 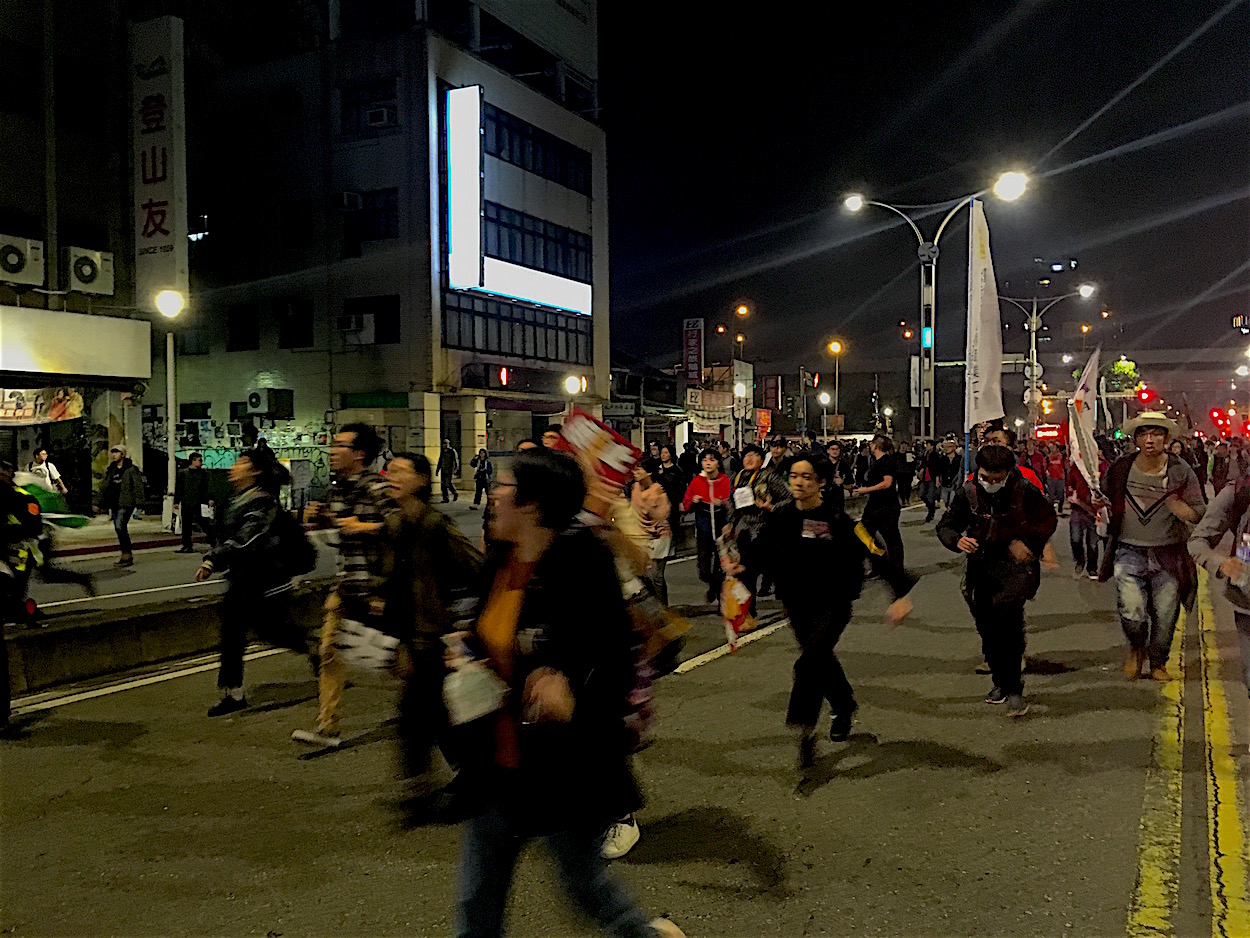 At the end of the night, protesters were dispersed between facilities in Muzha, Guandu, Nangang and Neihu. After the end of the protest, much conflict between involved labor groups persist, in fact, with infighting between labor groups over Mao Chen-Fei’s attempt to disperse the demonstration earlier that night, which prompted anger from a crowd that wished to continue protesting, but this has now been overshadowed by anger over police actions.

Activists would be among the last ones to buy the KMT’s charges that the DPP is currently instituting a “Green Terror” surpassing the KMT’s past “White Terror”—if that is so, one wonders where the tens of thousands of corpses of the executed since the Tsai administration took office are. But some lash out at the current DPP government of allowing for the reemergence of authoritarian policing practices. Indeed, anger has been stoked by other controversies in which police have taken brutal action against demonstrators, such as when an activist’s head was banged into the window of a police bus following arrest, cracking the window glass, or police inaction against members of organized time attacking college students during the Sing! China incident at NTU.

More generally, the large razor wire fences surrounding government buildings in the Shandao Temple area present poor optics for the Tsai administration and do, in fact, remind uncomfortably of the martial law period. The speed of police mobilization on December 23rd, in being able to quickly set up barriers for activists running through the city streets, or to rapidly fill up key structures with riot police such as Taipei Main Station, the Ximending shopping district, the 228 Memorial Park in order to prevent their occupation, also proves frightening for many, in reminding of what the capacities of Taiwanese police to crackdown on political dissidence when they wish to. And so anger against not only the police, but also Ko Wen-Je and the Tsai administration as directing the actions of police, will likely continue to grow among Taiwanese activists. 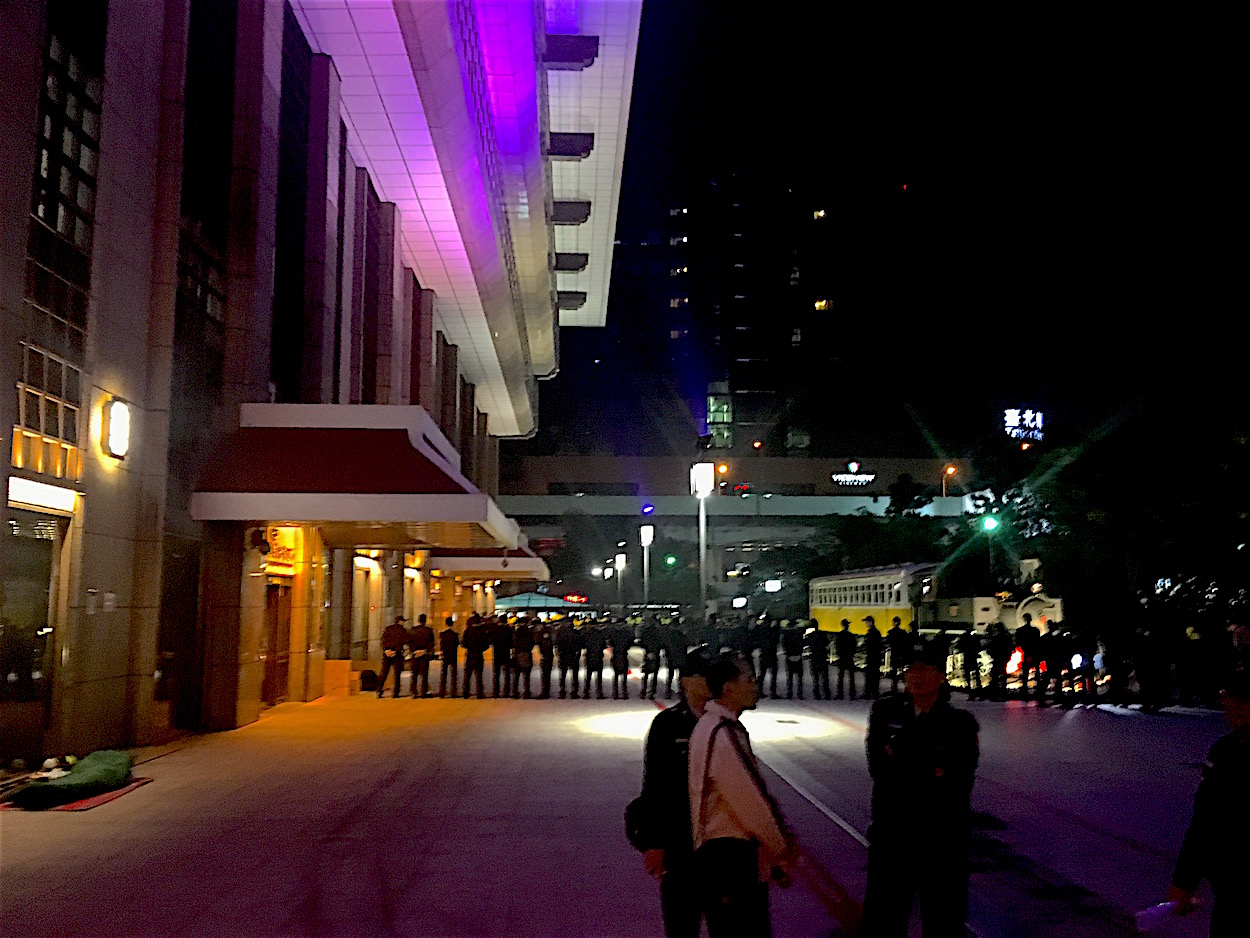 Even if protests as large and as intense as the ones which took place on December 23rd have actually received surprisingly little attention from the media and no real direct responses from politicians, anger is likely to provoke future actions from Taiwanese youth activists and labor groups. On a slightly humorous note, an unusual amount of outrage has focused on that netizens noted that that Tsai Ing-Wen was posting photos of her cat on her Facebook page, which has over two million followers, during the time that arrests were happening. This has caused some to wonder what kind of thinking leads one to post photos of cats during police crackdowns and the quip that Tsai may have been thinking, “If when there is controversy, if I post photos of cats on Facebook, the controversy will just go away.”

Yet, more generally, the willingness of youth and labor activists to take direct action on the issue has been demonstrated, seeing as demonstrations on December 23rd involved three brief street occupations of major intersections in Taipei, an attempted occupation of the Executive Yuan, and at its height, saw over 10,000 individuals participating. The issue will not go away anytime soon and it proves likely that social outrage about the issue will only continue to grow in the face of silence from the government and media. The issue is far from one that can be simply shrugged off and ignored and to do so would be a severe political miscalculation for all involved.