A SURPRISE development in US-China trade relations has been the arrest of Huawei Chief Financial Officer Meng Wanzhou in Canada. Meng is slated to be deported to the US on charges of violating sanctions, with allegations that Huawei sold goods to Iran in knowing violation of trade sanctions. These allegations stem from an American investigation that began in April.

The arrest took place on December 1st. Meng is the daughter of Huawei’s founder, Ren Zhengfei, and also a vice chair on the board. She has been seen as a potential successor to Ren. Responses from the Chinese government were immediate, with Chinese embassies in America and Canada demanding her release, and accusations from Chinese state-run media that America had arrested Meng because they knew that American companies could not compete on equal grounds with Huawei.

The arrest is perceived as a sign that America intends to take stronger steps against Chinese tech giants such as Huawei, Tencent, and Alibaba in the near future. While claims by the Trump administration that Chinese tech companies engage in deceptive trade practice and infringe on US intellectual property have been longstanding, America has also in past months attempted to discourage allies from using Huawei technology in their telecommunications infrastructure because of concerns that Huawei may be providing the Chinese government a backdoor into sensitive intelligence. Australia and New Zealand have announced that they will follow America’s example in banning the use of Huawei in telecommunication networks, and the UK, Canada, Germany, Italy, India, and Japan appear to be evaluating whether to do the same.

This would not be the first time in past years that Huawei has been accused of violating trade sanctions with Iran, as Huawei having also been accused of doing this with North Korea. But Huawei’s reach is now large enough globally that the arrest will almost certainly have a large international impact. Huawei suppliers, including Samsung, have seen drops on the stock market and the Dow Jones dropped by 800 points after the arrest. This is the fourth largest drop ever experienced by the Dow Jones.

In particular, the arrest dampens the belief that US-China ties were on the mend after a meeting between American president Donald Trump and Chinese president Xi Jinping on the sidelines of the G-20 in Argentina, with both sides agreeing to a temporary, ninety-day suspension of the trade war. But the actions of the Trump administration are as unpredictable as ever, apparently. 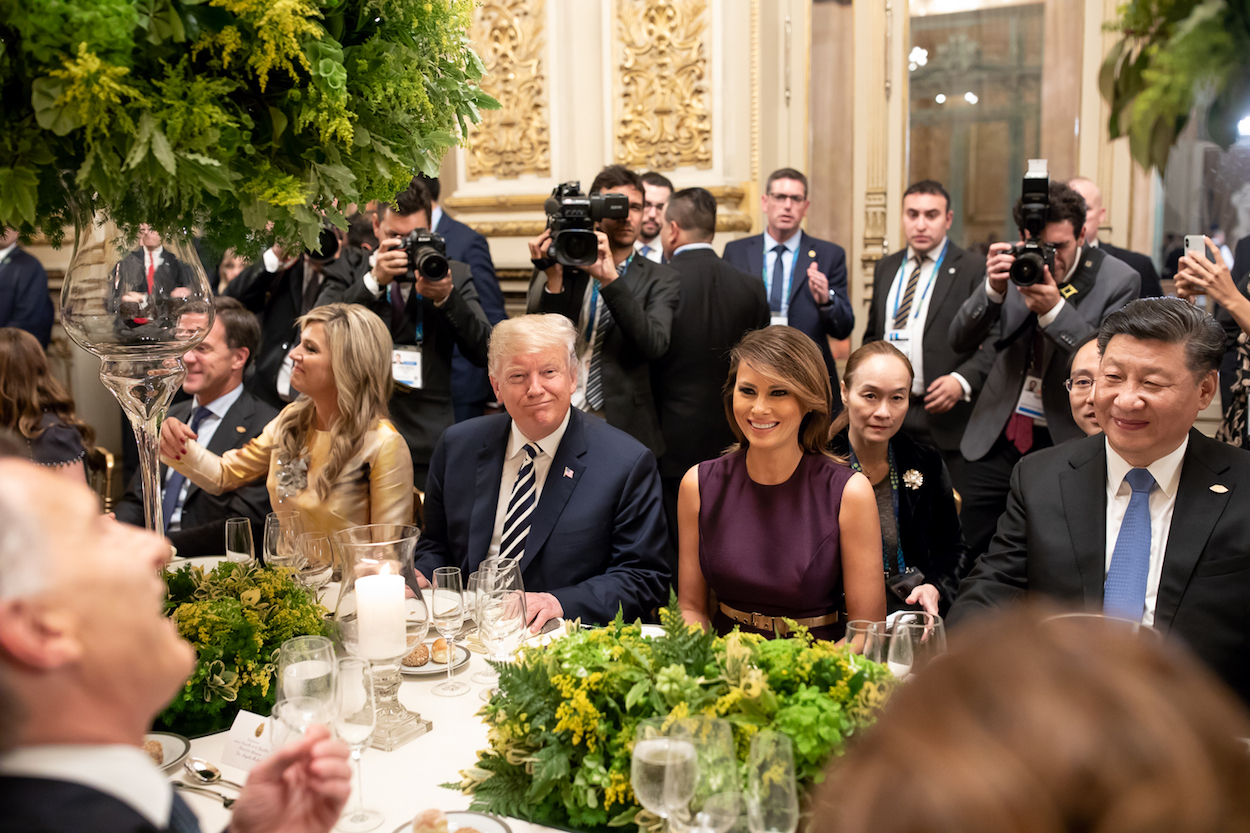 Trump and Xi at the G-20 in Argentina this past week. Photo credit: White House/Public Domain

However, it is important to keep in mind that it remains to be seen whether this sudden return to an aggressive stance against China was the result of forces within the Trump administration who were not happy with the detente with China engineered by Trump or because of Trump himself. Trump was quite vague about what the exact terms of his agreement with Xi were, offering little clarification beyond several Tweets, and some questioned whether the official American statement on the meeting between him and Xi meshed with Trump’s comments.

It is also to be questioned as to whether actions against Huawei indicate that America will pursue long-term actions against Chinese tech companies. As with America’s treatment of Chinese telecoms equipment manufacturer ZTE before it, this may involve periods of hostility towards Huawei followed by periods of rapprochement. In the case of ZTE, the Trump administration had slapped ZTE with fines over 1 billion USD in June 2018 for similarly violating trade sanctions with Iran and North Korea, but also unexpectedly promised to work with the company, this reversal of course possibly taking place after communications between Trump and Xi.

Much remains uncertain regarding American actions going forward. Furthermore, it is to be seen whether China will take any form of retaliatory action against America, such as imposing fines on American tech companies, arresting American tech company executives, or possibly having an allied country act on its behalf to extradite them. This will become clear in time.