The Worldview Of Trump’s “China Guru”

PETER NAVARRO’S appointment to hear the National Trade Council by American president-elect Donald Trump means that Navarro will have a high position in Trump’s administration. The National Trade Council is a newly formed body under the Trump administration, whose exact role remains unknown, but seems set to have a key role as a trade advisory body.

Navarro is a professor of economics and public policy at the Paul Merage School of Business, University of California, Irvine known for his anti-China economic and foreign policy stances. It is unsurprising why an individual such as Navarro, sometimes seen as Trump’s “guru” on China, would appeal to Trump. Navarro has in recent years taken to producing documentary films based off of his books warning against the economic and military rise of China, seeming to see it as somewhat of a personal crusade to warn Americans against China. These include the luridly titled 2011 Death by China: Confronting the Dragon – A Global Call to Action and the 2015 Crouching Tiger: What China’s Militarism Means for the World, both of which were adapted into films, and the former of which was narrated by Martin Sheen, bizarrely enough. Navarro seems to see it as a sort of televangelist calling in life to warn America about China. 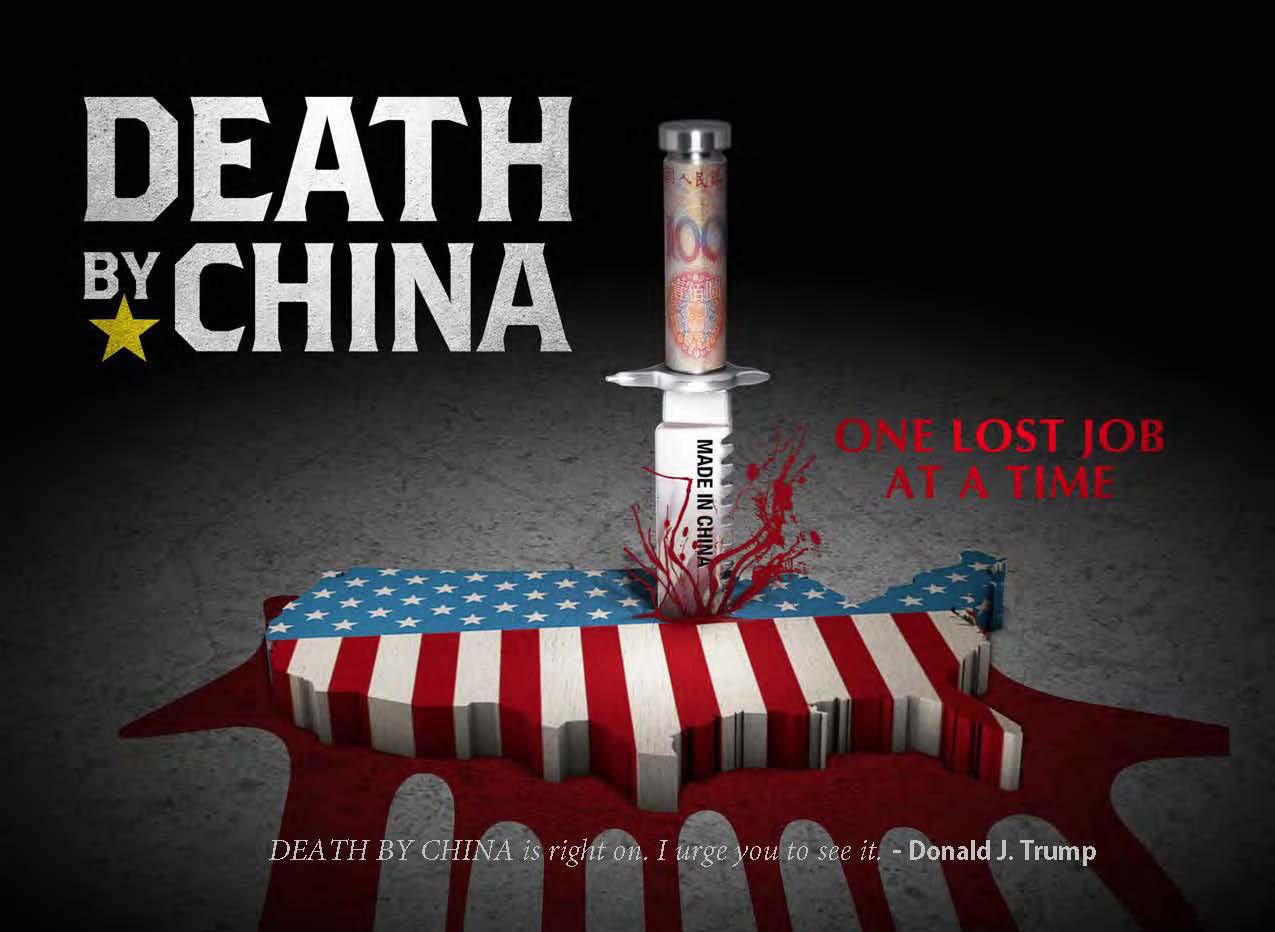 While the Trump transition team has attempted to bill Navarro as a “visionary” who will turn US trade policy around, Navarro’s ideas are hardly original, but merely present old ideas from the Cold War in updated form for the globalized world of today. As such, Navarro’s ideas are largely a rehashed version of ideologically convenient thinking as would appeal to Trump’s hardly sophisticated views on trade or foreign policy—although one also suspects that Navarro’s views remain more nuanced than Trump’s and Navarro may not necessarily fare well under the Trump administration.

For Navarro, it seems China is to blame for all of America’s troubles in the present. China is a currency manipulator, which sells poor, cheaply quality products in order to rob hardworking Americans of their jobs. Chinese production is also always able to undersell America because of China’s lack of laws protecting the environment, making Chinese production cheaper. American loss of jobs to China occurs because of multinational corporate interests, which are willing to move jobs to China in order to cut costs. America must therefore revive manufacturing jobs, which are the heart of the economic prosperity of any country. As such, Navarro also calls for trade reform with China.

On the other hand, Navarro also seems to view war between America and China, as well as war between China and American regional Asia Pacific partners as Taiwan, South Korea, or Japan as inevitable. This will occur because of the impossibility of a peaceful rise by China, in the belief that China cannot let go of perceived historical slights, and operates on a fundamentally different way of perceiving international relations than the United States.

But one must question the realistic feasibility of Navarro’s views. In a post-globalized, interlinked neoliberal world, for manufacturing jobs to return to America is impossible. This would demand America severing trade ties with much of the international world, which would be further disastrous to America’s already faltering economy.

As with the Trump campaign’s calls for reviving a former era American greatness, Navarro can easily be seen as childishly nostalgic for the era of American Fordism, with the belief that China represents something economically monstrous for producing cheaply made, poor quality goods, whereas America in its heyday produced durable consumer goods. But Navarro’s views, in this sense, are simply anachronistic and nostalgic about an imagined past era of American prosperity—neither new, nor visionary, nor grasping of the present state of the world economy. Navarro’s views about the Chinese economy in that sense, are largely reducible to ideological concerns about America, and so Navarro hardly seems a qualified candidate to handle the realities of global trade.

Likewise, Navarro’s view of world affairs fundamentally misunderstands America’s role in the world. Very rarely does Navarro raise the fact that America has significant military personnel stationed in Japan, South Korea, and the Philippines and so it is unsurprising for China to be wary of potential American threats. Even if Navarro is probably right that China’s territorial claims are set to expand, one does not need to leap to accusing China of irrationally being hung up on the “Century of Humiliation” which occurred over one hundred years ago to see cause for Chinese anxieties about America. But Americans generally fail to realize the wide reaching nature of American empire and why that might give other countries cause for alarm about American global power.

None of Navarro’s ideas are new, but simply rehashed views dating from the Cold War which ultimately resolve into calls for the economic and military containment of China. Indeed, Navarro’s views become quite clear in that Navarro sees China as actively launching a trade war on the United States through its economic policies, which he frequently employs military metaphors to describe. Though not without compassion for groups in China facing political persecution from the party-state, or even the sufferings of the Chinese working class due to conditions of economic exploitation which the CCP maintains, China remains for Navarro largely a terrifying godless, communist, monolithic mass. As such, Navarro shares the ideological blindness of Cold War thinkers, as well, and he shares all the failings of Cold War hawks.

One can see quite how his views would appeal to the Trump administration, which combines economic protectionism with calls to take a stronger stand on China, and has brought into its administration a number of Cold War-style hawks. But the paradox is that Navarro does not actually seem to be a great fit for the Trump administration either. Navarro criticizes multinational elites who do not have the American national interest at heart and so are willing to relocate American jobs to China to sell cheaply made products back to Americans. Yet, of course, Donald Trump is a good case in point of this sort of multinational elite, given the numerous cheaply produced products bearing the Trump name that Trump has sold to Americans which are actually produced in China, and Trump’s large business investments in Chinese real estate.

Navarro also is blind to the very possibility that America hardly so selfless in its diplomatic aims. Navarro, for example, scarcely ever seems to realize the fact that America may be willing to sell out its allies in the Asia Pacific if it is unwilling to commit itself to conflict with China. Of these, quite obviously Taiwan would be the first American ally to go. But Navarro thinks America seeking to use Taiwan as a bargaining chip against China is an absurd possibility to even countenance, to the extent that he seems to think that America may go to war against China for Taiwan’s sake. And so, for Navarro the possibility of America abandoning other allies such as South Korea and Japan is even more absurd.

Yet of course, we have already observed that Donald Trump has seemed willing to use Taiwan as a bargaining chip against China in recent days and weeks, never mind those who initially took the Trump-Tsai phone call as a sign that Trump was actually listening to his guru, Navarro, and signaling an American commitment to defend democratic Taiwan. It is currently unknown whether Trump will live up to campaign promises to carry out an American troop withdrawal for the Asia-Pacific, giving the conflicting signals on the matter by Trump.

Thus, with Navarro, we have a threefold paradox. First, Navarro’s views are outdated and do not reflect the world as it is. But, second, they are ideologically convenient views that Trump and his ilk may like the sound of. This could prove dangerous to global politics if they are put into practice. Yet, third, even if Navarro has been appointed to a high position under the Trump administration, this does that mean Trump and his administration will actually listen to Navarro either, given that his views do not actually square with those of Trump’s very well. We will see, then, as to what influence Navarro has under the Trump administration.