Cheng Release Is A Victory, But Points To Continued Need For Judicial Reform

THE RELEASE of former death row inmate Cheng Hsing-Tse should be celebrated as a victory for the legal advocates and activists that have fought for his release and acquittal for decades. However, what the case continues to raise is how dystopian the Taiwanese legal system can be at times, seeing as Cheng served ten years on death row and was imprisoned for a total of 14 years on inconclusive evidence.

Cheng, who was removed from death row and released on bail in May of last year, was finally acquitted last week after a retrial. Cheng was originally sentenced to death after a shootout in a Taichung KTV in 2002, in which gangster Luo Wu-Hsiung fired his guns into the roof of the KTV and subsequently engaged in a shootout with three police officers that responded. Responding police officer Su Hsien-pi and Luo were shot to death and Cheng was originally convicted on charges of shooting Su. Cheng and six others were partying with Luo at the time that Luo began firing in the KTV. 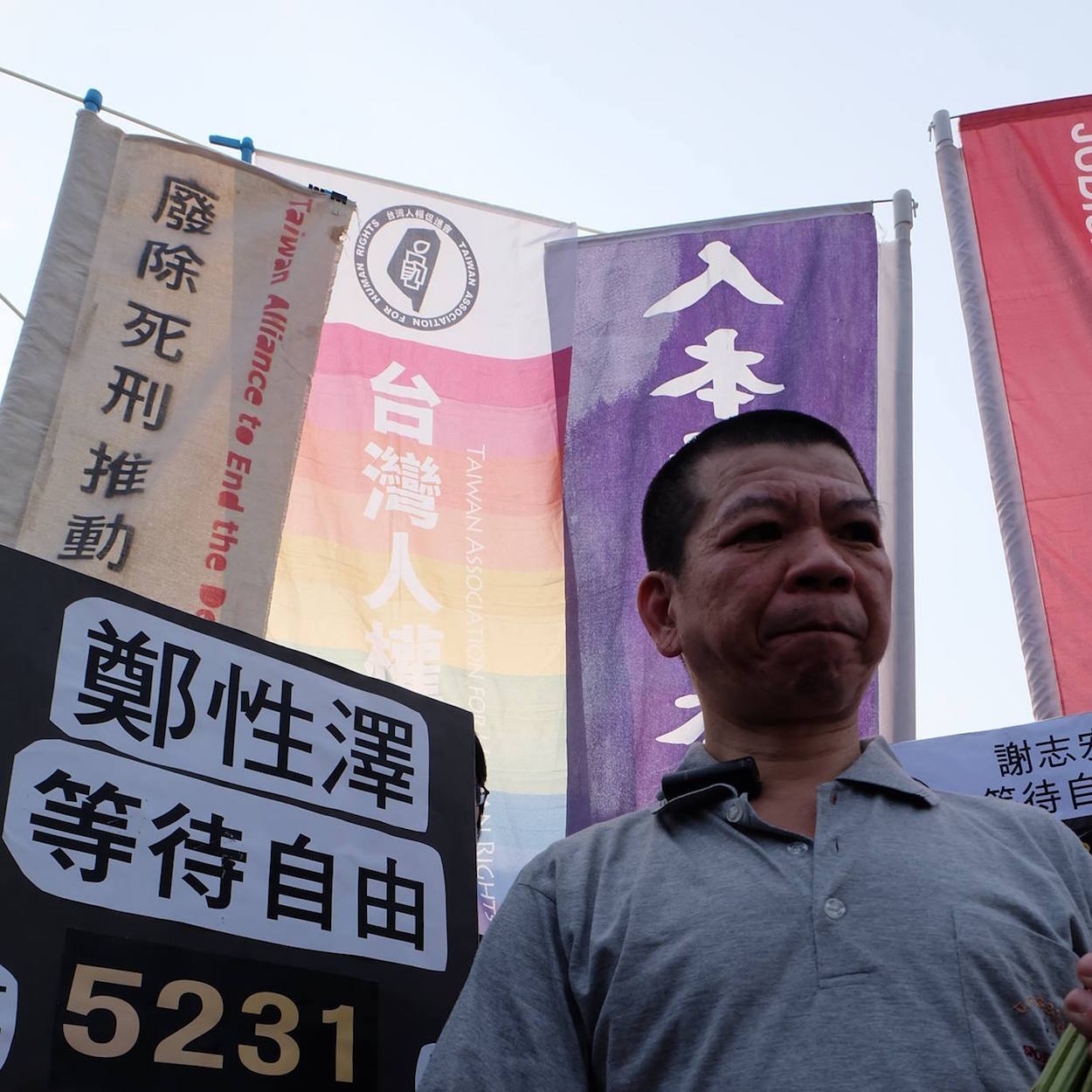 Nevertheless, Cheng has maintained his innocence throughout and it has been argued that his confession may have been extracted from him by police given suspicious injuries visible in recorded footage which were observed on Cheng’s body during interrogations. As ruled by courts with Cheng’s release, the shooting angle which led to Su’s death also made it possible that it was Luo who fired on Su. It could be, however, as some have suggested, that police were vindictive regarding the death of Su.

Unfortunately, death row cases such as Cheng’s are not extraordinary in Taiwan. The Cheng case is highly reminiscent of the decades-long struggle of death row inmate Hsu Tzu-chiang for release. Hsu was sentenced to the death penalty due to the kidnapping and murder of a businessman Huang Chun-shu in 1995. The two culprits, Huang Chun-chi and Chen Yi-lung, were found guilty and sentenced to the death penalty, but also implicated Hsu as an accomplish. However, Hsu was finally found not guilty in September 2016 after more than two decades on death row, due to inconsistencies in Huang and Chen’s testimonies, and lack of forensic evidence that Hsu was involved.

Both the Cheng Hsing-Tse and Hsu Tzu-Chiang cases were major public cases that human rights organizations such as Amnesty International and anti-death penalty groups became involved in. Post-Sunflower Movement civil society, which is largely opposed to the death penalty, also has rallied behind the causes of both. Both cases made their way to the Supreme Court and involved the oversight body of the Control Yuan stepping in to offer criticisms of the way the case was handled, eventually leading to constitutional interpretation that will set precedent for future legal cases. 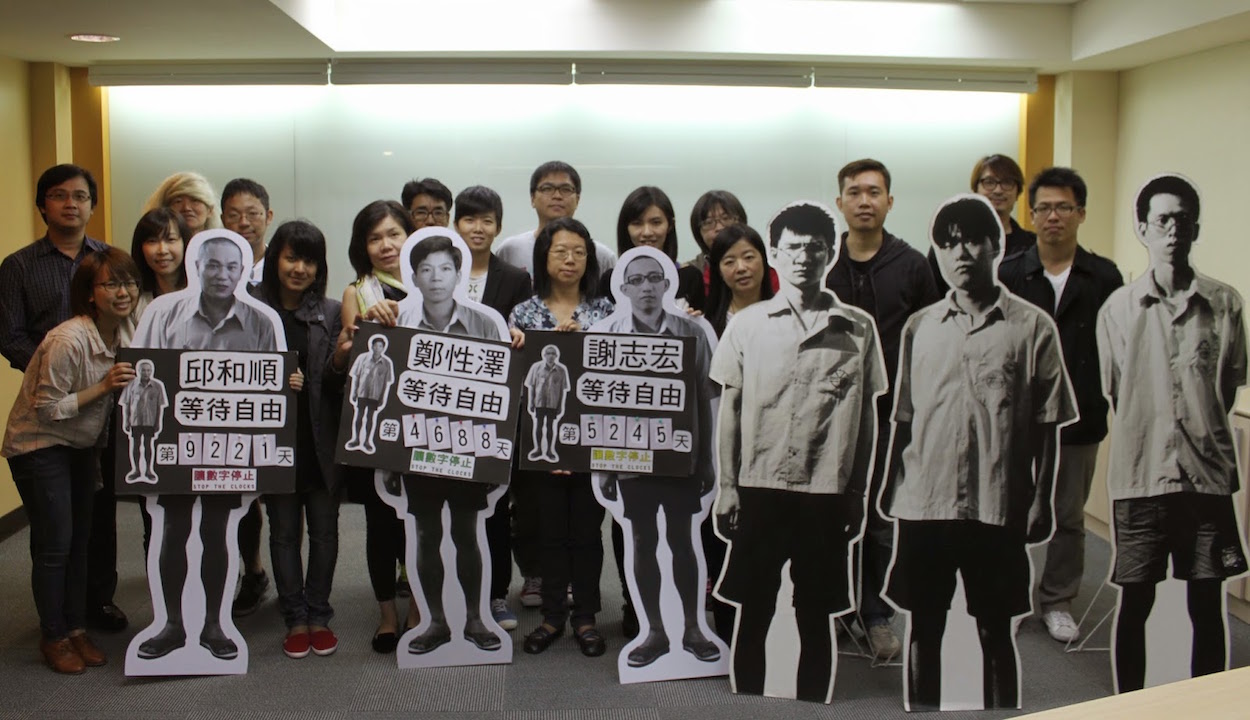 Activists, including Miao Poya of the Social Democratic Party, posing with cardboard cutouts of Cheng and other individuals facing criminal justice cases which activists believe that individuals have been imprisoned on flimsy evidence. Photo credit: About Cheng Hsing-Tse/Website

Nevertheless, with both cases going on for decades, only to find resolution in the past two years, illustrates that that the use of the death penalty is haphazard in the Taiwanese legal system and that the issue of faulty convictions are a larger problem of the Taiwanese legal system. The majority of the public supports capital punishment, as observed in a widely cited 2016 National Chung Cheng University poll that indicated over 83.6% of Taiwanese citizens are against abolition of the death penalty. At times, political administrations have even been accused of using the death penalty to shore up falling ratings, as the accusation was made against the Ma administration and former Minister of Justice Luo Ying-Shay. The speedy execution of individuals such as subway stabber Cheng Chieh in 2016 for murders committed in 2014 generally seems to gesture towards that some executions in Taiwan are politically motivated, as a means to satiate public bloodlust.

It is not surprising, then, to see how in the case of Cheng and Hsu, they may have ended up on death row despite insufficient evidence against them for their charges and how the justice system would fail them in order to placate the public. Due to Taiwan not having a jury-based trial system, sometimes this is because of public pressure on judges who may fear public retribution. At other times, this is because prosecutors prove highly unwilling to drop their cases.

But it also remains that individuals in Taiwan are sometimes arraigned on charges lacking sufficient evidence by police or in which there is the possibility of improper actions by police. While not a case involving capital punishment, this can also be seen, for example, in a high-profile case such as the Zain Dean case in which Scottish national Zain Dean was convicted of killing a man while drunk driving home from a Taipei KTV. Although Dean claimed that he had paid a valet to drive him home and security camera footage shows Dean getting into the passenger seat of a car and a worker from the KTV getting into the driver’s seat, security camera footage from forty cameras in the area which should have shown the crash were either missing or the cameras were out of order. Some suspect that Taipei police may have cooperated with the KTV in order to get the KTV worker off the hook and pin the blame on Dean. 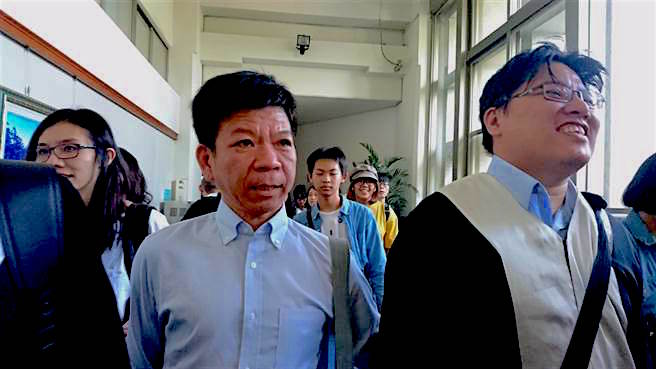 Cheng (center) after his acquittal with his lawyer Handy Chiu (right), a past candidate of the New Power Party. Photo credit: China Times

As an incident which reached national attention, the Zain Dean case, too, may have been one in which public vindictiveness influenced the justice system to rule against Dean despite lack of evidence and highly suspicious circumstances which should at least bear further investigation. The Dean case has yet to be resolved, with a second extradition attempt on Dean after Dean fled the country taking place recently but being rejected by the Extradition Court in Edinburgh. The Dean case, Hsu case, alongside the Cheng case are simply a few examples of where Taiwan’s criminal justice system seems to have come far short.

As such, the Cheng Hsing-Tse case may be a victory in finally securing Cheng’s freedom, but what it ultimately points to is the major reforms which must be made of the Taiwanese legal system. The road to reform for Taiwan’s criminal justice system may still be long.