THE EXHIBITION, Spectrosynthesis: Asian LGBTQ Issues And At Now (光‧合作用 － 亞洲當代藝術同志議題展), at the Museum of Contemporary Art in Taipei, billed as the first major LGBTQ exhibition in Asia, features works by ethnic Han artists from Taiwan, Hong Kong, China, Singapore, and North America. The exhibition was organized by Hong Kong’s Sunpride Foundation, owned by collector Patrick Sun Kai-yit, curated by Taiwanese curator Sean C. S. Hu, and comes on the heels of the historic ruling by the Council of Grand Justices in Taiwan to legalize same-sex marriage in Taiwan. 51 artworks by 22 artists are featured in the exhibition.

Much as how the ruling on same-sex marriage in Taiwan has been cited as a landmark for Asia, with Taiwan achieving the status of the first Asian country to legalize same-sex marriage, despite the fact that LGBTQ-themed exhibitions have taken place in Taiwan and other locations before, Spectrosynthesis is claimed to be the first exhibition of LGBTQ art featuring the range of international artists that it does. However, the exhibition’s curators deemed it overly broad to try and feature artists from all of Asia, and so the exhibition confines itself to Sinophone countries and territories. Such are the inherent limits of the political and juridical category of “Asia,” perhaps. 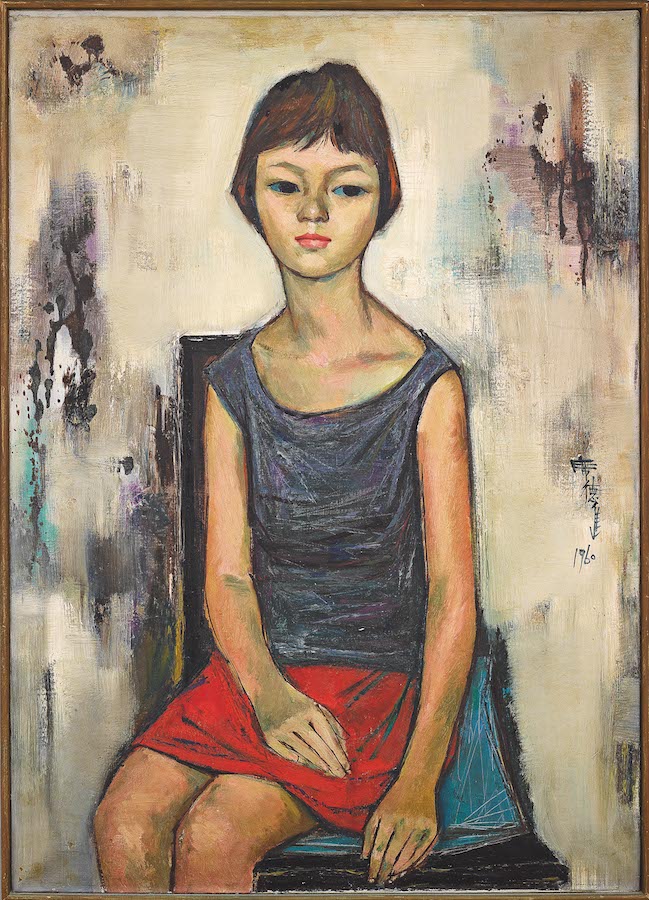 Either way, it remains a sensitive political issue for artists open to be about their sexual identities in many of the countries represented in the exhibition, particularly given recent crackdowns on LGBTQ rights activists in China and Singapore. The pseudonymous Chinese artist Xi Ya Die, originally a farmer, is one such individual represented in the exhibition.This may have been another reason why the exhibition was held in relatively free and open Taiwan, although the exhibition’s organizers have stated that they hope for the exhibition to travel to other countries in the future. Indeed, in consideration of present political and social circumstances in East Asia, one is generally not hopeful for other East Asian countries or even Sinophone countries and territories to follow in Taiwan’s footsteps.

As such, the exhibition concerns itself with the history of the LGBTQ movement in Asia through featuring works by late Taiwanese artist Shiy De-jinn, who died in 1981, and was thought to be gay despite not being out. For this reason, the exhibition also displays issues of LGBTQ arts magazines such as poser and hotam. Given the political and social underpinnings of the exhibition, it is also not too surprising that some featured works are highly documentary in nature, as seen in Wen Hsin’s Half series, a photo series of transgender women, or the use of photos of Taiwanese LGBTQ activists in the photos of Tzeng Yi-Hsin. Hou Chin-Ming’s conceptually brilliant “Man Hole” consists of portraits of gay men drawn by the artist juxtaposed with self-portraits of the same individuals and text written by them, allowing for a dialogue between artist and subject in this way. 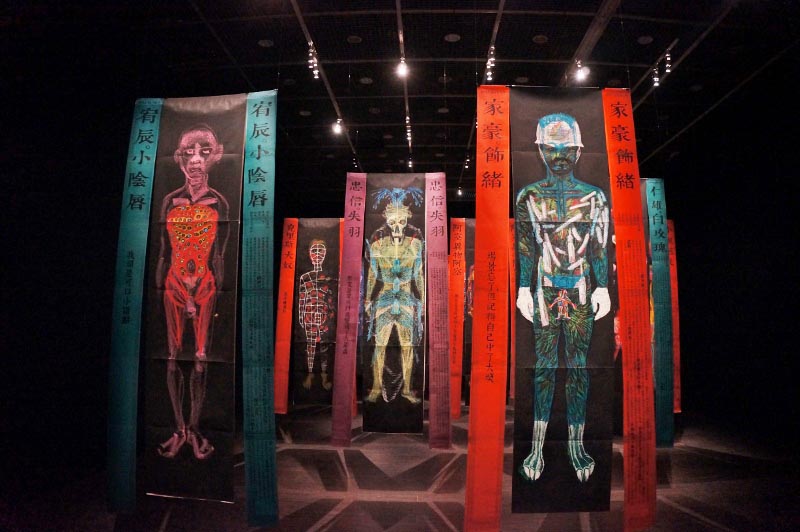 Several works featured in the exhibition represent LGBTQ issues through the medium of abstraction. We see this in Chen Chien-Pei’s “Interface,” a video art installation of two hands feeling each other out in a manner probably meant to connote human interaction writ large, or the scenes of a pensive male body in Yam Xing’s video art installation, “The History of Fugue.” Samson Young’s “Muted Situations #5: Muted Chorus,” showcasing the violence of a male and female choir singing in a muted manner, is more direct in what is attempts to get across in its suggestion of repression, but also effective. Su Hui’s Yu video art piece “Nue Quan” is evocative another abstract work, showing a man stuffing another man into a suitcase and a man sitting on his bed with a plastic bag over his head, while the sound of waves plays in the background.

Other works evoke the surreal. The standout piece would be Jun-Jiehg Wang’s “Passion,” a video art piece consisting of three screens set up above a pool of water, showing scenes of highly metaphoric violence between two sailors and an astronaut, in the backdrop of a large phallic structure with a door and elevator in it. The piece probably lends itself too easily to interpretation, given that this metaphoric violence likely stands for the violence of sexual desire, but the ambition of the piece is admirable. On the other hand, Wang Haiyang’s animated work, “Wall Dust” is another ambitious work, toying with the notion of man’s animal nature as the source of sexual desire and sexual desire as the driver of transformation in man, and with visual citations that range from 19th century European zoology to Yugoslavian futurist structures built during the Tito period, and, overall, having a highly playful quality to it. 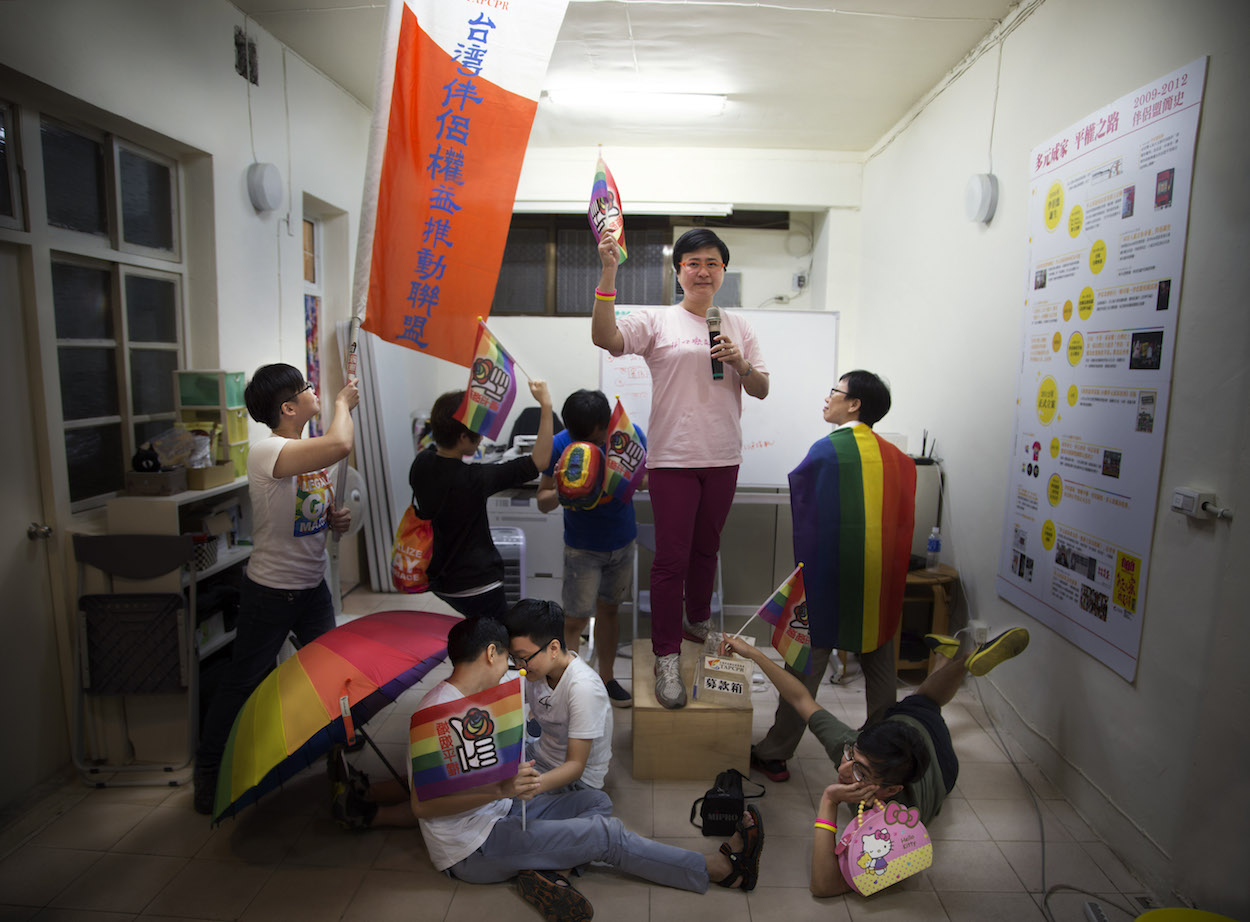 Pastiche proves a recurrent theme running through works in the exhibition. The photos of Tzeng Yi-Hsin are notably pastiches of seminal western paintings as Edouard Manet’s Olympia and Eugène Delacroix’s Liberty Leading The People, but instead featuring Taiwanese LGBTQ individuals. Very likely the idea is to “rewrite” heterosexual, Eurocentric history through these recasting of seminal paintings in the western canon. Likewise, Singaporean artist Ming Wang’s “Life and Death in Venice,” is obviously adapted from Thomas Mann’s “Death in Venice,” except transposed to have an Asian protagonist. Through this, one also observes the concern that the exhibition has with cultural identity, that is to say, LGBTQ issues in specifically non-western contexts, as we see also in Tao Hui’s “Talk about body,” which concerns itself with mixed ethnic descent and Wu Tsang’s “Duilian”, which draws on female Chinese revolutionary Qiu Jin’s life history as a form of unearthing buried queer histories.

Nevertheless, in all, while the exhibition contains many worthy works and clearly is a historic one, one is struck by a sense of incompleteness at the end of the exhibition. Obviously, even if historic, no single exhibition could hope to representative of LGBTQ artistic production in Asia, or narrower frames such as East Asia, Sinophone countries and territories, or even just Taiwanese LGBTQ art. And in consideration of the limited space available in the Museum of Contemporary Art, one comes out of the exhibition with the sense that the exhibition is still quite small. Perhaps, then, given the long walk which remains to be walked for LGBTQ rights in Asia, what this present exhibition points to a more representative exhibition of LGBTQ art in Asia which may come to be sometime in the future. Yet these will ultimately depend on political solutions. And so if the aim of the exhibition, in some sense, was to motivate individuals to political action, ultimately this is successful, with the exhibition pointing to what lies beyond itself.