DESPITE THE unexpected results from the referendum last Saturday, pro-marriage equality groups have not backed down. Undeterred, Equal Rights Cuties (平權公投小可愛), Marriage Equality Coalition Taiwan (婚姻平權大平台), led by political activist Jennifer Lu (呂欣潔), and the Taiwan Alliance to Promote Civil Partnership Rights (TAPCPR, or 台灣伴侶權益推動聯盟) have continued to step up efforts to vocally and actively advocate with the public, mass media, and legislators at all levels. 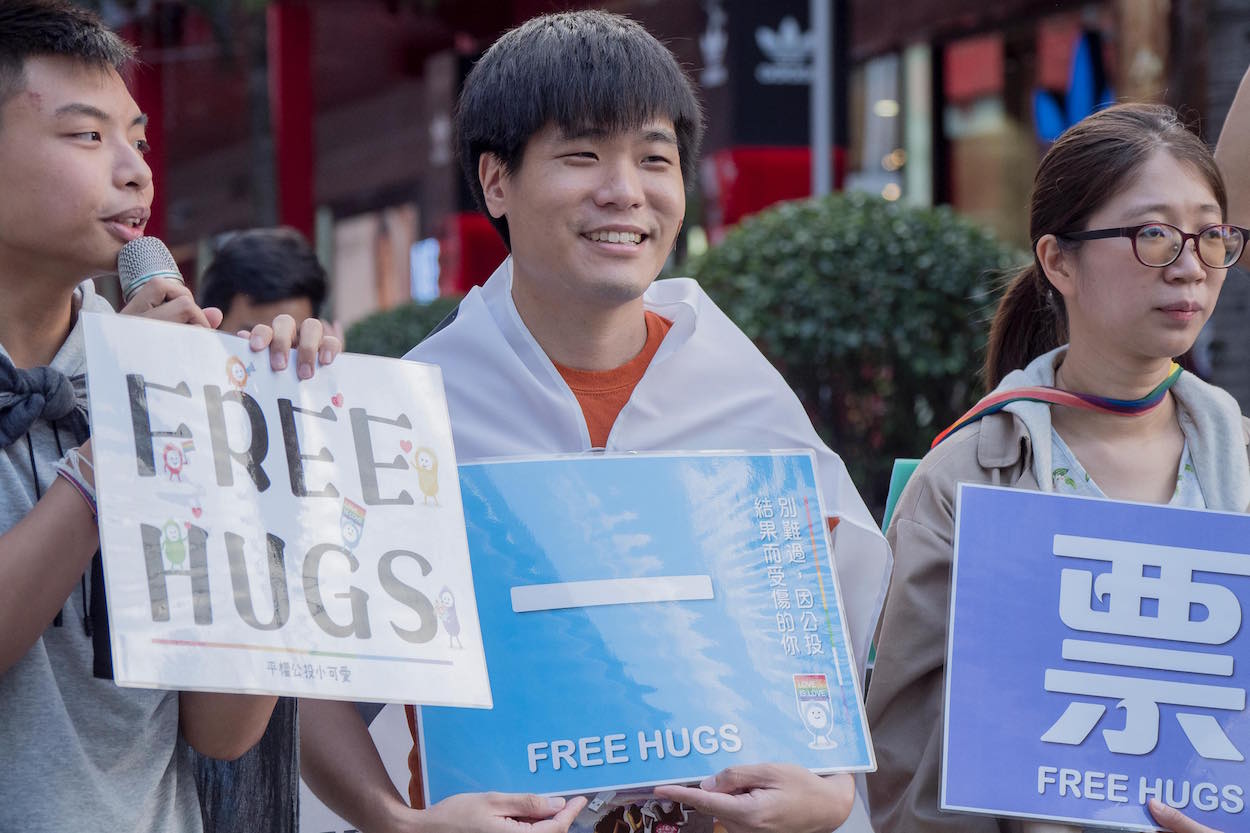 With a small one-day KTV break on the Sunday after the 9-in-1 elections and referendum, Equal Rights Cuties and Equality Coalition Taiwan resumed daily canvassing activities at major public locations throughout Taiwan. As it is a tradition for triumphant campaigns by Taiwanese politicians hold thank you rallies (謝票會), both volunteer advocacies have been holding evening and all-day weekend thank you rallies to show appreciation for the over 3 million votes supporting marriage equality and LGBT+ inclusive education. To many, this is a milestone, as the movement started 32 years ago with one person, Chi Chia-Wei (祁家威), the very first advocate of same-sex marriage, as it was called then, who filed a lawsuit in 1986 when the KMT (中國國民黨) lifted martial law (戒嚴) in Taiwan. Chi was detained, harassed, and denied basic human rights to marry his beloved partner.

The reaction on the streets has been mostly positive, healing the scars in hearts of the all-volunteer groups. Surprisingly, different age groups have come out in support. To my own surprise, many middle-aged men and women, the demographic who comprise most of the anti-equality votes approached us for hugs with words of encouragement along the lines of “Thanks for your bravery, you will definitely get there!” (謝謝你／妳們的勇敢，你／妳們一定做得到，加油！). 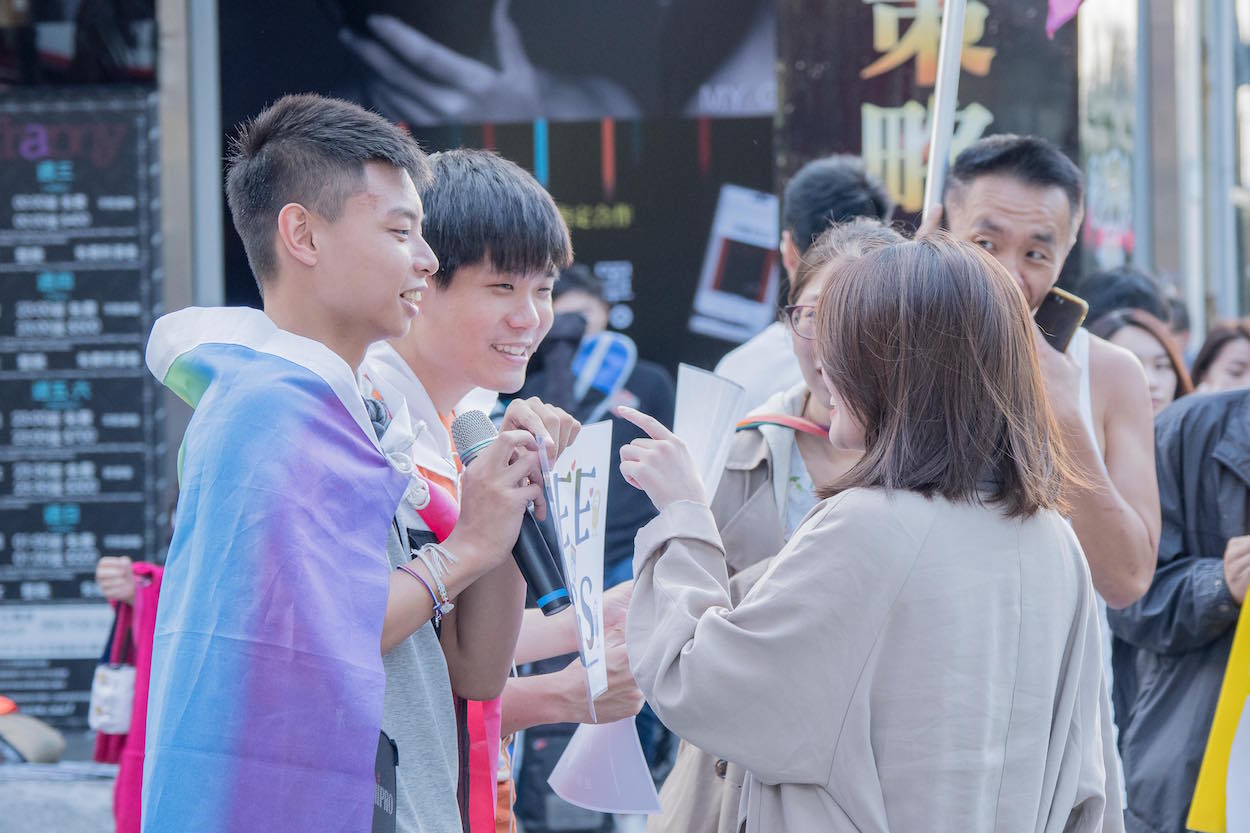 Without a doubt, there were also many in the LGBT+ community in need of encouragement, with even just a hug going a long way, showing that there is still support and strength out there to carry on. The results have had a profound impact, with a reported 9 suicides since the referendum results were released, leaving many uncertain of what is to come from the large 2-1 proportion of votes against equality.

Personally, it has been a daunting week, a roller coaster of emotions, repeating cycles of waking up to tears only to recoup again from online support of friends and liberal media. There has also been much encouragement from fellow volunteers, especially the renowned 16-year old activist, Vincent Li, also known as Guan Guan (冠冠), who has been remarkable, with his emotionally strong and encouraging actions in helping others to stay focused in promoting dialogue and positive messages of love, hope, and equality. 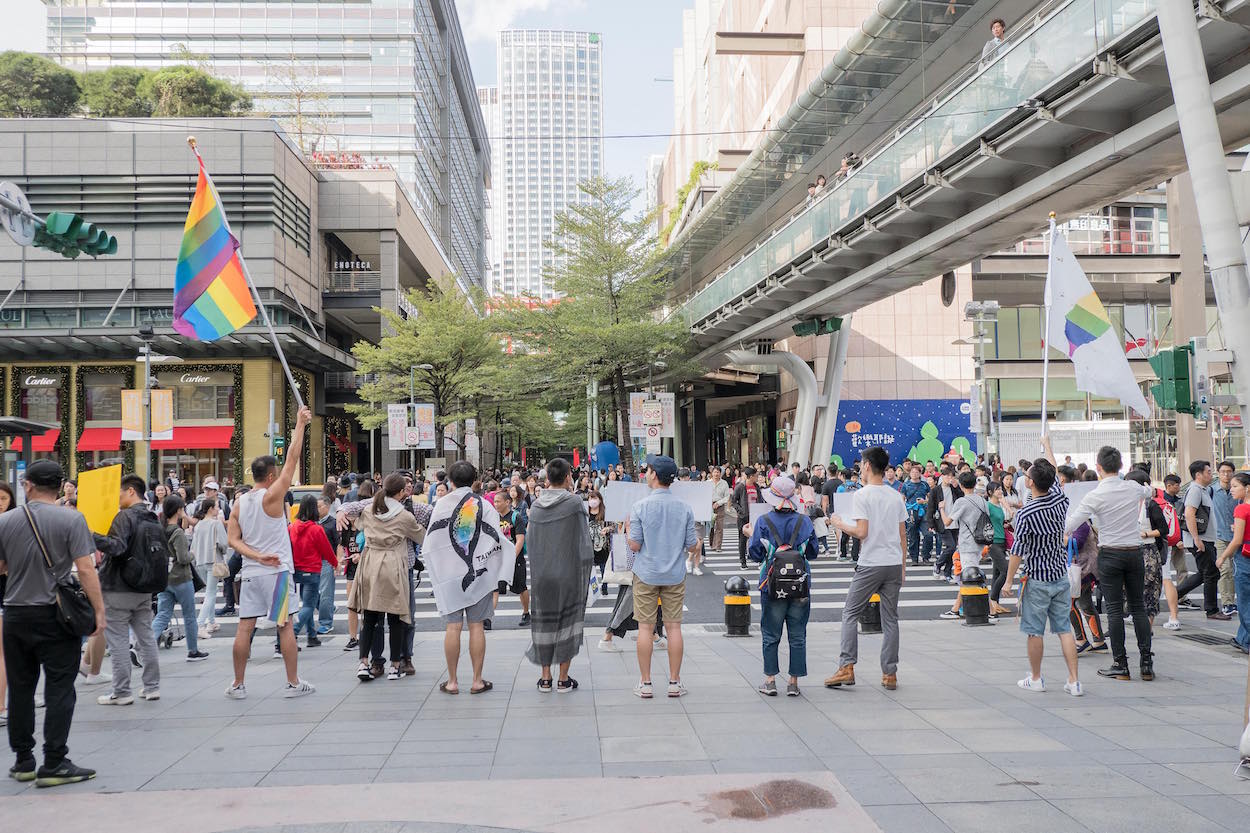 TAPCPR, led by attorney and law professor, Victoria Hsu (許秀雯), who represented Chi from his earliest court days, have also been mobilizing post-referendum alongside other legal groups for fundraising and strategizing events with pro-LGBT+ politicians to keep up visible pressure on legislators and the judiciary to ensure whatever form of legislation is enacted does not fall short of equality under existing marriage laws, despite enacting a special law (立專法) rather than amending the marriage clause in the amending the Civil Code (修民法).

Despite the anti-equality groups’ opposition, the Judicial Yuan (司法院) has come out both pre-referendum and post-referendum to reiterate that the Constitutional Court’s 2017 ruling on same-sex marriage, Interpretation No. 748, supersedes any legally binding referendum, thus effectively invalidating anti-marriage equality results. What remains to be seen is how much influence the anti-equality groups can exert, through their renewed momentum gained by citing popular support against LGBT+ equality. 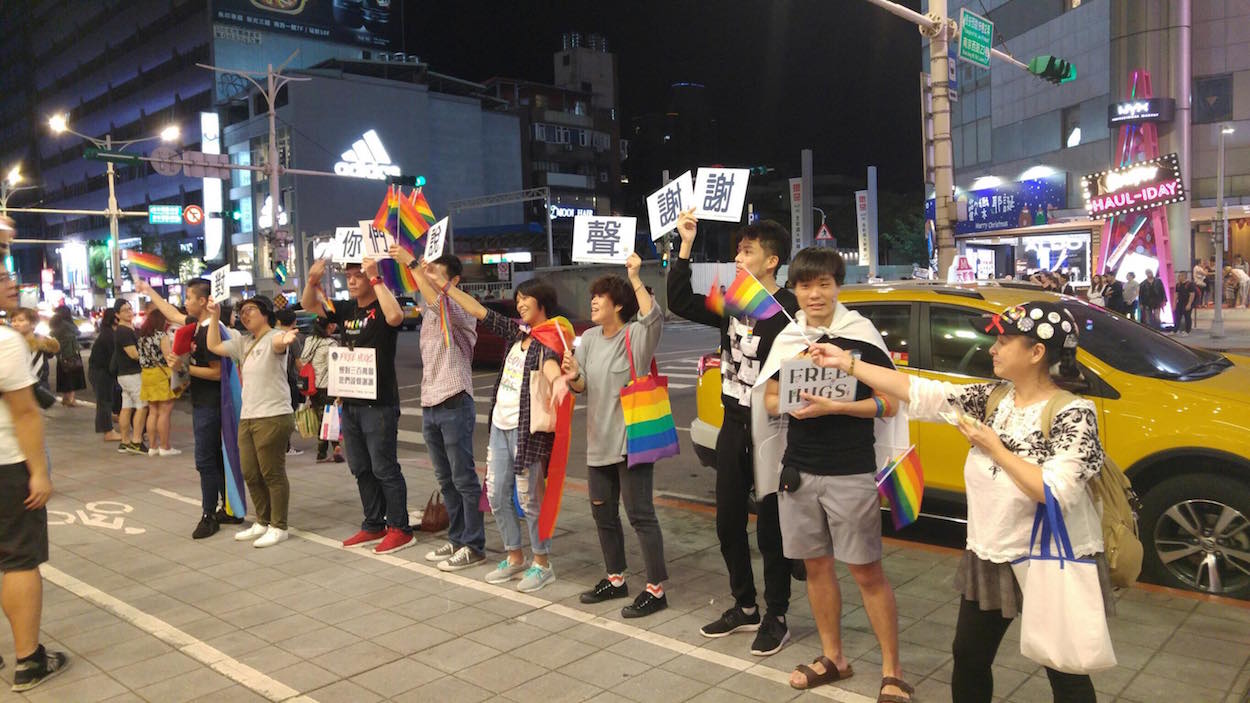 Taking aside all the smear and misinformation spread by ultra-funded radical Christian groups, mainly the Coalition for the Happiness of our Next Generation (下一代幸福聯盟), their negativity has brought the national limelight to LGBT+ social issues. The more people are given the full story, the more hearts and minds changed through realizing that this topic is about love and humanity, the result is more support for equality.

With the help of mass media and recorded televised debates on the matter, a substantial number of ordinary citizens who have never heard of marriage equality, have turned to support equality out of disgust from ridiculous and outlandish arguments against the LGBT+ minority. Televised arguments from the anti-campaign range cite disapproving sexual activity between same-sex couples, citing larger bacteria levels involved when compared to heterosexual couples–claims debunked by physicians almost instantaneously. 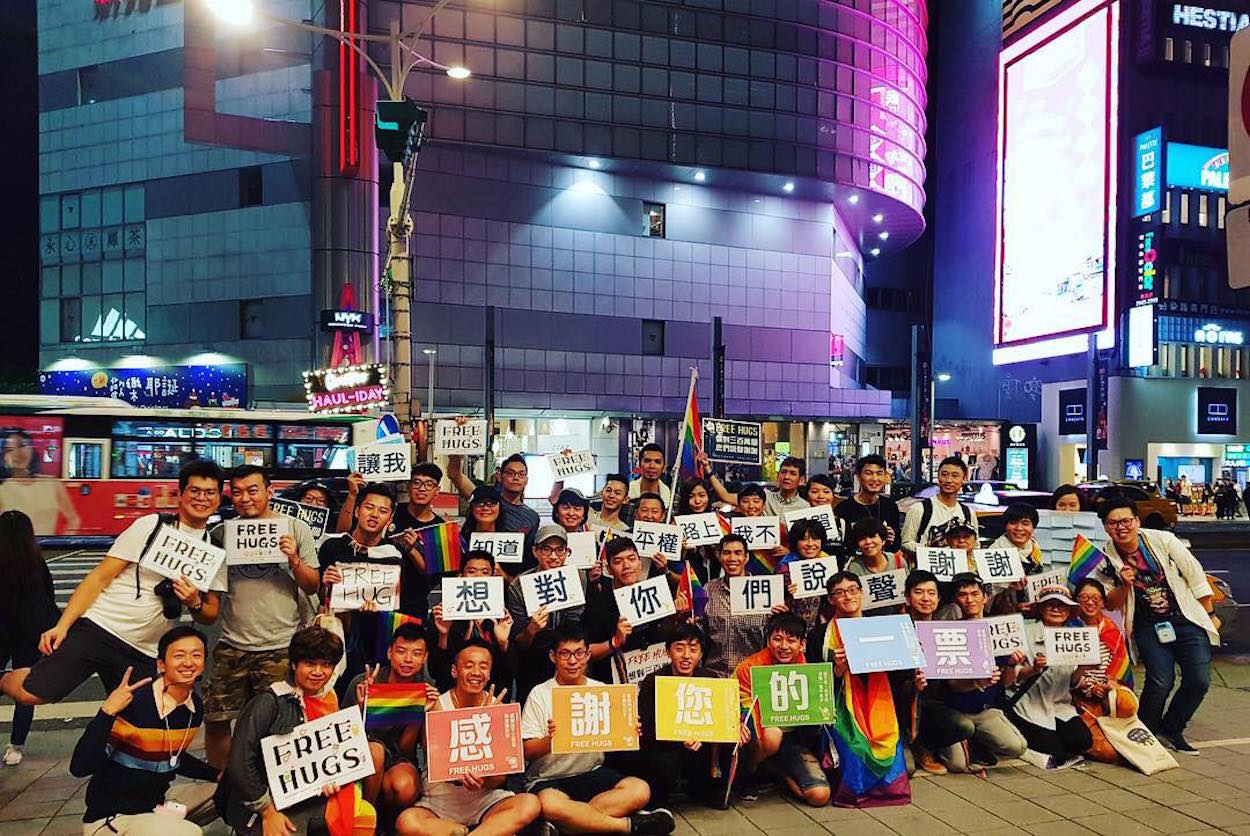 Nevertheless, one lie has been relatively successful in deceiving mothers, a large voting bloc, that sexual orientation and gender identity is formed through nurture and could be influenced by school curriculums. This returns to the lack of awareness in older generations on sexual identity and LGBT+ issues, with uninformed mothers easily swayed by fake news. Many fall for other lies, such as that teaching minors in sexual education classes will lead them to engage in earlier sexual conduct, all of which is misleading and has been debunked by Taiwan’s Ministry of Education. Despite their well-funded campaign machine–largely funded by conservative churches in the US, China, and the millionaire founder of HTC, Cher Wang, increased dialogue has had a positive effect on support for LGBT+ equality, as witnessed through overwhelming support among those younger than 40.

The actual critical work begins now, as the clock ticks less than six months to the deadline set by the Constitutional Court in May 2019. LGBT+ advocacies will be ramping up efforts to change hearts and minds on the streets beyond their echo chambers (非同溫層), to lobby legislators, and to actively work with the media to get the message of love, understanding, and equality to the public on the long road to achieve full equality under the law and to normalize social perception of LGBT+ individuals. 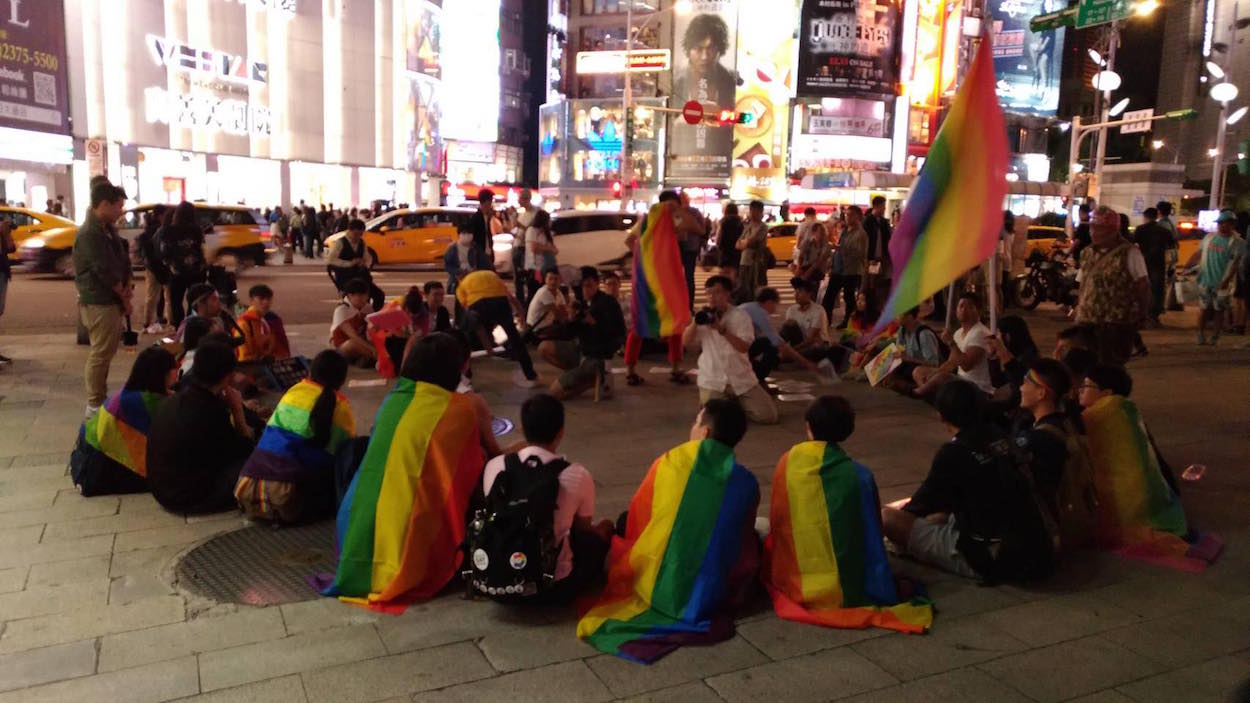 As to what legal form of marriage equality we will see before the summer of 2019, that will in large part depend on how hard the equality groups can mobilize, and how the DPP handles marriage equality legislation. If the DPP does what they frequently do – -carry out little action—and decides to distance itself from this topic altogether until the Constitutional Court’s deadline, the Civil Code will be amended to allow same sex couples to marry by default, which may be a blessing in disguise. In any case, with the anti-equality forces also continuing to mobilize, silence from marriage equality advocates is not an option.

Underfunded and massively outnumbered, marriage equality advocacies are in dire need of funding. For those with the financial ability, TAPCPR donations are welcome here, and for US residents here.