GROUPS RALLIED today in front of the legislature to call attention to the Chinese government’s authoritarianism and to call on the Taiwanese government to take stronger action for Hongkongers in need of assistance. The rally took place today because October 1st is Chinese National Day. 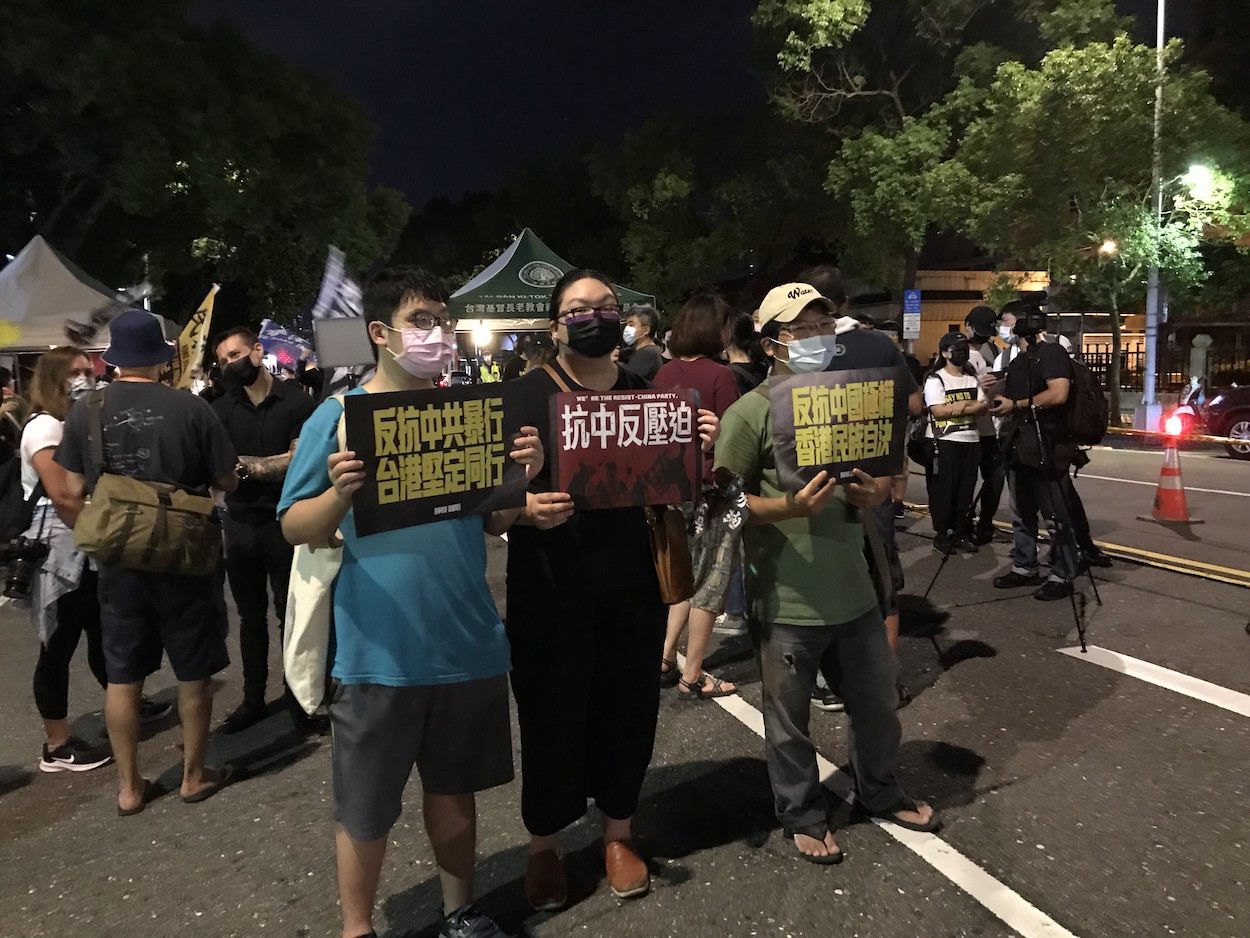 The rally began at 7 PM, with a stage set up in front of the Legislative Yuan’s Qunxian Building, as well as a number of tents. Temperature checks and registration took place for members of the public to enter the area where the rally was taking place, with a crowd limit of 300 enforced. Under current COVID-19 regulations set by the government, only outdoor events of under 300 participants are allowed. Similarly, there were some concerns about security expressed by organizers, in light of attacks on Hongkongers that have taken place in Taiwan, such as paint being thrown at singer Denise Ho during a visit to Taiwan or the Aegis restaurant set up to help Hongkongers having chicken feces thrown at staff. The event was also live streamed for those unable to make it in person.

Among the groups that jointly organized the rally were the Hong Kong Outlanders and Taiwan Hong Kong Association, groups resisting Hongkongers in Taiwan. The Economic Democracy Union, Taiwan Association for Human Rights, Covenants Watch, Human Rights Network for Tibet and Taiwan, Students for a Free Tibet, Taiwan Labor Front, Taiwan Forever Association, and Taiwan New Constitution Foundation were among the other participants. These groups include mainstays of Taiwanese civil society, as well as groups representing Tibetans in Taiwan. 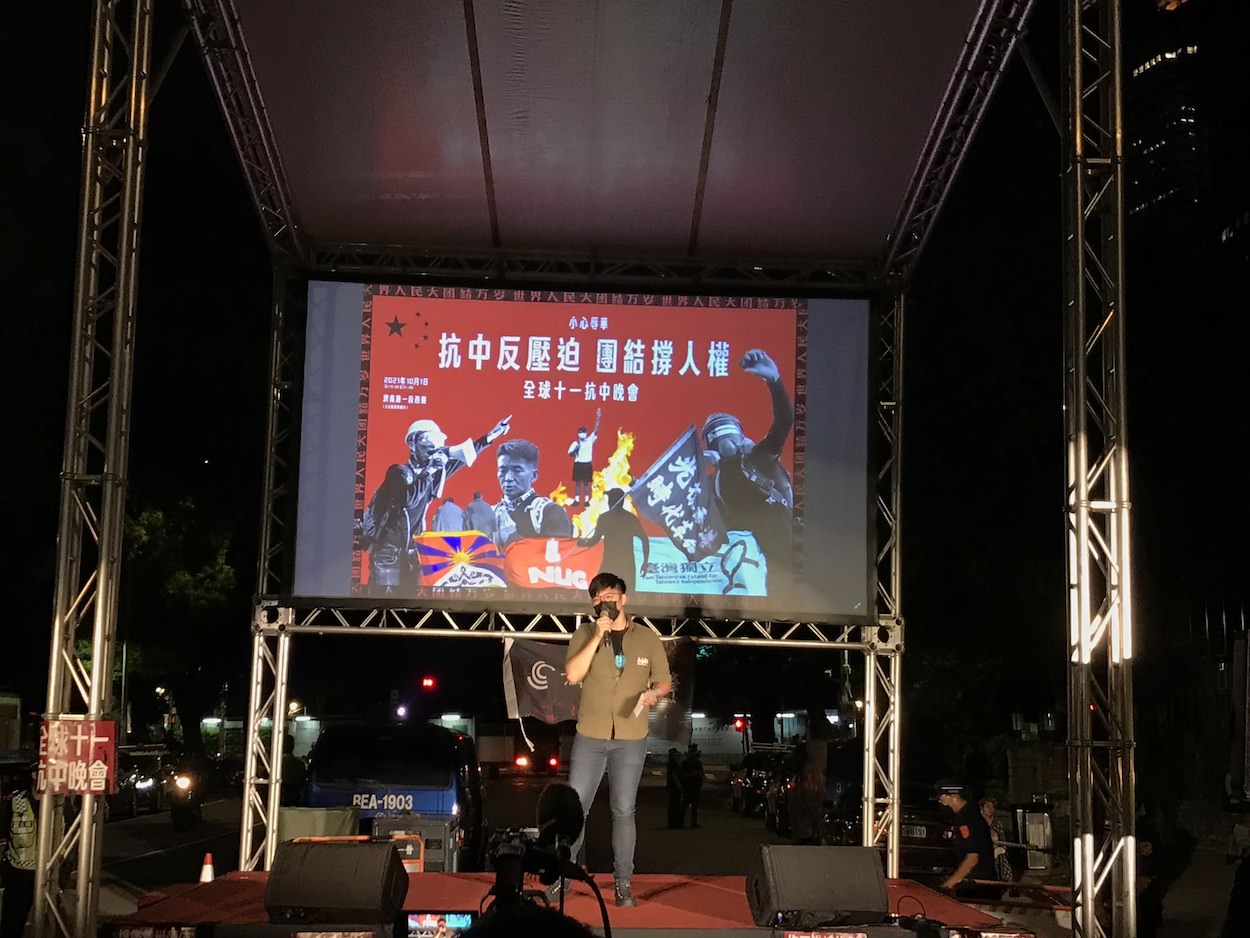 Around 200 were in attendance, with more participants arriving around half an hour after the rally began. Though as part of COVID-19 regulations, participants were also asked avoid coming in “full gear”—referring to full protest gear, as used in Hong Kong protests to defend against tear gas—a group of participants arrived wearing black clothing, masks including V for Vendetta masks, and carrying Hong Kong independence banners.

Speakers from Taiwanese human rights organizations called on the Taiwanese government to provide more concrete measures to assist Hongkongers, seeing as while the Taiwanese government vets Hong Kong protests that apply for asylum, this is in many respects not enough. More long-term measures to assist Hongkongers are still lacking, such as with regards to the fact that Hongkongers have difficulty renting apartments or applying for cell phone contracts without residence IDs, and it remains opaque as to the paths for Hongkongers to obtain residence in Taiwan. 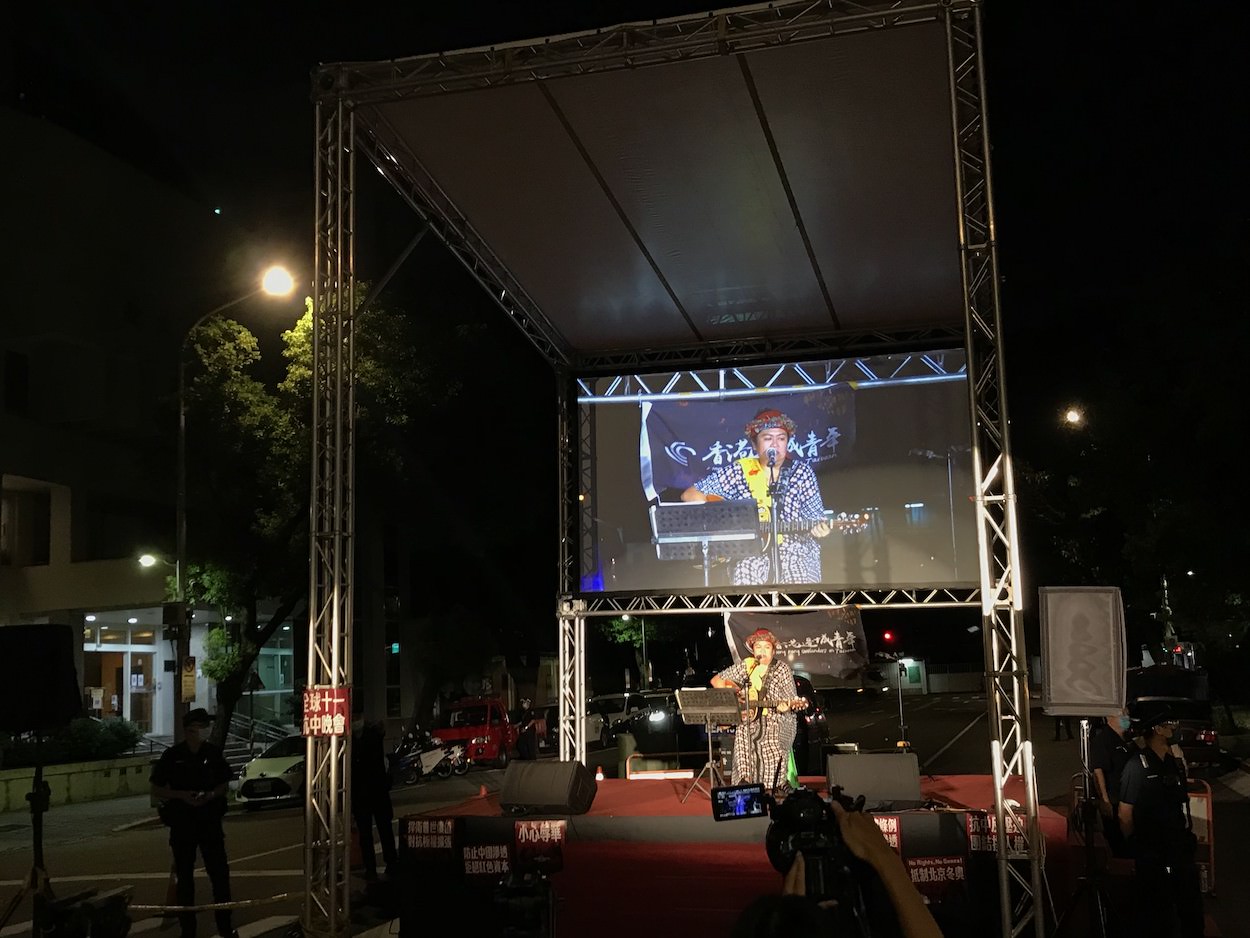 Otherwise, speakers pointed to China’s efforts to infringe upon media freedoms in Taiwan through “United Front” tactics, the dissemination of disinformation and misinformation through online platforms, and by financially influencing Taiwanese media outlets. One of the protest demands was also that the 2022 Beijing Olympics not take place, given China’s human rights violations against Tibet, Xinjiang, Hong Kong, and other places.

Tibetan activist Tashi Tsering, who lives in Taiwan, carried a Tibetan flag during the rally. In a speech, Tsering touched on his experience of exile as a second-generation Tibetan born in India, and drew comparison to the situation facing Hongkongers. Similarly, Tsering spoke of attempts by the Chinese government to extinguish Tibetan culture and religion. 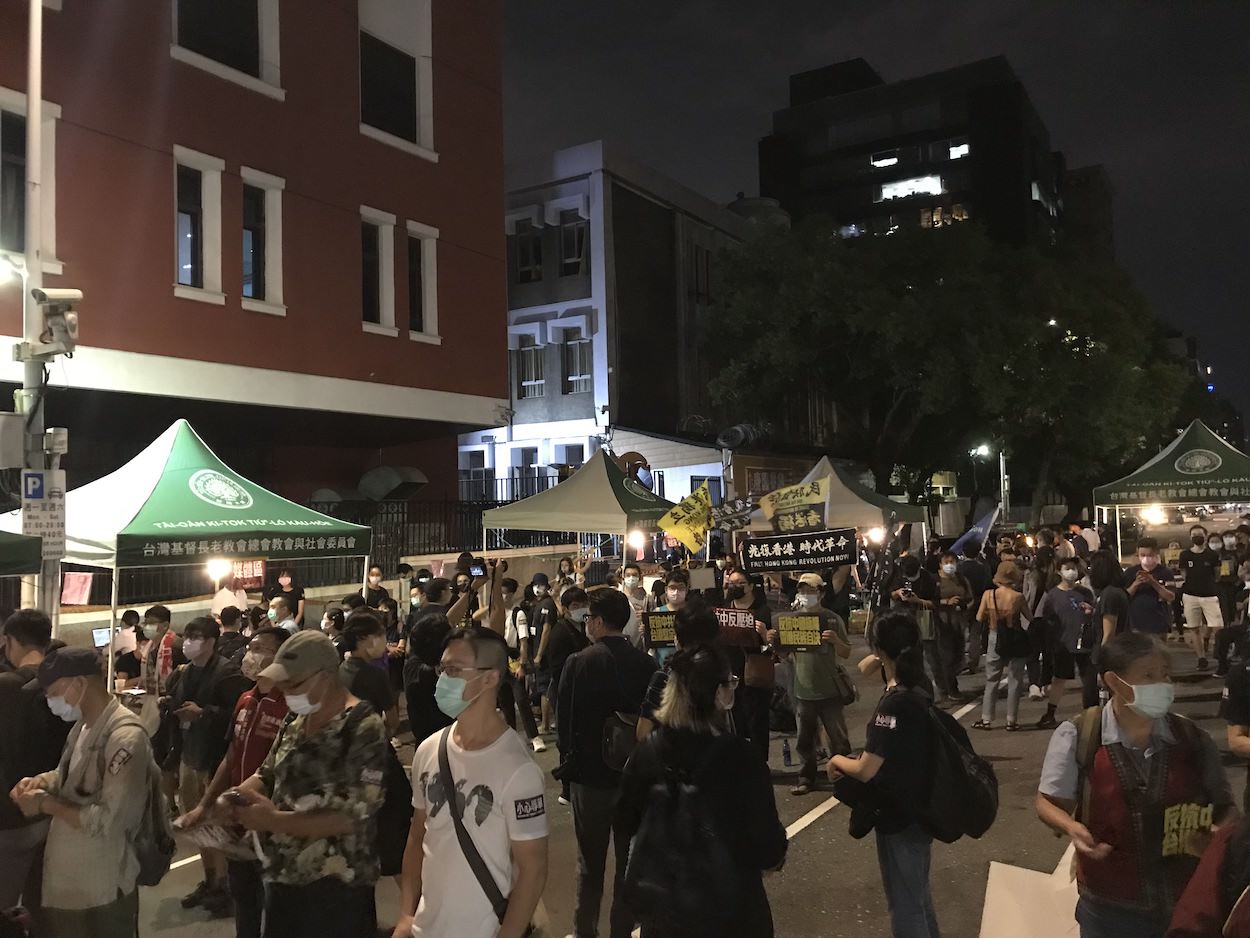 Burmese activist Koko Thu, who currently resides in Taiwan, and was a participant in the Burmese democracy movement in 1988 was another speaker. In comments, he discussed the shared struggle for democracy internationally, giving the event something of a Milk Tea Alliance framing.

Indigenous singer-songwriter Panai also performed, singing a song that was written by her then-sixteen-year-old daughter in 2016 or 2017. Panai commented that many of the issues brought up by speakers returned to the nation-state and that, while Taiwan may view itself as a progressive nation, issues such as those faced by Indigenous regarding sovereignty issues that it is not necessarily so. Panai also sang “Glory to Hong Kong,” one of the best-known songs to emerge from the 2019 Hong Kong protests and sometimes referred to as the “national anthem” of a future Hong Kong, in Cantonese. 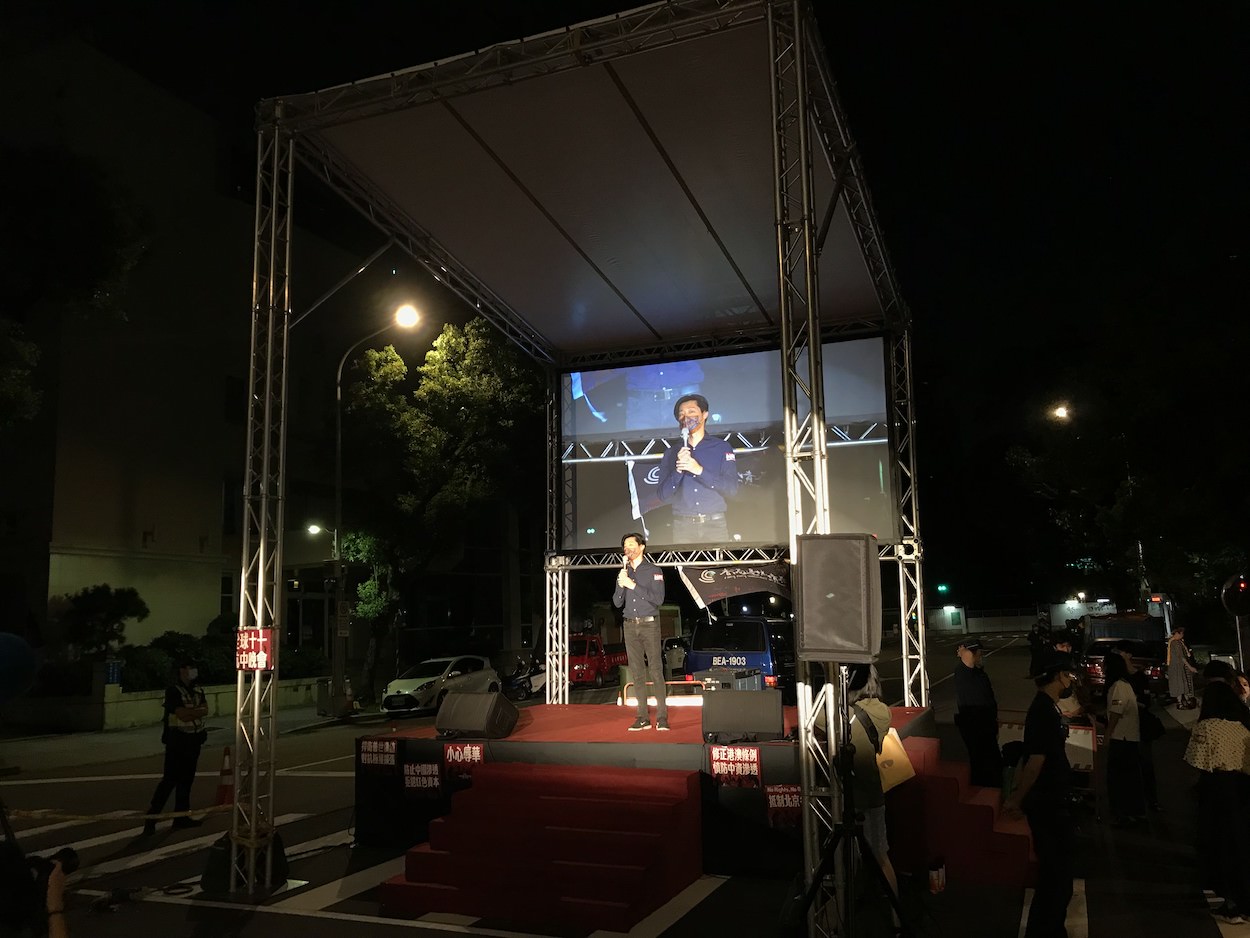 A number of politicians, too, were present. This included the cohort of Taipei city councilors that won office in 2018 with backgrounds in post-Sunflower Movement activism, Lin Ying-meng, Meredith Huang, Sabrina Lim, and Miao Poya, who brought up recent events such as the removal of the ROC flag from the AIDA World Championship because of complaints from China, and criticized newly elected KMT chair Eric Chu for a letter to Chinese president Xi Jinping after his election victory in which he promised to maintain the 1992 Consensus. Liao Yu-hsien of the NPP was also present, speaking in Taiwanese Hokkien.

Legislators that spoke at the event included Chen Jiau-hua of the NPP, independent Freddy Lim, and Hung Sun-han of the DPP. Taiwan Statebuilding Party chair Shinichi Chen spoke by video, with much of the party in Taichung to prepare for the recall vote against its legislator Chen Po-wei. Lim was particularly emphatic in calling for support for Hongkongers, stating that this would make Taiwan stronger, and that Taiwan should seek to assist others much as how it had itself been assisted. 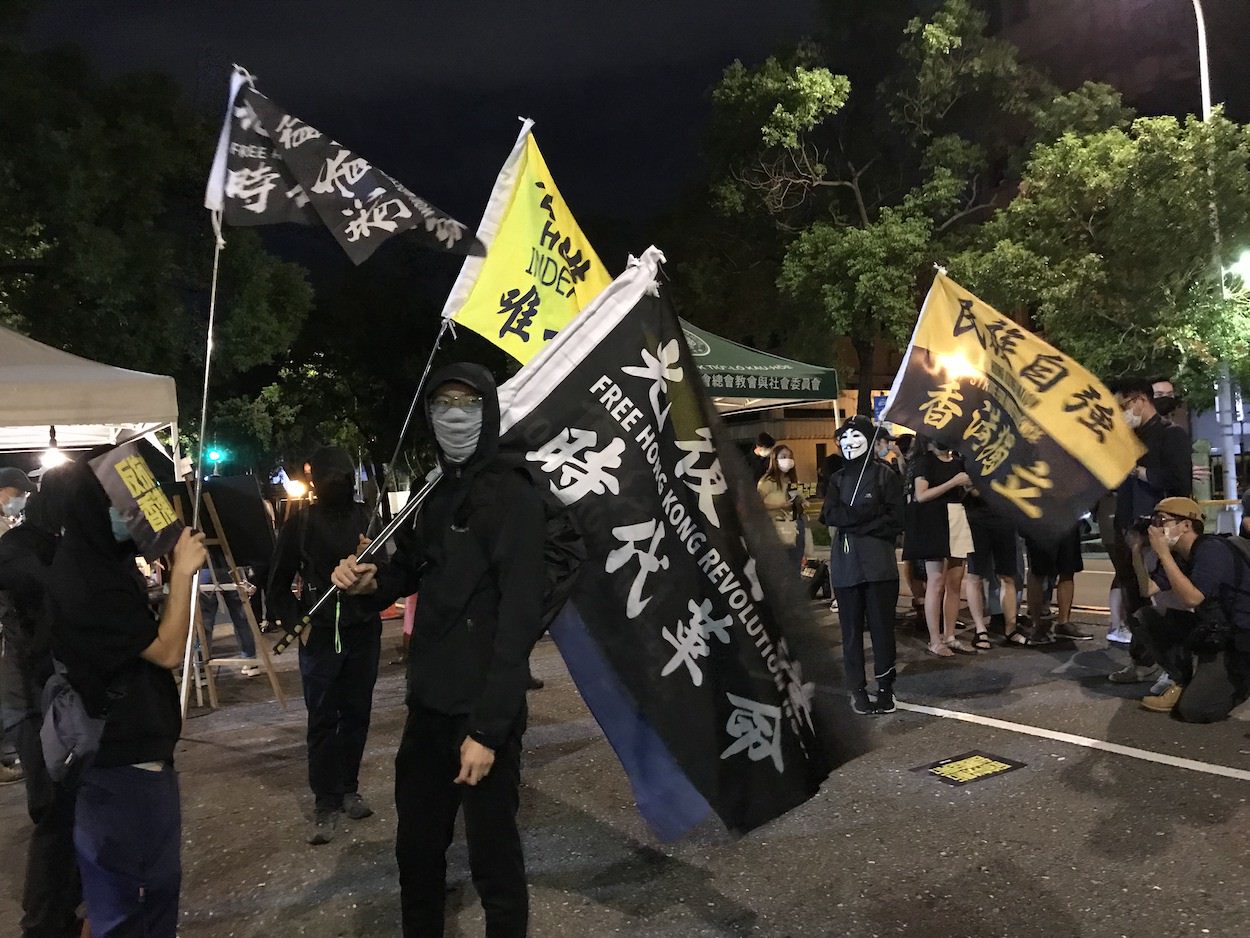 The event closed with a speech by academic Wu Rwei-ren. Wu called on the crowd to understand history of Chinese oppression of “ethnic minorities” and its attempts to carry out settler colonialism. To this extent, Wu discussed the larger history of actions by the Chinese Communist Party since the establishment of the PRC, and criticized the social divide between urban and rural residents it maintains. As such, Wu directly addressed leftists the world that idealize China, commenting that China was the real “revolution betrayed.”