THE TRANSITIONAL JUSTICE Commission (TJC) announced aspects of its proposal for renovating the Chiang Kai-shek Memorial yesterday. This will include removing the 6.3-meter bronze statue of Chiang Kai-shek at the center of the memorial, which is overseen by an honor guard. At the same time, it is a question as to whether the TJC has sufficient political leverage in order to remove the statue, with the KMT likely to push back on the issue. The full plans will be publicized in March and April next year, when an exhibition will be held to display these plans, which will then be submitted to the Executive Yuan in May 2022.

Calls to renovate the Chiang Kai-shek Memorial have been underway for several years now. Apart from containing a statue of Chiang, the Chiang Kai-shek Memorial also features a museum of Chiang memorabilia and historical artifacts, including cars formerly driven by Chiang, clothing and personal belongings, favorite books, and even replicas of Chiang’s favorite foods. The memorial is often a site for Chinese tourists, with tourist fare regarding Chiang’s personality cult among what is sold in souvenir shops.

Chiang Kai-shek statues are found across Taiwan, featuring prominently on school campuses. There have been numerous campaigns calling for the removal of these statues in past years, which are also regularly defaced by students around the February 28th anniversary of the 228 Massacre. Taiwanese independence activists have, at other times, decapitated or defaced statues. In prior years, exhibitions have also been held in the Chiang Kai-shek Memorial to think of creative possibilities for what could eventually be done with the space, with artists invited to propose ideas.

It is not surprising that the TJC would take moves to target the Chiang Kai-shek statue in the Chiang Kai-shek Memorial, seeing as it is the largest and most prominent Chiang statue in all of Taiwan. Although one routinely sees misleading international reporting claiming that a number of Chiang statues were relocated to Cihu in Taoyuan, near the two mausoleums holding the remains of Chiang Kai-shek and Chiang Ching-kuo, to remove them as symbols of authoritarianism, this is incorrect. It is more accurate to say that the Chiang statues were relocated to Cihu as part of moves to protect them, as seen in that the museum near the statue park is similarly devoted to Chiang’s personality cult, and in light of Taoyuan’s historically pan-Blue political base. The move took place when Eric Chu was magistrate of Taoyuan.

In particular, the TJC’s proposal drew attention to the fact that the Chiang Kai-shek Memorial is built as though it were a temple for Chiang. The proposal calls for the removal of the statue and other symbols of authoritarianism in the memorial, including the museum exhibition devoted to Chiang attached to the memorial, and structurally renovating the memorial so that it is no longer a temple to Chiang.

Concrete proposals as to what is to be done with the memorial have not been announced. In past years, suggestions have included the Chiang Kai-shek Memorial into a museum on the authoritarian period, or that the legislature could be moved to the premises, seeing as the current Legislative Yuan is located in a series of buildings in the Shandao Temple area, the main building of which was formerly used for the Taihoku Prefectural Second Girls’ High School during the Japanese colonial period. The National Theater and Concert Hall will stay on the premises.

The KMT is expected to try and resist efforts to renovate the Chiang Kai-shek Memorial, seeing attempts to rid Taiwan of symbols of the party-state as an attack on ROC history. The KMT does not always openly praise Chiang Kai-shek, oftentimes preferring to praise Chiang Ching-kuo as the father of Taiwan’s democracy, and claiming that it is a party which is staunch in the defense of Taiwan’s democracy. More broadly, the KMT insists that without its governance, Taiwan would not exist today, even as it currently works to facilitate the political unification of Taiwan and China. 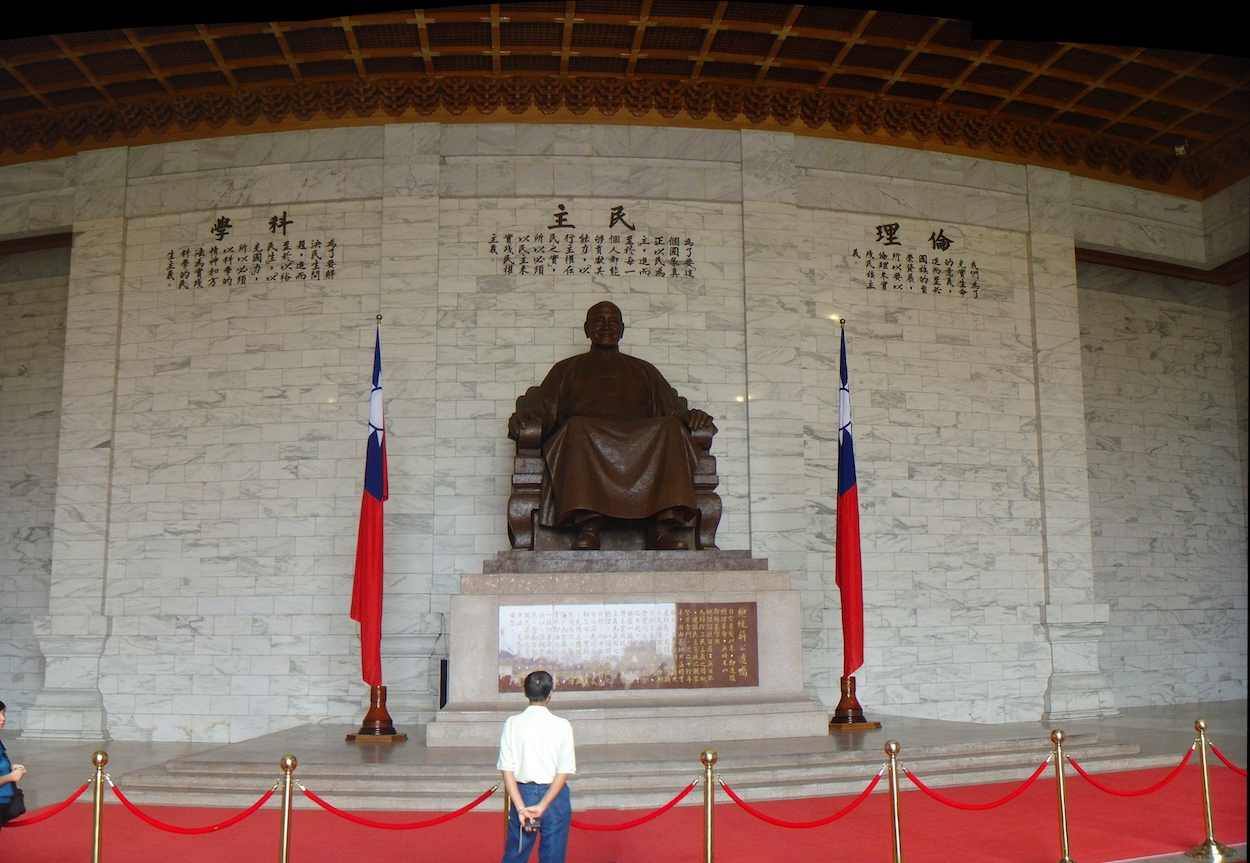 Indeed, despite being the former authoritarian party in Taiwan—which ruled over Taiwan in what was then the longest martial law period in world history—the KMT currently accuses the Tsai administration of having become a dictatorship. Likewise, the KMT claims that it is conducting a “Green Terror” worse than its “White Terror” through targeting symbols of the ROC, never mind that the KMT killed tens of thousands during the White Terror. In reacting against the plans to renovate the Chiang Kai-shek Memorial, KMT party chair Johnny Chiang claimed that Tsai was an “authoritarian leader over a one-party state”.

Nevertheless, one notes that the Chen Shui-bian administration also sought to change the names of institutions and to remove Chiang Kai-shek statues, and the KMT reverted these changes back once it took power again. Although the KMT’s electoral prospects currently are dim, one can expect resistance against efforts to change the Chiang Kai-shek Memorial. It is also to be seen whether the DPP will decide it has sufficient political capital to take action on the issue at present, with the DPP needing to avoid the appearance of politically targeting the KMT, and shore up its approval rating for not only elections, but the upcoming national referendum.