TAIWAN REPORTED no new domestic cases of COVID-19 for the first time since the start of the outbreak today, as formally announced by the Central Epidemic Command Center (CECC) at its daily press conference. Today is the 101st day since the start of the outbreak on May 15th, when cases suddenly jumped to 180 cases overnight. If trends continue, cases will have peaked for Taiwan at under 500 during the current outbreak, and Taiwan returning to zero cases took place with vaccination coverage currently at 40.91%, which is 44.33 per 100 people, with fully vaccinated individuals at around 3.4%.

One imported case and one death were also announced. 92.5% of cases to date have been released from quarantine. Minister of Health and Welfare Chen Shih-chung stated that it was unusual that many media outlets knew ahead of time that there would be zero domestic cases reported today. 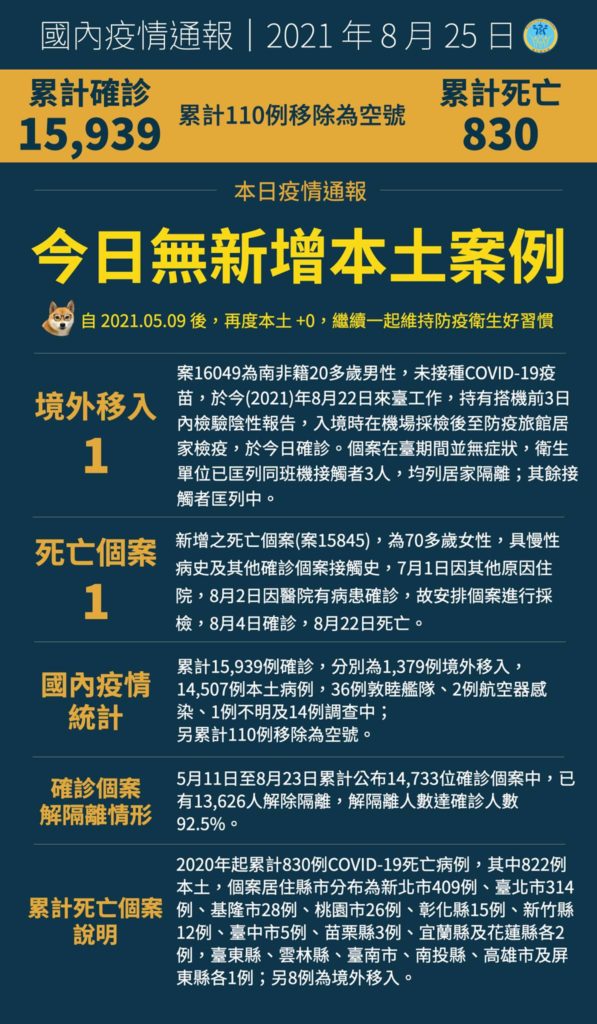 Chen Shih-chung stated that while today having zero cases represented progress, this did not mean that measures against COVID-19 should be slackened. According to Chen, the possibility of the Delta variant entering Taiwan from abroad was still a real one. This could potentially take place from people that enter Taiwan illegally, circumventing quarantine measures. Likewise, Chen called for increased contact tracing in order to find remaining transmission chains of COVID-19.

Many media questions today at the CECC press conference focused on reports of deaths after Medigen vaccination. Three deaths have been reported to date, with the CECC going over the cause of death today. One individual died after heart issues following vaccination, another individual had long-term issues such as diabetes, and another individual had a history of serious drug abuse and was observed using drugs on the day that he was vaccinated. The CECC emphasized that while the deaths are under investigation, correlation does not mean causation, and so the deaths cannot be attributed to Medigen prematurely.

That being said, this is unlikely to prevent wild speculation about the deaths by the Taiwanese media, and the pan-Blue camp is likely to leverage on such accusations to attack the Tsai administration. Many media questions today at the press conference speculated about the side effects of Medigen vaccines, including reports that individuals suddenly became hungry or full after vaccination.

As the incubation period for COVID-19 is fourteen days, it has been suggested in the past that Taiwan would be COVID-free if there are two complete incubation periods in which Taiwan has no new COVID-19 cases. When asked if measures would be relaxed if Taiwan saw 28 days with no new consecutive cases, Chen said that this could take place. It is possible that further measures will be relaxed on September 7th, with the current level two alert having been extended until then. That depends on the coming days and weeks.

Chen did not confirm any news about delivery of BioNTech vaccines. After FoxConn CEO Terry Gou traveled to Europe to urge faster delivery of the vaccines, Gou claims to have engaged in a bidding process to ensure that faster delivery would take place against European countries, and that vaccines could arrive in August at the earliest. This would be in the amount of 1.5 million vaccines. It was previously believed that BioNTech vaccines would arrive in September at the earliest. Some have taken comments by President Tsai Ing-wen on Monday, as she was being vaccinated with Medigen, that more vaccines would arrive before the end of August as referring to this purported shipment.

If Gou was successful in diverting vaccines from a shipment originally meant from Europe, they would likely be marked with the COMIRNATY brand that BioNTech is now labeling its vaccines as. That being said, Chen stated that the first batch of BioNTech vaccines will be marked “復必泰”, the brand name used by Shanghai Fosun, BioNTech’s greater Asia distributor. 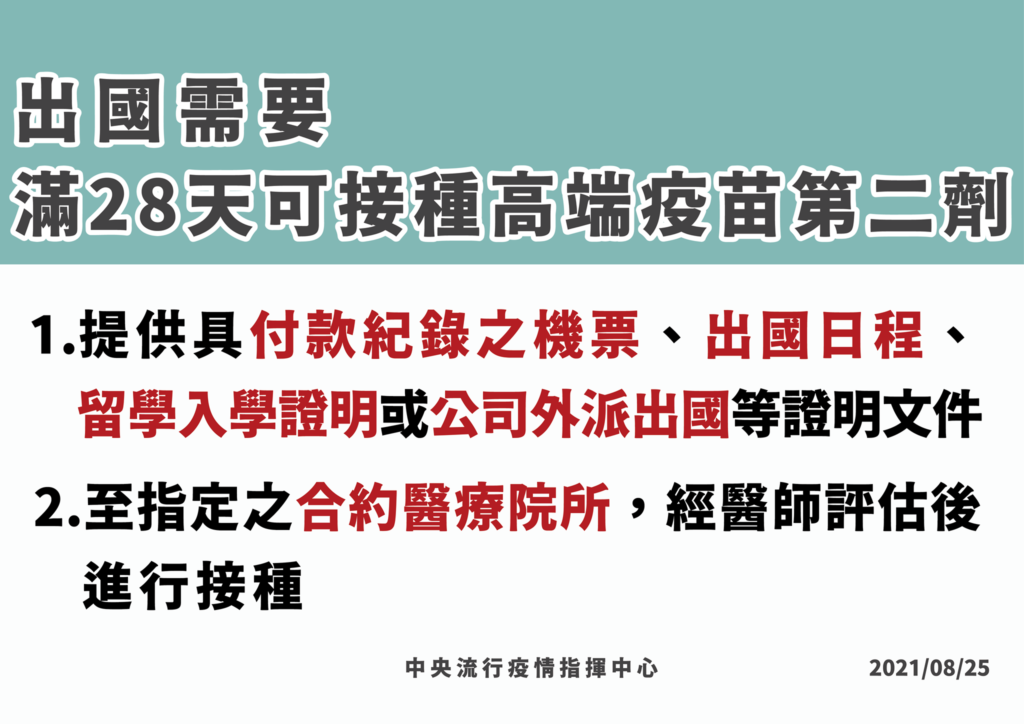 Despite Shanghai Fosun holding these rights, TTY Biopharm, which is chaired by former Tsai administration premier Lin Chuan, is still interested in trying to secure the rights for BNT distribution.

Taipei will continue with gradual reopenings allowing for 6,000 visitors per day to the Taipei Zoo and requiring that reservations be made ahead of time, while libraries are open but restricted to 40% capacity. Ko expressed concern about the effects of school reopenings. Taipei will use the Taipei Expo Center in the coming days to carry out some vaccinations.