EIGHT DOMESTIC CASES and two imported cases were announced at the Central Epidemic Command Center’s (CECC) daily press conference today. Six of these cases were already in quarantine, while two have unclear sources of infection. There were six cases in New Taipei, one case in Taipei, and one case in Taoyuan. 90% of all cases to date have been released from quarantine.

Fewer vaccinations took place yesterday, due to it being a Sunday. Vaccination coverage is at 39.04% now, which is 41.86 per 100 people.

With Medigen vaccinations available in the current, sixth round of vaccination, appointments started to be made this morning. Although an influx of traffic caused the system to crash this morning, this situation later stabilized. 42,000 appointments were made in the first few minutes after vaccine appointments could be made, starting at 10 AM. By 1 PM, 240,000 were registered. Around 40% of vaccination appointments in this round have been made. 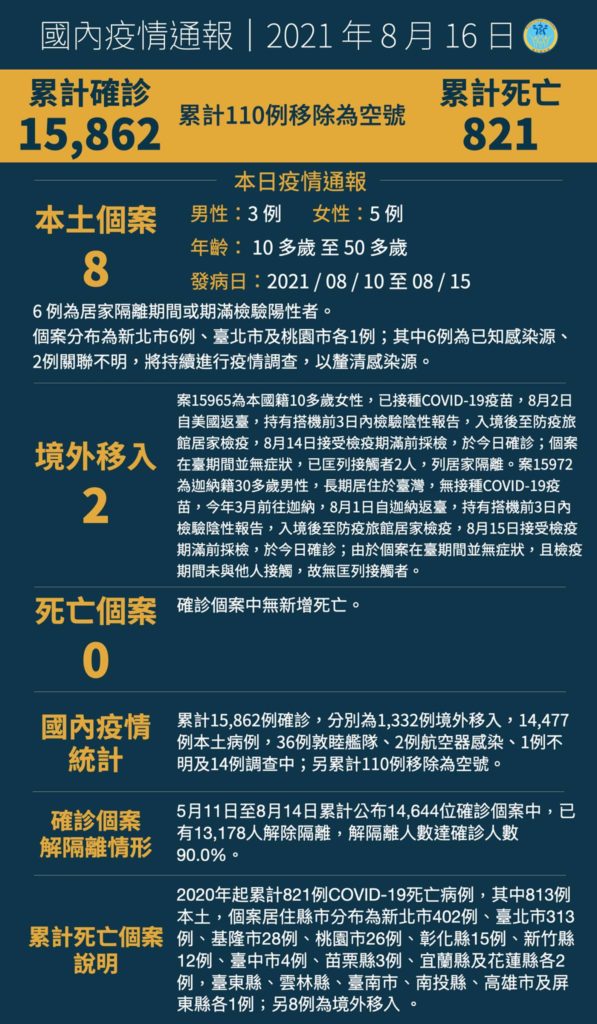 Likewise, 614,204 vaccines have cleared quality control inspection, but more vaccines may be added to this round if they clear inspection. The CECC hopes to vaccinate more people in this vaccination round.

It is expected that President Tsai Ing-wen will register for Medigen vaccination using the online vaccination registration system, the same way as with anyone else. The appropriate measures for her vaccination will be decided upon by authorities.

United Biomedical’s domestically manufactured vaccine has been denied Emergency Use Authorization (EUA), following a meeting of experts yesterday. 17 of 22 experts voted down United Biomedical’s vaccine being approved for EUA, with the chair of the meeting not participating in voting, though it was agreed that Phase 3 trial testing could be carried out. 3,000 were tested for safety as part of the trial, but the main concern is that United Biomedical’s vaccine did not meet the standards mandated by the CECC that domestically manufactured vaccines would have to be as effective as AstraZeneca vaccines. If United Biomedical wishes to publicize information on this meeting, or statistics for its vaccine, it can do so, but the decision is in the company’s hands.

The same decision making process for EUA was used for United Biomedical as with Medigen. An assessment of the materials needed and the costs is conducted as part of the EUA process.

When asked about reports of various groups not being vaccinated, the CECC stressed that drivers of quarantine taxis are category seven, while medical trainees are category one, meaning that they should be eligible for vaccination. Likewise, when asked about Premier Su Tseng-chang announcing incoming shipments of vaccines on his Facebook, the CECC stated that it has no issue with this, given that he is head of the Executive Yuan, though it makes the formal announcement of vaccine shipments.

The CECC continues to pursue efforts to obtain vaccines, including through the COVAX platform. Taiwan has purchased more vaccines than it needs, but the approval of domestically manufactured vaccines may allow vaccinations to take place more quickly, seeing as there are delays in shipments.

There were 142 adverse reactions to vaccines yesterday. 67 were non-serious, while four deaths took place after AZ vaccination, three deaths after Moderna vaccination, and there were 68 other reactions.

One of the imported cases today was already vaccinated with BioNTech vaccines but when they got COVID-19 may have been some time ago. 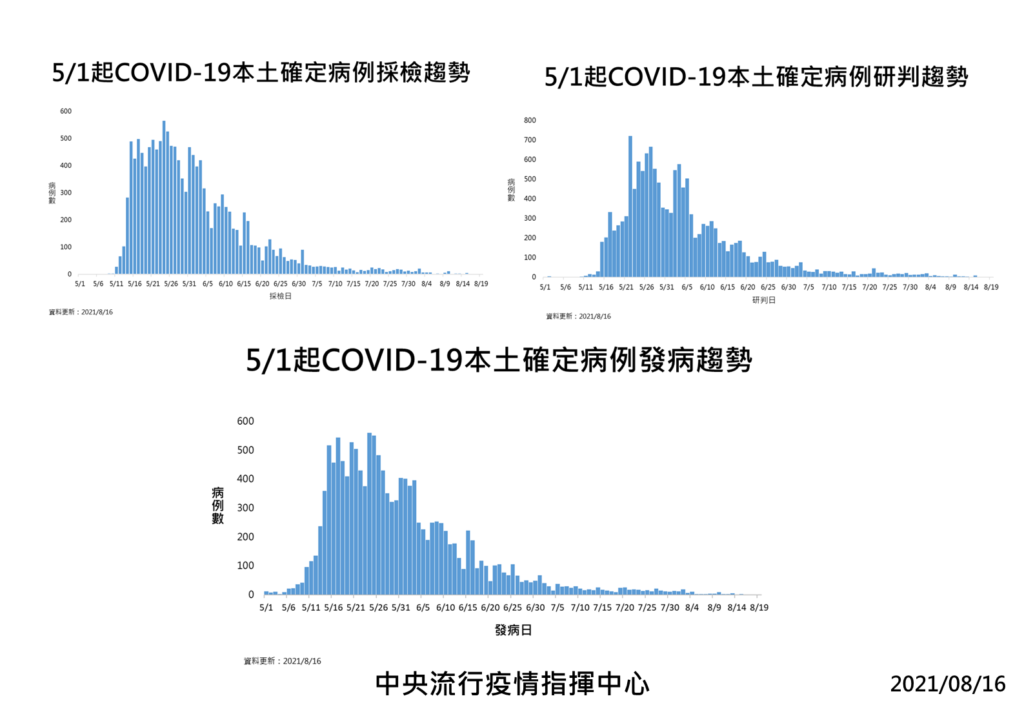 In response to criticisms from the KMT about which groups are being vaccinated, the CECC reaffirmed that officials it has directly vaccinated are mostly workers involved in the fight against COVID-19, including medical workers and police. When asked if he would run for mayor of Taoyuan, replacing Cheng Wen-tsan of the DPP, Minister of Health and Welfare Chen Shih-chung sidestepped the question.

The CECC currently does not have plans for a travel bubble with Japan, given the disparity in the COVID-19 situation there between different parts of Japan.

No manufacturer has applied for the rights to license COVID-19 tests for children in Taiwan yet.

Schools will be reopened in September. According to Chen Shih-chung, the decision to reopen schools was made by the Ministry of Education, with the CECC providing an advisory role on COVID-19 measures. That being said, the CECC never announced that schools would not be reopening in September, but planned to reopen schools if the COVID-19 situation was under control. The CECC will consult with relevant authorities regarding which measures can be relaxed next.

According to New Taipei mayor Hou You-yi, five of the six cases in New Taipei were already in quarantine. Only one case had an unclear source of infection. One of these cases traveled to Hualien from August 7th to August 9th. This person’s fellow travelers have been tested, with some found positive, and quarantined. All of these individuals worked in Taipei, with their co-workers also quarantined. While one case was found in Yonghe today, this was not linked to previous cases.

New Taipei will resume in-person classes, but if a class has a COVID-19 case, classes will be moved online for fourteen days. If a school has two COVID-19 cases, classes will be moved online for the entire school for fourteen days. When classes resume, a hybrid model will be used, with dividing up shifts. 90% of teachers in New Taipei have been vaccinated.

According to Taipei mayor Ko Wen-je, the one case in Taipei today had an unclear source of infection. The one case in Taipei from today and the one case from yesterday were undocumented migrant workers which Ko touted as a sign of success in fighting COVID-19, in that remaining transmission chains were among hard to account for demographics. Ko reemphasized his view that Wanhua was no longer a hotspot. 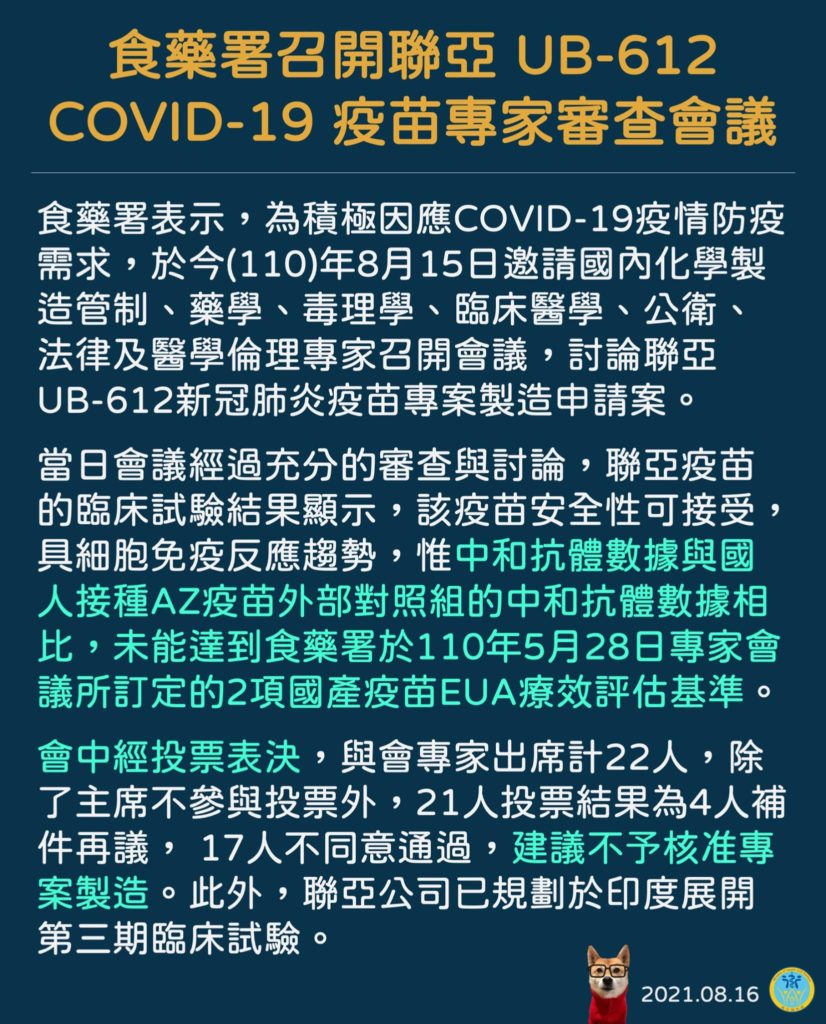 Information on the decision not to approve EUA for United Biomedical. Photo credit: Ministry of Health and Welfare/Facebook

Ko also stated that more and more people were entering Taiwan now, with 6,552 in quarantine hotels as of yesterday. This has led to concerns regarding the possible spread of Delta, though this has benefits for the hotel industry. Taipei will relax some measures for crane claw machine stores, requiring hourly inspections and disinfections, the installation of announcement systems and surveillance equipment, but not the hiring of a dedicated staff member. This may still lead to issues for crane claw machines, however. Taipei will consider measures to reopen once the central government does.

Another round of home vaccinations for categories 7, 8, and 9 will take place from August 19th and September 30th. Those nineteen or above can apply for this, though this is expected to primarily target the elderly.

Taipei may diverge from New Taipei and other cities in terms of reopening schools, with Taipei still intending to primarily use online teaching when schools resume, though this will also involve a hybrid model. Taipei likely does not wish to reverse course from a previous announcement made by Ko earlier on in the outbreak that Taipei would primarily move to online teaching. Taipei will eventually make a more detailed announcement about reopening schools, though the ambiguity may create disruptions for teachers and families in the meantime.