The Chinese government justified banning imports of Taiwanese pineapples after China’s General Administration of Customs claimed to have found mealybugs in shipments of pineapples shipped last year between March and May. This would be a rather lengthy delay for announcing a ban, which was instead quickly understood as an attempt by China to hit at Taiwanese farmers by cutting them off from a major export market. With new controls having been introduced in October to deal with the problem, there were no reports of bugs in shipments of Taiwanese pineapples to China after then. According to customs data, China only found 13 instances of mealy bugs among pineapple export batches, while 99.79% of pineapple exports passed inspections. 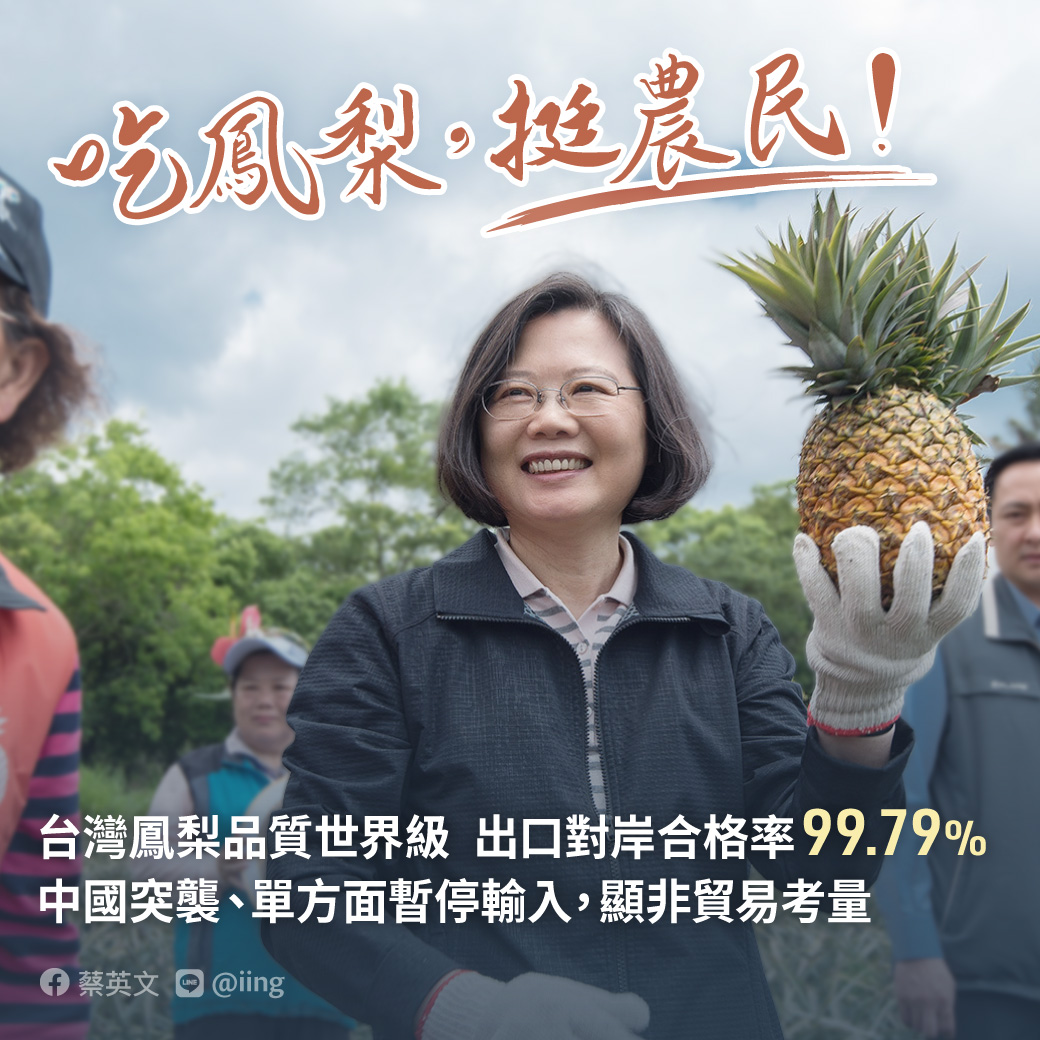 It is further notable that China announced the ban on March 1st, early in the harvest season for pineapples in Taiwan. Pineapple harvest season usually goes from February to June, across different parts of Taiwan. As such, by announcing the ban with no prior warning, the Chinese government was likely hoping that this would lead to Taiwanese pineapples intended for export having nowhere to go.

Minister of Foreign Affairs Joseph Wu was quick to respond on social media, calling for a “#FreedomPineapple” campaign reminiscent of Australia’s “#FreedomWine” campaign. The “#FreedomWine” social media campaign was begun last year in response to suddenly announced tariffs by China on Australian wine imports as a means of retaliation aimed at Australia, with politicians from more than nineteen countries joining the campaigns. A number of Taiwanese politicians participated in the campaign by posting pictures of themselves drinking Australian wine and Australian wine was served at state functions. The Council of Agriculture also called on Taiwanese consumers to support the domestic pineapple industry by purchasing Taiwanese pineapples.

This attempt to rally Taiwanese consumers behind the domestic pineapple industry was successful, with more pineapples sold in four days than would have been sold to China this year. The US and Canadian representative offices in Taiwan also posted about the #FreedomPineapple campaign.

That being said, only 10% of Taiwan’s domestic pineapple produce is exported, and so it may not be too surprising that Taiwanese consumers were able to quickly make up for the shortfall. In the wake of the ban, the Council of Agriculture and industry experts have urged the diversification of fruit export markets for Taiwan, as well as the patenting of plant varieties.

As also observed with the tariffs introduced on Australian wine, the Chinese government may be increasingly using bans and tariffs as a weapon against political opponents. In addition to tariffs and bans, the Chinese government has also encouraged boycotts of goods produced by countries it has antagonisms with in the past, such as a boycott of South Korean consumer goods in 2017 over the THAAD anti-missile system deployed by the South Korean government to ward off possible missile threats from China or North Korea.

Here we go again! Our pineapples are now banned by #China to punish farmers in the south. Remember #Australia‘s #FreedomWine? I urge like-minded friends around the globe to stand with #Taiwan & rally behind the #FreedomPineapple. JW

Alternatively, the Chinese market may have been hoping to target Taiwanese farmers with its ban, in pressuring them to back the KMT and to try and push farmers into acting as a pro-China interest group in Taiwan. Farmers have historically feared being cut off to not only the Chinese market but irrigation networks constructed during the authoritarian period, managed through farmers’ associations long dominated by KMT clientelist networks—something that the pan-Blue camp has leveraged on to prevent farmers from voting pan-Green.

That being said, backlash against China’s actions was such that KMT politicians, too, called on China not to bully Taiwanese farmers and urged support for them. This included both comparatively pro-reform politicians such as current chair Johnny Chiang and deep Blue politicians such as media personality Jaw Shaw-kong, who will be a rival of Chiang’s during the next KMT chair election. As such, reactions against China’s pineapple ban were surprisingly bipartisan.

It may be that China has miscalculated, with a move that was read as bullying Taiwan and led to a response consolidating of Taiwanese identity, rather than a response that would have forced the Tsai administration to back down. One has observed similar responses to other acts of international bullying by China in the past, such as regarding Taiwan’s exclusion from international organizations such as the World Health Organization or the International Civil Aviation Organization.

This would also not be the only event in recent memory in which identity issues became yoked to contestation regarding food. During the protests that broke out in Hong Kong in 2019, Taiwanese beverage chains were pressured to declare support for One Country, Two Systems, leading to backlash against beverage chains otherwise known for selling Taiwan’s “national beverage”—bubble tea. Bakery chain 85°C Bakery declared support for the 1992 Consensus after backlash from China following a visit by Taiwanese president Tsai Ing-wen to an American location of the chain. Angry responses also broke out against champion baker Wu Pao-chun—previously viewed as having shown Taiwan’s achievements on the international stage through his baking talents—in 2018 after Wu declared that he viewed himself as Chinese, with his bakery chain set to open several locations in China.

Yet, to this extent, one notes that China’s ban of Taiwanese pineapples last week, tariffs on Australian wine last year, or boycott of South Korean fast food, or consumer goods such as cosmetics and clothing, were all substitutable consumer goods. China has not moved to ban, impose tariffs on, or boycott intermediate goods that its own supply chains depend on, such as Taiwanese or South Korean semiconductors, or display panels. China would likely hurt itself more than it would harm political opponents through banning, imposing tariffs on, or encouraging the boycott of such goods. In the interconnected world of global capitalism, trade relations go both ways.

Tested & verified by the diplomatic community, #FreedomPineapple is simply the best! JW pic.twitter.com/XBRUVlYp0p

It is to be seen whether China attempts to target other fruit exports from Taiwan, with some concerns about exports of wax apples from Taiwan after the suspension of a shipment of wax apples. Though this has been stated to be just an isolated case, it is not inconceivable that China will target other fruit exports aimed at the Chinese market from Taiwan, or other goods going forward. A precedent for how the Taiwanese consumer market responds to such pressures has been set by reactions to China’s pineapple ban, however.