23 DOMESTIC CASES and one imported case was announced at the Central Epidemic Command Center (CECC) daily press conference today. Eleven of these cases were already in quarantine. Two deaths were announced. Thirteen cases were in New Taipei, while there were four cases each in Taipei and Taoyuan, and one case each in Yilan and Kaohsiung. 18 cases have known sources of infection and five cases have unclear sources of infection. There have been less than ten cases with unclear sources of infection per day for the last week. As such, that cases have been slightly up in the last two days does not change the overall direction of future measures.

The CECC announced that the level three alert will be lifted on July 27th today, with a shift to level two. The level two alert will initially last to August 9th. Minister of Health and Welfare Chen Shih-chung cited the case numbers of other countries in the region in comparison to Taiwan as he announced this, including countries that initially did well in the fight against COVID-19. 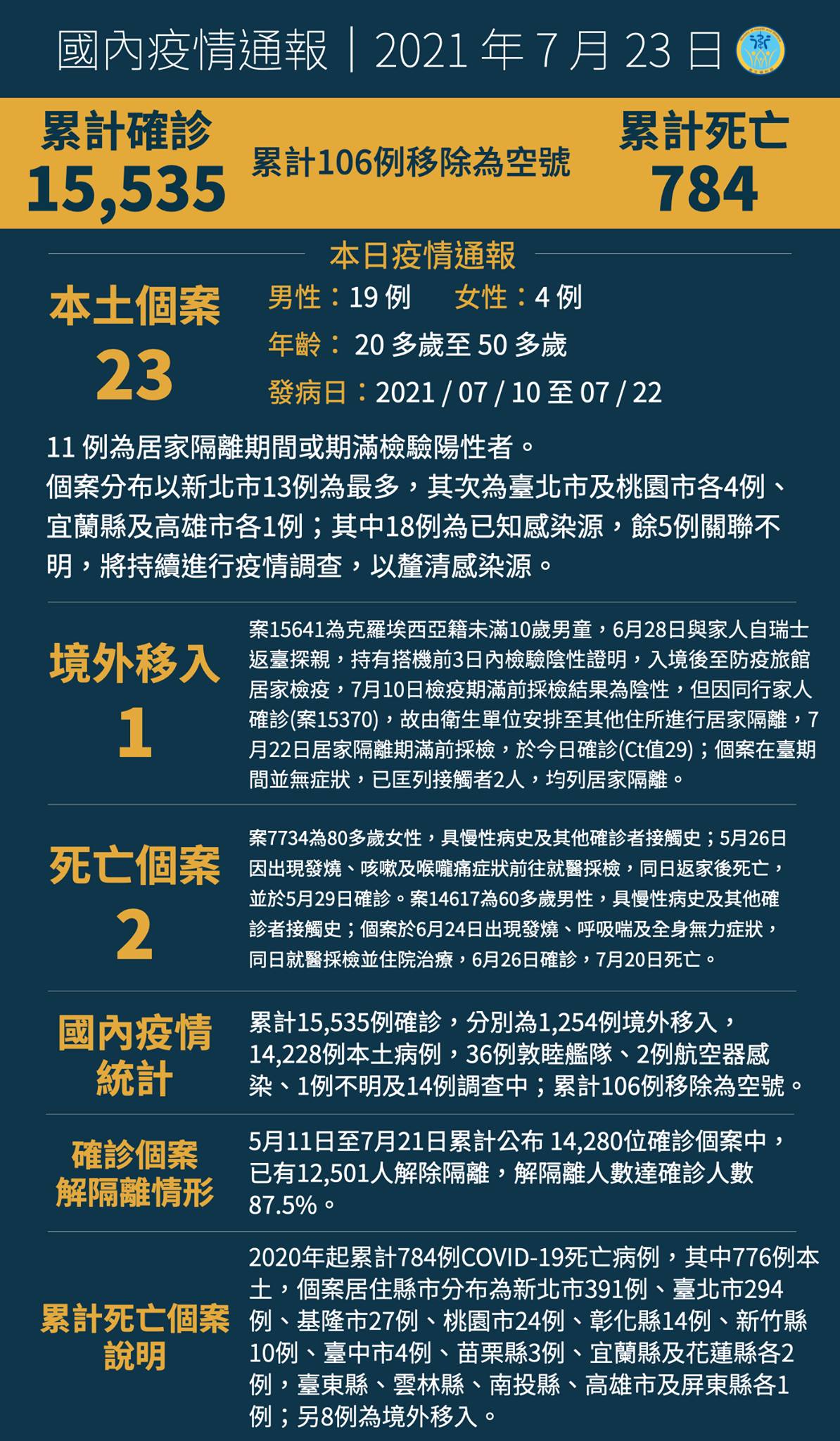 Mandated mask-wearing, social distancing, and QR code registration will be maintained for the level two alert, though mandated mask-wearing was not required for the level two alert in the past. Restrictions on indoor events are now increased to no more than fifty, while outdoor events cannot have more than 100. Plans must be provided for holding larger events.

Indoor dining is allowed for restaurants, but social distancing must be maintained and barriers must be set up between customers.

Weddings and religious gatherings can take place, but this must maintain the same restrictions on indoor and outdoor gatherings. The groom and bride will not be allowed to move between tables to make toasts during weddings, while religious gatherings are generally still not open to the public. Smaller Ghost Month activities will be considered.

Bars, nightclubs, KTVs, arcades, board game venues are still closed. Crane claw machines can reopen, but must have a dedicated staff member to carry out regular disinfections and to prevent violations of restrictions on indoor gatherings. At least Taipei has stated that it does not believe it is possible to inspect the 600 crane claw machine stores in Taipei to see if they are implementing this, so it may not carry this out.

Travel groups of under fifty are allowed. Individuals can be divided between buses. Eating can take place on buses with sufficient social distancing and staggering of groups. Singing is not allowed on tour buses. Shrimping can take place, but masks must be worn. Fishing ports are reopened.

Museums. libraries, and galleries are reopened, though social distancing must be maintained.

Basketball and tennis courts are reopened, but masks must be worn and QR code registration must take place. Swimming pools are not open because it is not possible to wear a mask while swimming, but diving and jet skiing is allowed.

Beaches are open, but crowd control measures will be implemented. Forests and parks will have parking maintained at 50%. Camping areas are reopened, but ecological areas in parks are still closed.

Community colleges are open for registration, but not opened. Cram schools, kindergartens, and care centers for the elderly and individuals with disabilities are reopened, though over 80% of workers must be vaccinated, and negative tests required every three to seven days for those who are not vaccinated. For venues with performers, including at temple events, performers must have negative test results and maintain a distance from the audience if they do not wear masks during performance.

Eating areas will be set up for the High-Speed Rail, though eating is generally not allowed.

Massages are allowed, but disinfection must be carried out regularly and customers and staff must wear masks.

Hospitals are not allowing visitors. Regulations for long-term care institutions will be announced tomorrow. 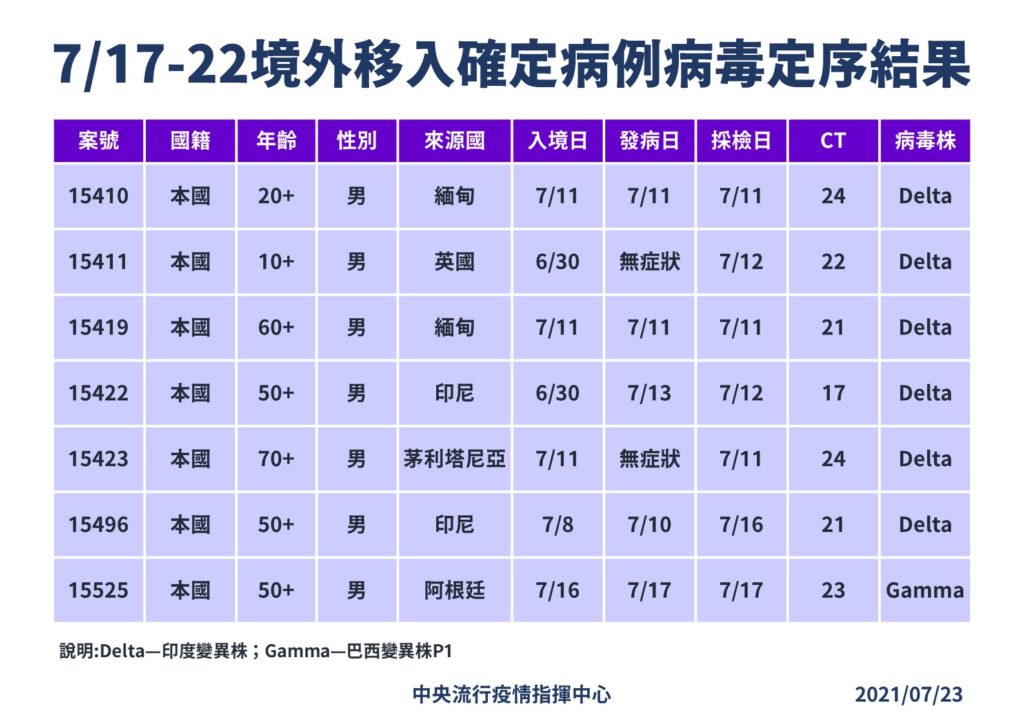 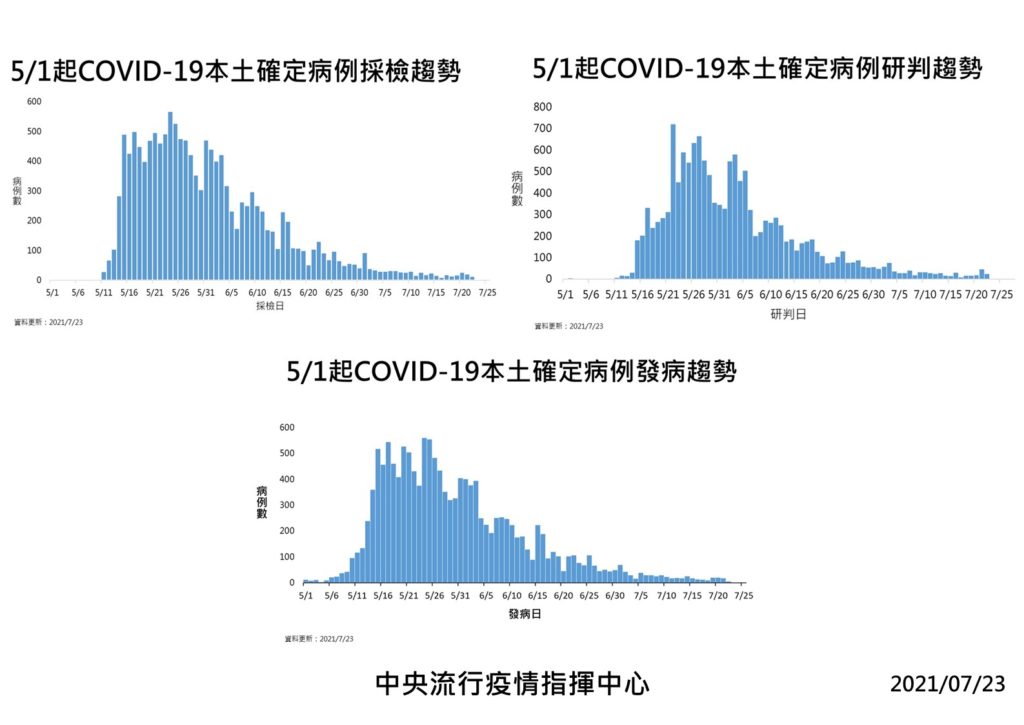 Information on the variants of imported cases (left) and further data released by the CECC (right). Photo credit: Ministry of Health and Welfare/Facebook

The CECC believed that companies should maintain remote work if possible, but it will not force companies to adhere to this. Businesses can decide not to reopen, as well. Rolling adjustments are still possible within the framework of level two.

In his comments, Chen Shih-chiung emphasized that Taiwan was a democratic country, so that Taiwan needed the willing cooperation of the public regarding these measures.

New Taipei mayor Hou You-yi stated that New Taipei would prioritize opening outdoor establishments, indoor establishments, and establishments in which masks are removed in that order, meaning that restaurants will not be reopened at this time. Hou stressed that the relaxation of measures must be gradual and take place step-by-step, arguing that the future development of the outbreak was still uncertain.

Hou stated that care centers and kindergartens in New Taipei will be shut down for 14 days in the event of COVID-19 cases there. Cram schools can be reopened if teachers are vaccinated or negative test results are regularly provided. With 95.88% of workers at care centers in New Taipei are vaccinated, 727 institutions are expected to conditionally open. Eating seems to be allowed in care institutions if barriers are set up. Some vaccination sites in New Taipei will be shut down in the next few days due to the typhoon.

Taipei mayor Ko Wen-je stated that he expects Taipei to continue to see one or two cases with unknown sources of infection per day and that it currently takes around 1,000 tests to find one positive case of COVID-19, making this an expensive endeavor. Vaccine coverage for Taipei is around 35% currently.

Taipei will continue to provide services for individuals unable to use the online registration system until July 30th. Otherwise, Ko stated that he believes that the nation will move toward using a vaccine passport system and that he hoped to use the TaipeiPASS system for this. Ko stated that Taipei would consider measures for restaurants and night markets affected by the outbreak and criticized vaccination measures by the central government, claiming that there are many leftover vaccines from vaccinations conducted by the central government, while Taipei was more efficient.

To this extent, Ko claimed that the Emergency Use Authorization for domestically-manufactured Medigen vaccines was strange, seeing as the results of the relevant trials will only be unblinded in October. Ko downplayed the government’s announcement of 36 million Moderna vaccine purchases yesterday, stating that the key point was when the vaccines arrived in Taiwan. Ko commented that he regretted lashing out at CECC official Wang Bi-sheng, who coordinated management of the TAPMC/Huannan Market clusters, but claimed the situation was under control when Wang was sent to oversee the situation and attacked what he claimed was slow contact tracing by the central government.

The CECC will consider measures for fully vaccinated individuals entering Taiwan, such as relaxed measures.

147,725 were vaccinated yesterday, with numbers lower since this was the last day of the current round of vaccination. Vaccination is currently at 24.94% coverage, which increases to 25.8% per 100 people. Chen stated that it was an issue that individuals were competing to be vaccinated, commenting that there was a need to better communicate information on vaccination availability to the public.

Information from the CECC on the new alert measures. Photo credit: Ministry of Health and Welfare/Facebook

The Miaokou Night Market in Keelung is expected to reopen on July 27th. More than 95% of store owners have been vaccinated. The market has been closed for nearly two months.

With unemployment climbing to 4.8% in June, Taiwan has experienced the highest rate of unemployment in ten years.