76 DOMESTIC CASES and five deaths were announced at the Central Epidemic Command Center’s (CECC) daily press conference today. The CECC announced that among the 76 domestic cases reported today, 34 cases were found in quarantine, while 42 were found in the community and must be contact traced. 73.2% of cases to date have been released from quarantine. 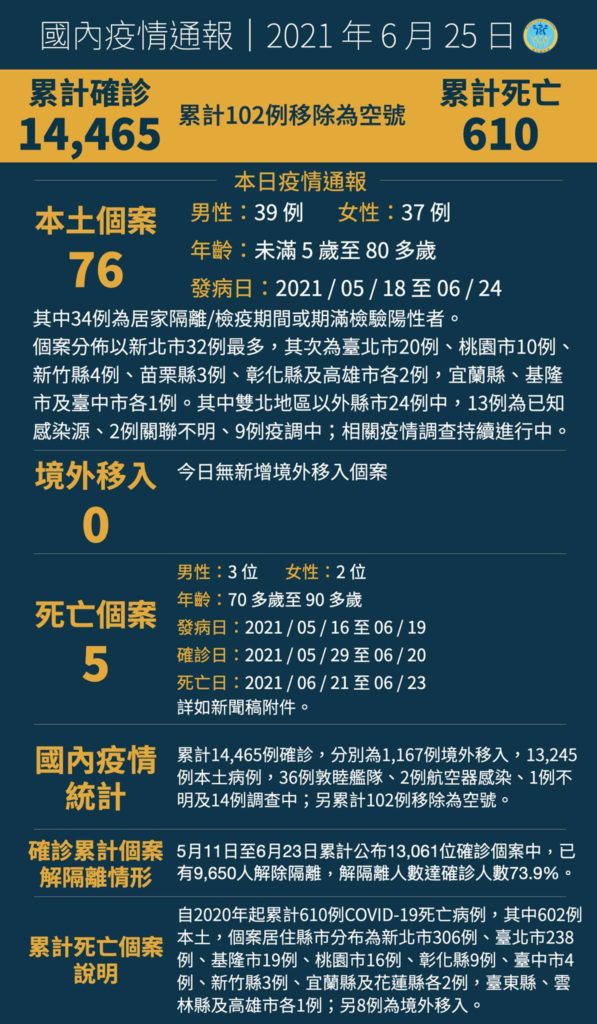 In addition to five imported cases found with the Delta variant of COVID-19, two more imported cases found to have the Delta variant were announced today. As such, the CECC stressed the need to strengthen quarantine measures for individuals arriving in Taiwan, with home quarantines no longer allowed and individuals entering Taiwan put in quarantine hotels or facilities, requiring PCR tests before they are released from quarantine. Airline workers will be quarantined in specially designated facilities. Individuals traveling from high-risk countries will be PCR tested before quarantine, as well as afterward. The CECC seems highly concerned about the more transmissible Delta variant of COVID-19 entering Taiwan.

Similarly, there continue to be concerns about the COVID-19 cluster at the Taipei Agricultural Product Marketing Corporation (TAPMC), which handles distribution of 1/3rd of fruit and vegetables for Taiwan as a whole. Minister Chen Chi-chung, who heads the Council of Agriculture, was present at the CECC press conference today to provide updates on the situation.

A COVID-19 infection at the Wanda Market, which is located near TAPMC, has led 36 stalls to be closed for disinfection. It is expected that this will take place for three days. COVID-19 cases have also been found at the Huanan Market, which were linked to TAPMC. 11 of New Taipei’s 32 cases from today were linked to TAPMC, meaning that 34% of cases from today in New Taipei were due to the TAPMC cluster.

Concerns have been raised that the Taipei city government’s vaccination of TAPMC personnel will lead to confusion and an inability to find COVID-19 cases, due to difficulty distinguishing between symptoms of COVID-19 and of vaccination. It is still possible to become infected with COVID-19 despite being vaccinated.

The CECC is coordinating with local fruit and vegetable markets. Over 5,000 have been tested in Taipei in connection with TAPMC, while over 3,623 were tested in fruit and vegetable markets in New Taipei. 15 were found positive in Taipei, while all results came back negative in New Taipei. Going forward, TAPMC workers and Huanan Market workers will need negative test results before being allowed to enter, and workers will need to provide daily health updates.

Of particular concern is that five of the 15 workers that tested positive in connection to TAPMC were working in the vicinity of TAPMC but not directly in TAPMC. The CECC has stressed that this means that the neighborhood must be systematically tested, hotspots must be drawn up, and contact tracing must take place. While vaccination may be helpful, vaccines do not take effect until 14 days after vaccination.

KMT politicians including party chair Johnny Chiang and former presidential candidate Eric Chu lashed out at the Tsai administration’s difficulties in vaccine acquisition yesterday, pointing to the dangers of the Delta variant of COVID-19. The KMT has also attacked the fact that Taiwan’s death rate is twice the global average. 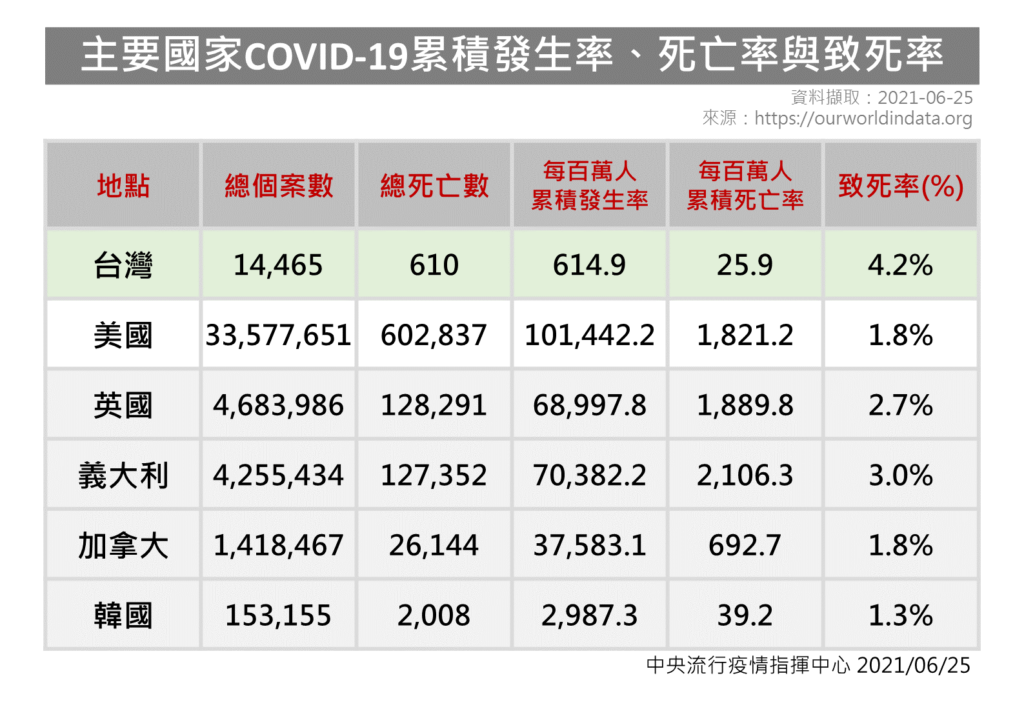 Death rates of COVID-19 for Taiwan compared to other countries (left) and information on the newly announced deaths from today. Photo credit: Ministry of Health and Welfare/Facebook

The CECC responded to claims that Taiwan has a death rate twice the global average today, citing that the death rate has declined since June, with the stabilization of medical capacity. The CECC pointed to how other countries also experienced higher death rates earlier on in the outbreak, when medical capacity was limited.

Chen Shih-chung also stated that the rate of infection at testing sites in Taiwan was always low, peaking at around 2.8%. Responding to accusations that the CECC is hiding cases, Chen emphasized that there is no hiding the spread of COVID-19, as cases would become visible sooner or later.

With the release of home test kits, the NPP has stated that it believes this may be of limited use in preventing the spread of COVID-19, due to the lack of any centralized system for reporting positive COVID-19 cases. The NPP has also called for the expansion of financial relief measures passed by the Executive Yuan, since relief measures still specify that they are aimed at individuals making less than 408,000 NT per year.

Radio host Clara Chou, who sometimes reports on news leaks ahead of time, asserted on air that she has information suggesting that Moderna vaccines would be arriving over the weekend. Some speculation has also focused on a Facebook post by DPP legislator Wang Ting-yu suggesting that there would be good news announced over the weekend. The CECC neither confirmed nor denied reports about an impending Moderna shipment.

With Novavax having been shown to have more than 90% efficacy through phase three trials, Taiwan is currently trying to purchase Novavax through COVAX.

The Hongpin Beef Noodle Shop, a well-known restaurant in Tainan, has announced that it will be closing at the end of the month. This is reportedly due to losing more than 800,000 per month due to the current outbreak.

Taipei city councilor Lin Ying-meng criticized the Taipei city government’s investigation into vaccinations conducted at the Good Liver Clinic today. The investigation reportedly has been kept confidential by the Taipei city government, with city councilors only provided a five page condensed version. To read the more detailed version, city councilors are only allowed to read within a designated room for 30 minutes and must leave if they have not finished, and they are not allowed to take photographs or take notes.

Going forward, back-up lists will be set up for leftover doses of vaccine in bottles. Individuals over 18 years old can register. This may be perceived as something of a policy U-turn for the CECC, seeing as the CECC originally suggested that vaccination set up back-up lists consisting of individuals in the eligible vaccine categories. Different local governments will carry out registration for the back-up list differently, with some governments expected to use registration systems, while other governments will do this through lizhang. According to the CECC, Audrey Tang’s vaccine registration system is ready to launch, but it has not launched the system because current measures seem sufficient, and the CECC does not wish to create confusion. There does not seem to be a way to easily integrate systems for leftover doses, however, which will require coordination with local authorities. 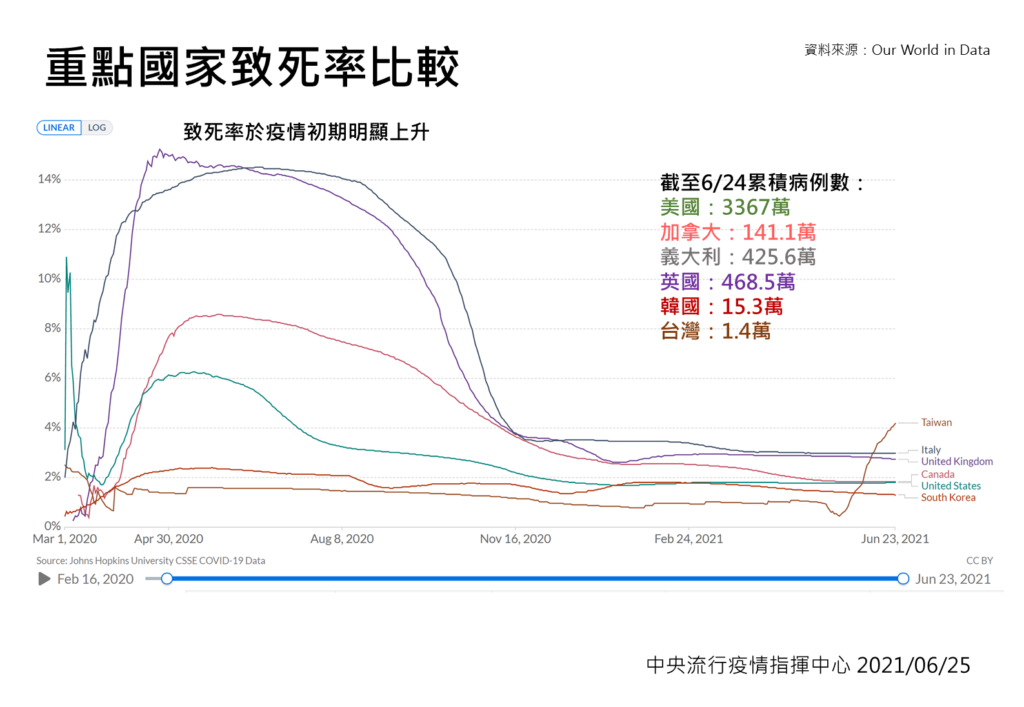 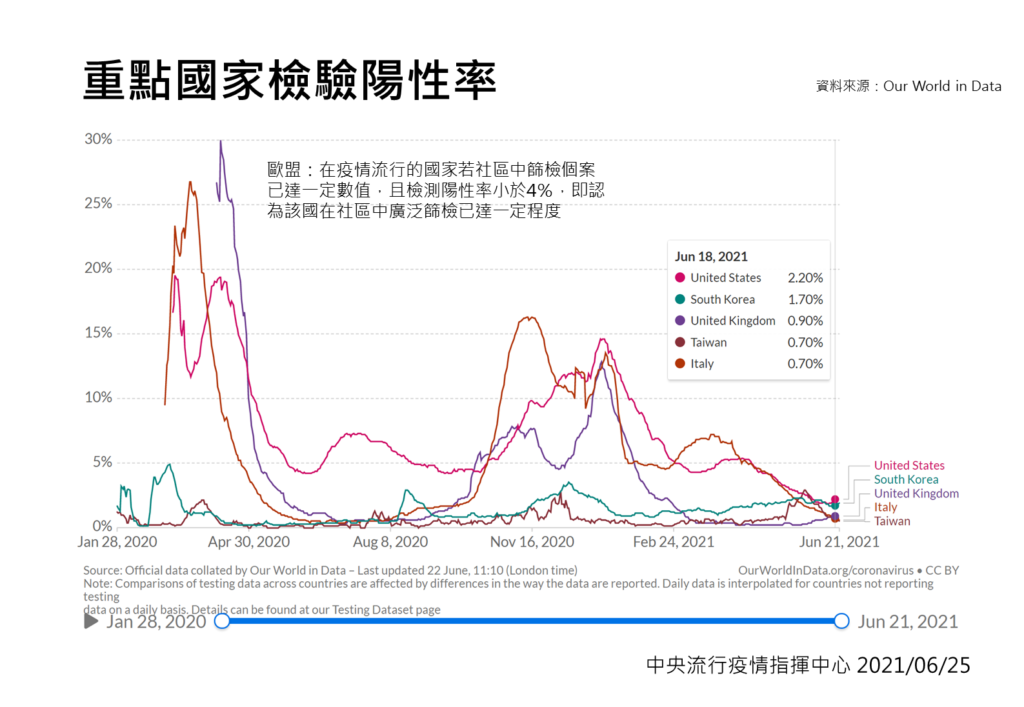 Further data released by the CECC on how Taiwan’s death rate compares to other countries. Photo credit: Ministry of Health and Welfare/Facebook

With vaccination having opened up to pregnant women, testing sites are reporting that close to 100% of women are choosing Moderna vaccines. This seems to be due to the belief that Moderna is safer.

After the withdrawal of the CECC from the King Yuan electronics factory, where clusters broke out among migrant workers earlier this month, King Yuan will resume normal work starting on June 28th. This has led to concerns that King Yuan will not divide up work shifts, leading to further clusters in the future, particularly seeing as the current level three alert has been extended until July 12th, with criticisms from Miaoli city councilor Tseng Wen-hsueh, among others.

Reportedly, a guard for the Taipei mayor’s office that is part of Ko Wen-je’s security detail has tested positive for COVID-19. Ko has been urged to be tested.

14 new deaths have been reported as having taken place after vaccination, though autopsy results of deaths after vaccination have shown no link between vaccinations and deaths, and 200 individuals above 70 die in Taiwan per day. The age range of those that died was from 52 years old to 97 years old. 13 were above 70.

79,780 were vaccinated yesterday, which is an improvement from past days, with declines due to fears about the safety of COVID-19 vaccines. With media questions focused today on whether currently available vaccines are effective against new variants of COVID-19, it is to be seen whether media speculation next turns toward whether premature conclusions that vaccines are useless against new variants—suggesting the public might as well avoid being vaccinated for fear of sudden deaths.