A PRAYER CEREMONY and rally in solidarity with Myanmar was held this afternoon in Liberty Plaza, also known as the Chiang Kai-shek Memorial. Around 1,000 participated in the rally.

Many participants were members of the Burmese diaspora in Taiwan, a number of which are ethnically Han. Exact statistics for the total number of Burmese diaspora are unclear, because many have naturalized to Taiwanese citizenship. That being said, there are between 30,000 and 40,000 residents of Little Burma on Huaxin Street in Zhonghe alone. 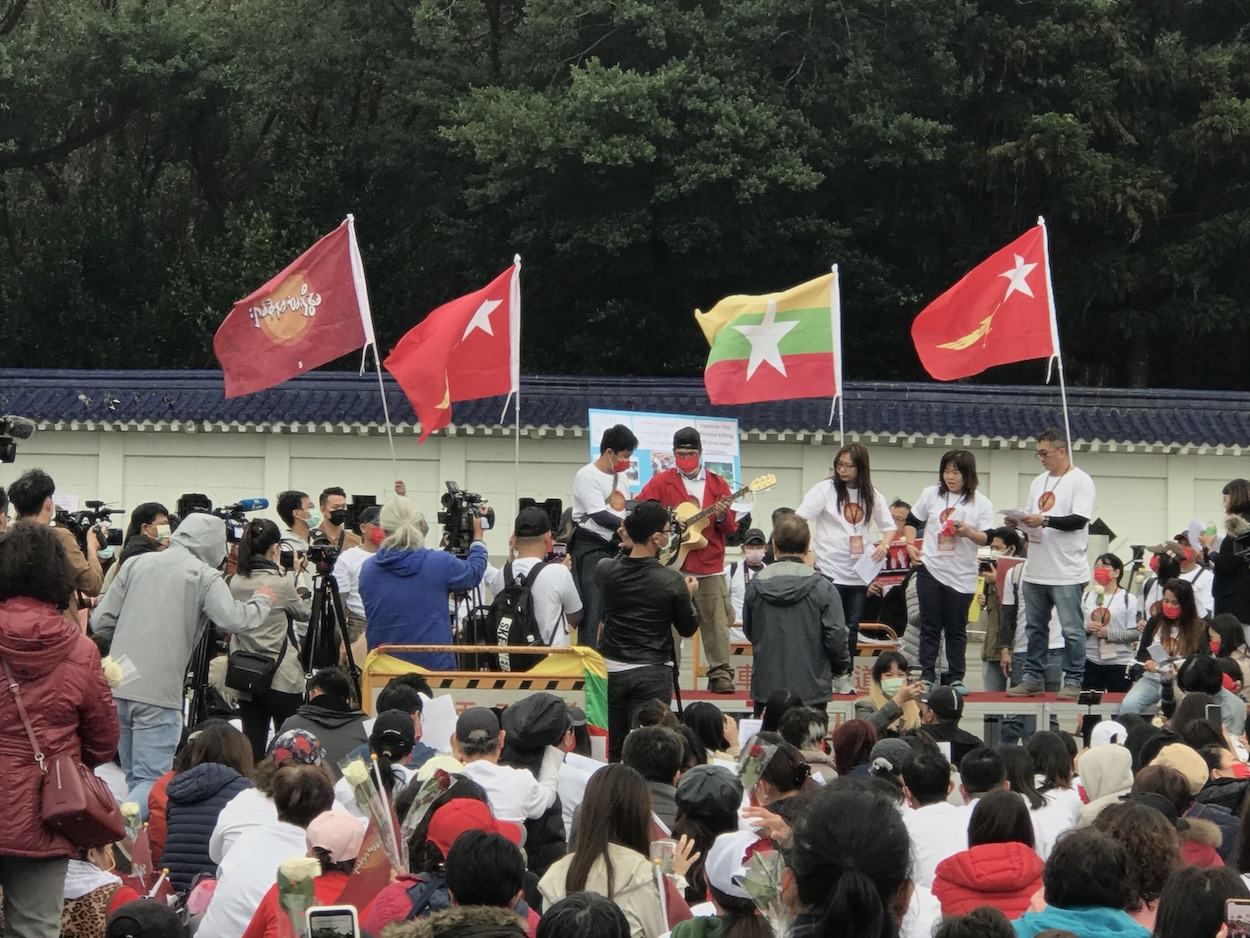 As such, the large number of participants in the rally should not surprise. A previous solidarity rally held in Little Burma in February drew hundreds, but today’s rally was noticeably larger. Many of the same speakers spoke at February’s rally and today’s rally, in which the red flags of the National League for Democracy (NLD) and portraits of Aung San Suu Kyi were carried by many participants. NLD flags and Aung San Suu Kyi portraits are displayed in many stores in Little Burma. 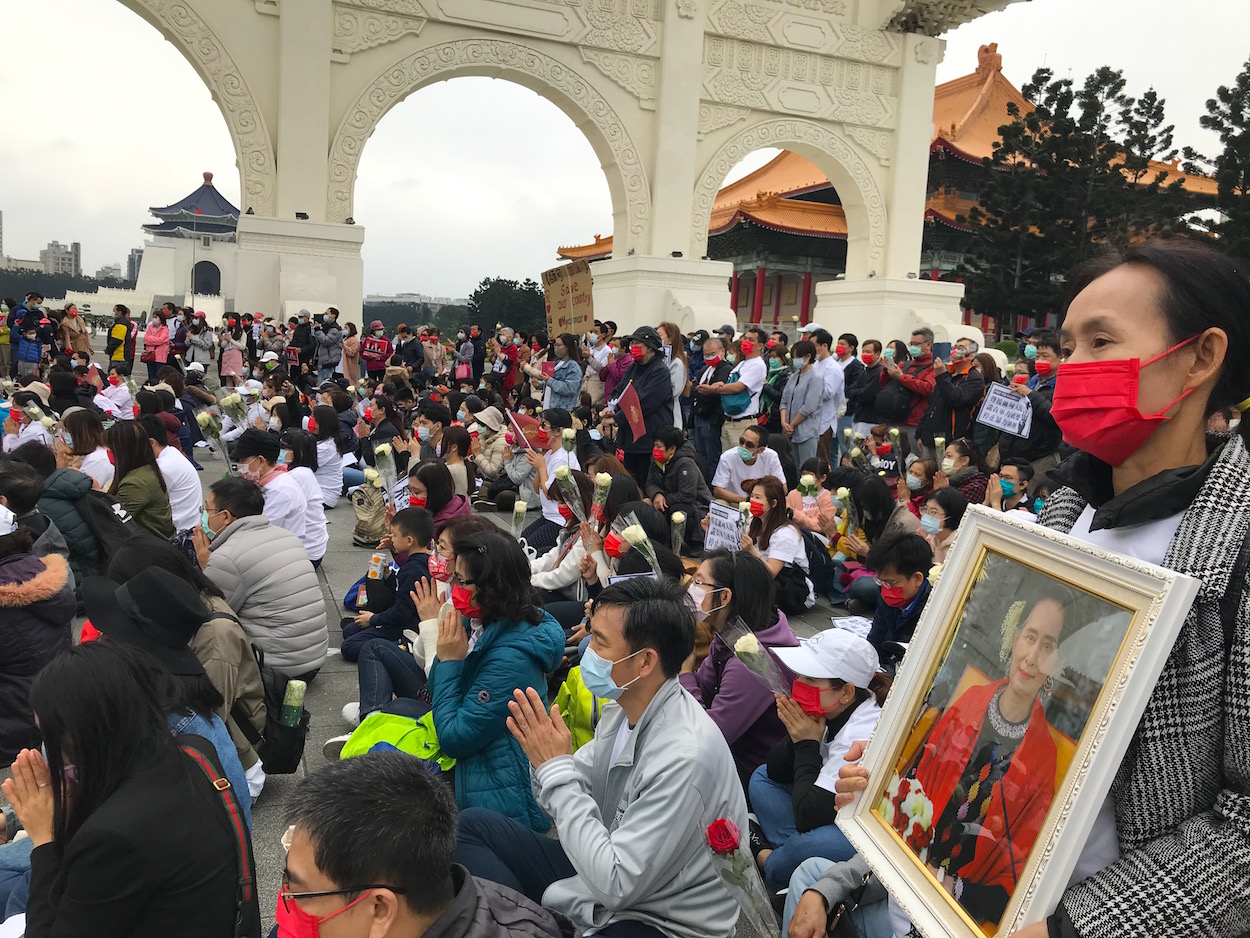 During the rally, open registration was held for speakers that wanted to speak, but this was quickly filled up. Traditional songs played at protests in Myanmar, such as “Kaba Ma Kyei,” the Burmese national anthem, and “Dictators Out”, were sung by the crowd.

The former was accompanied by a band, while the crowd drummed along to the latter. Members of the crowd drummed on an assortment of pots, pans, plastic cartons, cookie tins, using drumsticks, chopsticks, and other utensils. While these songs were being sung, members of the crowd frequently displayed the three-finger salute, something seen in protests over the last year in both Thailand and Myanmar, as originally derived from The Hunger Games. The use of the three-finger salute reflects the transnational exchange of tactics that have taken place with pro-democracy protests in Asia over the past year, as well as how global pop culture has created a shared vernacular between disparate political contexts.

Signs with photos of deceased protesters killed by the military and a Lennon Wall-like installation to leave messages for the deceased protesters were also set up. This may reflect an exchange of tactics between Myanmar and Hong Kong. Likewise, many participants carried held red and white roses. 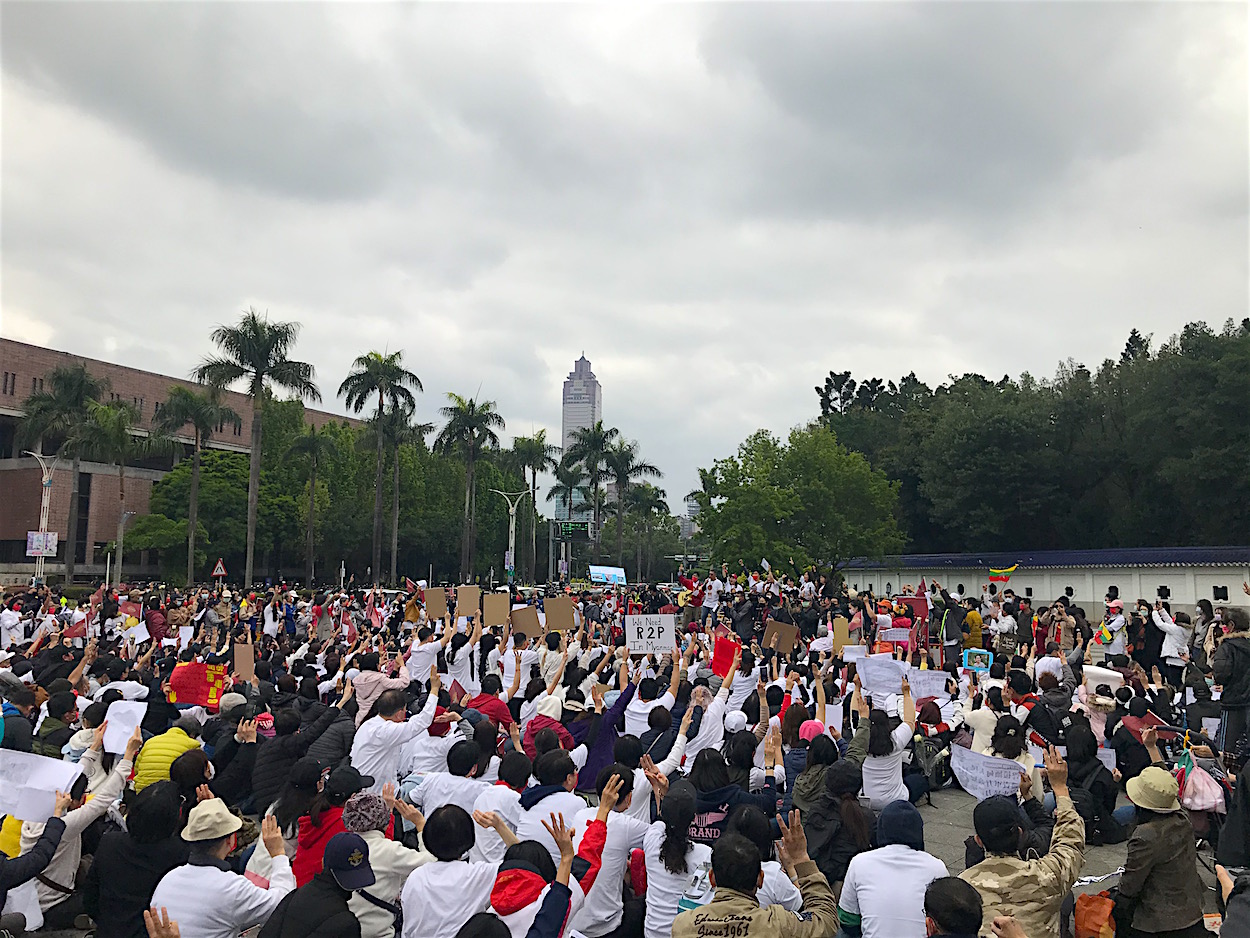 Among the Taiwanese speakers were DPP legislator Hung Sun-han, who stated that he believed that Taiwan should take a stand on behalf of those advocating democracy in Myanmar, and that he would try to push for actions in the Taiwanese legislature to help Myanmar. Hung also referenced the common belief in Myanmar that the Chinese Communist Party (CCP) is backing the military regime there, stating that this was another reason why Taiwan should assist Burmese democracy activists.

Hung, formerly a left-wing environmental activist, was likely trying to make assisting Burmese more amenable as an idea to Taiwanese by referring to CCP involvement. The Tsai administration has not taken a particularly strong stance in support of the pro-democracy movement in Myanmar to date, except for urging that Taiwanese factories in Myanmar clearly label themselves as being Taiwanese to avoid being targeted by protesters that have set fire to Chinese-owned factories in Myanmar, lashing out at the perceived Chinese role in the protests. Some have criticized the Tsai administration for otherwise having said very little on the protests in Myanmar. 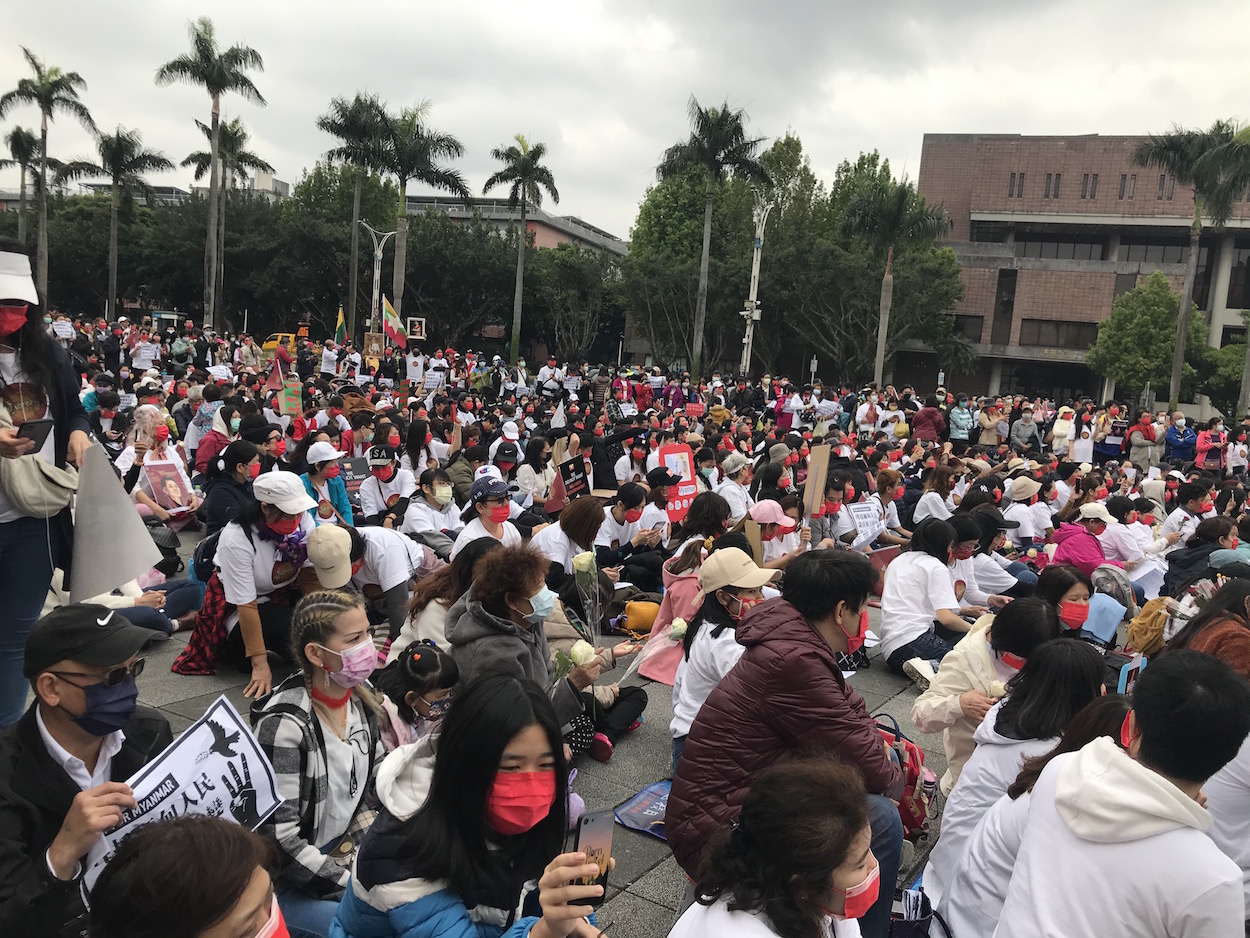 Taiwan Association for Human Rights (TAHR) secretary-general Shih Yi-shiang also spoke, emphasizing that Taiwan had also experienced a people’s struggle against authoritarianism for there to be democracy today. Shih stated that this is a reason why Taiwan should help Myanmar; to give back to others in need after having gone through similar experiences with authoritarianism. The TAHR is one of the key civil society organizations in Taiwan, with a history going back to Taiwan’s democracy movement.

Other speakers were representative of Hong Kong organizations in Taiwan, with a number of Hongkongers holding signs stating that they stood in support with Myanmar. Hong Kong speakers emphasized Hong Kong’s struggle for democracy alongside that of Myanmar as well as that Hong Kong, Myanmar, and Taiwan were fellow members of the Milk Tea Alliance. While the Milk Tea Alliance phenomenon originally centered around Hong Kong, Taiwan, and Thailand, with the eruption of pro-democracy protests in Myanmar, this has also led Myanmar to be included in the framing. 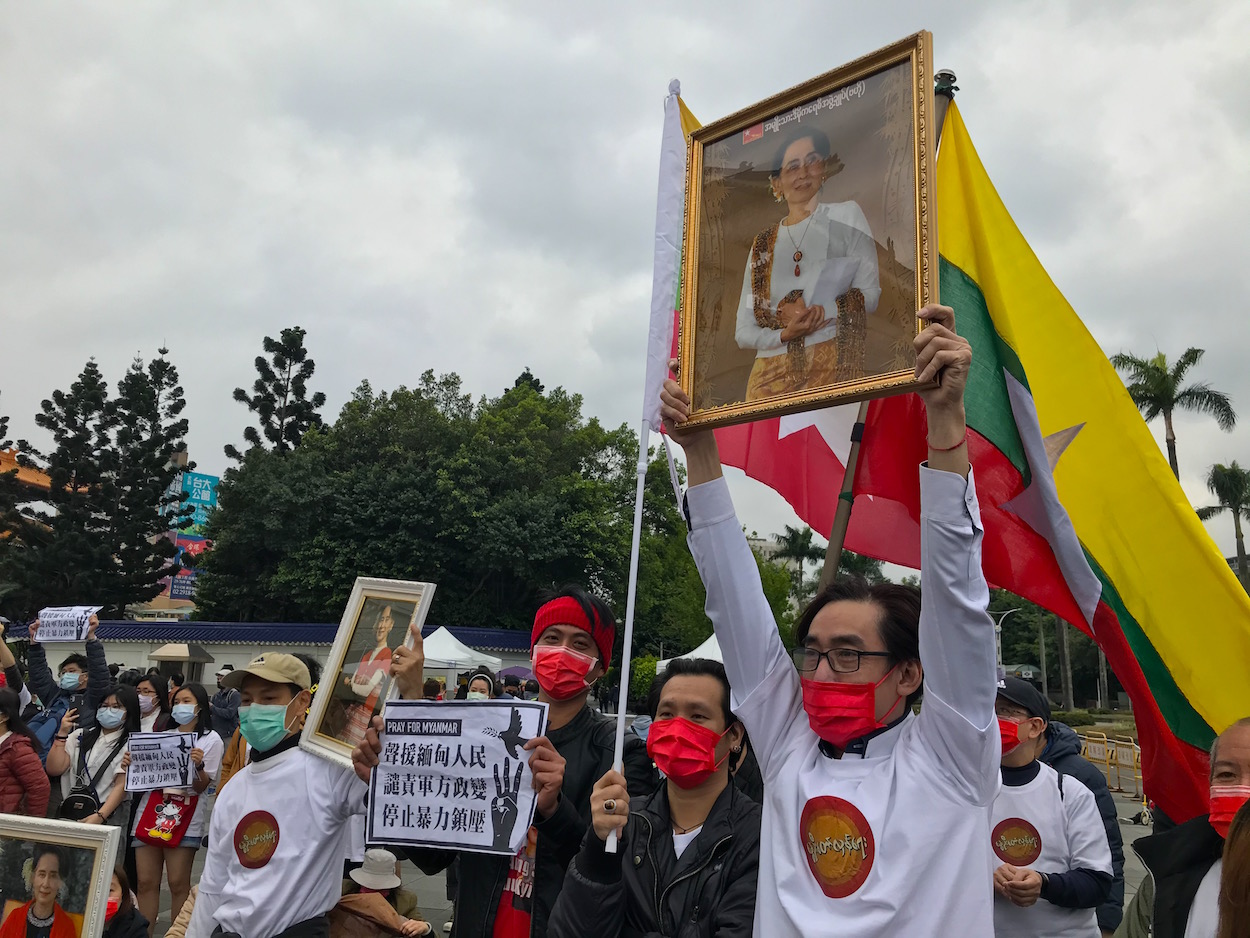 Burmese speakers included representatives of Burmese student organizations in Taiwan—consisting of Burmese students studying in Taiwan—and representatives of the Burmese diaspora permanently based in Taiwan. Burmese speakers emphasized their opposition to the authoritarianism of the military government in Myanmar, with military repression after the recent protests having left 236 dead as of this morning. Moreover, when asked by media in a press conference after the rally, Burmese speakers stated that with the wave of factory fires targeting Chinese-owned factories, this is opposition to the CCP and Chinese capital, not backlash against ethnic Han residents of Myanmar; again, one notes that many of the organizers of the rally today are ethnically Han. 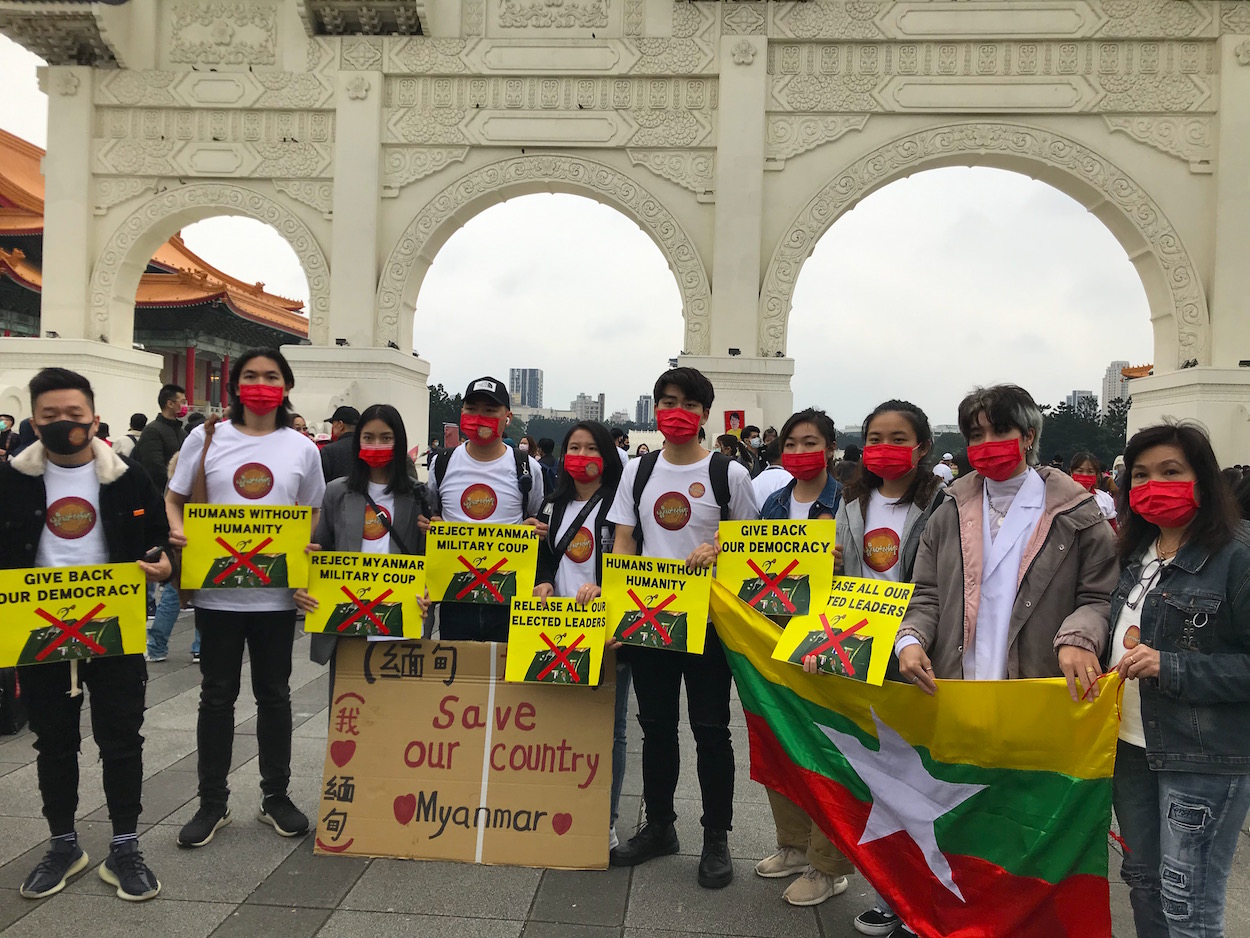 Future solidarity events include another rally that will take place at Liberty Plaza one week from now, organized by Burmese student groups. With pro-democracy protests having taken place across Asia in Hong Kong, Thailand, and Myanmar over the past year, one can observe that a wave of solidarity rallies have taken place in Taiwan, organized by members of the Hong Kong, Thai, or Burmese diasporas in Taiwan. It remains to be seen how these different diasporas could perhaps use Taiwan as a point of connection.