IMAGINE SITTING at the front line of an anti-coup protest, facing riot police with nothing but the clothes on your back and the words that you shout. Imagine not knowing whether your state was heading into civil war or massacre. For a decade you thought democratic reform was the answer to your country’s flawed political system but now realize that insurrections and coups have easily dismantled and impoverished your home and its values. You are fighting for something that is hard to believe yet still hold onto hope and each other. It takes courage in the face of terror and fear.

That is the reality in Myanmar, the reality that has been shared by many nations around the world throughout history. Not only is this not the first time that Myanmar has suffered under repressive military rule, deep-rooted poverty, and ethnic violence, but it probably won’t be the last.

The most recent military coup was anticipated, says Jasmine, a college student who returned to Myanmar to aid in the protests—not her real name. She told me that “due to the COVID situation, we all thought that the military would take over. People [had] a hunch. Not sure when or how, but they were going to claim power. Burma was gone.”

This is the experience faced by a generation. “Many people above 25 are financially struggling and people are not feeling safe. Lots of people who immigrated here now see the reality here.” The generation under 20 years old is taking initiative in a game they do not want to play: “Many […] do not find our reality shocking.”

After a violent crackdown on student protests, General Ne Win immediately ordered the months-long closure of universities and schools. “Soldiers are sitting in front of schools and people are getting injured in the middle of crossfire. I remember a bomb was shot off in front of a school, but thankfully there were no students inside,” Jasmine said. She and many others believe the education system in Myanmar will not run again until mid-2022. “There is nowhere for us to go.”

She returned to be a part of the movement, to fight alongside her family and friends. Many are tired of virtue-signaling from the West and lack of real support. The protestors have a lot to deal with when it comes to a broken political system that is unable to bear the weight of responsibility to build a true democracy after this chaos subsides.

In the seventy five years since World War II, it should be self-evident that the “liberal democratic order” is more like a mirage than a plausible reality. The ideals it instills, those “exalted” by the United States and revered by nations under its umbrella, are rarely ever implemented. .

Although a majority of the blame rests on the shoulders of those who overthrew the civilian government led by the National League for Democracy (NLD), the silence of the international community is striking. However, it does not excuse the NLD’s complicity on the genocide of the Rohingyas starting in 2016, trying to accomade itself to the military regime before the last coup. These issues cannot be wiped away by a single election, especially from a party that has failed before.

“You can cut all the flowers, but U can’t keep spring from coming.”

Now when I see that phrase plastered on the walls of Yangon and on signs in the streets of young protestors, I start to think. I begin to question who is responsible for cutting the roots of a movement: the instigator or the bystander?

In Myanmar, there has been no end to the six decades of systematic killings, ethnic cleansings, and insurrections that other humanitarian crises have dealt with and reconciled. Over past years of Myanmar’s history, generals have proven to be highly resistant to external pressures and are prepared to pay a high price in terms of the suffering of civilians to protect their view of Myanmar’s stability, sovereignty, and independence. There is no collective agreement, just brute force.

Responses by international society have been limited. According to Jasmine, she said, “The ICRC used to have a robust presence, but ever since the Rohingya genocide and military coup, there was a heavy strain” put on Myanmar’s relationship with the organization.

The only thing filling their minds and hearts is frustration. Protesters in Myanmar have called on the UN to invoke the R2P (Responsibility to Protect). Of course, they are simply people who want to win back their autonomy and freedom. But here lies the problem: a divide between what the people of Myanmar need and what the world is willing to offer. Hence although Myanmar’s people may hold out hope for international help, we all know none is coming anytime soon.

The situation in Myanmar is compounded by the COVID-19 pandemic. On July 9th, one Myanmar civilian shouted, “I live in Ward [redacted]. Where can I get an oxygen tank? I’m struggling to breathe. I still want to live.”

Myanmar is currently experiencing a deadly wave of COVID-19. Cases and death tolls have been underreported by the military, hospitals are at overcapacity and overwhelmed, and many patients must treat themselves at home while there is a severe oxygen shortage. Only around 2% of the population can go to private hospitals, and many are forced to turn down patients. Public hospitals are guarded by soldiers and are unsafe to access. Doctors report to military generals, not to any system of welfare.

Jasmine says that amidst all the chaos, “Diverting attention is how people are solving the COVID problem, because the military is useless and it only makes us stronger together.” That is to say, people are sticking together to survive by organizing mutual aid efforts on their own.

Efforts at mutual aid are rooted in the same networks active in protests. For instance, Jasmine says, doctors go through CDM (Civil Disobedience Movement) principles. “People who are working under the government or affiliated military companies are quitting their jobs and hoping that if they are not working the system will topple down.”

Doctors are in hiding as the junta hunts them down and the healthcare system has collapsed completely. The pandemic has not only become a weapon against people’s health but against their livelihoods. Citizens themselves are having to find ways to contact trace, test for COVID systems, and get their hands on vaccinations.

Even as the coronavirus pandemic sweeps across both hemispheres of the world, institutions founded decades ago fail to organize and implement coherent responses to a global crisis. In Myanmar, where society faces the reality of military rule, this has forced members of the public to take matters into their own hands.

Although the likelihood of another major outbreak of COVID-19 is close to inevitable with it being near impossible to collect any accurate data, the majority of people are more concerned with trying to get the military out of power rather than mitigate COVID risk.

Everyone has a role to play now. Whether that be spreading awareness through open dialogue, on social media using #WhatsHappeninginMyanmar, or listening to those who are on the inside, it is important to stand together in opposition to hateful events like this. 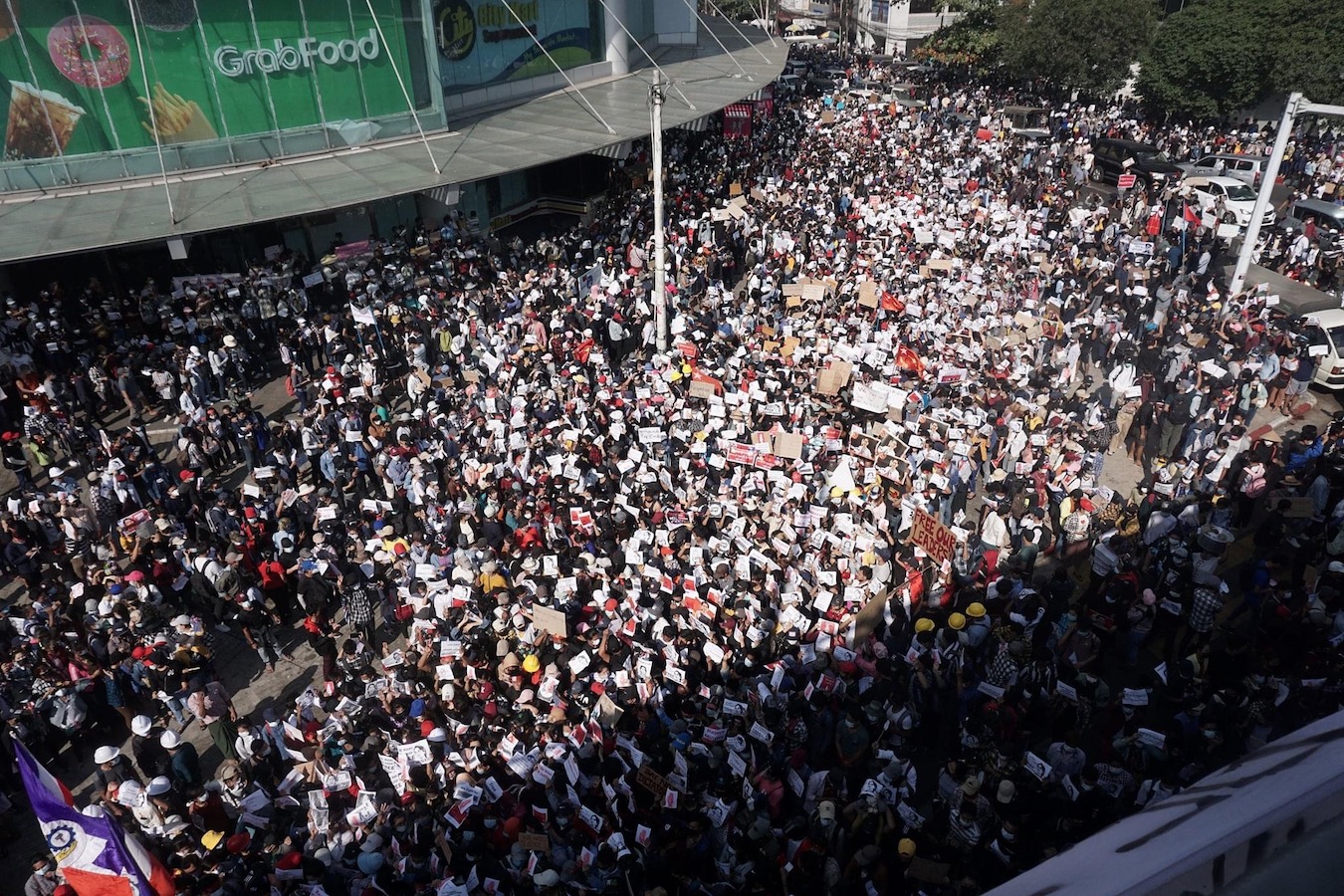 If the world is to become a better place after the horror of COVID-19 and violence across the globe, we cannot solely rely on governments, militaries, police forces, or officials to keep us safe and whole, but rather each other, our neighbors who we see everyday and those across the ocean who are not so unlike us. Everyone wants to be able to breathe.

Fear is vast, but limited. So while the coup may continue to cut the stems of these blooming flowers through cutting off access to the internet, tracking people down, starving children, and sexually assaulting women, these horrific events are seen and stir the pot of anger. And while the “liberal order” and Myanmar 2008 Constitution are dead in some ways, law continues to shape power. A spring of courage and resistance is coming: a community that demands an end to anarchy and false order. It is reaching a larger community more now than ever before.

The voice of dissent can be quieted, but the rumblings of change cannot be denied.