THE TAIWAN POSTAL Workers’ Union (TPWU or 台灣郵政產業工會) protested on Monday at Chunghwa Post’s Taipei headquarters, demonstrating against what they stated was an unfair system of pay within the company.

In particular, after planned pay raises, salaries for clerks at service counters would increase by 4,950 NT, while salaries for couriers would only increase 2,494 NT. More broadly, the union has pointed to unequal benefits, high salaries, and more bonuses for former government employees within the company, while workers recruited after Chunghwa Post transitioned from a government agency to a state-owned enterprise in 2003 receive less benefits. The TPWU has referred to this as the existence of “two systems” within the Chunghwa Post. 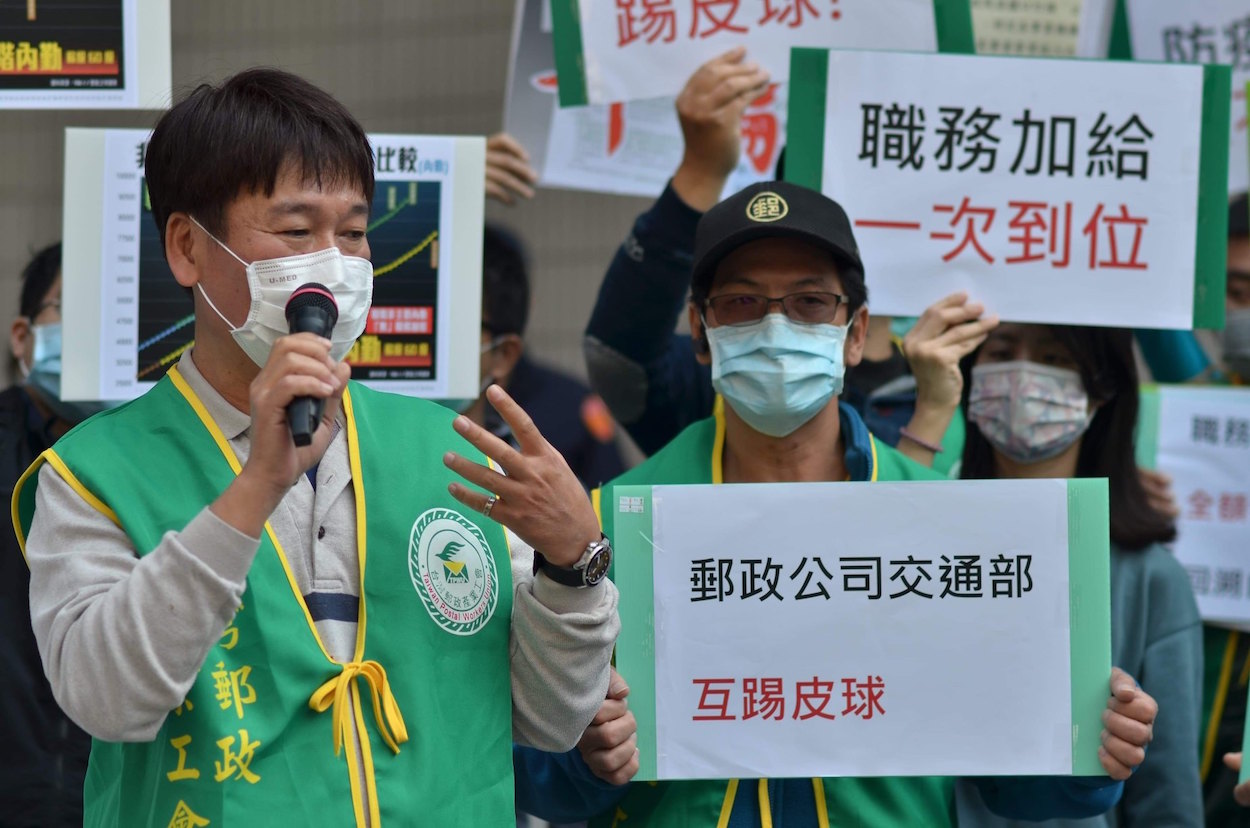 Photos from the demonstration on Monday. Photo credit: 台灣郵政產業工會/Facebook

Indeed, there are a number of Taiwanese companies that are formerly government-run, but which are now ostensibly privatized. Although many such companies are on paper in private hands, they often retain close ties to the government, or the government may be the majority stakeholder.

Labor issues within such companies often stem from this complicated relationship with the government. In the case of the Chunghwa Post, one notes that workers in the company that joined before 2003 received benefits akin to those received by civil servants, who along with teachers, members of the police, and members of the military, were granted economic privileges in return for political loyalty during the KMT authoritarian period, as a way to maintain their allegiance.

That being said, past years have seen efforts to reform this system of benefits, as with the Tsai administration’s pension reforms aimed at ensuring the pension system does not go bankrupt. It is not surprising that these efforts at reform have met with stiff resistance from those affected—one can situation labor contention within the Chunghwa Post in the same framework. To this extent, problems regarding undue benefits given to senior workers in companies and the exploitation of junior workers who do not receive equal benefits are long-standing in Taiwanese companies across the board. One expects the issue to be especially exacerbated when it comes to Chunghwa Post, formerly a government agency.

Indeed, with the uptick in labor militancy that Taiwan saw after the 2016 China Airlines strike, one saw increased labor activity in companies with close ties to the government; indeed, including companies that were spun out from the government, or in which the government is the majority stakeholder. This was the case for airlines including China Airlines and EVA Airlines, as well as toll workers, Taiwan Railways workers, telecom workers in the formerly state-run Chunghwa Telecom, and workers in the energy sector. Unsurprisingly, this was also the case with Chunghwa Post, with workers threatening to strike.

With its present activities, it is to be questioned whether the TPWU’s primary aims in its current labor actions would be to try to appeal to the central government to intercede. Historically, this appeal to the central government to resolve a labor dispute has been a common strategy of the labor movement in Taiwan, sometimes to its detriment. This is all the more likely to happen when labor activity takes place in companies with close ties to the government or in which the government is the majority stakeholder. 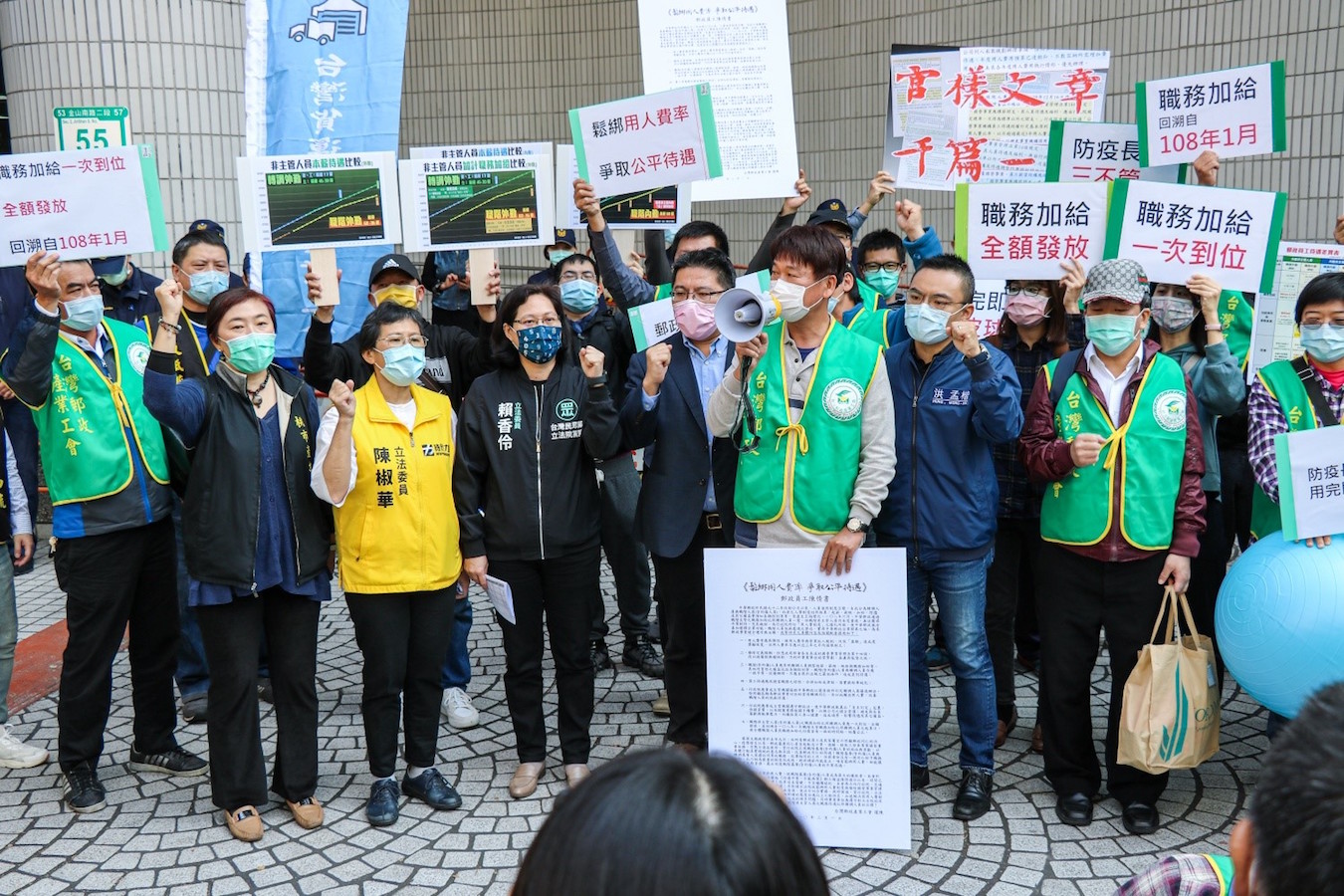 That being said, the character of Chunghwa Post as a company close to the government will likely also provide the template for union-busting efforts. The Chunghwa Post management is likely to depict discontented postal workers as privileged and enjoying benefits akin to those of civil servants, but simply seeking to gain even more benefits—and this at the public expense. Such accusations were levelled against striking China Airlines and EVA workers, citing their comparatively high salaries. Efforts were also made to turn different categories of airline workers against each other—such as turning flight attendants against pilots and mechanics—on the basis of their differing pay.

Given the impact of COVID-19 on mail services worldwide, it would also not be surprising if the management of Chunghwa Post also uses COVID-19 as a means to stigmatize the actions of postal workers, claiming that they should instead be willing to personally sacrifice for the sake of the company in these trying times.

This would not surprise. At the same time, if Chunghwa Post workers are successful in getting their demands met, this may be encouraging of labor activity in other companies close to the government. It is to be seen whether this will take place.