ON CHRISTMAS DAY 2020, after much contention, the lifting of limits on American pork imports was passed by the Legislative Yuan, with KMT lawmakers vowing to continue to oppose pork imports, possibly by way of referendum. More broadly speaking, media coverage and political discussions around the issue of ractopamine and American pork imports to Taiwan have reached the point of absurdity in past weeks.

Some of the absurdities include the KMT lawmakers dumping pig organs in Legislative Yuan, a doctor claiming fruit fly testing can directly apply to humans, and the government charging the same doctor with violating the Act Governing Food Safety and Sanitation with his claims. Absurdities aside, discussions around pork imports to Taiwan is quite illustrative of how public discourse can be hijacked in the service of capitalism.

Both the DPP and KMT have proven hypocritical on the issue, having switched their positions on this issue of American pork imports in past years. However, the fourth estate is also quite complicit in their hypocrisy. The media does this with its exclusive focus on ractopamine and its unwillingness to bring in other perspectives as part of the discourse around the issue—for example, vegetarians are a sizable minority in Taiwan, constituting an estimated 13% of the Taiwanese population. Moreover, serious discussion regarding public health implications of pork import and examination of animal agriculture is completely absent in media coverage as well. 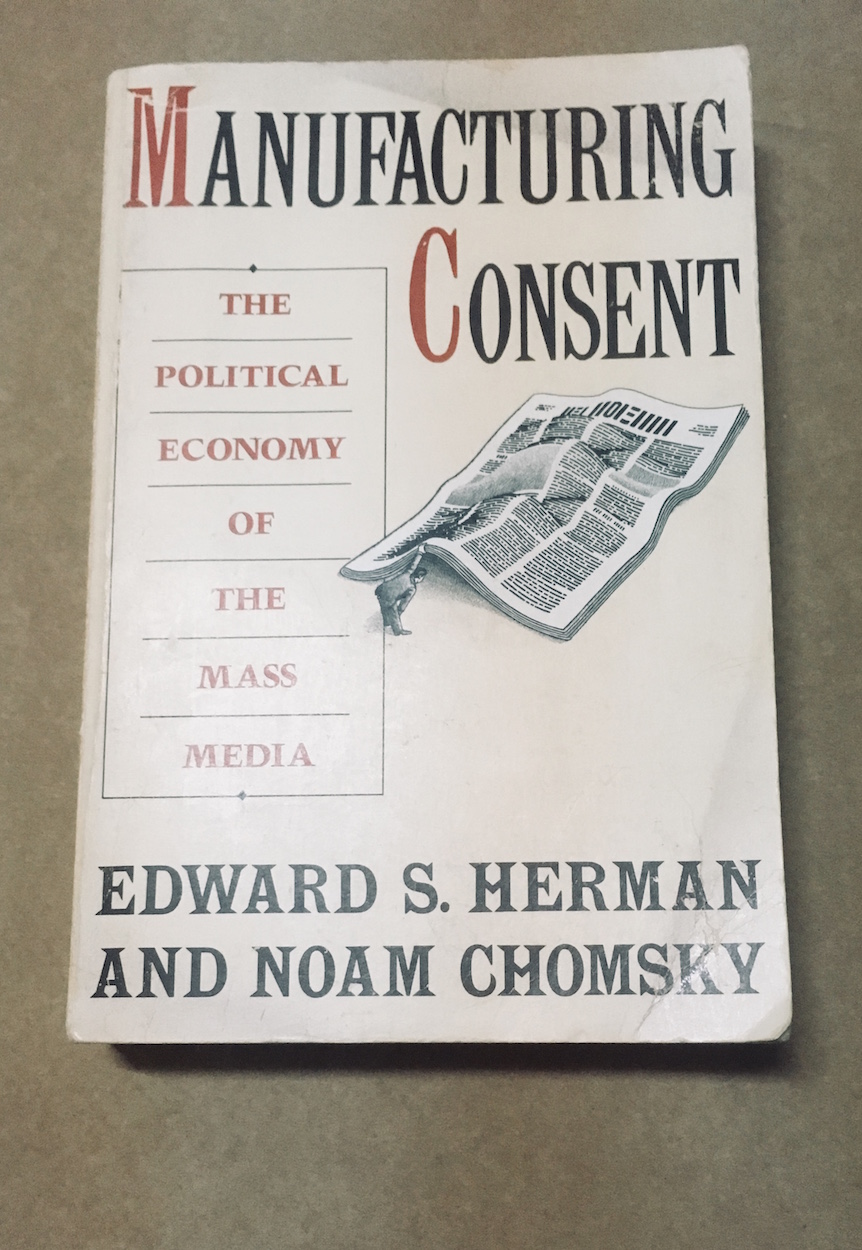 In 1988, Noam Chomsky, along with Ed Herman, wrote the book Manufacturing Consent to illustrate how propaganda works in a capitalist state. The propaganda model Manufacturing Consent laid out has filters that restrict the discourses allowed in the media. In 1996, to clarify and update his model of how propaganda works, Chomsky, made this often-quoted statement in a response to this question: ”Toward the end of Manufacturing Consent, you conclude that ‘the societal purpose of the media is to…defend the economic, social and political agenda of privileged groups that dominate the domestic society and the state.’ Anything you’d want to add to that?”

Chomsky responded: “The smart way to keep people passive and obedient is to strictly limit the spectrum of acceptable opinion, but allow very lively debate within that spectrum—even encourage the more critical and dissident views. That gives people the sense that there’s free thinking going on, while all the time the presuppositions of the system are being reinforced by the limits put on the range of the debate.”

There are obvious reasons for the media, as profit-making organizations, to avoid serious discussions of the ractopamine pork issue, as their advertisers will not allow it—both for-profit news and advertisers are two of the filters mentioned in Manufacturing Consent. For example, since many advertisements promote meat, it would be detrimental to media companies’ profits for television stations to interview a nutritionist or a health expert about the consumption of processed meat and red meat in relation to cancer and many other diseases, based on the uncontroversial facts as listed on the website of the Ministry of Health and Welfare.

This propaganda model works in terms of safeguarding the interests of not only animal agriculture but also the pharmaceutical industry. The absence of serious discussions about pork and public health, for example, has serious consequences, as the consumption of red meat increases the risk of diseases that are nine out of top ten causes of death in Taiwan. In not having such discussions, the media failed in terms of informing the public and giving consumers the best possible information to make choices. Meanwhile, the animal-medical industrial complex stands to gain tremendous profits in its sales of meat and “cures” for chronic diseases that are made much more likely by the consumption of pork. This is not to mention how the other industries also stand to gain great profits from such an arrangement—oil to transport and keep meat fresh, delivering services, non-animal agriculture to produce animal feed, etc.

What the media also keeps out, of course, is the suffering of animals and environmental destruction. Within the confines of the debate, news would gladly interview a local hog farmer’s opposition to American pork imports but, at the same time, never show actual footage of pigs suffering. The media would show delicious pork dishes, but as observed by Carol Adams, will always keep the referent (i.e. the actual animals who have to suffer and be slaughtered) absent. The environmental impacts of animal agriculture, kept away from viewers like you, include extreme land and freshwater usage, an estimated 87% of climate change contribution, and water pollution. Keeping such serious discussions in academic and professional settings and never in the media is extremely important to the powers that be, as democratic scrutiny poses existential dangers for industries.

In the field of public policy, there is the concept of the Overton Window, which is quite similar to Chomsky’s description of how discourses are limited in the media. The “window” is an opening, or an opportunity for public policy, that conforms to public opinion. Joseph P. Overton devised the concept, as a libertarian think-tank executive. He used the metaphor to advocate pushing the window from what would be previously unimaginable to actual policies, with the aim of pushing forward undemocratic policies that would otherwise be unpopular with the public. Over time, however, the meaning and use of the Overton Window was adopted in the field of political science to describe shifting political constraints. 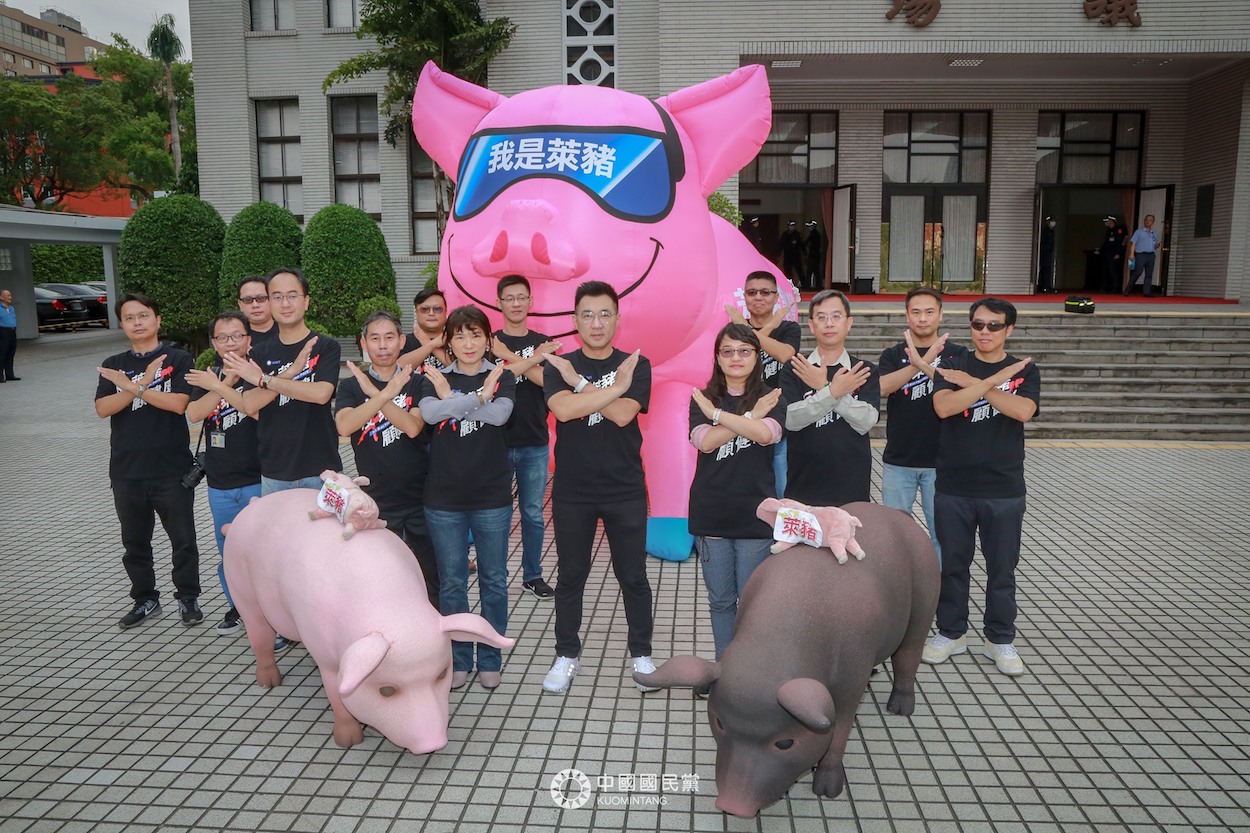 The Overton Window, in this case, looks quite cemented and unmoving. Not only is there powerful corporate interest, but the sizable meat-eating public is also a force that can prevent a minority view. So what exactly, can we see, if we look through the Overton Window, with the assumption that this window will not move? We can deduce that meat consumption will increase, in the absence of serious discussion to curtail meat consumption. And once American pork imports start flooding the market, it will drive down the price, and consumption will rise. The implication for public health means more chronic diseases and more medical expenditures that will burden the already taxed healthcare system in Taiwan. Through this window, we can see extreme violence, as it is estimated more than 77 billion land animals are slaughtered annually to satisfy human gluttony. Finally, if we look far enough, we will see how environmental destruction, especially climate change, proves a threat to all species on the planet.

Although Manufacturing Consent offers a useful propaganda model to analyze the media landscape, it does not deal with the problem when the contents of the propaganda take root, and false consciousness becomes a self-enforcing everyday reality. In other words, we can be convinced that the purpose of life is to consume as much as possible, to the point that we self-censor any thoughts against the idea that consumption is unnatural. Here, I’d like to suggest that the Overton Window will not stay cemented, as an ideology, however powerful, loses its power over time. History is transient, and so is our current mode of living.

Once the problems associated with meat and its related industrial complexes become more and more apparent, the propaganda machine, however powerful, will not be able to hide the truth, especially when we can clearly see the problems that are all around us. Only when the Overton Window moves to the point where we can start solving some of these problems can we look through the window to find solutions. When we look through the glass, at first, we do not see clearly. Will we eventually see our inner Icarus in our reflection and understand that, in order to save ourselves, we must have faith, hope, and love; with love for the world and all its creatures being the most important?