OUTRAGE HAS broken out from civil society groups after today’s ruling by the Criminal Court of the Taiwan High Court regarding the “324” attempted occupation of the Executive Yuan in March 2014. The ruling found sixteen guilty of charges connected to the attempted occupation. This was the second ruling on the case, which can be appealed. What seems to have hit a nerve is that previous not guilty verdicts were overturned and that participants were charged for a protest action that took place more than six years ago.

The attempted occupation of the Executive Yuan was one of the key events of the 2014 Sunflower Movement, a movement that centered around the youth-led monthlong occupation of the Legislative Yuan in demonstration of the CSSTA trade agreement. The CSSTA was a free trade agreement with China that the KMT Ma administration sought to pass into law, which would have allowed for Chinese investment in Taiwan’s service sector industry. It was feared that the CSSTA would have proved deleterious to Taiwan’s democratic freedoms. Civil society groups were also angered by the Ma administration’s circumvention of oversight procedures to pass the bill. 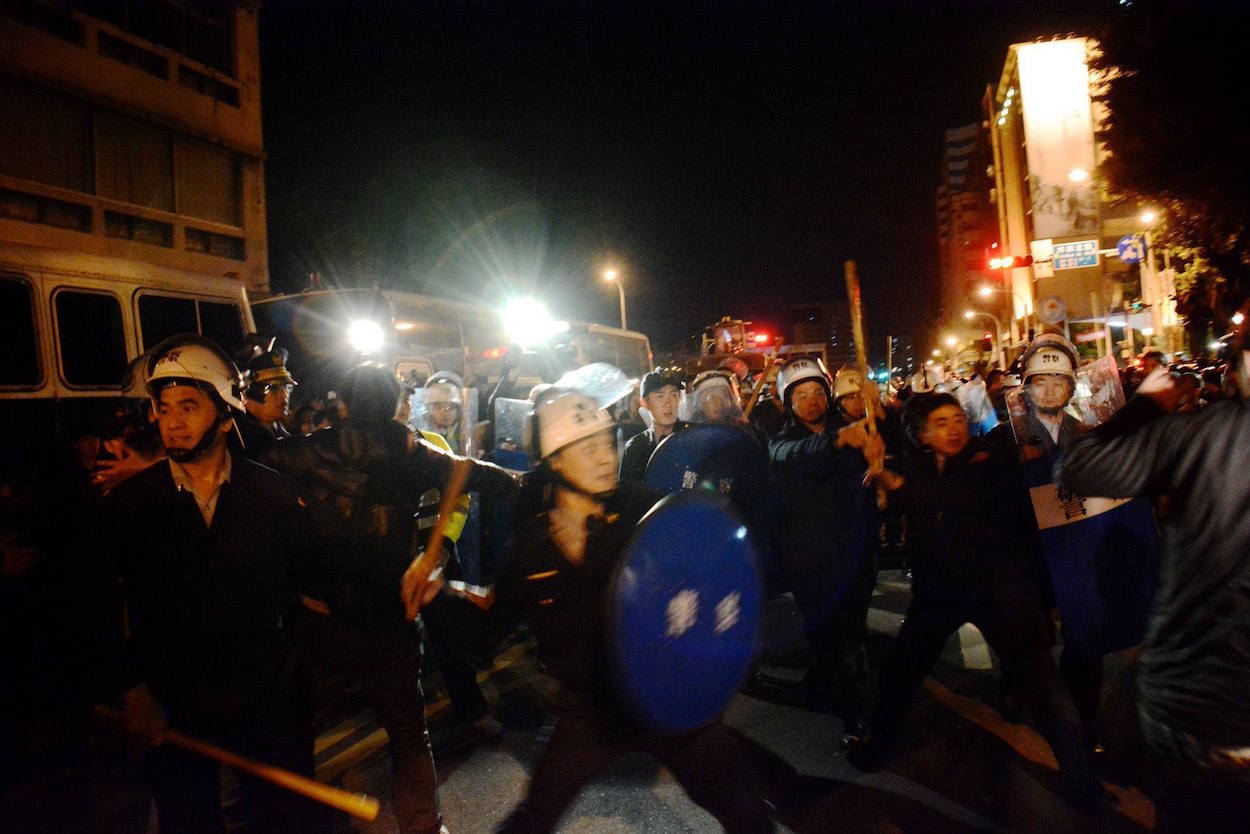 Riot police during the night of “324.” Photo credit: MrWiki321/WikiCommons/CC

The “324” occupation of the Executive Yuan—named such because it took place on the night of March 23rd and early morning hours of March 24th—was a controversial event during the movement. The attempt to occupy the Executive Yuan was an effort at escalation through occupying another branch of government, seeing as there had been few responses from the Ma administration one week after the occupation of the Legislative Yuan. At the same time, some took the view that seeking to occupy another branch of government was too radical an action by the student demonstrators, resulting in controversies about whether the action was justified.

But individuals who attempted to occupy the Executive Yuan were violently evicted by police. This involved one of the few times since the end of martial law that water cannons were fired upon political demonstrators. The Executive Yuan incident very likely saw the highest level of police violence against demonstrators during the Sunflower Movement.

An April 2017 ruling found eleven guilty and ten not guilty out of these 21 individuals. Today’s ruling, however, overturns the previous ruling, finding a total of sixteen people guilty. This includes prominent activists such as Wei Yang and Chen Ting-hao, who may now face jail time.

Prominent Sunflower Movement activists such as Lin Fei-fan and Aman Wu, who both took up high-ranking positions in the DPP as the deputy secretary-general and director of the department of youth organization for 2020 elections, were both present to offer support during the ruling today.

Key Sunflower Movement leaders such as Lin Fei-fan and Chen Wei-ting wrote on social media criticizing the ruling. The New Power Party, which was formed by youth activists after the Sunflower Movement, civil society organizations such as the Judicial Reform Foundation, as well as activists that later became politicians such as independent legislator Freddy Lim and DPP legislator Lai Pin-yu, were also critical. By contrast, KMT politician Jiang Yi-huah—who was premier during 324 and presided over the police crackdown—praised the ruling on social media, defending police actions and claiming that the Sunflower Movement was not a case of justified civil disobedience.

Statement by Lin Fei-fan, who was one of the main student leaders during the Sunflower Movement and took up a post as the DPP’s deputy secretary-general during 2020 election campaigning, on the ruling

Such groups have called attention to the fact participants in the Sunflower Movement sought to defend Taiwan’s democratic freedoms using their free right to assemble and to conduct political protests. Such groups also highlighted that Taiwan is a former authoritarian country with a history of state violence against demonstrators and that the ruling justifies state violence. This is not only with regard to the “324” attempted occupation of the Executive Yuan but also the “318” occupation of the Legislative Yuan, and events which took place after the end of the Sunflower Movement, such as water cannons being fired on anti-nuclear demonstrators on Zhongxiao West Road on the night of April 27th, 2014.

It was originally thought that judges had decided to take a lax approach to charges against former Sunflower Movement activists, with charges against individuals that had participated in the occupation of the Legislative Yuan dropped in view of their actions as justified civil disobedience. Nevertheless, it is clear that the judicial system has taken a different view of participants in the attempted occupation of the Executive Yuan. It may not be surprising to note that the legal treatment of famous and lesser-known protesters can vary in the eyes of the Taiwanese judicial system.

It remains to be seen if the defendants will seek to appeal the ruling, as well as what responses from Taiwanese society at large will be.