There have been no changes in the Banqiao kindergarten cluster, though all new results from genetic variant testing of the already known cases resulted in Delta cases. A middle schooler in Songshan was found to have the Alpha variant, meaning that he is not linked to the Banqiao kindergarten cluster, and had a high Ct value, which could indicate that this is an older case. Their family members tested negative and 920 tests in connection to this case have returned 904 negative test results, with 16 tests still being processed. The wife of the renovator working in the apartment complex that the Banqiao kindergarten cluster spread to has been found to have the Delta variant. No new cases were added to the Taoyuan pilots cluster, with all pilots having tested negative, and all of their contacts having tested negative, meaning that the situation seems to be under control. 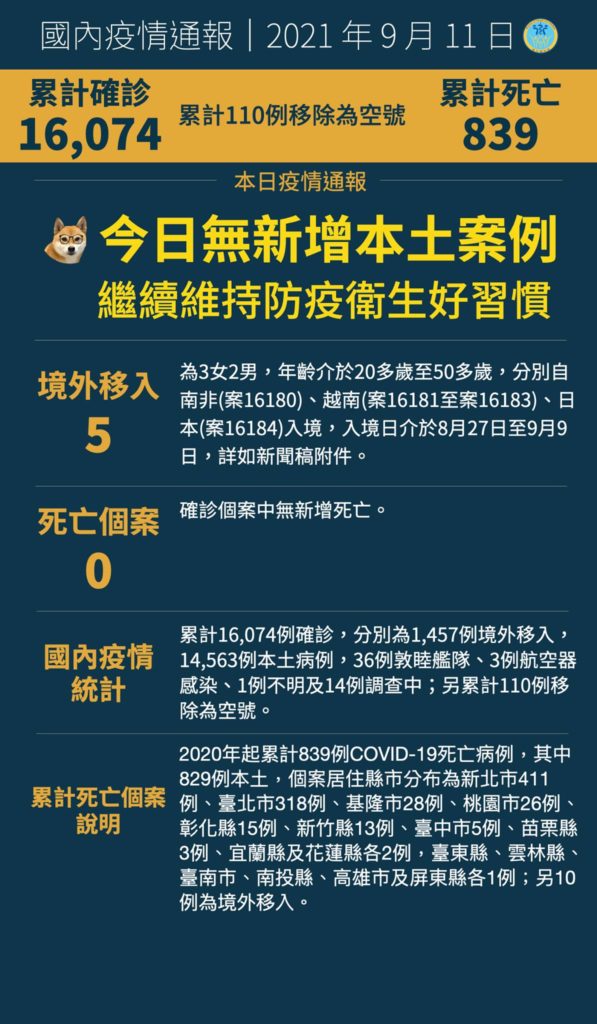 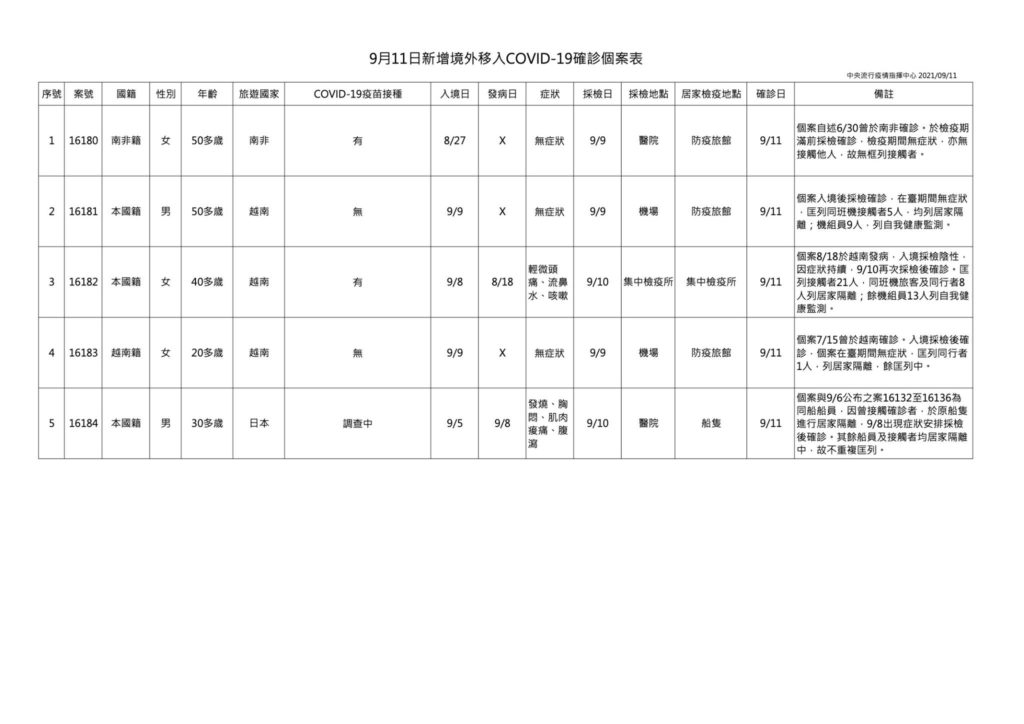 Close to 3,000 contacts have been listed in connection with the cluster, with 2,001 negative test results and 961 tests being processed, 765 on self-health management, and 59 asked to monitor their health. According to Minister of Health and Welfare Chen Shih-chung, the outlook for the Banqiao cluster is positive, seeing as 2/3rds of tests have been processed and were all negative, but a clearer assessment will be known once all test results are in.

There have not been measures taken to clear and quarantine the apartment building in Tucheng that a kindergarten teacher from the Banqiao cluster is living in because no COVID-19 cases were found among residents there outside of individuals living in the same apartment.

Three schools in New Taipei have been closed as a precautionary measure for contacts. Schools that violate COVID-19 measures and hold screenings or other events will be fined more than 60,000 NT.

Taipei mayor Ko Wen-je claims that the Songshan case will be used to trial specific measures taken for COVID-19 cases; as this case is now thought to be an older case, their second-layer contacts will be released from quarantine. Ko claimed that this is preferable to blanket measures such as shutting down indoor dining, as was done in New Taipei in response to the Delta variant cluster in Banqiao.

Individuals on the same flight as an Egyptian man who is part of the Banqiao cluster have been tested while in quarantine, seeing as like other inbound travelers they are quarantined and tested. Two relatives of this man had two high Ct values for genetic variant testing. The man in question has reacted against media and the public digging up information on him, including what floor he lives on. The CECC has called on the public to respect his privacy, as well as to not rampantly speculate that he is the index case for the Banqiao public.

Vaccinations for students 12 to 17 outside schools will start on September 14th, though many are expected to be vaccinated in schools going forward. According to New Taipei, if vaccines are sent out on time on September 22nd, vaccination should take place on schedule.

325,041 vaccinations took place yesterday, bringing Taiwan to 47.99% vaccination coverage, which is 52.41 doses per 100 people. This is the second-highest number of vaccinations in one day, with more than 330,000 vaccination on July 26th.

With many at ten weeks after their first dose of Moderna, the CECC stated that the Advisory Committee on Immunization Practices had discussed the possibility of mixing vaccines. There is insufficient international information about mixing vaccines with a first dose Moderna vaccine, however, and more information has been requested for review. 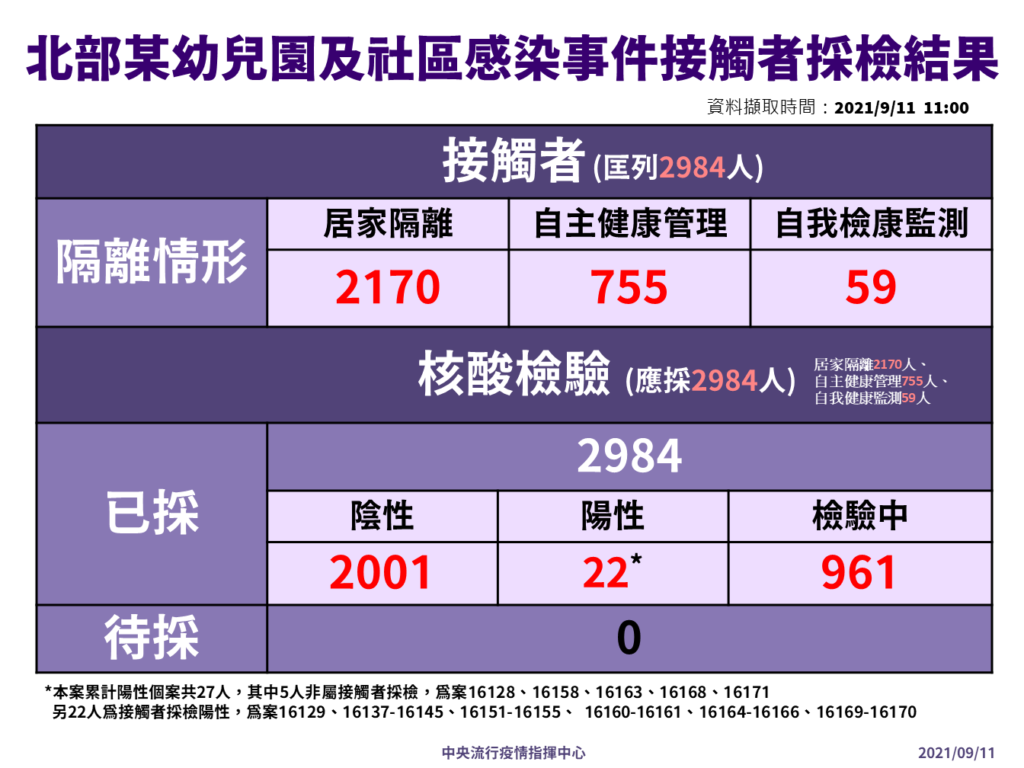 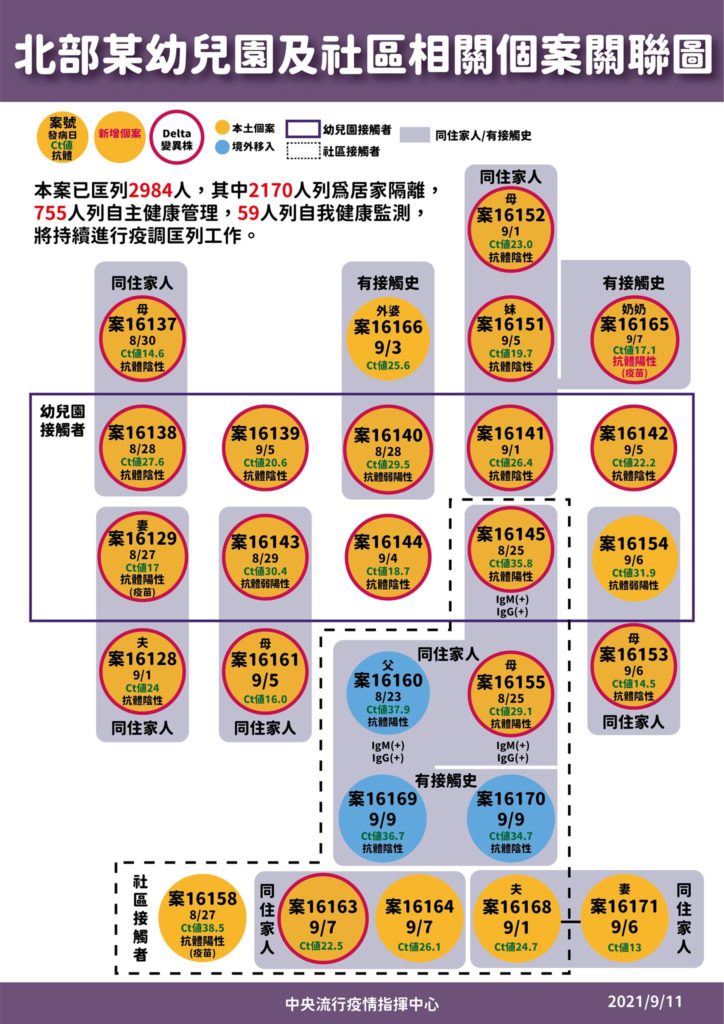 The CECC was asked about Singapore first extending quarantine periods to twenty-one days, bringing this back down to fourteen days, and reducing this to ten days as a response to the Delta variant. The CECC is keeping its eyes on adjusting measures when needed.

When asked about the possibility of news anchors no longer wearing masks, Chen stated that he did not particularly believe it was an issue if proper social distancing was maintained, but stated that mask-wearing is still required outside of the home, and that anchors can set an example for society to follow with their actions.