“My tears and my cries, you treat as the passing wind—my salary you take as your paradise” 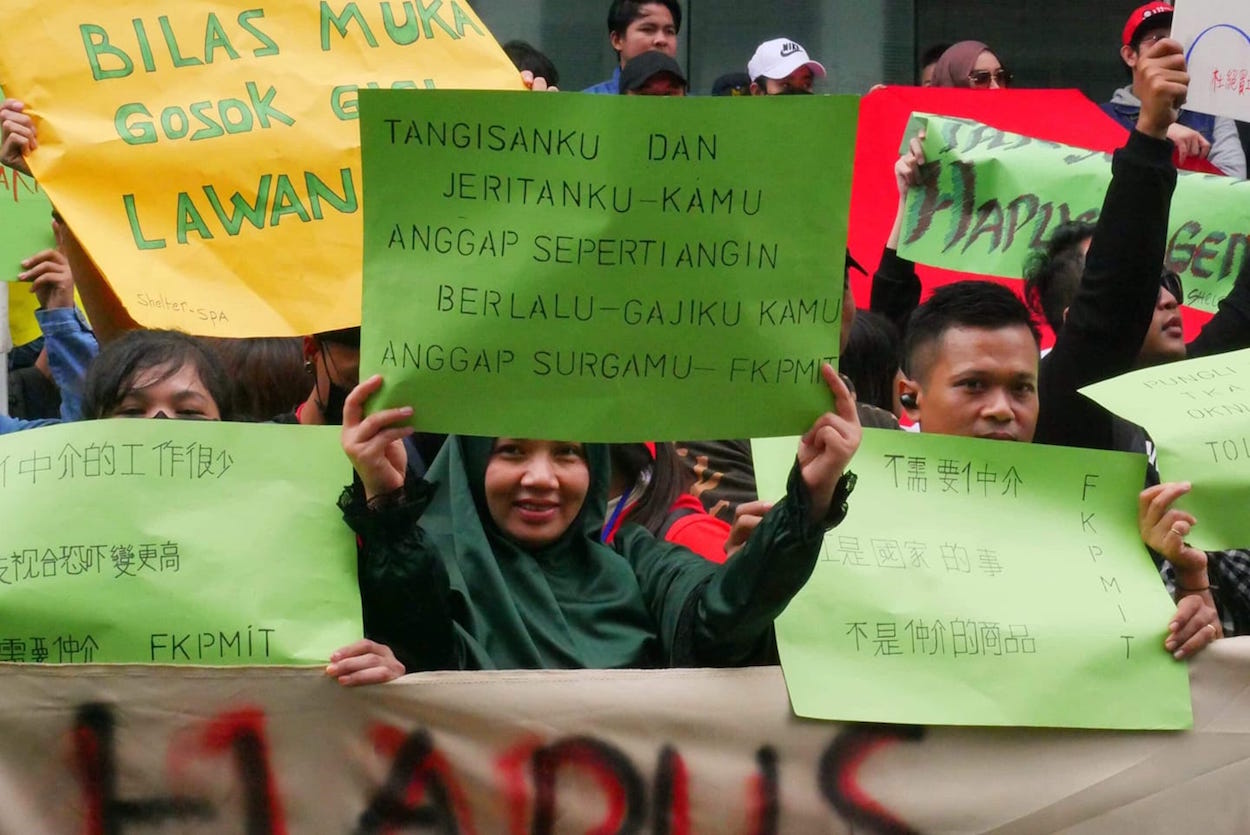 Although information on profit margins is difficult to come by, all signs indicate that labor brokerage is an exceedingly lucrative venture. Broker agencies charge migrant workers between NT$60,000 (US$2,000) to NT$200,000 (US$7,000) for signing a three-year employment contract depending on country of origin and job type. On top of placement fees, labor brokers extort monthly fees of between NT$1,500 (US$50) to NT$1,800 (US$60) for the duration of the contract. These fees are nominally levied for services rendered, but are often wildly disproportionate to costs incurred. Amendments to Article 54 of the Employment Service Act enacted in 2016 eliminated the requirement that migrant workers leave the country at the end of each three-year contract. Brokers had previously charged migrant workers an additional placement fee of NT$80,000 (US$2,600) to NT$80,000 (US$4,800) for contract renewal. Although the 2016 amendments were intended to end the practice of charging exorbitant fees to renew employment contracts, labor brokers continue to use various means of coercion to pocket “job-buying fees” (買工費) of NT$40,000 (US$1,300) to NT$70,000 (US$2,300). Unscrupulous labor brokers are also known to squeeze even more profit from migrant workers through practices such as deducting for labor insurance without actually enrolling migrant workers in the program, or taking massive cuts from compensation paid to the families of migrant workers killed on the job.

The requirement that labor broker agencies put down a deposit bond of NT$3 million both limits the pool of potential labor brokers and increases pressure to treat labor brokerage as a profit-oriented venture. It is therefore unsurprising that the heads of labor brokerage agencies are predominantly drawn from members of the ruling class with deep political connections and easy access to financial assets. The power of these labor brokers within government institutions and civil society blurs the boundaries between legality and illegality in the exploitation and abuse of migrant workers employed through labor intermediaries. Labor brokerage agencies routinely engage in illegal and quasi-legal activities. Among the most common forms of agency malfeasance are charging exorbitant and arbitrary fees, withholding legal documents, restricting freedom of movement, and threatening deportation as a disciplining mechanism.

Yet the Taiwanese Ministry of Labor (MoL) responded to the protests by washing its hands of any responsibility for upholding this predatory system of labor brokerage. After acknowledging protesters’ demands, the MoL claimed that it was powerless to do anything in the face of the free market. Workforce Development Agency section chief Hsueh Chien-chung (薛鑑忠) pointed out that mechanisms for direct hiring are already in place, but employers prefer to hire through broker agencies because of convenience. According to Hsueh, employers’ preference stems from the ability to pawn off paperwork, screening, and handling of problems with workers to labor brokers.

The MoL’s deference to the free market is consistent with the government’s goal of treating Southeast Asian migrant workers employed through the guest worker program as cheap and disciplined labor power. The state initially authorized employers in the construction industry to recruit Thai workers in the late 1980s before expanding the guest worker program to include workers from other Southeast Asian countries and low-waged industries in the early 1990s. The state modeled the guest worker program after Singapore’s system wherein migrant workers are restricted to temporary labor contracts, denied political rights and social protections, and prevented from permanent settlement. Modern guest worker programs in general, and Taiwan’s in particular, are stark manifestations of Swiss playwright and novelist Max Frisch’s oft-quoted phrase, “We wanted workers, but we got people instead.”

The state seeks to reduce migrant workers to objects of economic development through institutionalized forms of unfreedom justified through processes of racialization. Migrant workers from Southeast Asian countries have gradually replaced indigenous and Chinese workers in ‘5-D’ –devalued, dirty, dangerous, difficult, and degrading–jobs. These latter groups are subjected to similar processes of “othering.” In particular, multiple interacting forms of discrimination operate to restrict the freedoms, rights, and access to the distribution of social wealth for members of “othered” social groupings. Limiting migrant workers to particular labor markets has guaranteed that the reorganization of capital-labor relations in manufacturing, construction, and fishing/agriculture has depended heavily on this process. In similar fashion, the import of cheap and politically repressed labor has been at the crux of the rapid growth of commodified domestic care work in the twenty-first century.

The historical development of the MoL’s policies concerning migrant workers abides by Frederick Douglass’s axiom that “power concedes nothing without a demand.” It has taken decades of tireless advocacy, campaigning, outreach, and struggle to wrest concessions from the Taiwanese state and capital. Examples include translation services, a 24/7 hotline dedicated to serving migrant workers, the elimination of a requirement that migrant workers leave the country every three years, and basic labor rights such as the freedom of association. Still, most migrant workers are excluded from the Labor Standards Law and are rendered into a state of existential vulnerability through the ever-looming threat of deportation, a condition of domination that Nicholas de Genova conceptualizes as “deportability.”

Migrant labor struggles show that the private brokerage system is decidedly not a natural outgrowth of the free market for labor as depicted by MoL representatives, but rather a politically constructed social phenomenon. The MoL’s refusal to support migrant labor against Taiwanese capital invested in labor brokerage agencies is indicative of the state’s deeply compromised position vis-à-vis low-waged migrant workers from Southeast Asia. While the MoL’s official position is that labor brokers are simply market actors providing an intermediary service of matching workers with employers, a cursory investigation of social relations and practices belies this fantasy.

A member of elected leadership of the Su’ao District Fishermen’s Association, “A-Giu,” for instance, owns a large brokerage firm in Yilan County. In addition to migrant labor brokerage, A-Giu is heavily involved in the commercial fishing industry, employing migrant workers on fishing vessels and in a canning factory. In 2014, prosecutors charged A-Giu with collusion to manipulate labor brokerage fees in violation of the Fair Trade Act for gathering together labor brokers to propose a standard industry price. The proposed price, of course, would have been set at the maximum legal limit.

In 2013, local fishermen’s associations in northern Taiwan, including the Su’ao District Fishermen’s Association, agreed to prohibit purse seiners, large fishing vessels often weighing over 100 gross tons, from operating in June in an effort to address the rapid depletion of fishing stocks. A-Giu arranged for migrant workers employed on one of his purse seiners docked in Keelung to take temporary jobs constructing a shipbuilding plant. The factory owner agreed to employ some, but not all, of the migrant workers. Despite being legally entitled to their original salaries, only those migrant workers employed by the factory owner received compensation. Moreover, A-Giu paid migrant workers an hourly wage despite receiving monthly salaries from the factory owner unbeknownst to the latter.

It is in this socio-political terrain in which recent attacks against the YMFU should be situated. The most hostile leaders of the assault against the YMFU, such as Chairman Cai Yuanlong of the Su’ao District Fishermen’s Association, are not simply employers of migrant workers but are deeply embedded within institutional power structures. The upshot is that the forces aligned against the YMFU are not acting purely out of material interest, but are no less fundamentally concerned with securing relations of domination and control.

Such a perspective provides a better framework for explaining the involvement of the Labor Affairs Department of Yilan County in suppressing the YMFU. On October 18th, Director Wu Chi-Hung led a group to visit the President of the YMFU at his workplace. The visit occurred in the context of ongoing employer and labor broker pressure on the president to leave the YMFU and encourage fellow Indonesian migrant fishermen to denounce the union. The Control Yuan is currently investigating the leadership of the Labor Affairs Department of Yilan County for dereliction of duty as a result of this visit.

The apparent complicity of the Labor Affairs Department in suppressing union activity is reprehensible but unsurprising. Director Wu Chi-Hung was appointed by interim County Magistrate Chen Jin-de (陳金德) as part of a strategy to stack local government offices with partisans prior to the 2018 elections. The selection of Wu to head the labor affairs department is all the more disconcerting because of his background. Wu received a Master’s Degree from the National Ilan University Graduate Institute of Management in 2011, writing his thesis on “Key human capital indicators of local government.” Prior to his appointment as director of labor affairs, Wu served in administrative positions within the Yilan County Government. 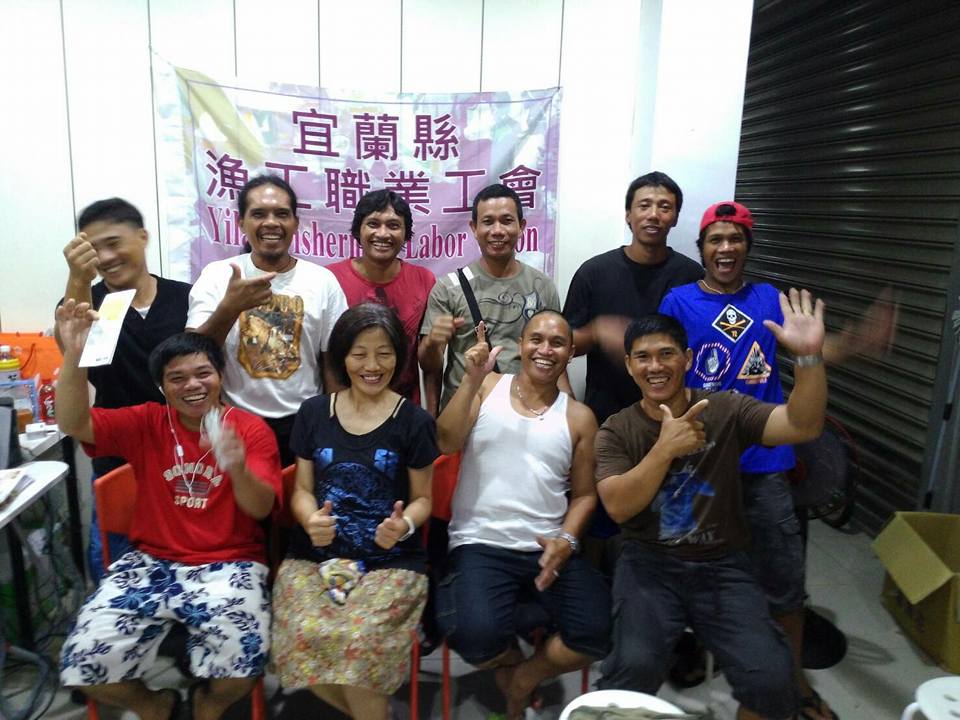 According to Secretary-General Allison Lee of the YMFU, the Labor Affairs Department of Yilan County has routinely obstructed the union by finding ways to delay authorizing election outcomes and creating catch-22 situations by refusing to investigate worker complaints without evidence. Bending to the will of local power brokers at the expense of workers is unremarkable given the context of Director Wu’s appointment and his political orientation. The power dynamics at play were apparent at a recent session of the Yilan County Council, with former Deputy Speaker Lin Chi-shan (林棋山) pointedly asking Director Wu what he planned to do about the YMFU. Meanwhile, county councilors have formed a working group tasked with investigating the influence of the YMFU on society.

The sordid power relations coalescing in the guest worker program dissolve the boundaries between public and private actors. State institutions nominally tasked with acting on behalf of marginalized groups, such as the Labor Affairs Department of Yilan County, end up suppressing those very groups in the interests of perpetuating relations of exploitation, discrimination, and domination. Meanwhile, whether due to deference to local power brokers or direct complicity, local police forces and social welfare offices have also been known to perform perfunctory investigations or even contact labor brokers to “pick up” migrant workers when the latter seeks redress for illegal mistreatment.

While it might be easy to dismiss the story of A-Giu as an exceptional case, the essential point to take away is that private labor broker agencies are not instrumental market actors, but rather exercise tremendous political and social power. As such, the MoL’s cries of helplessness in the face of market forces ring hollow. Indeed, the MoL’s parroting of economistic ideologies regarding the guest worker program is a testament to the state’s disavowal of any responsibility toward racialized workers. Moreover, the weight of evidence to the contrary suggests that, rather than an anomalous case, the above anecdote will feel all too familiar for migrant workers confronting intertwining forms of political, social, and economic power in the guest worker program.