MORE THAN 200,000 participated in this year’s Taiwan LGBT Pride today, according to organizers. This makes today’s march—the 17th iteration of the annual pride parade—the largest ever in the history of the event. Last year’s pride parade drew 130,000, meaning that attendance has nearly doubled between this year and last year. 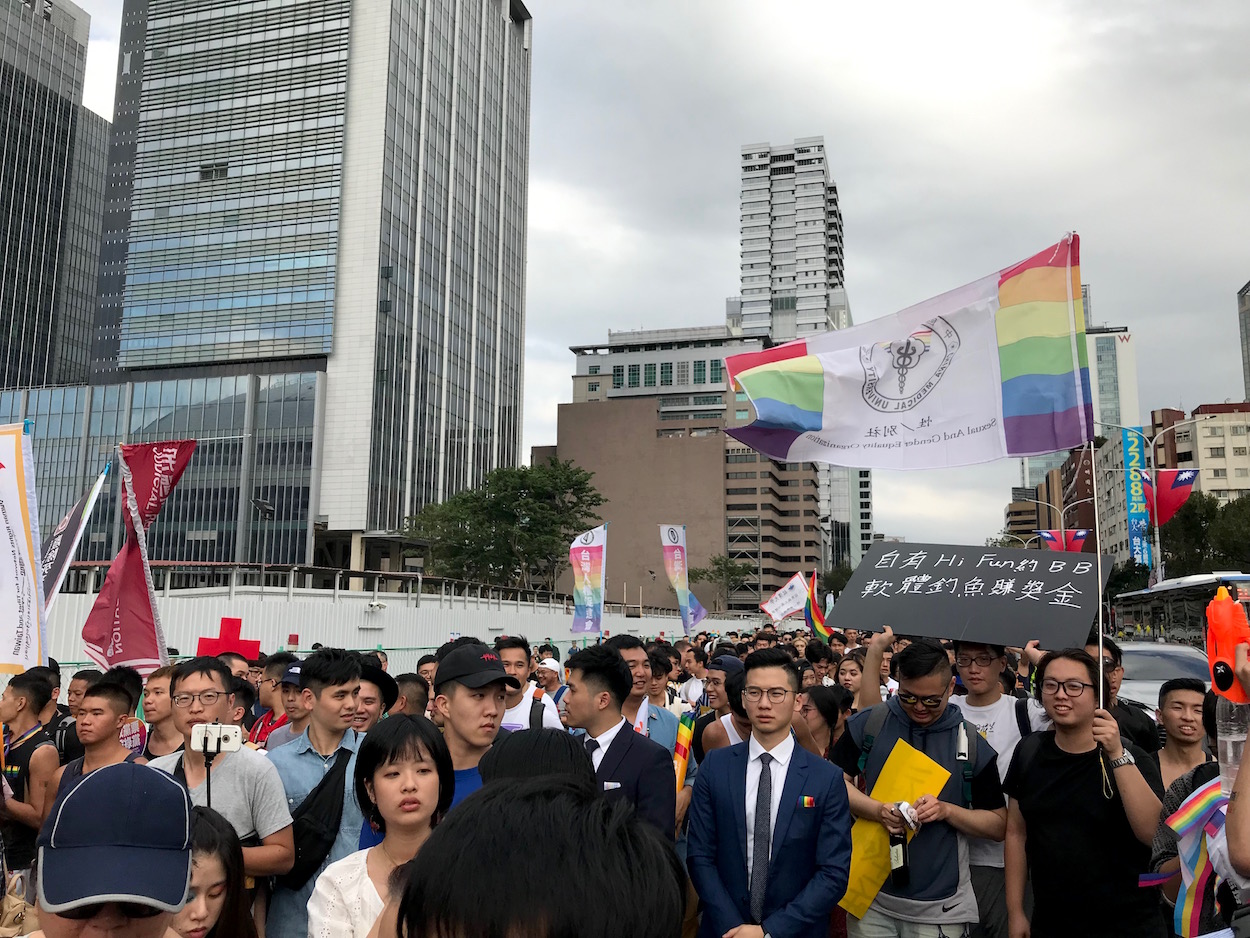 With many international visitors, the large turnout today was in part due to Taiwan making history earlier this year as the first country in Asia to legalize gay marriage. While international visitors came from a number of countries, contingents from geographically close Asian countries or territories, such as Hong Kong, Macau, Japan, and South Korea, were particularly visible.

The Taiwanese government promoted the event with signs welcoming visitors to the pride parade in Taoyuan International Airport, advertisements for the event on banners in Taipei, an exhibition on the history of LGBTQ activism in Taiwan, and through a rainbow crosswalk in Ximending, a center of LGBTQ nightlife in Taipei. 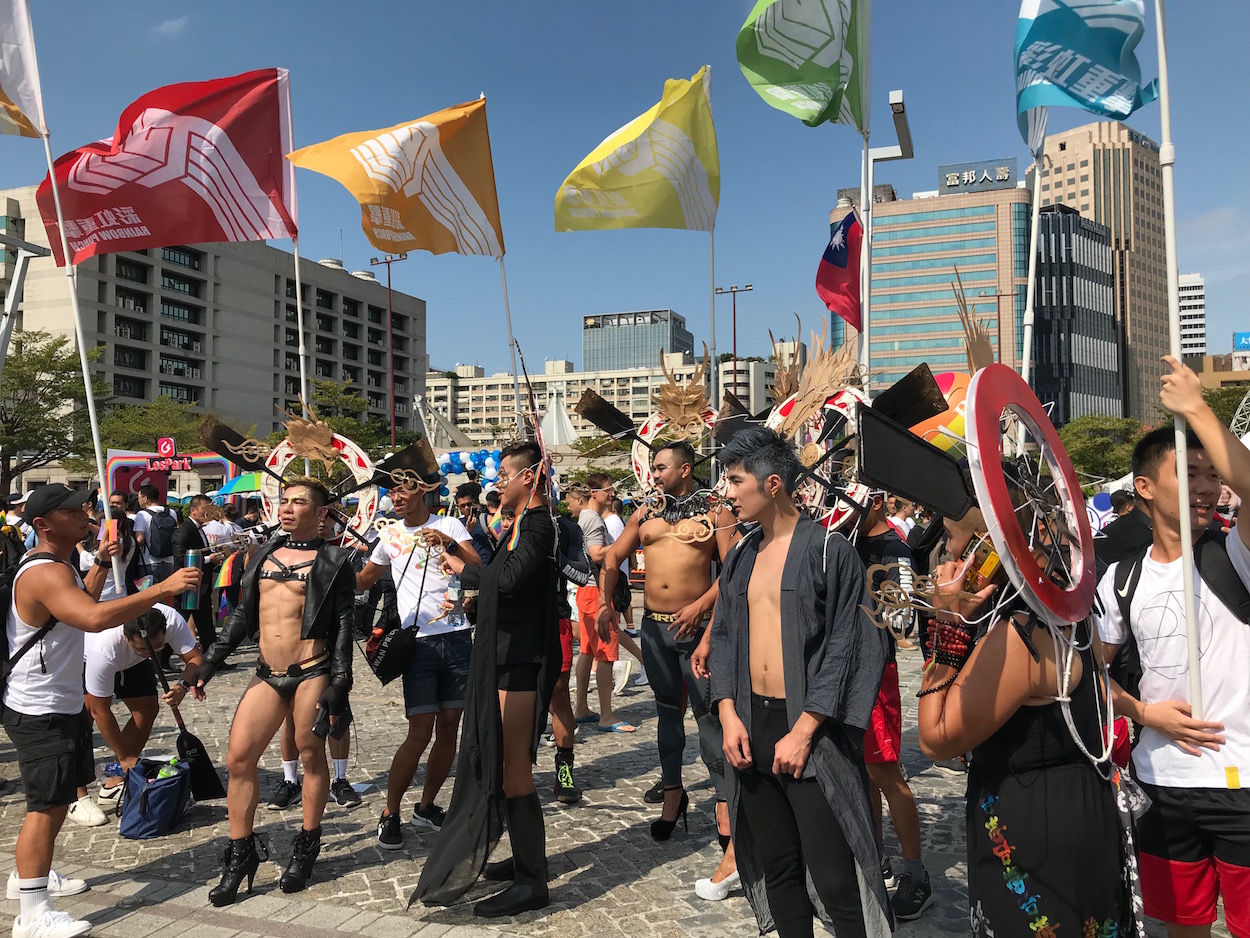 One day before the parade, the first-ever Taiwan Trans March took place, starting at the Nishi Honganji Temple and marching in a circular route through Ximending yesterday. Over 1,000 participated in the march, an unexpectedly large turnout.

The pride parade began today at 12 PM, setting out from Taipei City Hall and walking to Ketagalan Boulevard, in front of the Presidential Office Building. This differs from previous years, in which the pride parade began and ended on Ketagalan Boulevard after splitting into contingents that took different routes across Taipei before returning to the starting point. This year, all contingents followed the same route, generally moving in a straight line westward from Taipei City Hall before turning south by the Shandao Temple area and then turning west to arrive on Ketagalan Boulevard. 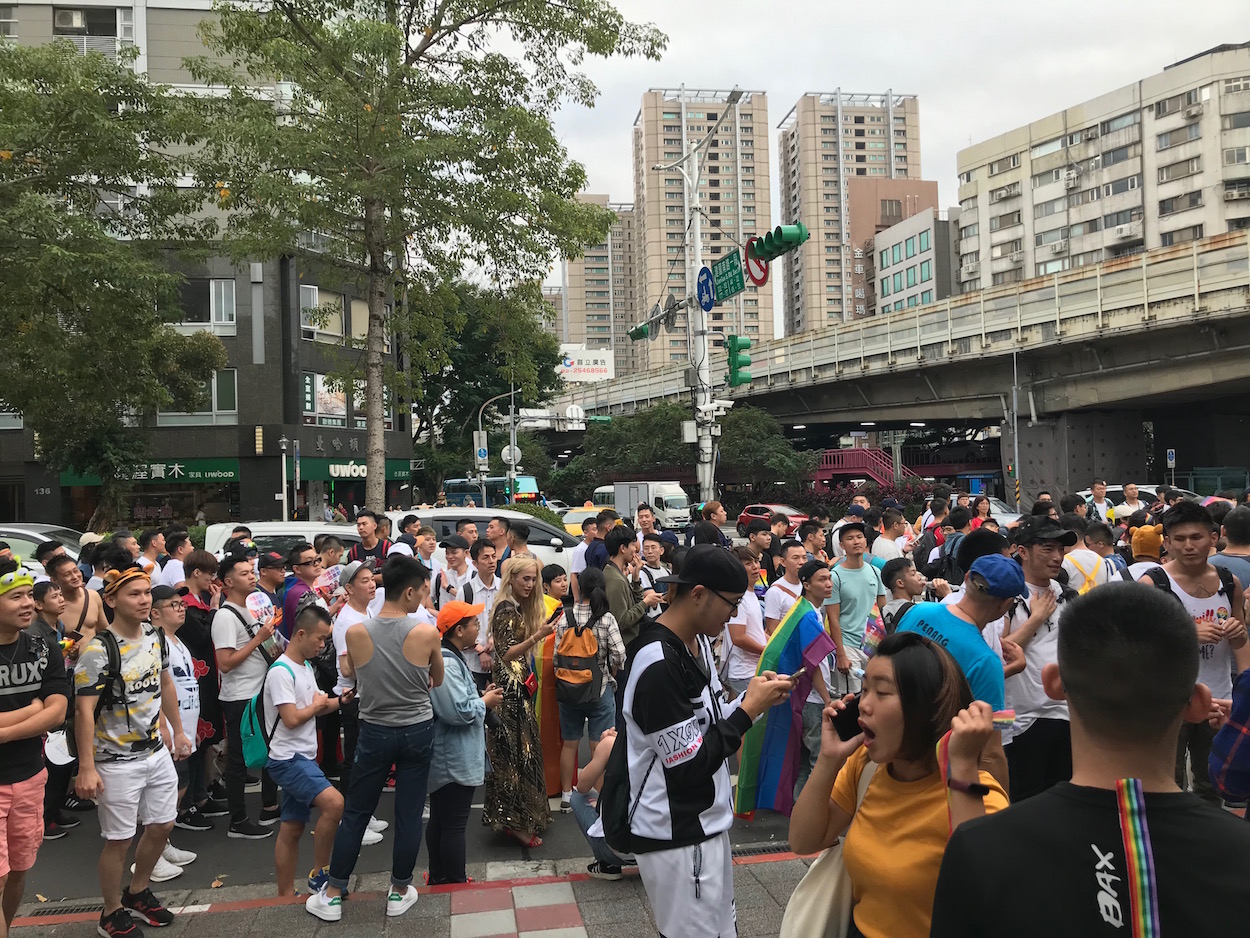 However, the parade proved slow-moving, due to the fact that 200,000 individuals were primarily made to keep in two lanes to allow traffic to continue to move, and participants in the parade were discouraged from walking on sidewalks. Past parades have allowed participants to occupy more space on the road during the parade route, so it proves an unusual measure for the Taipei city government to restrict the pride parade to only two lanes of traffic when it was anticipated ahead of time that this year’s pride parade would be the largest ever in the history of the event. This could have been a potentially hazardous decision, given the risk to parade participants from passing traffic. Indeed, on at least in one occasion, a city bus attempted to cut directly into the parade, veering dangerously close to parade participants before being redirected by volunteers assisting with directing traffic. 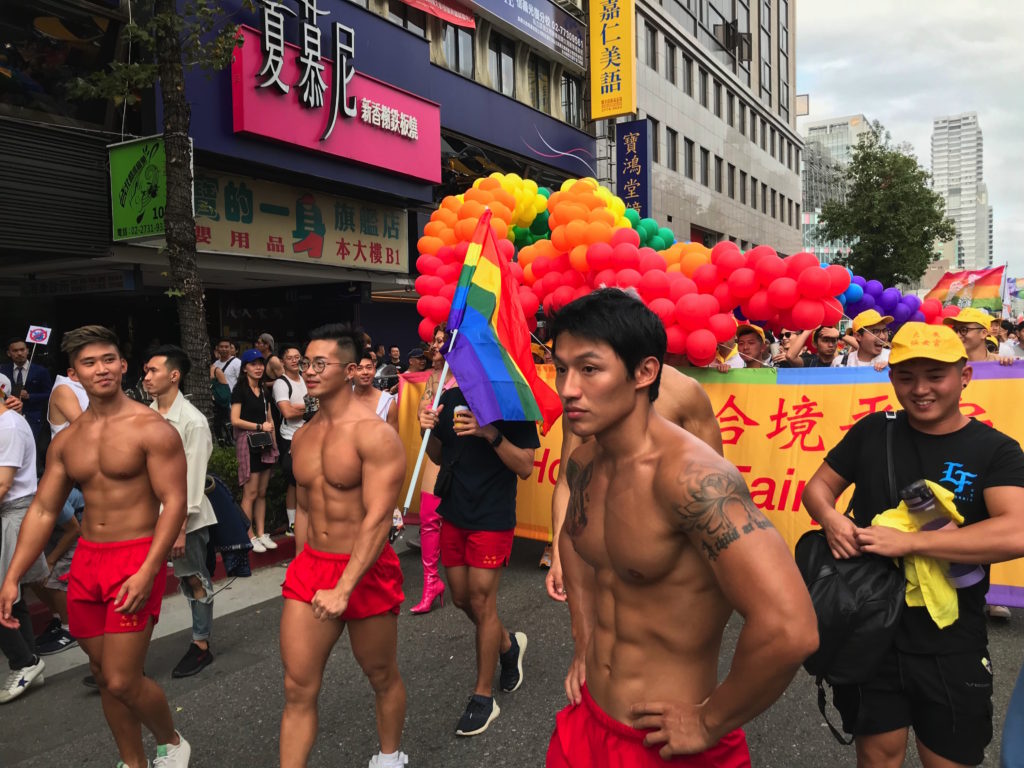 Participant groups in the parade included many of the mainstays of LGBTQ activism in Taiwan, such as the Taiwan Tongzhi Hotline, the Taiwan Alliance to Promote Civil Partnership Rights, and the Tong-Kwang Presbyterian Church, as well as progressive civil society groups as the Covenants Watch, Judicial Reform Foundation, and others. Third Force parties such as the New Power Party, Social Democratic Party, Taiwan Statebuilding Party, and Free Taiwan Party were also present.

LGBTQ-oriented businesses such as GagaOOLala, LesPark, T-Studio, Heder, and others, too, made showings at the event. One notes that corporate sponsors as Google, KKDay, Gap, Mozilla, Verizon seem to have become an increasingly large presence at the pride parade, with Google marking the parade route in a rainbow color on Google Maps, and event MCs sometimes citing claims that the legalization of gay marriage is good for Taiwan’s economy. Corporate sponsorship may be an increasingly large presence at Taiwan’s annual pride parade, perhaps due to corporations hoping to capitalize off of the fact that Taiwan is the first country in Asia to legalize gay marriage for advertising. 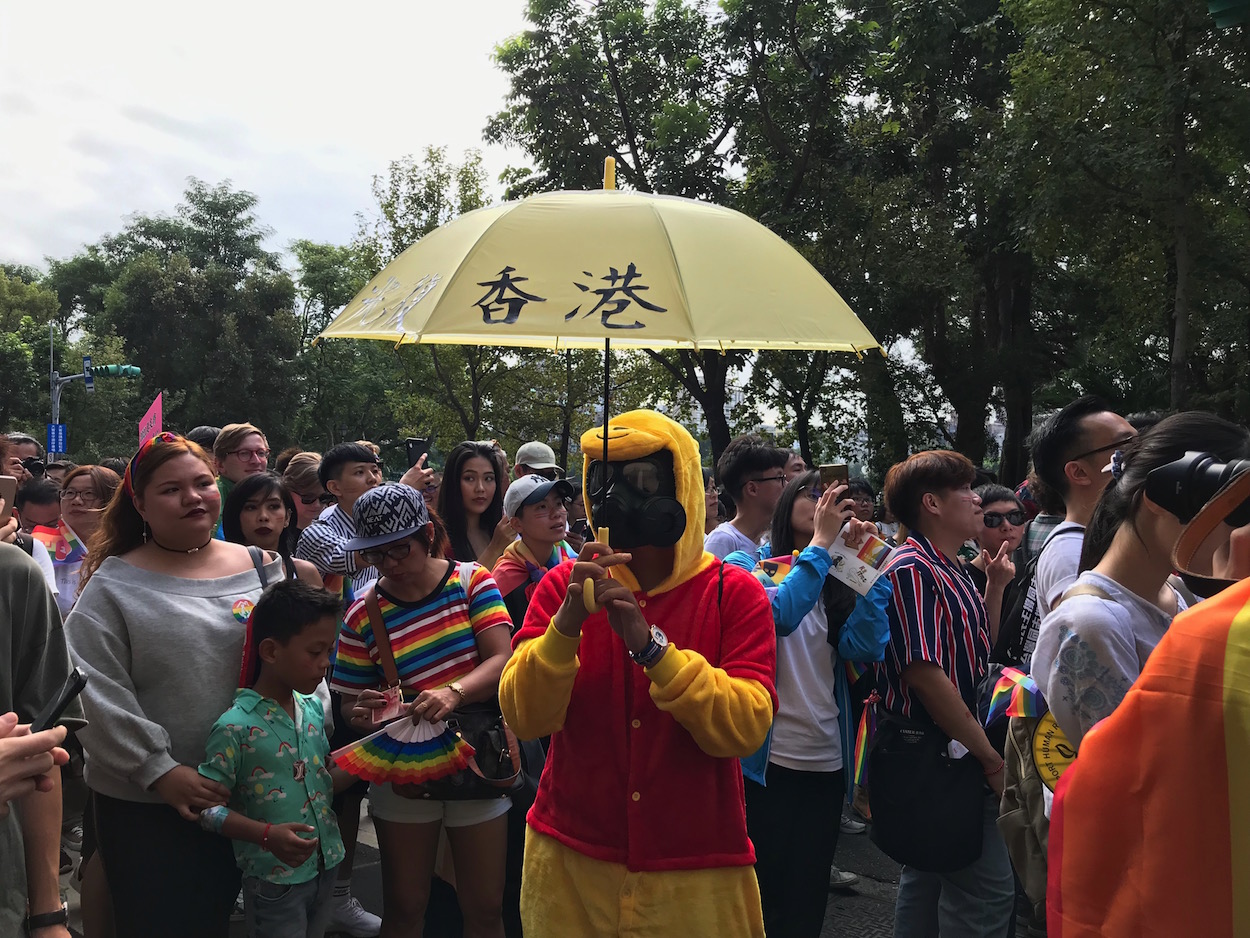 Participant in the march dressed as Winnie the Pooh wearing a gas mask, carrying an umbrella with the words “Hong Kong” on it. Photo credit: Brian Hioe

With conservatives in Taiwan currently pushing for a repeal of the current curriculum of sexual education in Taiwan, which they see as promoting of gay-friendly social attitudes, a number of speakers at the event referenced the need to defend sexual education in Taiwan. Speakers were critical of how under current laws, if a Taiwanese person marries a foreigner of the same sex, that individual must come from a country that has legalized gay marriage for that marriage to be recognized in Taiwan. Speakers also called for the need to amend that same-sex couples are only allowed to jointly adopt children unless they are the biological children of one of the members of the couple.

A number of signs at the parade referenced upcoming Taiwanese presidential elections in January 2020, citing the need to defend democracy, crediting President Tsai Ing-wen for legalizing gay marriage, or lashing out at the KMT, which has historically been opposed to gay marriage. One also notes that many signs at the parade referenced the ongoing protests in Hong Kong, featuring protest slogans as “Restore Hong Kong, Revolution of Our Times” or “Five Demands, Not One Less.” A number of participants dressed up as frontliners in the Hong Kong protests often do, wearing gas masks and safety helmets, and at least one participant dressed up as Winnie the Pooh wearing a gas mask, referencing mockery of Chinese president Xi Jinping as physically resembling cartoon character Winnie the Pooh. A number of these individuals seem to have been Hongkongers that traveled to Taiwan for the parade. A speaker truck at one point played protest anthem “Glory to Hong Kong” during the march. 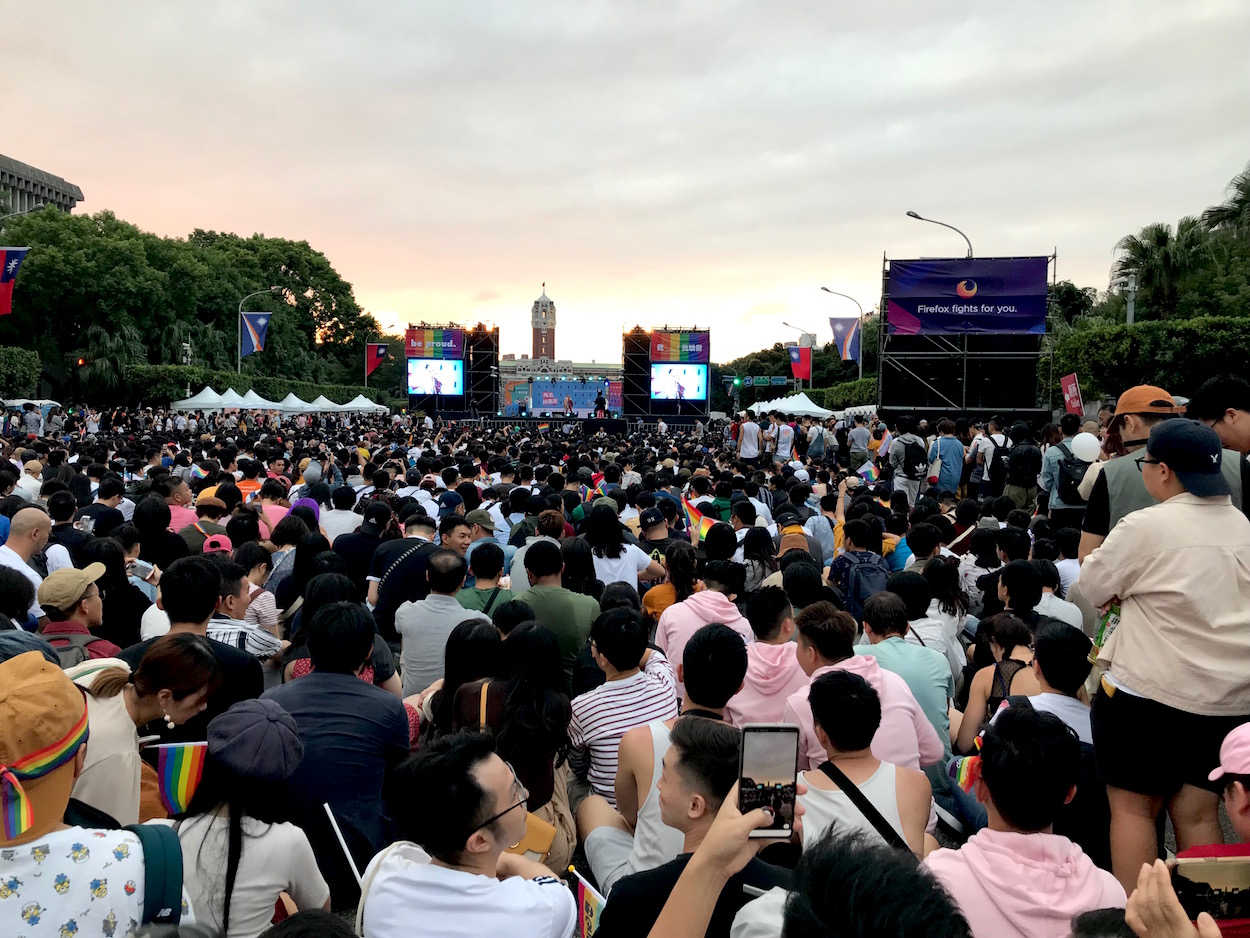 Concert on Ketagalan Boulevard at the end of the march. Photo credit: Brian Hioe

The 2019 Taiwan LGBT Pride parade suggests that the event will continue to grow in future years, with Taiwan likely to be seen as a beacon of LGBTQ rights in Asia in the wake of the historic legalization of gay marriage earlier this year. While there remain a number issues to be addressed in Taiwan, it is to be hoped that Taiwan becoming seen as a beacon for LGBTQ rights can provide the momentum for efforts to make Taiwan a more inclusive place for sexual freedoms, and that, in this way, Taiwan can set an example for other countries in the region.