THE RECENT TURN of groups previously protesting against marriage equality to demonstrating against drugs illustrates the reactionary underpinnings to their thought. Namely, this change in focus by anti-marriage equality groups is part and parcel of continued attempts to paint gays in the most negative of terms by depicting them as drug addicts. Anti-marriage equality groups very likely hope that through using the sharply ingrained taboo against drugs in Taiwanese society and riding on current social backlash against drug users and sellers in depicting gays as drug users, this will allow their views to gain more circulation in society.

The strong showing by anti-marriage equality groups in demonstrations last year was successful in allowing recalcitrant elements of the DPP to back off or even reverse course on the push to legalize marriage equality. The large numbers of demonstrators that the “Protect The Family Alliance” was able to mobilize was shocking to many, since it was expected that by many beforehand that because of Taiwanese society’s relatively progressive nature, the legalization of marriage equality would not pose a significant challenge. As many member organizations of the “Protect The Family Alliance” were Christian fundamentalist groups, much of society had also not realized beforehand that Christian fundamentalist groups were present in such numbers in Taiwanese society, and this took many by surprise. In backing off from marriage equality, very probably elements of the DPP were never so strongly in favor of legalizing marriage equality to begin with, despite the fact that this was one Tsai’s campaign promises. 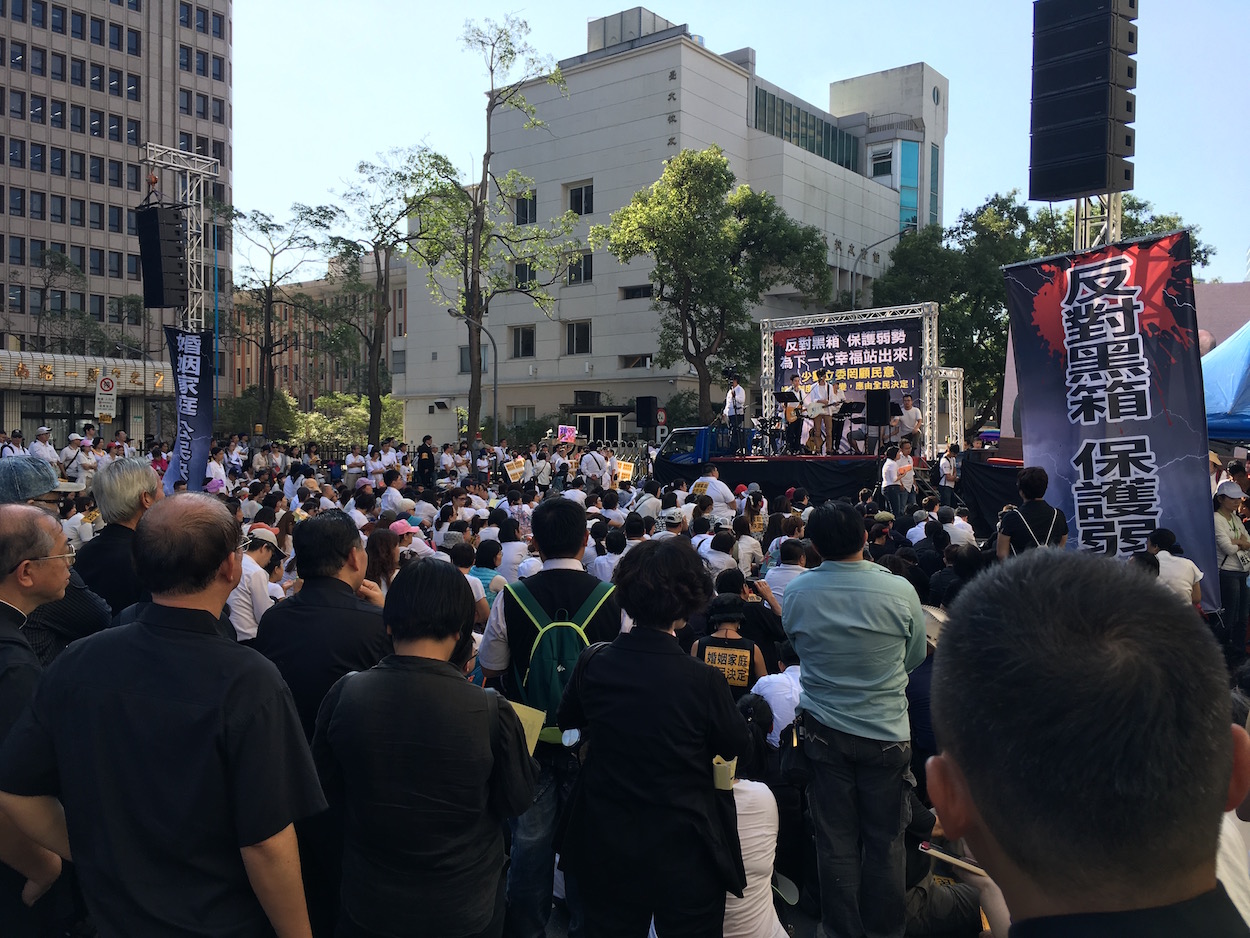 On the other hand, with the recent switch to demonstrating against drugs, it may seem as if members of the “Alliance Of Crying For Hope” are switching their primary issue to something completely unrelated to sexual or gender education or marriage equality. Nevertheless, in line with demonstrating against sexual and gender education and marriage equality in the name of “protecting the family” and “protecting the children,” the aim of such protests is to paint gays as part of Taiwan’s drug problem and morally degenerate in that way, as linked to attempts to portray the casual usage of drugs as prevalent in the gay community as evidenced through the spread of HIV, and tied to the attitudes of sexual promiscuity they see as rampant in the gay community.

Indeed, returning to the need for better forms of sexual education or drug education in Taiwan, many myths still prevail about HIV and the means by which it spreads, leading to past incidents of discrimination against HIV positive individuals from institutions that really should no better, such as schools, government agencies, or the police, as we see in the case of the expulsion of an HIV positive high school student last year. But obviously this provides a useful leverage point for groups as the “Alliance Of Crying For Hope” and their ilk to try and gain traction for their views in Taiwanese society. 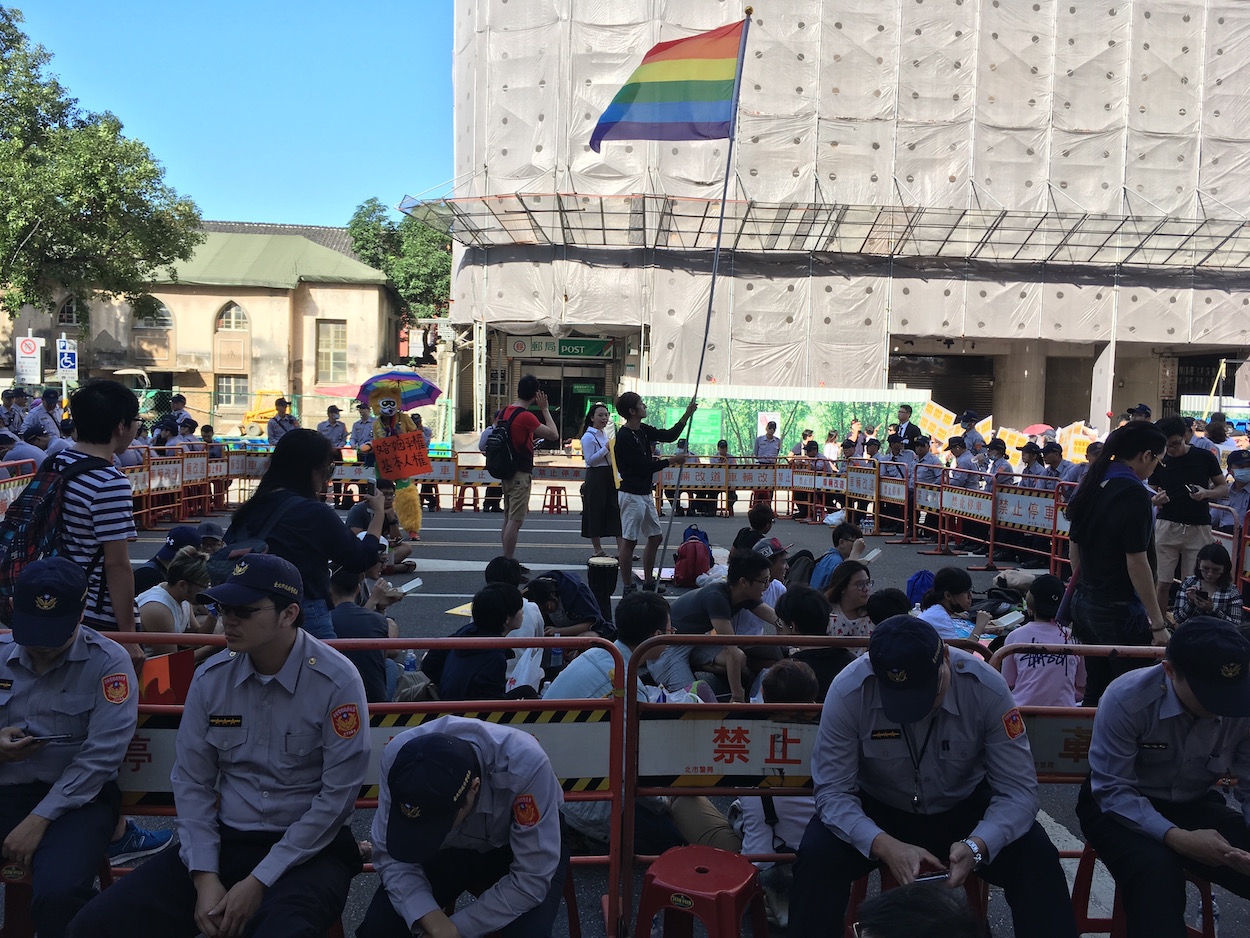 Through stigmatizing LGBTQ individuals and drug users, this would be the “Alliance Of Crying For Hope” bringing together two highly conservative and reactionary ideologies in Taiwanese society, not only with regard to discrimination against members of the LGBTQ community but in regards to how drug users are sometimes treated as though they have ceded their humanity in many societies. Whatever one says about the progressive nature of mainstream Taiwanese society, there, too, is a sharply reactionary undercurrent to Taiwanese society, as one can observe in the social attitudes that the “Alliance Of Crying For Hope”, “Protect The Family Alliance” and other groups are hoping to tap into.

One can observe these attitudes as extending to how the government has treated members of the LGBTQ community. In the past, Taiwan has seen incidents in which LGBTQ spaces as gay bars or nightclubs are disproportionately targeted by police or other authorities in drug crackdowns because of the view that drug use would be rampant in these spaces, particularly in several infamous incidents which took place under Chen Shui-Bian’s mayorship of Taipei. In spite of claims that Taiwan has been on the precipice of legalizing gay marriage across the past several years, reports of disproportionate police raids on gay bars, gyms, and nightclubs in urban spaces continue, with some in fact perceiving raids as on the uptick, as evidenced in a gay gym being raided 26 times in six months in 2015 by police operating without warrants, as well as other events in the past year.

The targeting of the LGBTQ community using social stigmas regarding drug usage is evidence of the utterly reactionary nature of the “Alliance Of Crying For Hope”. But in that respect, what this points to is that even if marriage equality were to be legalized, a long walk that needs to be walked in terms of changing social attitudes in Taiwan and fighting conservative views within Taiwanese society.