TAIWAN’S MINISTRY of Labor (MoL) hosted a forum on October 2nd to consider allowing labor brokers to charge migrant workers additional fees after completing their first three-year employment contract. The government amended the Employment Service Act (就業服務法) in 2016 to ban the practice of charging such exorbitant fees, along with the requirement that low-waged migrant workers leave the country every three years. At the time, legislator Lin Shu-fen reported receiving death threats from labor brokerage agencies for sponsoring the amendments. According to the MoL, the need to reconsider the ban on brokerage fees levied at the end of migrant workers’ contracts arose from unforeseeable consequences of lifting the requirement for migrant workers to leave the country before signing a new fixed-term contract. 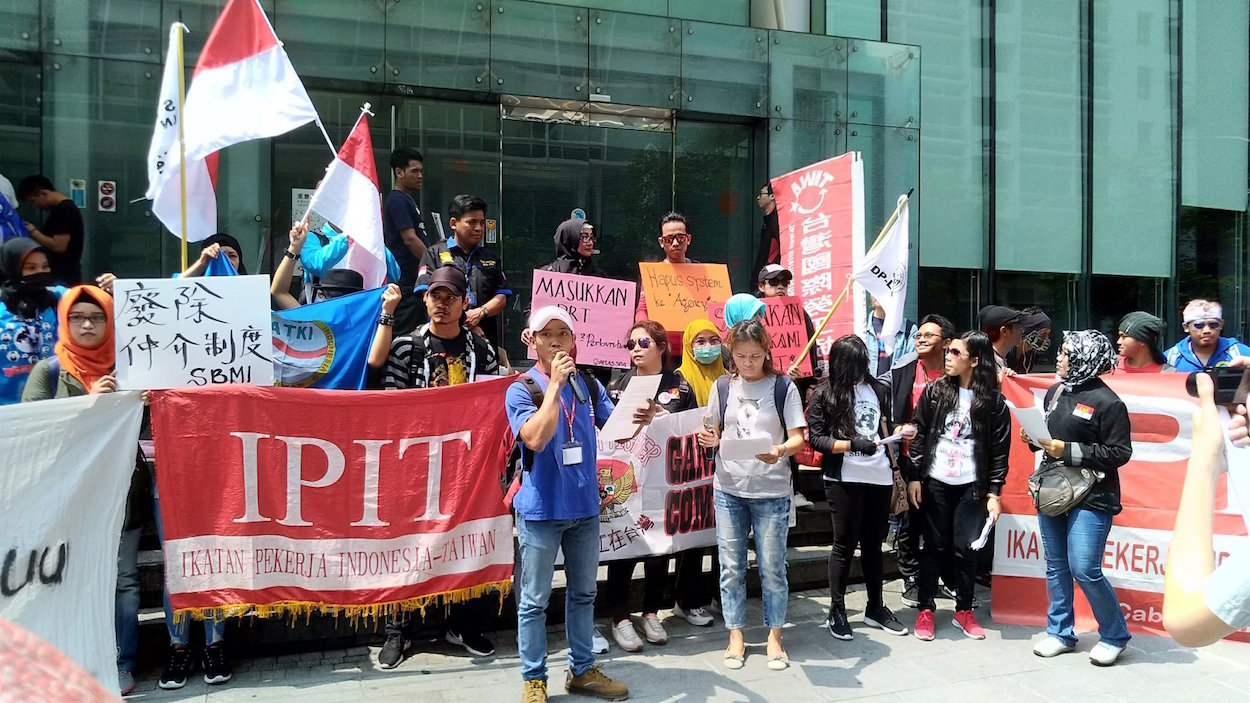 In essence, the labor broker representatives argued that higher costs associated with migrants ditching abusive employers for better jobs would put them, the “Class A” (A級) labor brokers, out of business. Labor brokers were apparently unaware that, according to their mode of reasoning, “matching” migrant workers with abusive employers was apparently a prerequisite of being a “highly skilled” labor broker. More importantly, what this logic fundamentally neglects is that the market for migrant labor is irreducible to economic factors.

In addition to leaders of labor broker associations, the MoL also invited members of civil society organizations, officials from the Thai, Filipino, Indonesian, and Vietnamese governments, and representatives of employers’ groups to the closed-door session. Many of the more heated exchanges took place between labor broker representatives and members of migrant worker advocacy organizations. During the course of the meeting, however, the latter returned again and again to the role of the Taiwanese government. The MoL, represented by Workforce Development Agency Director-General Huang Chiu-kuei (黃秋桂), attempted to portray the MoL as a mediator between competing interests. Nevertheless, members of migrant worker advocacy groups fiercely insisted that the government is not, in fact, a neutral party. Instead, the Taiwanese state actively supports migrant labor brokers through the restriction of migrant workers’ rights and freedoms to live, work, and move across various socio-political boundaries. Labor brokers, of course, are not a natural phenomenon, but rather emerged with the development of the guest worker program in the 1990s. The state is therefore deeply complicit in the exploitation of migrant workers by labor broker agencies. In a similar vein, the government has frequently been criticized for being the leading employer of precarious temporary workers through dispatch agencies. Indeed, there are close ties between labor broker agencies, state, and quasi-state entities, including in the murky world of the Taiwanese commercial fishing industry.

According to the Migrant Empowerment Network in Taiwan (MENT), labor broker agencies have continued charging migrant workers between NT$20,000 to NT$100,000 to continue working in Taiwan with impunity. At a rally before the forum, members of the Taiwan International Workers’ Association (TIWA) denounced the proposed changes and the government’s inaction, arguing that the proposed payment structure put together by labor broker agencies would simply legalize what is already a pervasive illegal practice. The “job-buying fees” (買工費) proposed by migrant labor brokers constitute a heavy financial burden for migrant workers typically earning less than NT$18,000/month, and who are often saddled with debt. 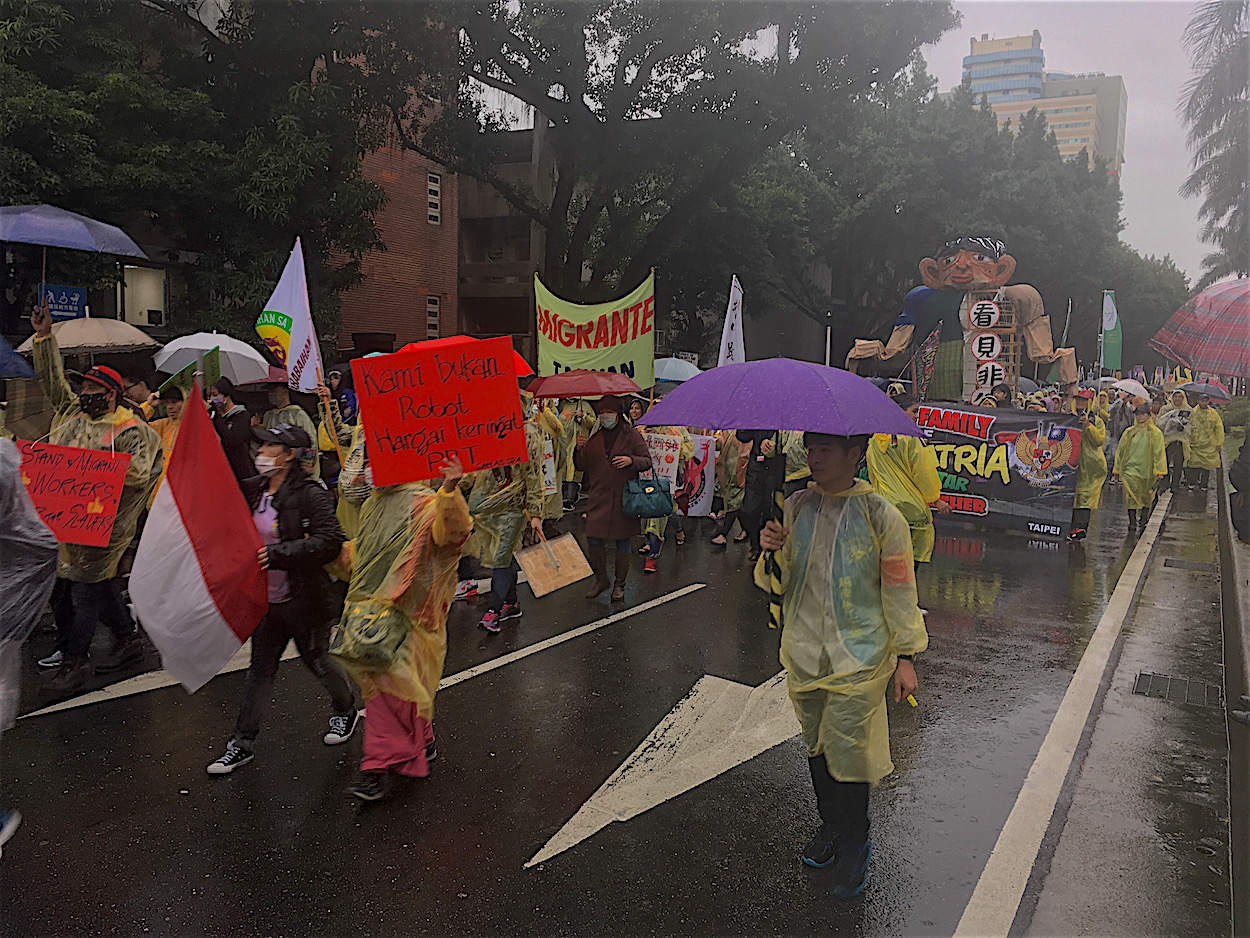 The state’s interest in devaluing and disciplining labor has important implications for alternative visions of regional migration. Migrant labor groups are overwhelmingly in agreement that the system of private labor brokerage should be abolished. In an instance of politics making strange bedfellows that Marx would be howling over, migrant workers may find sympathy in this struggle among employers, who are also a target for extortionate fees under the proposed changes. Discussion of what would replace the system of labor brokerage in public discourse has largely been narrowed to direct hiring through government-to-government agreements. Given the state’s historical orientation and technologies of power, there is no a priori guarantee that such a system would, in practice, improve the conditions of migrant workers in Taiwan.

An alternative draws from “no borders” movements that have gathered force at various intensities and paces in recent decades. The strength of nationalist sentiment, however, makes rocky terrain for such movements for self-autonomy. Still, in the spirit of Kathi Weeks’s affirmation of utopian politics in The Problem with Work, it is worth imagining a path towards freedom.