THE SAME-SEX marriage bill cleared its third reading in the legislature today, with most articles from the Executive Yuan’s version of the bill being incorporated into the final bill. This bill passing into law takes place shortly before the May 24th deadline originally set by the Council of Grand Justices two years ago in 2017 that some form of same-sex marriage needed to be legalized by. Taiwan is now the first country in Asia to legalize gay marriage. 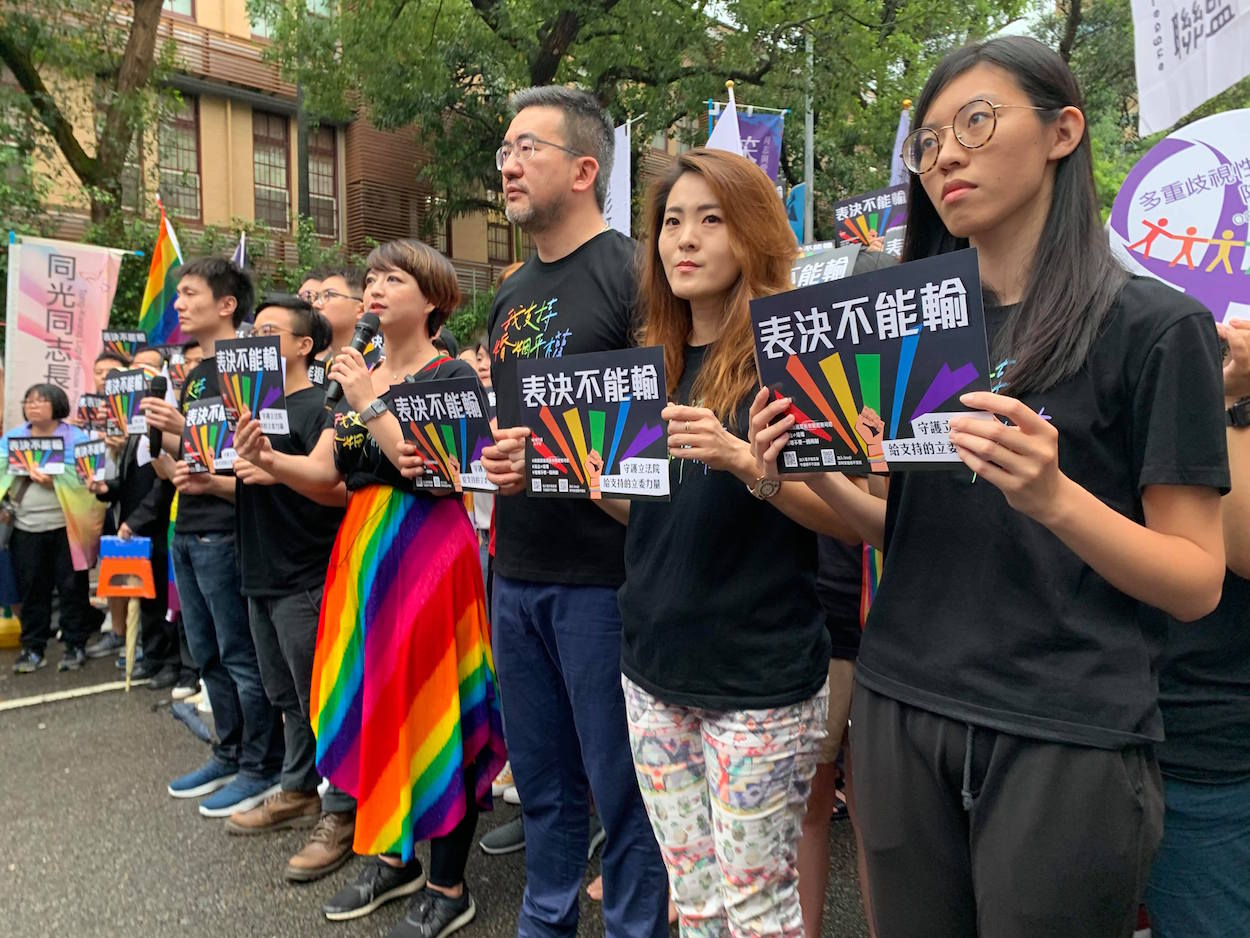 If the deadline passed with no action by the legislature, same-sex couples would have automatically received the same rights as heterosexual couples, even if this would be uncharted legal territory in the absence of any amendments to the legal code.

With three competing versions of the gay marriage bill discussed this week, marriage equality advocates called for two rallies to take place. The first rally took place on Monday, when cross-caucus consultations regarding the same-sex marriage bill took place. This rally drew approximately 1,500 participants outside of the Legislative Yuan. However, cross-caucus consultations broke down relatively quickly, with KMT legislator Lai Shyh-bao, who proposed the version of the bill often viewed as least favorable to gay marriage in attempting to exclude same-sex couples from the definition of marriage, leaving the session. The second and final rally was called for today, in order to coincide with voting on the bill. 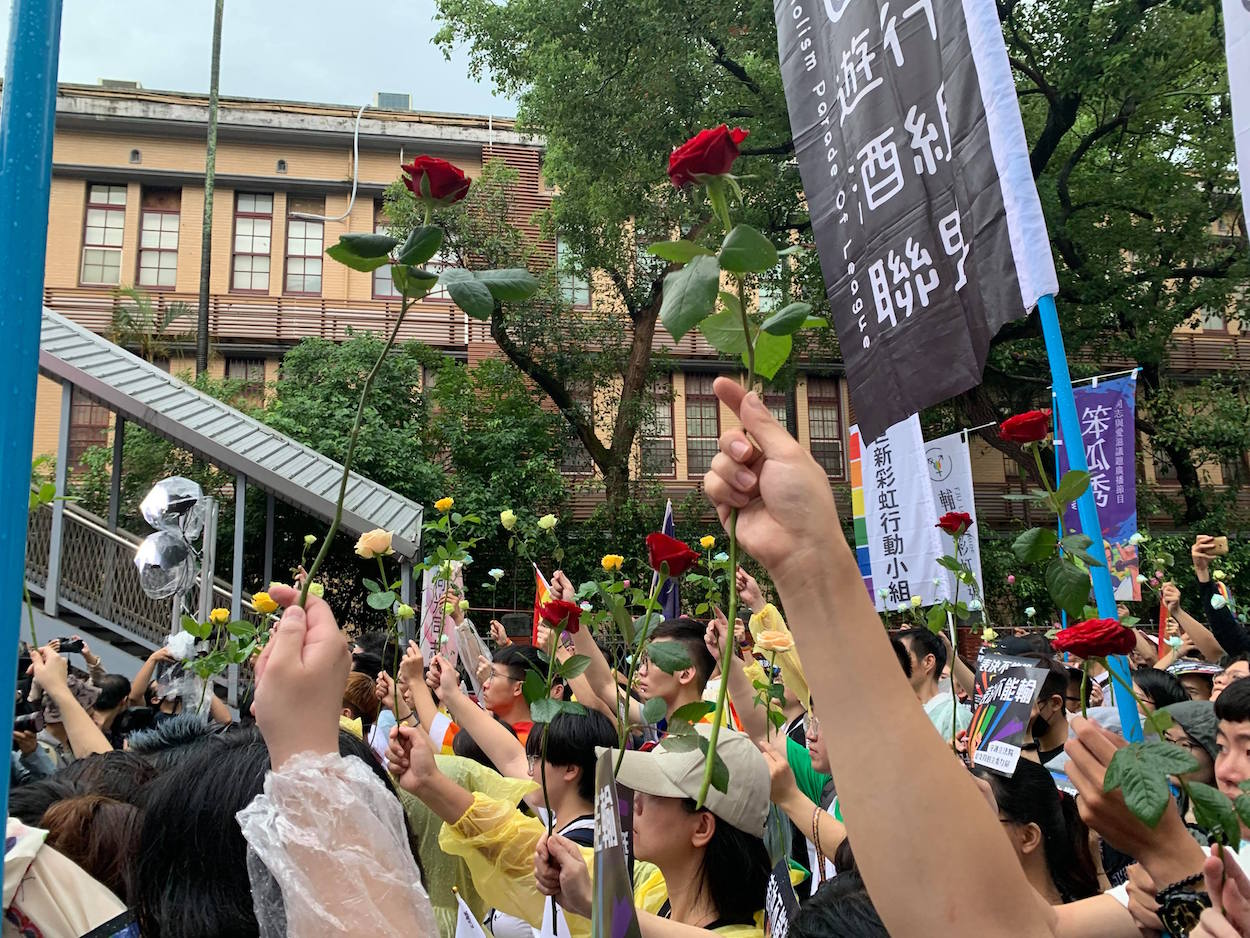 As a result, over 40,000 participants gathered outside of the Legislative Yuan during the voting process. Among participant LGBTQ advocacy groups included parent and family groups, such as Taiwan LGBTQ Family Advocates, Pride Watch, the Taiwan Tongzhi Hotline, and others. Speakers included legislators supportive of gay marriage from the DPP and NPP. Sam Yang of indie rock band Fire EX attended, singing a song supportive of gay marriage, as did Taiwanese New Wave filmmaker Tsai Ming-liang, who gave a short speech. A number of indigenous groups also participated, with MCs at the rally at one point leading the crowd in calling for the return of indigenous traditional territories. Third Force parties such as the NPP, SDP, and Taiwan Statebuilding Party gave speeches, as did Sunflower Movement student leader Lin Fei-fan.

Religious authorities supportive of gay marriage, such as representatives of the Tong-Kwang Light House Presbyterian Church, and Reverend Joseph Chang, Taiwan’s first openly gay pastor, too, were present. Speakers emphasized throughout that they did not believe organized religion, in any form, should reject members of the LGBTQ community. A memorial ceremony was also held for deceased members of the LGBTQ community, such as Yeh Yung-chih, who killed himself in 2000 at the age of fifteen because he was bullied for being gay. 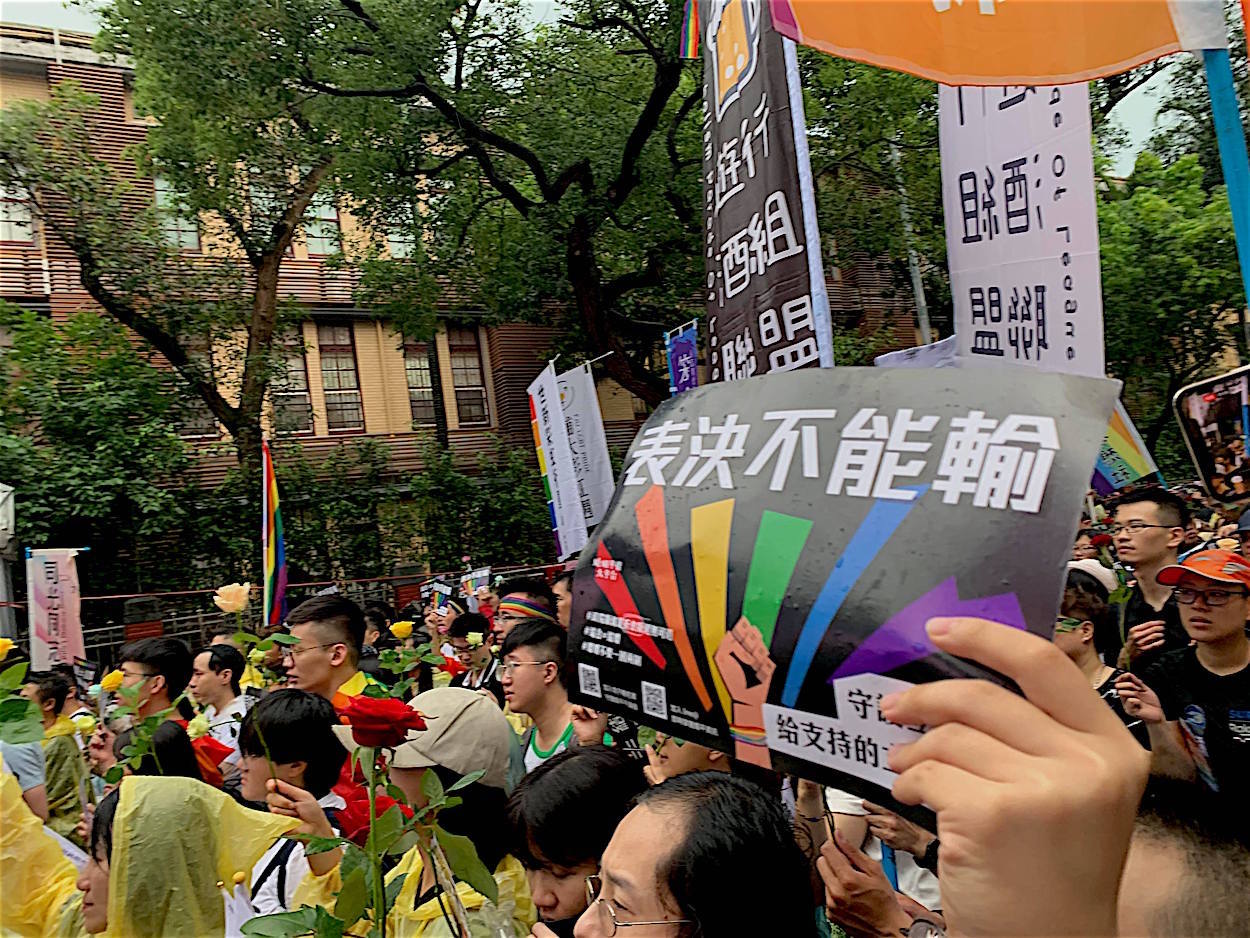 The mood at the demonstration was alternatively cheerful and angry. With the livestream of the legislative session playing in the background, during the line by line review of the bill, when demonstrators cheered when legislators supportive of gay marriage took the stage, such Huang Kuo-chang or Freddy Lim of the NPP, and booed when legislators opposed to gay marriage gave speeches, such as Lai Shyh-bao of the KMT. Jason Hsu of the KMT received a mixed response, given growing views that despite lip service paid to gay marriage by Hsu, he has primarily voted with his party. This has, among other things, led activist comedian Indie DaDee to start a satirical Facebook event mocking Hsu for his hypocrisy in the past day.

Three versions of the same-sex marriage bill were originally under discussion this week, with the NPP blocked from advancing its version in past weeks. 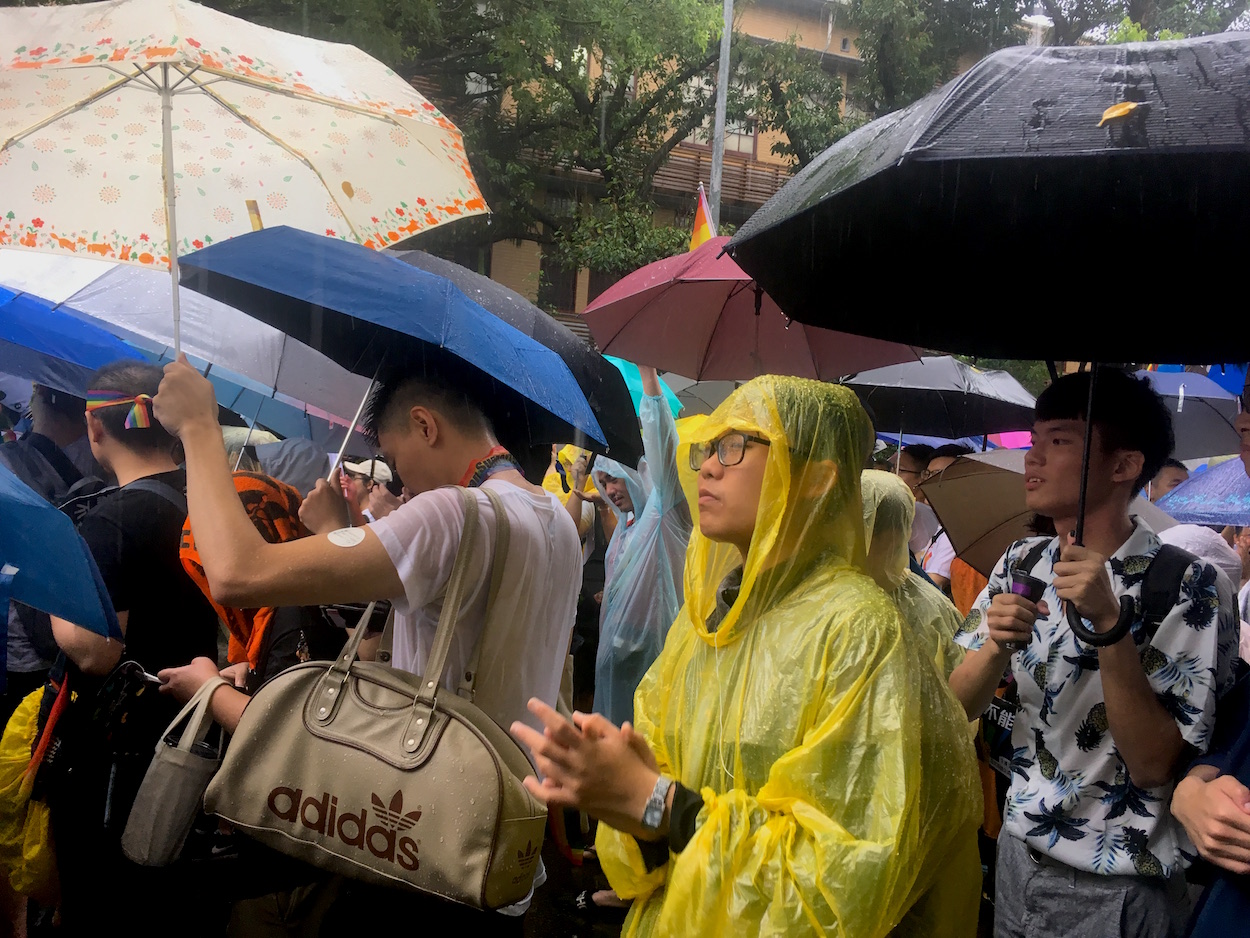 The first was sponsored by legislator Lai Shyh-bao of the KMT, as backed by the Happiness of the Next Generation Alliance, a key force in organizing against gay marriage last year during the referendum. The bill was seen as possibly denying gay couples the right to adoption altogether, claiming that “a same-sex family member should sign documents with the other same-sex family member to exercise the right to joint custody,” but avoiding discussion of adoption. The NPP had attempted unsuccessfully to block this bill from proceeding further in the legislature at various points in previous months.

A second bill was sponsored by HTC chair Cher Wang, DPP legislator Lin Tai-hua, and backed by Wang’s Faith, Hope and Love Foundation. This bill proved especially controversial, seeing as it contained the provision for same-sex marriages to be dissolved if courts rule that a marriage is not for the purpose of “living life together”, allowing prosecutors and social welfare agencies to file to dissolve marriages. This could, among other things, potentially open a legal path for families to try and dissolve same-sex marriages they do not approve of, though the bill claimed that this is in order to prevent “fake marriages.” 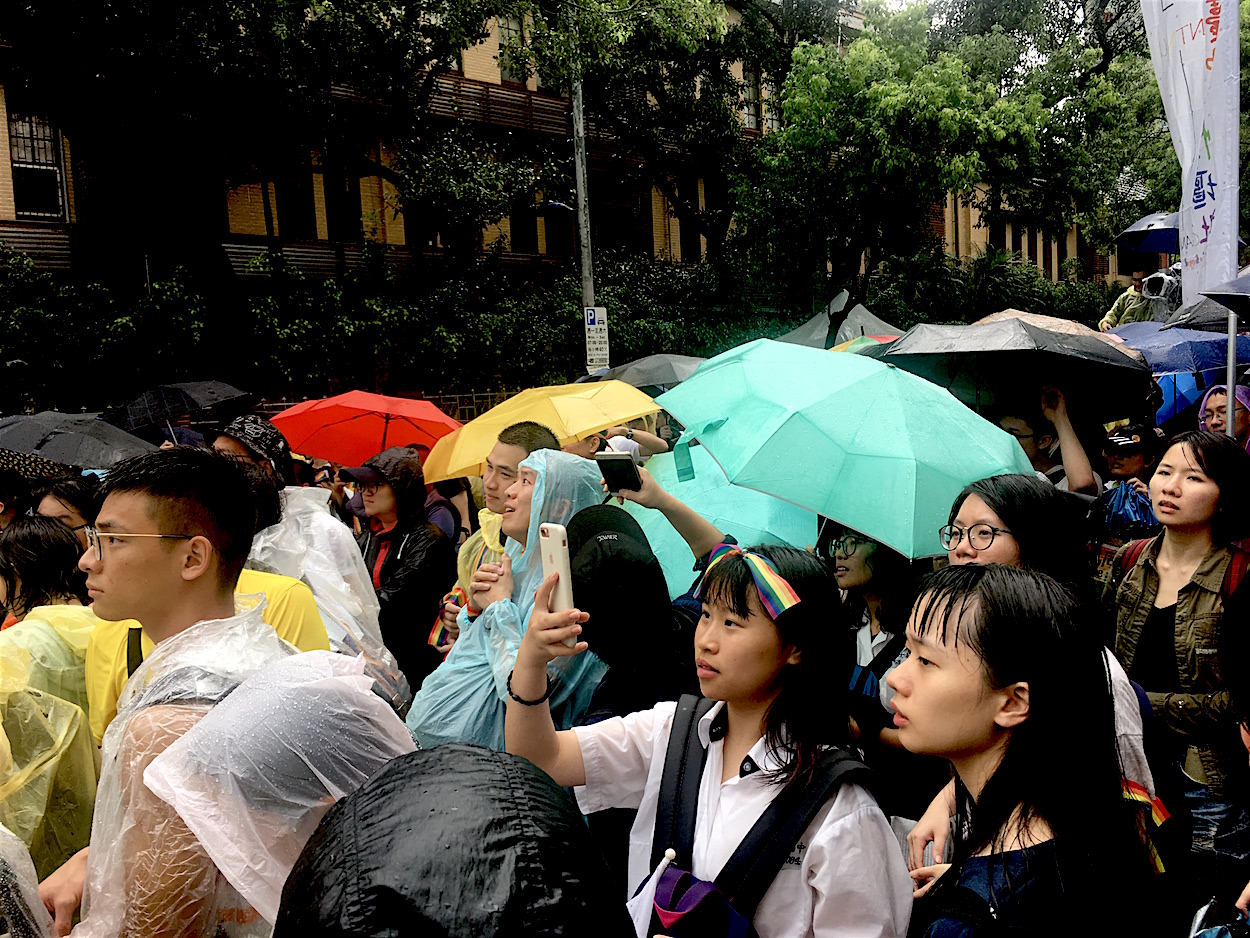 Both bills sought to exclude same-sex unions from the definition of marriage. In the past two years, anti-gay groups have been adamant on this point, with the view that if same-sex unions are admitted to the legal definition of marriage, this would be disruptive of the institution of the family. Lin’s version of the bill used the term “same-sex family members” in lieu of “same-sex marriage,” while Lai’s version of the bill used the term “same-sex unions.” Nonetheless, relevant articles from these versions were not incorporated into the final version.

The Executive Yuan’s version of the bill also proved flawed. Articles incorporated into the final bill from the Executive Yuan’s version of the bill specified that gay couples would not be allowed to jointly adopt children unless they are the biological children of one of the members of the couple. This will lead to circumstances in Taiwan in which one member of a gay couple will adopt a child, but not both. Taiwan currently has no surrogate mother system and the law did not make any provisions for this. 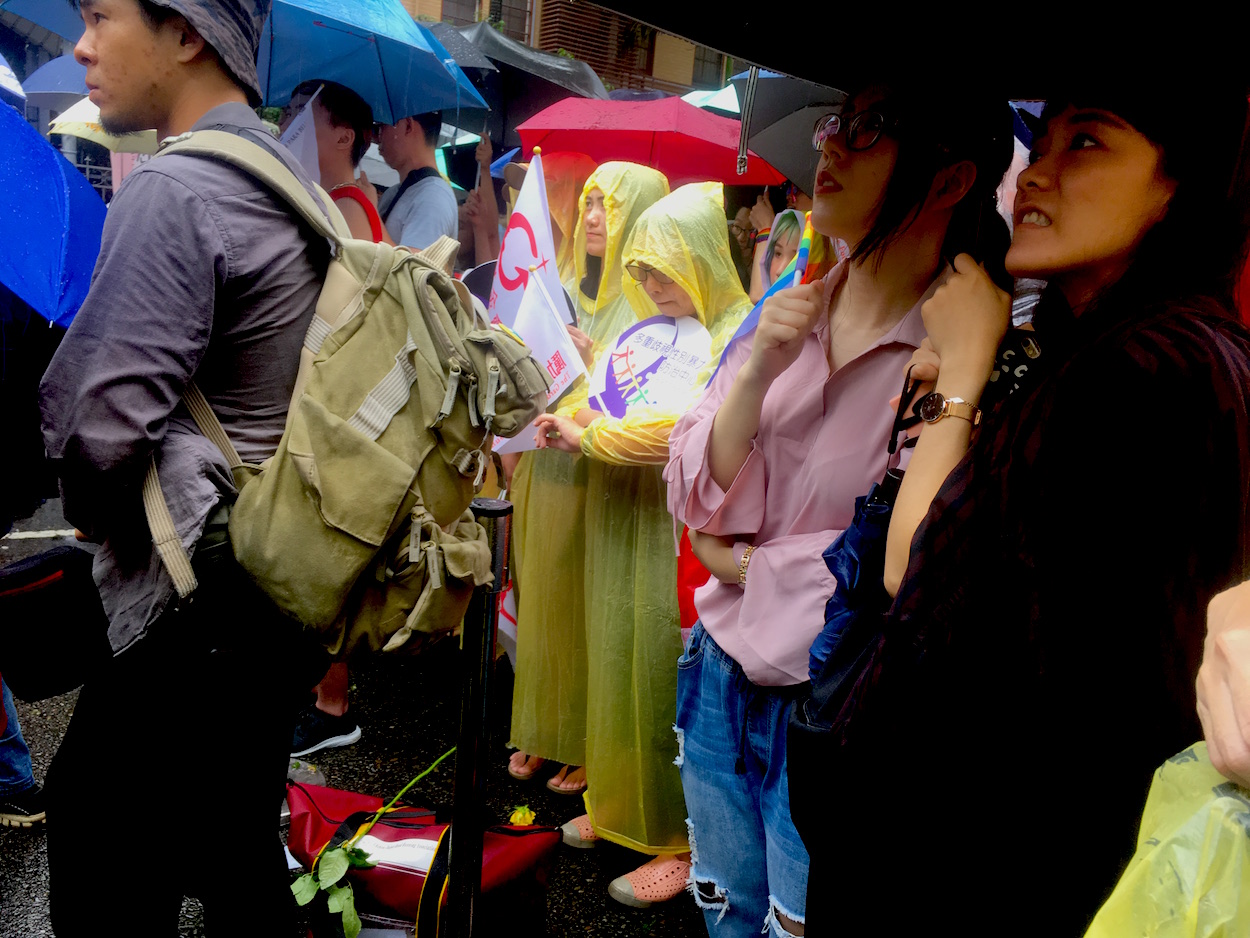 To this extent, same-sex marriages between Taiwanese and foreigners would only be recognized if both countries recognize same-sex marriage, and pathways to Taiwanese citizenship for such foreigners remain unclear. The NPP attempted to push for a change to this article during the review of the bill, but this was unsuccessful. The NPP’s attempt to change this article being voted down led to criticisms from the MCs of the demonstration outside the Legislative Yuan and a strong reaction from a member of the crowd who seemed to have a foreign partner.

Indeed, some view the Executive Yuan’s version of the bill as closer to civil partnerships rather than true marriage equality. 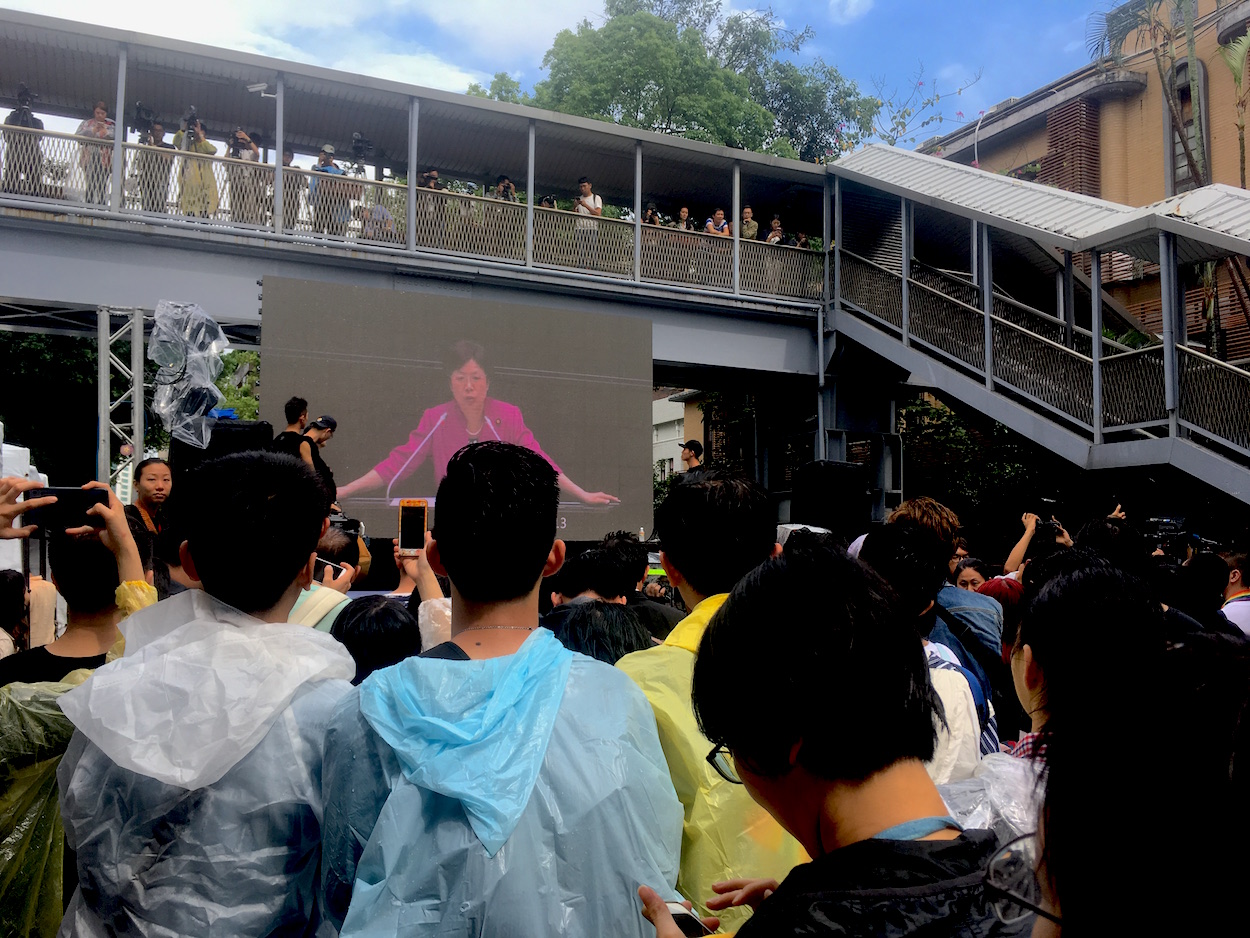 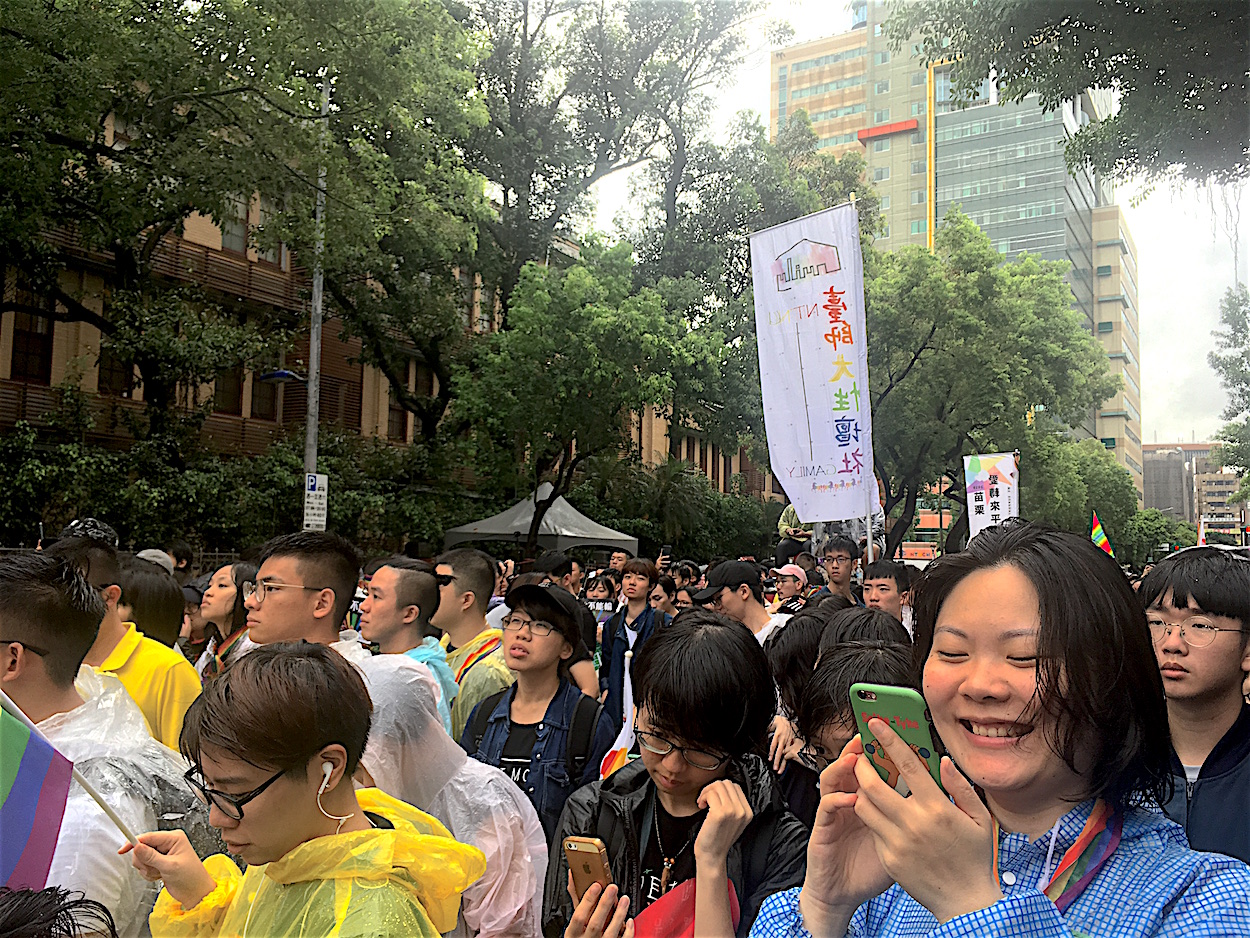 However, the term “marriage registration” was added again to the bill today. Indeed, if this was not added to the bill, the bill would have likely seen a legal challenge that the bill did not comply with the ruling by the Council of Grand Justices, which specified that same-sex marriages needed to be legalized. Before the vote, DPP majority speaker Ker Chien-ming ordered on the basis of party authority that all DPP members needed to be present for the vote and vote for the Executive Yuan’s version of the bill, with the threat of disciplinary action against DPP members that were not present. Yet according to LGBTQ advocacy groups today, the DPP did not actually take attendance of which legislators were present and which were not.

Despite the final bill incorporating most aspects of the Executive Yuan’s bill, it seems likely that the bill will still see challenges from anti-gay groups as well as legislators opposed to gay marriage going forward. Anti-gay groups, for example, are planning on running close to 80 legislators in the next set of elections. Though it remains to be seen whether this is simply talk, anti-gay legislative candidates will likely campaign on a platform of reversing the legalization of gay marriage. As such, MCs at the demonstration outside the Legislative Yuan called on participants, who were primarily young people, to continue to try and dialogue with older demographics less supportive of gay marriage. 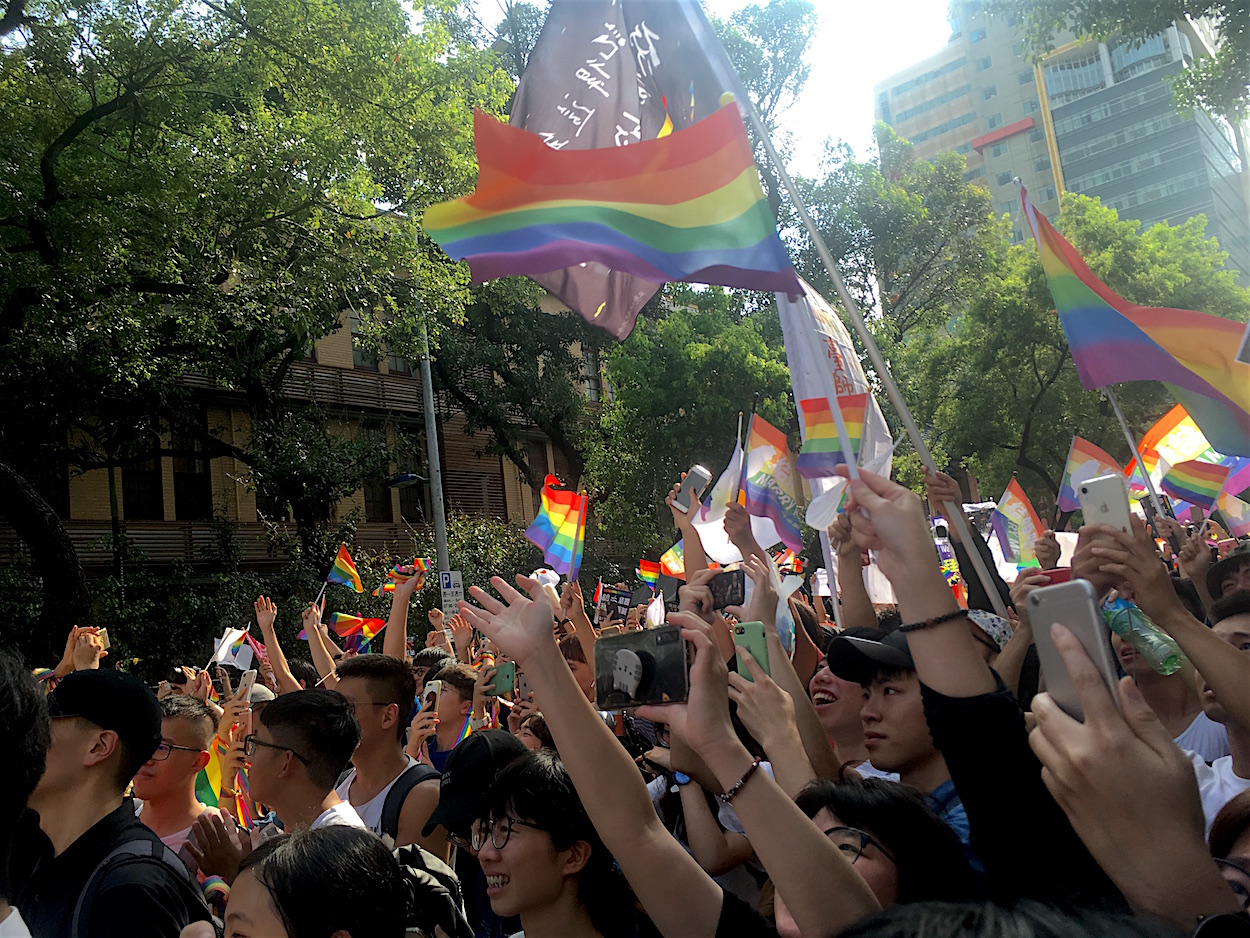 Nevertheless, the historic first set of gay marriages in Taiwan will move forward in the coming days. After the president of the Legislative Yuan, Su Jia-chyuan, rang the gavel after the third reading of the bill, the crowd chanted “First in Asia”. A mass wedding is scheduled to take place on May 25th on Ketagalan Boulevard, one day after the bill is scheduled to take effect on May 24th.

Will There Continue to be Stalling on Adoption Rights For Gay Couples?

New Taipei Hit by Scandal Over Child Death Due to COVID