IT’S FUNNY. I thought I had nothing to write about. But then I went to the Digital Art Center (DAC) for Cheng HsienYu’s “solo exhibition” Closed and Renovation. Now I really have nothing to write about, and that’s actually something. You see, every once in a while it pays to read the curatorial statement before going to an exhibition. Despite all the highbrow pretension the statements usually offer, now and then there is some practical information. For example, if I had read beforehand, I would have learned that “This exhibition is all about the process of renovation and refurbishment. Without actual or solid artworks, the exhibition is going to present the busy and noisy renovation site and process.” And, that “The artist is invited to re-plan and modify the exhibition space with limited resources.” 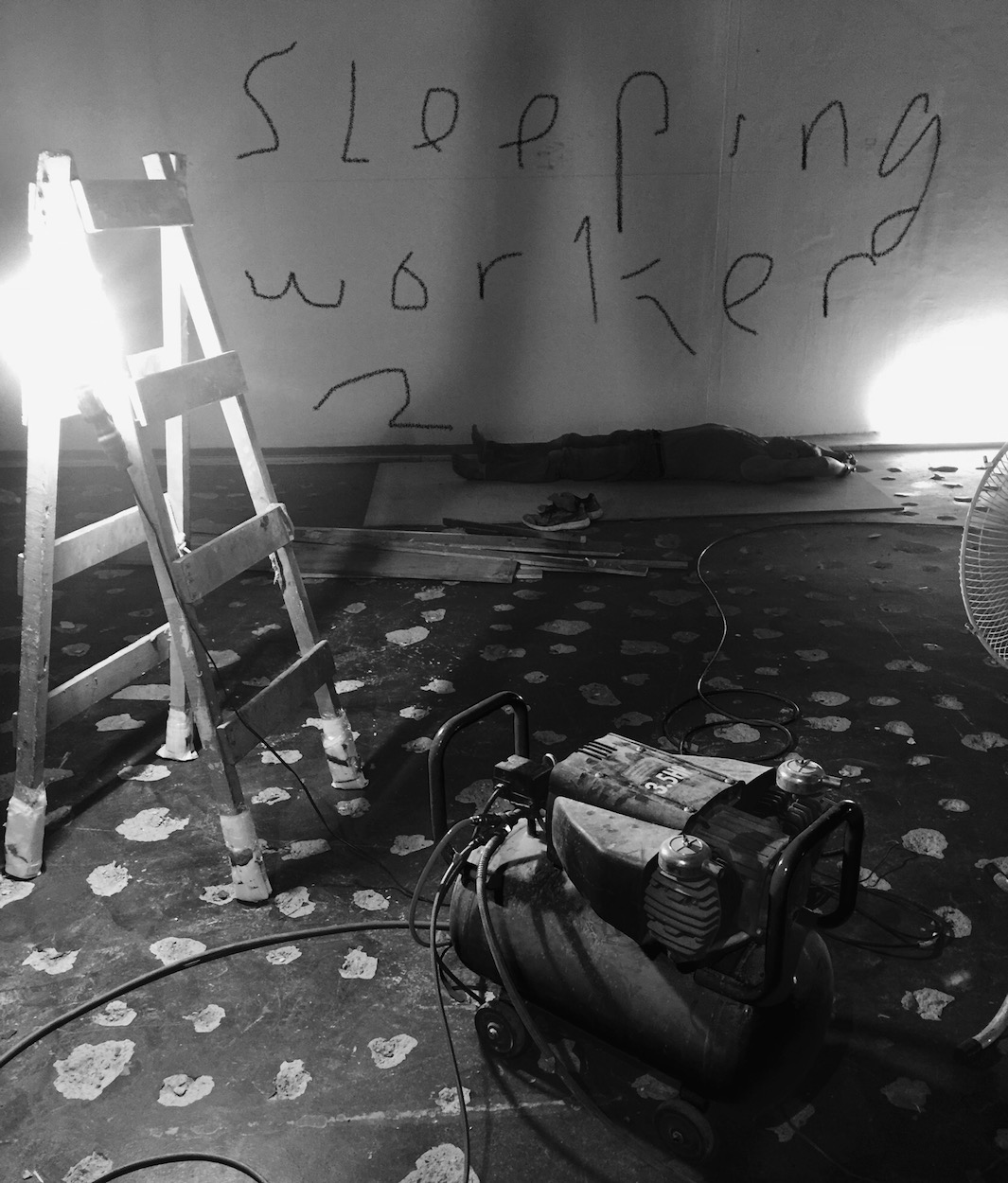 So, what exactly does this mean? It means that DAC is renovating their space and HsienYu, an artist, “is invited” to do it. To have their cake and eat it too, it is being called HsienYu’s solo exhibition. Just that the solo exhibition has no art, because it is actually a renovation job. It’s all a matter of perspective, of course. If we say, for example, we are going to invite a plumber, as an artist, to fix our toilet, then it can become a solo exhibition for that plumber. It’s almost Duchampian, except that it isn’t already made and it isn’t being called art. So it’s a job. 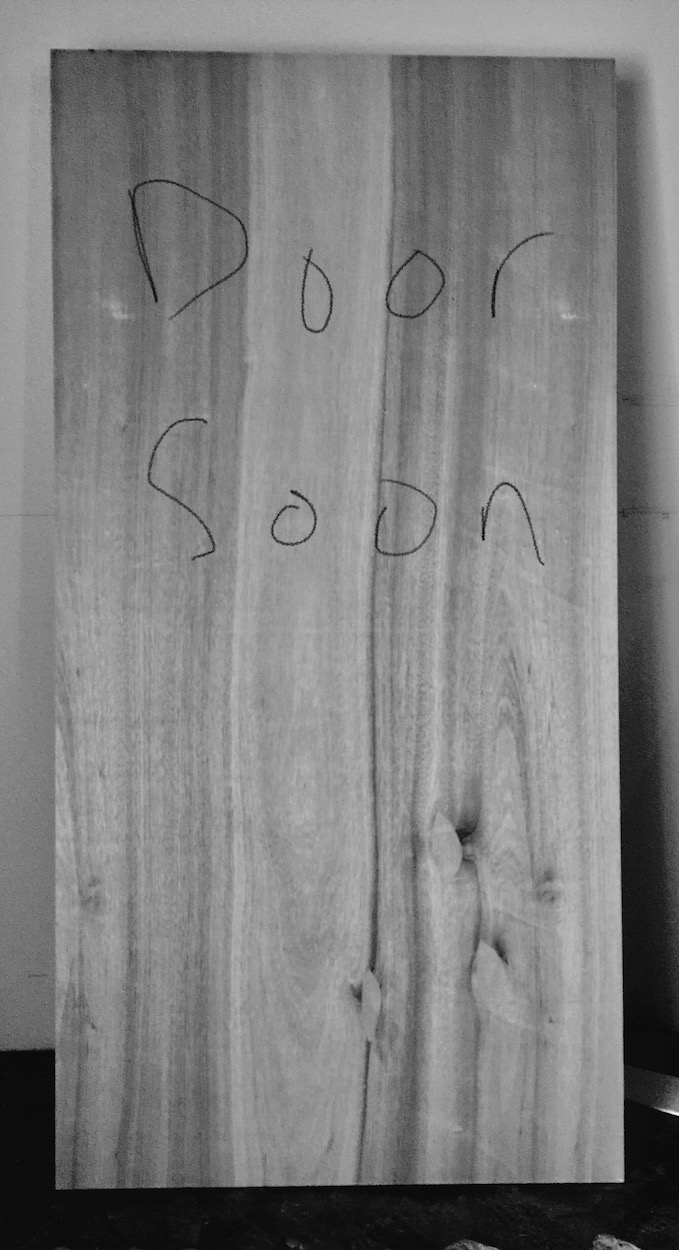 Alas, I did not read beforehand, and went to the exhibition unaware of this clever artist/worker renovation/exhibition switcheroo. Sure enough, when I arrived it was really under renovation, and there was no art.. or was there? Just because I didn’t read the curatorial statement doesn’t make the statement true. How can such statements ever be true when they are conceptual explanations of art, which is itself a concept? Plus, by its own logic there cannot not be art—otherwise it would just be a renovation project with no artist and then no curatorial statement about the artist’s solo exhibition. The switcheroo must work in both directions. Suddenly it hit me—of course I didn’t just stumble into a construction site—this is an exhibition. Maybe it’s all art after all? I had—how unartful of me. 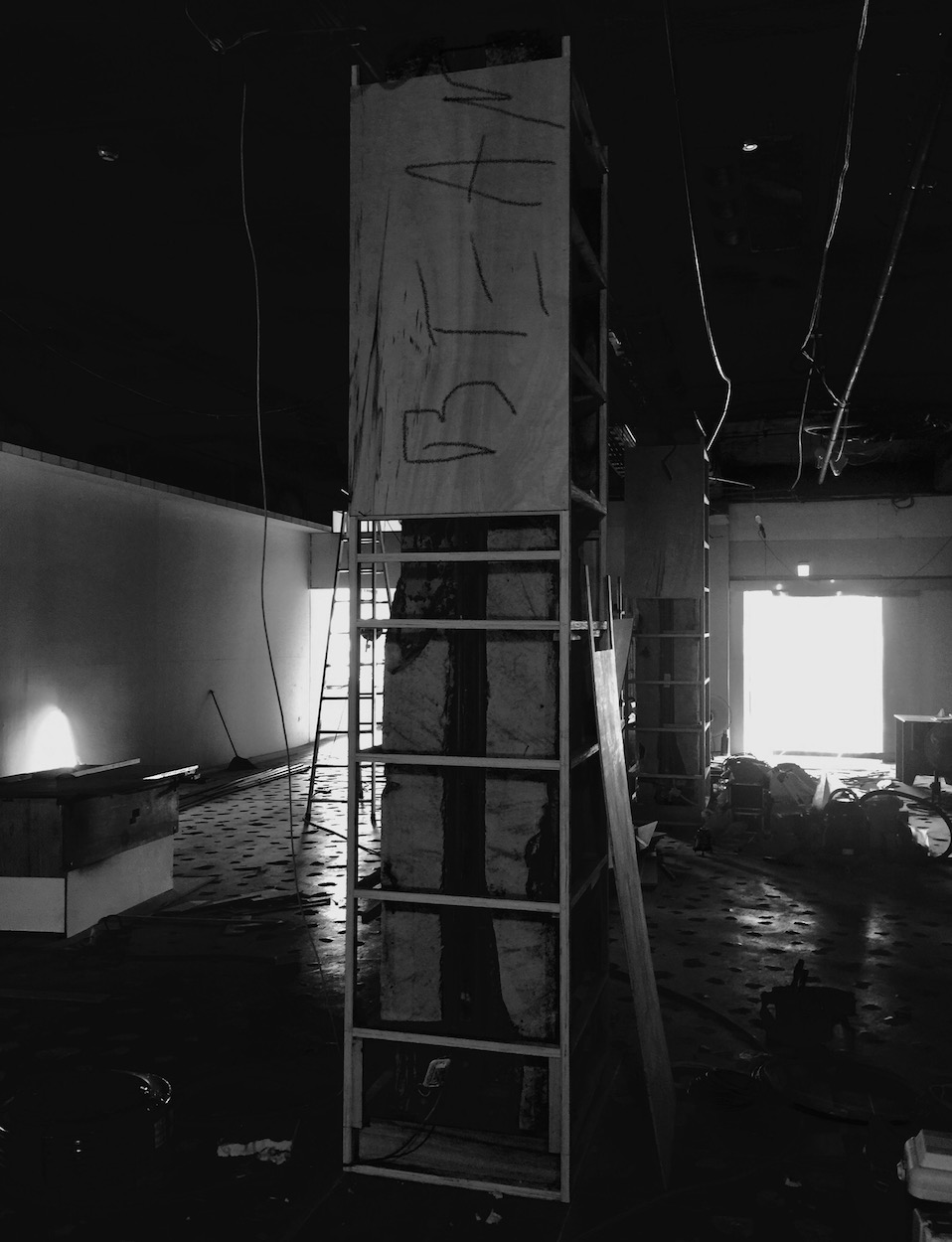 I am now going to describe the art I saw, as I believe that’s what people try to do when they go to an art exhibition believing they are going to an art exhibition. When I first arrived, sure enough, there was an open door with construction workers going in and out and tools and materials all over the place. I entered the exhibition space to behold it all more closely and noticed that some of the workers seemed affected by my presence. One looked at me quizzically, while another was more surly—saying “Sorry” with clear annoyance more loudly each time he walked past me carrying heavy loads. 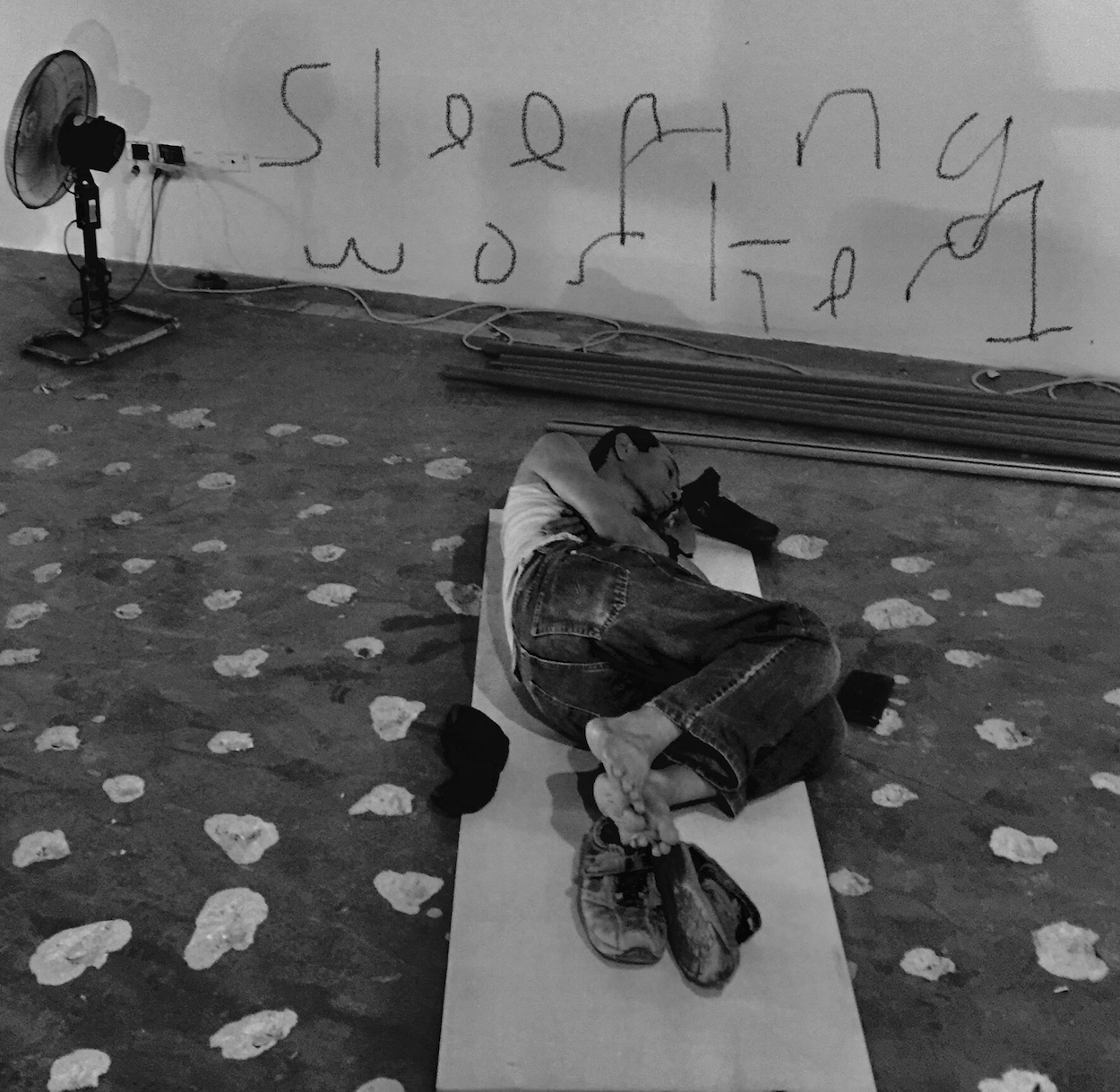 Confused and sure I was somehow mistaken about the exhibition, I quickly exited the space. Did I misread the opening hours? No, that wasn’t it. Then it occurred to me—this exhibition is so real, so “without actual or solid artworks”, that it is supposed feel exactly like if one had walked uninvited onto a construction project and bothered a bunch of men while they were trying to perform labor. Don’t be intimidated by art—especially performance art, I told myself. Art is not always easy to look at. Sometimes one must be brave to truly appreciate art. With courage renewed, and after double-checking the address, name of the building, the opening hours and other details, I went back in. 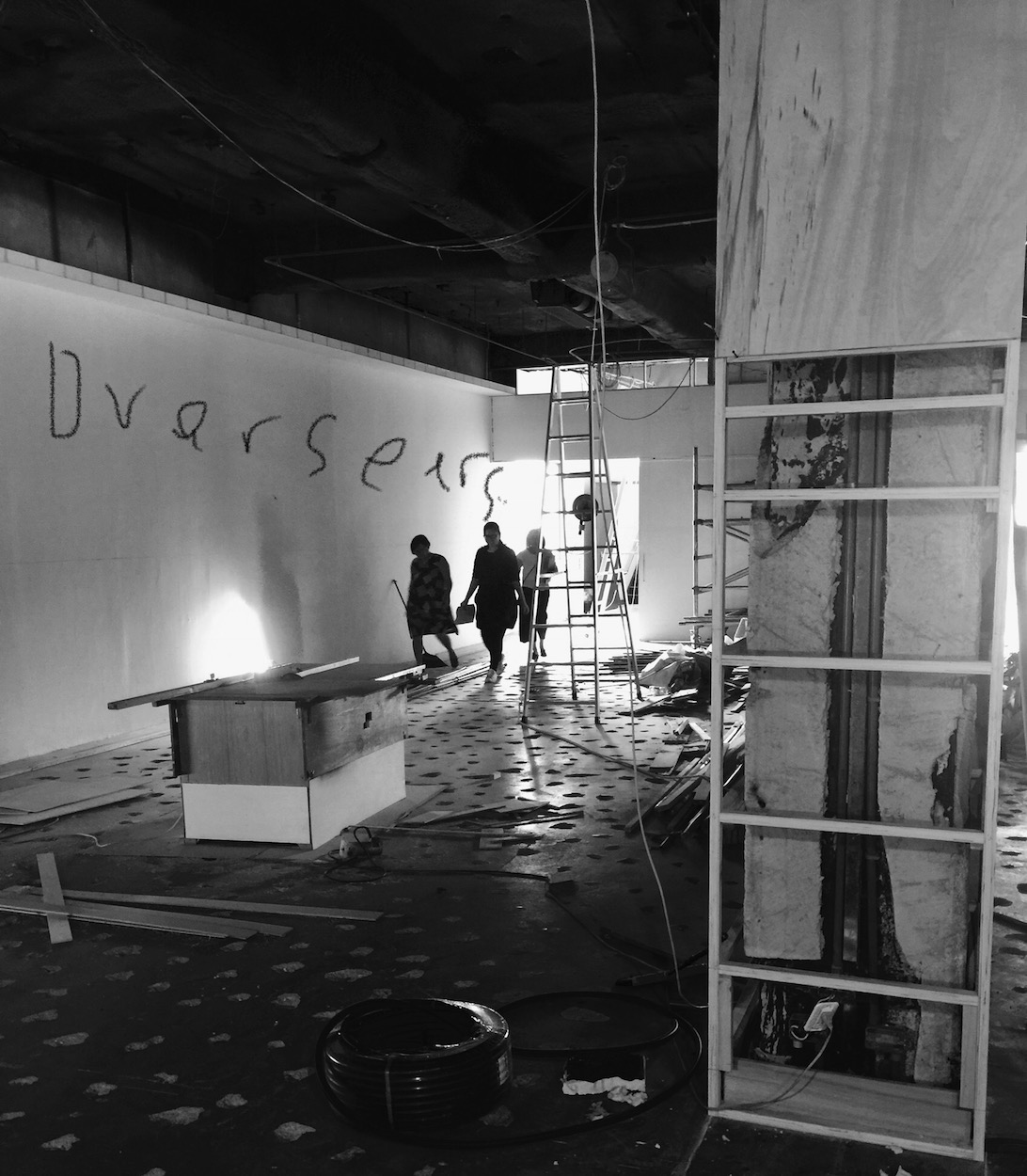 Given that I cover arts for New Bloom, I decided I should document the exhibition by taking photos of the non-actual or solid artworks that I actually saw. I would do so in black and white, with titles scribbled on them (via my iPhone), so if anyone saw them they could believe it all might have happened before the advent of digital art. I began doing so, which provoked a man to stick his hand in front of my camera to prevent me continuing any further. He looked different than the other laborers because of his stylish cap, and I assumed he was an interior designer. “What are you doing?”, he asked. I thought this was the most impressively real experience I had so far—for the exhibition was so real and non-actually artwork, that the artist never told the workers that they were in an exhibition. If they did, then maybe they wouldn’t act real and really renovate the place.

“I thought this was HsienYu’s solo exhibition,” I said. The man and I looked at each other in confused amusement for a short while. Then a smile came over his face. He introduced himself and informed me that indeed this was an exhibition, but I had entered through the wrong door. The right door was a side door, not the front door, of course. He kindly walked me towards the correct door and we exchanged pleasantries. He asked me if I was an artist too. I had no idea how to answer the question. 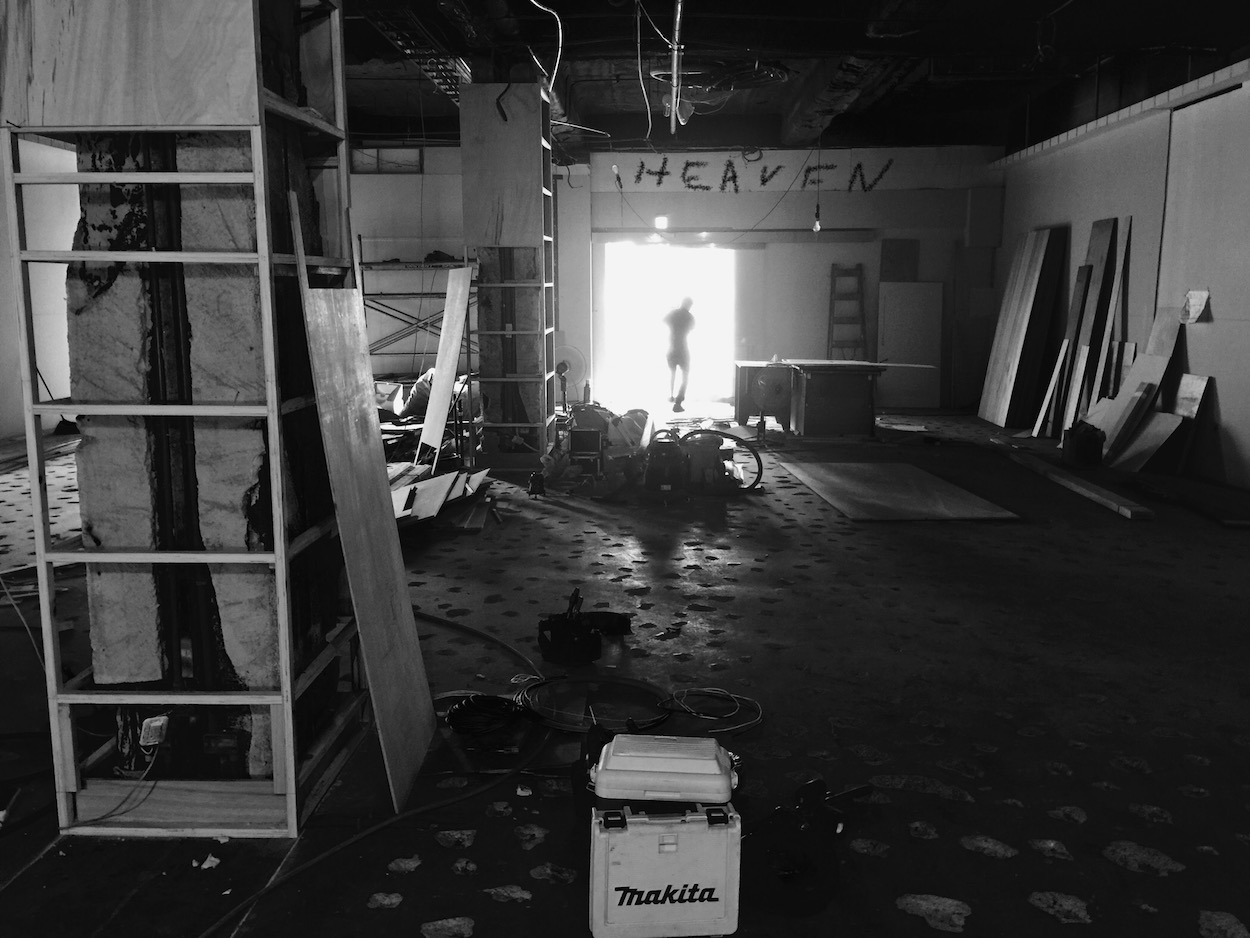 It turned out that the actual exhibition was to be observed from one of three available chairs sitting just inside the space at a doorway, with a red line divider blocking any of the lucky viewers from entering the fray. Slightly embarrassed, I thanked him and sat down in the chairs to observe the exhibition. It was just after lunch, so the workers were sleeping on the floor. I felt somewhat guilty for observing them from my chair with the red rope separating the viewer from the unwitting exhibitants. Some important-looking middle-aged women walked through carrying a clipboard. Still there observing me, my companion told me he had to go. I said bye and he walked away through the site, several times casting back uncertain looks at my likely stupefied face. He was a nice guy.

Out in the lobby was a video showing the solo exhibitor himself, HsienYu, talking, walking around the site before construction/exhibition started, and explaining some of his drawings for the renovation project/exhibition. It was probably all meaningful, but I don’t know Chinese, so I remained ignorant. Ignorance, however, can be a great way to take in art—or believe you are going to see art but wind up at an interior renovation. It’s very funny if you really think about it. 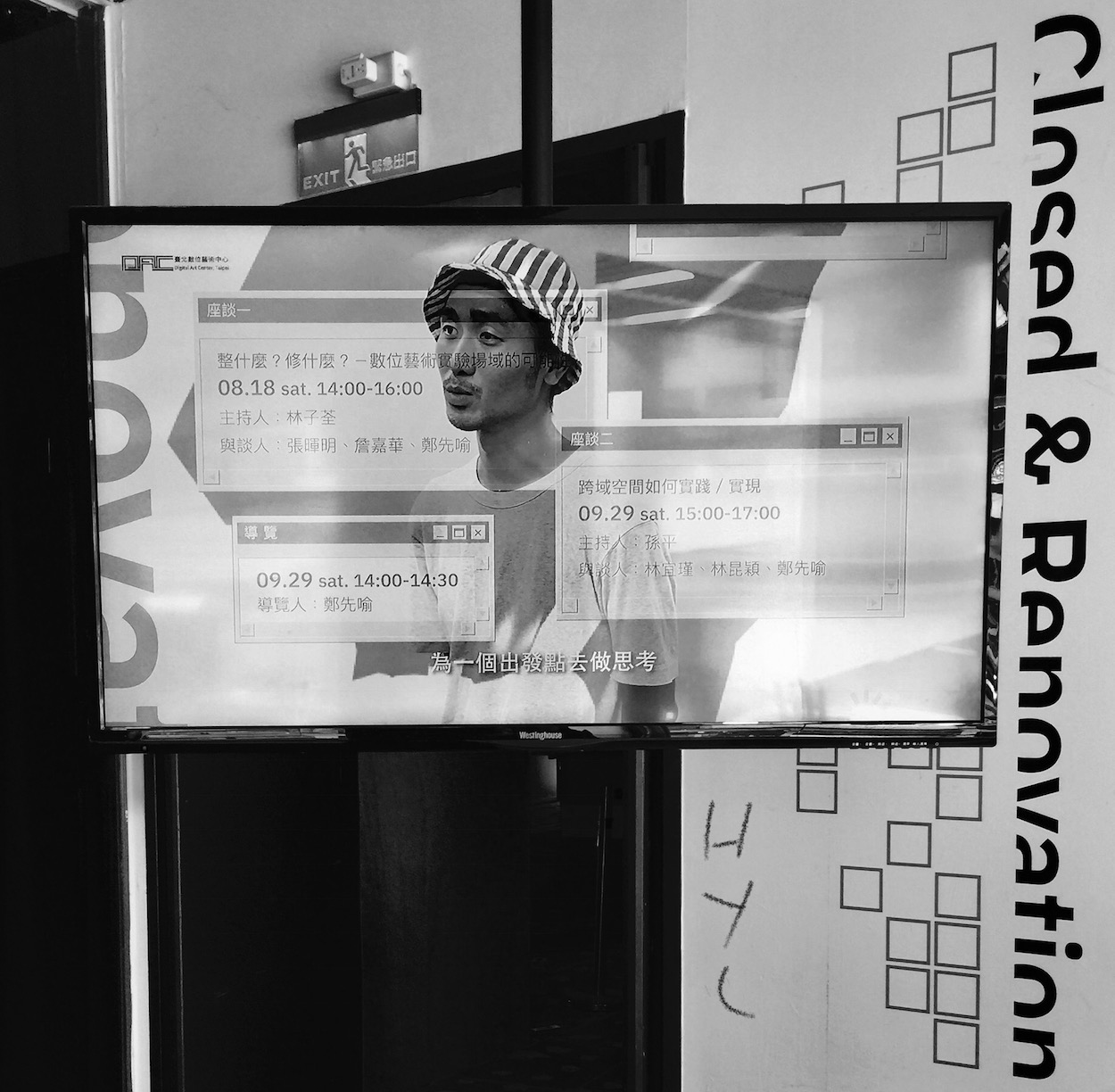 It’s also funny that a curatorial statement from an art center could justify calling a renovation job an artist’s solo exhibition and simultaneously deny the viewer that it could be considered art. But we can suppose it’s all for the betterment of everyone. DAC gets a much-needed new space for (I presume) actual future digital art. DAC also gets to claim they held an exhibition for the public the next time they ask the government for more public funds. HsienYu gets a solo exhibition on his CV.

Hopefully, he got paid too. I (the public) got to experience it and write a silly think piece (I did not get paid). Maybe except for the laborers though, who got to be intruded and looked upon while they slept on their break. According to the curatorial statement, they are not artists as their work is not “actual or solid artworks”. They get paid what they get paid, but of course, there is no price for dignity. Speaking of which, the exhibition is entirely free, and runs until September 29th. It features several public talks as well. I’m looking forward to seeing how it all comes out when they have their next exhibition. Will read the curatorial statement more closely next time.