THE BUSINESS of wild marine animal exhibitions and performances in aquariums always requires the kidnapping, torture, imprisonment, and abuse of animals. In terms of exhibitions, obviously, animals need to be captured first in order to be held in captivity. In the case of performances, unlike domesticated animals, it is practically impossible to train wild animals to perform without abusing them. This fact has been well-documented, and popular documentaries such as Blackfish have made significant strides in informing the public of such abuses. Though many aquariums do make the point of highlighting their efforts in conservation, this is usually just for show—after all, there would be no marine animals on display if they did not acquire animals by capturing them in the wild or breeding them in captivity. 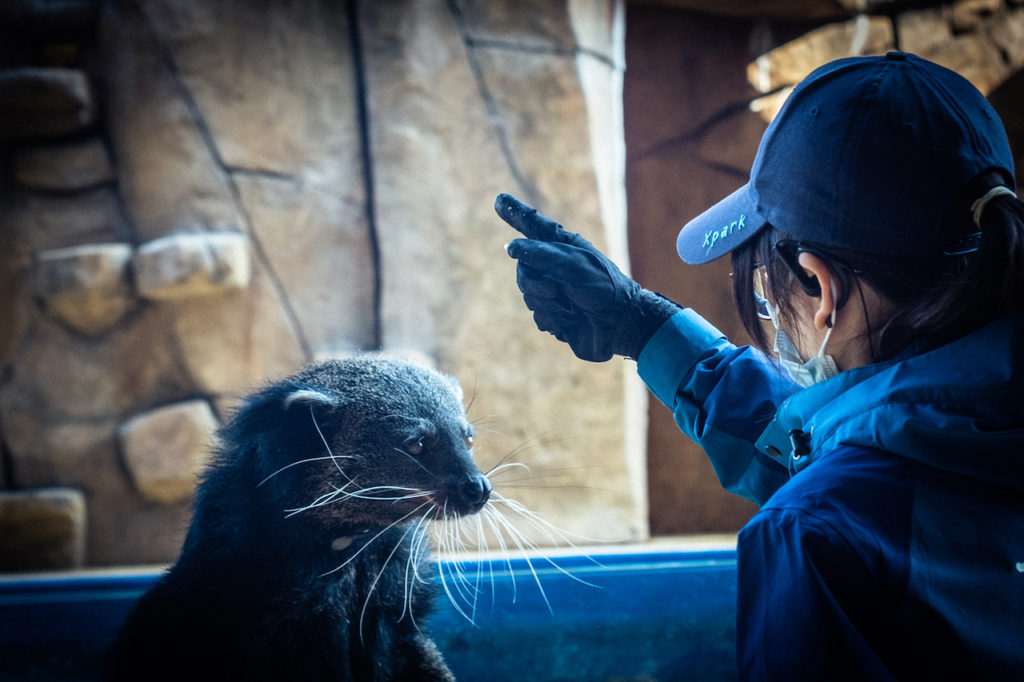 To be fair, Xpark is honest in the sense that they do not claim such lofty goals in conservation. Instead, Xpark simply wants to offer a “parallel universe” experience for its visitors. Unlike most aquariums whose standard tactic is using conservation as a front, oftentimes as a way to get public funding, Xpark is quite honest in its disregard for animal welfare and conservation in not wishing to provide a comfortable environment for its resident animals. Instead, Xpark emphasizes the animals’ “Tenacity of Existence” and wants its captive animals to adapt to the artificial environment that the aquarium has created for its spectacle: “Presenting the mystery of creatures keep adapting themselves in order [to] fit into the environment with performance….” In a time that awareness around animal welfare is on the rise globally, this honest admission for its disregard is actually quite stunning.

That Xpark is located in Qingpu (青埔), a formerly rural area of Taoyuan, reflects typical trends in Taiwanese urban development. Instead of spending money to develop the area organically and to improve existing infrastructure in densely populated areas, municipalities have the tendency to build transportation hubs away from city centers, gentrifying formerly rural areas and in the process, creating a theme-park-like area for shopping malls and attractions such as Xpark. Xpark, along with the Landmark Plaza, Cozzi Blue (part of the Cathay Hospitality Management), and Shin Kong Cinemas, is conveniently accessible by the High-Speed Rail and the Airport Line, not to mention that there is an outlet shopping mall and Ikea nearby. 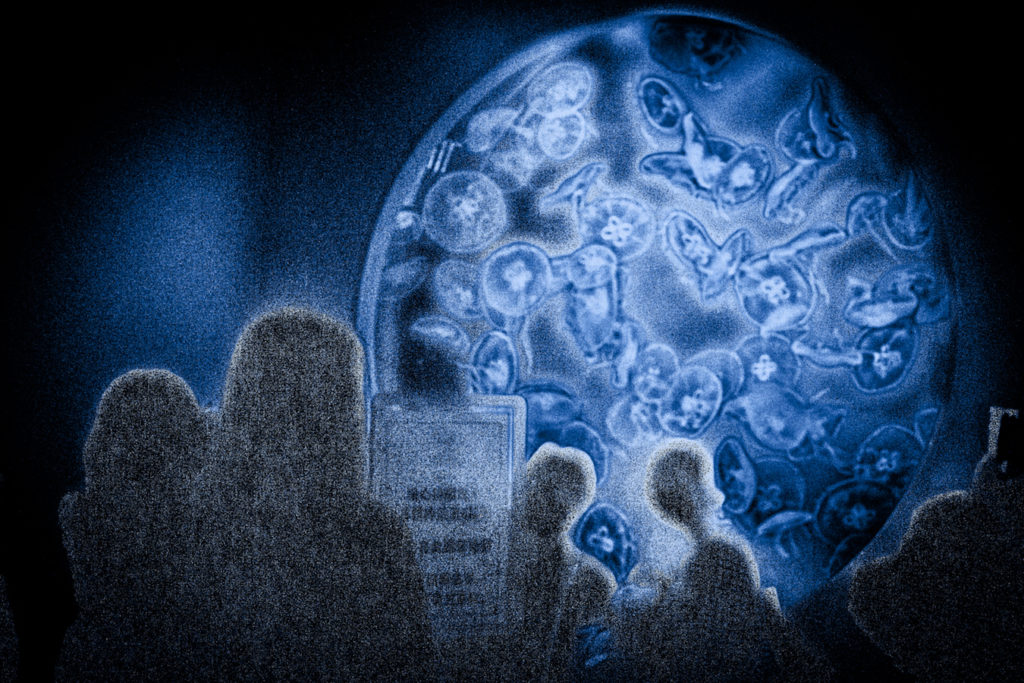 Arguably, this sort of development benefits the city by bringing in corporate investment, increasing tax revenues, and creating jobs for the locals. Moreover, possibly because of Taoyuan’s close proximity to Taipei (Qingpu is only 20 minutes away from Taipei Station), due to newly established train lines linking Taoyuan directly to Taipei, and because of various development projects, Taoyuan has seen an increase in its population, leading all major cities, while by contrast, Taipei has seen a population decline. As a result, the real estate market in Taoyuan is booming. By economic data alone, one could argue that the development of Taoyuan, particularly in Qingpu, has been a success.

However, as with other cases of urban planning of this type, such developments almost always increase income inequality and sacrifice many local citizens’ interests, housing affordability, and many other non-tangible human needs. In fact, in past years, many locals protested the government’s plan to expand the area around the Taoyuan International Airport. And the jobs that development brings in tend to be low earning jobs. For example, Xpark offers the low monthly salary of 28,500 NT for a full-time position). Moreover, there are obvious problems with development away from densely populated areas, relocating needed resources away from where people actually live in hopes of luring new residents and corporate investments. Unfortunately, in contemporary Taiwan, any criticism against development is considered heresy, since development is so sacrosanct that it’s as if Mazu decrees a booming real estate market as a basis for human existence. 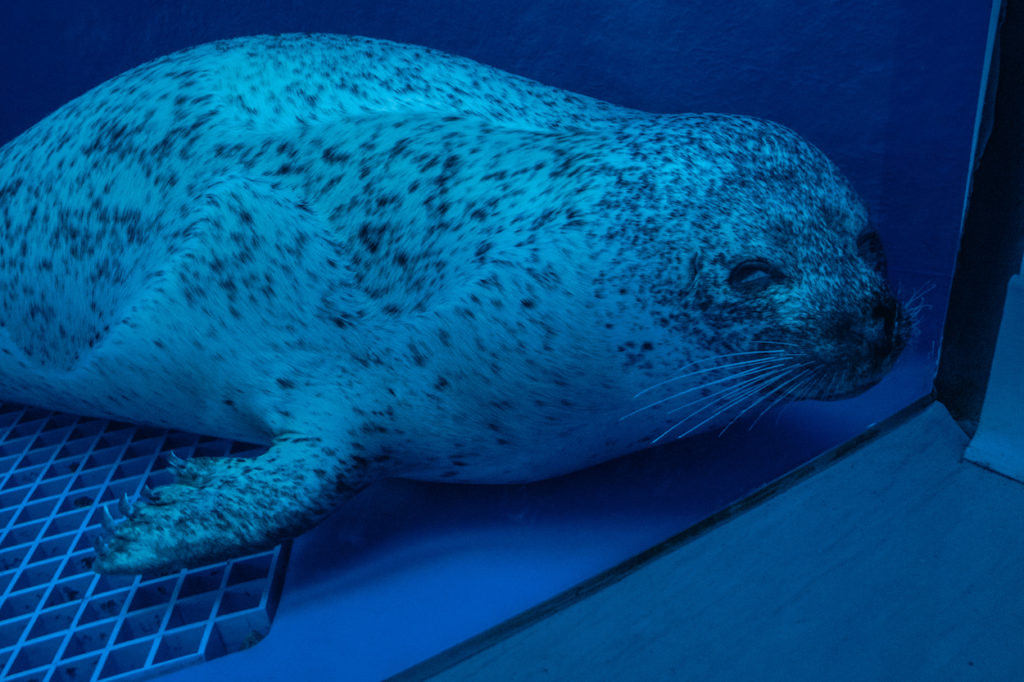 It is in the context of this very exuberance of development that Xpark plays an important role. Xpark is the Taiwanese counterpart of Yokohama Hakkeijima Inc., itself a subsidiary of the Seibu Group, a multi-billion-dollar holding company that almost did not survive the scandal that resulted from the revelation of financial fraud by its founder in the early 2000s and needed Cerberus Capital Management’s 100 billion yen investment in 2006 in order to restructure into its current corporate form.

Seibu Group is no stranger to the Taiwanese market—its railroad subsidiary is a sister railway to the Taiwan Railways Association, and it also has two hotels in Taiwan—one in Taipei, and the other in Chiayi. In its development of Xpark, Yokohama Hakkeijima Inc partnered up with another multi-billion-dollar corporation, the Cathay Life Insurance (國泰人壽), and invested 718 million US dollars in the project. Cheng Wen-san (鄭文燦), the mayor of Taoyuan, visited the head of the Yokohama Hakkeijima Inc in 2017, and remains a strong supporter of Xpark. 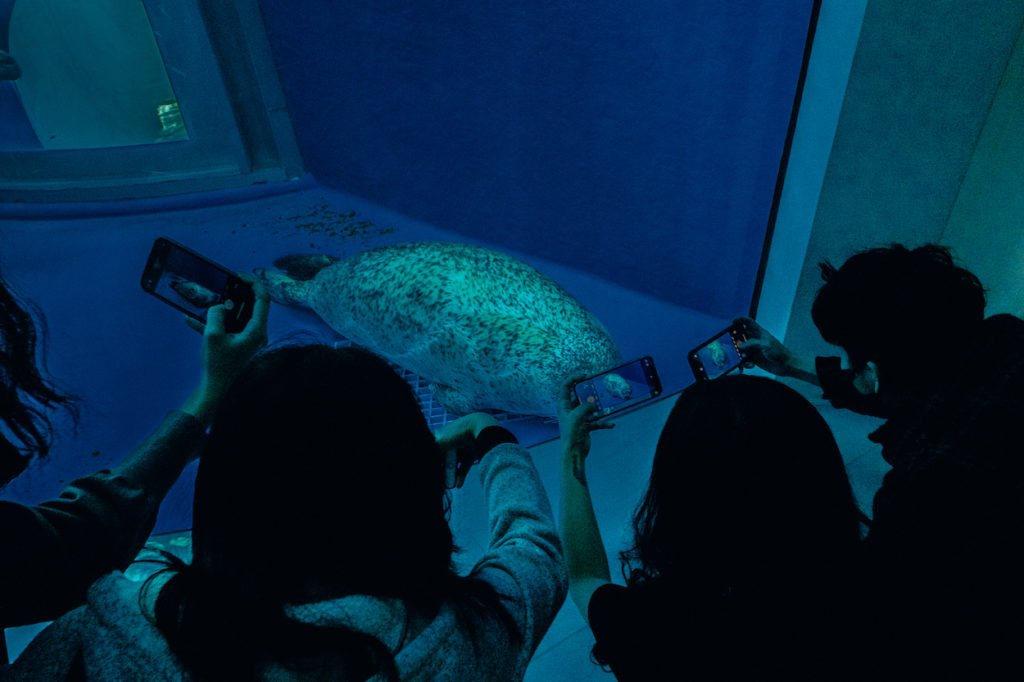 Through a “public-private partnership”, the Taoyuan Government has facilitated the construction of the park. The government also fast-tracked Xpark’s permit, shortening the evaluation period to only one month, according to information released by a press conference held by animal protection organizations—and most unusually, assigned what would normally be a public road to corporate control, including the sidewalks alongside the road. Possibly because of this close partnership, an official from Taoyuan’s Animal Protection Bureau showed up uninvited to defend Xpark at the press conference, claiming that the government found no problems through regular inspection, despite the clear evidence otherwise presented at the press conference.

That the Taoyuan mayor is a major figure in the DPP and has been speculated to be a frontrunner for its next presidential candidate perhaps may explain why the DPP did not send a representative to the animal welfare press conference about the mistreatment of animals in Xpark, organized by the Taiwan Animal Equality Association, Taiwan Society for the Prevention of Cruelty to Animals, and AnimalSkies on February 23, 2021. The other major parties, the KMT, the NPP, and the TPP all sent representatives in support of animal welfare. This is, however, not exclusively a DPP problem, as one should expect that the politicians from other parties, particularly the KMT, once in a position of power, would not hesitate to neglect animal welfare issues when it comes at the expense of development, noting how the KMT and the DPP have switched sides on the issue of American meat imports in the past. 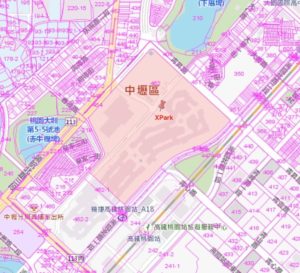 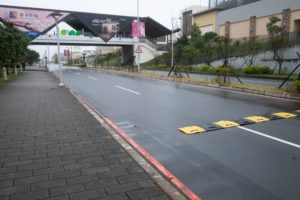 Map from the Land Administration. The orange area on the map includes a road that is under private control. The photograph is what the road looks like. It includes trees, sidewalks, traffic signs, street lights, and traffic lights yet Xpark can claim this as part of its property

As a matter of fact, the demands made by the animal rights groups at the press conference were actually very modest (the petition is here)—all they ask for is for Xpark to adhere to well-established international welfare standards, such as the standards established by the European Association of Zoos and Aquaria (EAZA) and the Global Federation of Animal Sanctuaries. According to EAZA, for example, the space provided for seals in Xpark is less than half of what is recommended. Dr. Heather Rally of the People for the Ethical Treatment also identified stereotypical behavior of seals at Xpark in the form of pattern swimming. Such stereotypical behavior should be expected given the limited space and the donut-shapes tank design that allows visitors to see the seals at all times but reserves no hiding place for the seals to rest.

Other than seals, a sting ray’s tail was so badly injured that a fish was seen eating it, and there have many other documented instances of injuries to sharks and penguins and other abnormal behavior by animals at Xpark. Furthermore, Xpark claims animal performances are “natural”, but it is well-documented wild animals are almost always treated in an abusive manner in order to coerce performance. 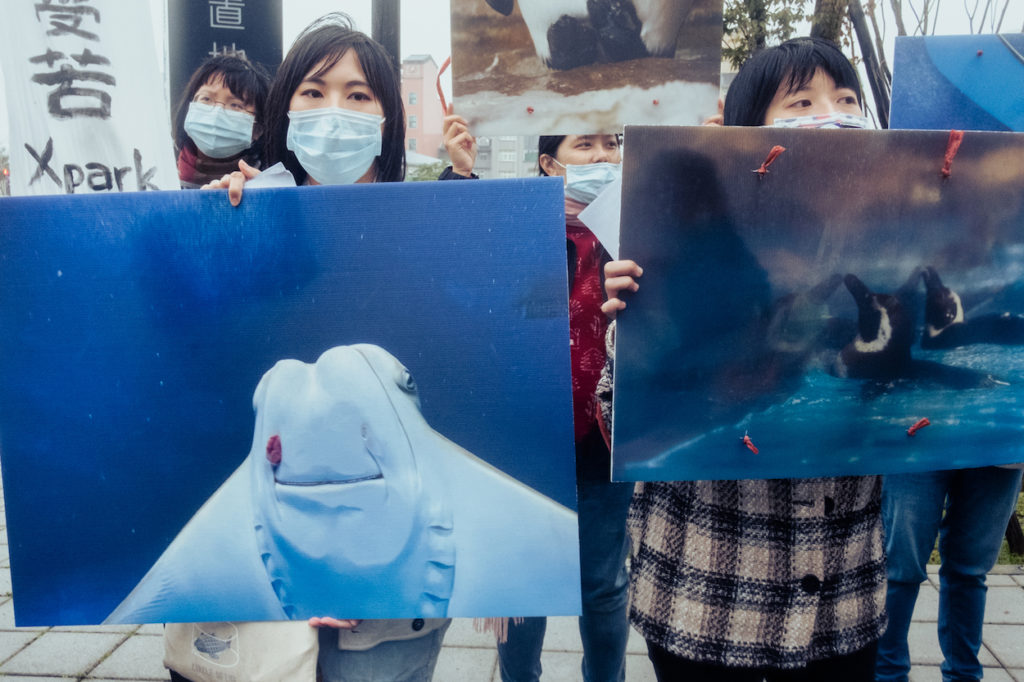 Perhaps out of frustration and embarrassment that a 718-million-USD investment could not meet very minimum standards for aquariums and bolstered by the fact that Xpark is financed and backed by two powerful multinational, multi-billion-dollar corporations and a powerful DPP mayor, Xpark’s immediate reaction to activists and animal rights organizations were threatening lawsuits.

In October 2020, reports started to surface that animals in XPark are often seen injured, and the management’s immediate reaction was issuing a public statement and threatening lawsuits. In its statement, Xpark practically threatened any netizens who voiced their concerns online: “Xpark also emphasized that…in regards to all kinds of unwarranted accusations, such as behaviors that cause harm to business, legal actions will be taken”. On December 28th, 2020, a couple of activists went to Xpark in protest. After the protest, the demonstrators were asked to stay at Xpark for the police. The Xpark staff was at first friendly, but as soon as the police showed up, an Xpark manager threatened lawsuits for income loss (經營損失) and reputation damages (名譽損害) against these individuals as well. 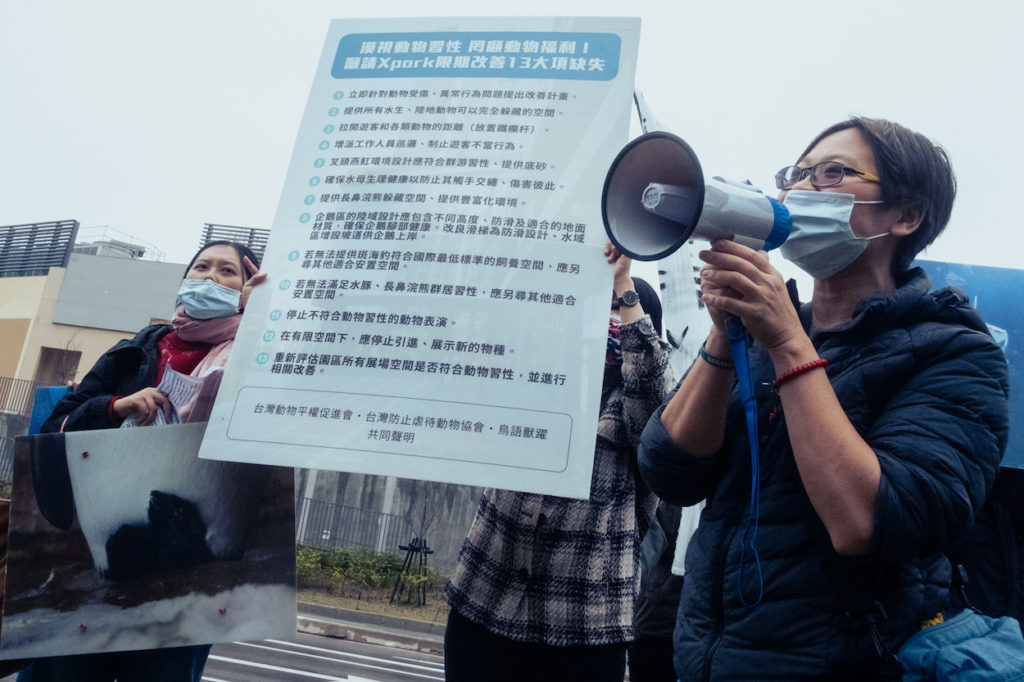 I have experienced legal threats by Xpark myself. On February 27, 2021, I went to Xpark to observe a protest, and upon arrival, I was immediately threatened with a lawsuit for standing around, taking pictures of the protest, which took place outside of Xpark. The experience felt almost surreal—after about 10 years of documenting street protests, I was threatened by a multi-billion-dollar company for photographing a relatively mild protest of some ten people holding up signs and shouting slogans.