Controversy Ensues After Detention And Questioning Of New Party Members

THE DETENTION and questioning of television personality Wang Ping-chung (王炳忠) by police, a member of the deep Blue third party of the New Party, and three other New Party members, Hou Han-ting (侯漢廷), Lin Ming-cheng (林明正), and Chen Ssu-chun (陳斯俊), has led to divided reactions from Taiwanese society. Although attention has focused on Wang, Hou and Lin are also well-known television personalities for their outspoken pro-unification views, and Chen is Wang’s assistant. Notably, Wang livestreamed police entering his home and detaining him after refusing to allow police entry into his home for over an hour until they returned with a warrant.

The four were detained on suspicion of connections to Zhou Hongxu (周泓旭), a Chinese student in Taiwan who was arrested for spying in September, and had just returned on Saturday from a trip to China with New Party chair Yok Mu-ming. During this trip, it was announced that the New Party was planning on setting up a branch office in China, although the New Party currently only has two city councillors as elected politicians who are members of its party, and no legislators within the Legislative Yuan. 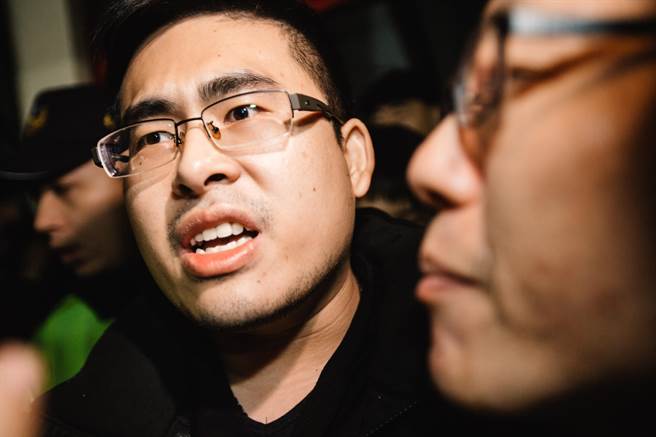 Wang Ping-chung while being led away by police. Photo credit: China Times

The pan-Blue camp has in recent times taken to accusing the Tsai administration of political persecution regarding the Tsai administration’s efforts to realize transitional justice for past crimes committed by the KMT during the martial law period, and to investigate the KMT’s illegal party assets dating back property seizures from the authoritarian era. In particular, the pan-Blue camp has accused the DPP of attempting to politically persecute it, and in that way, carrying out “Green Terror,” sometimes going so far as to claim that the “Green Terror” is worse than any actions of the KMT during the White Terror.

In reaction to the detention of its members, it is not surprising, then, such accusations have followed from the New Party. This would be through claims that the actions of Taiwanese police point to how the Tsai administration has enacted a police state in Taiwan. Seeing as China’s detention of Taiwanese human rights activist Lee Ming-Che is sometimes speculated to be in retaliation for the arrest of Zhou Hongxu, some in the pan-Blue camp have also drawn equivalence between Wang’s detention in Taiwan and Lee Ming-Che’s detention in China. China has also alleged that this is the Tsai administration arresting officials of a rival political party.

Of course, equivalents drawn by the members of the pan-Blue camp between ongoing political investigations into wrongdoing by the KMT or other pan-Blue parties and the White Terror are ludicrous. If the Green Terror is really so much worse than the White Terror, where are the tens of thousands of dead bodies of members of the pan-Blue camp in the one and a half years since the Tsai administration took office? And, it was the KMT that ran the only police state ever to exist in Taiwan.

But mixed reactions have actually followed from even members of Taiwanese civil society, with some taking the view that the DPP may be crossing a line through detaining Wang and company. Former Tiananmen Square student leader Wuerkaixi, now living in Taiwan, was among those who have called for the Tsai administration to be transparent in its actions when dealing with members of a rival political party. Likewise, National Taiwan Normal University political science professor Fan Shi-ping, himself a frequent commentator on political matters has stated, for example, that while he personally despises Wang, he also hopes that the Tsai administration has ironclad proof of wrongdoing by Wang and others. 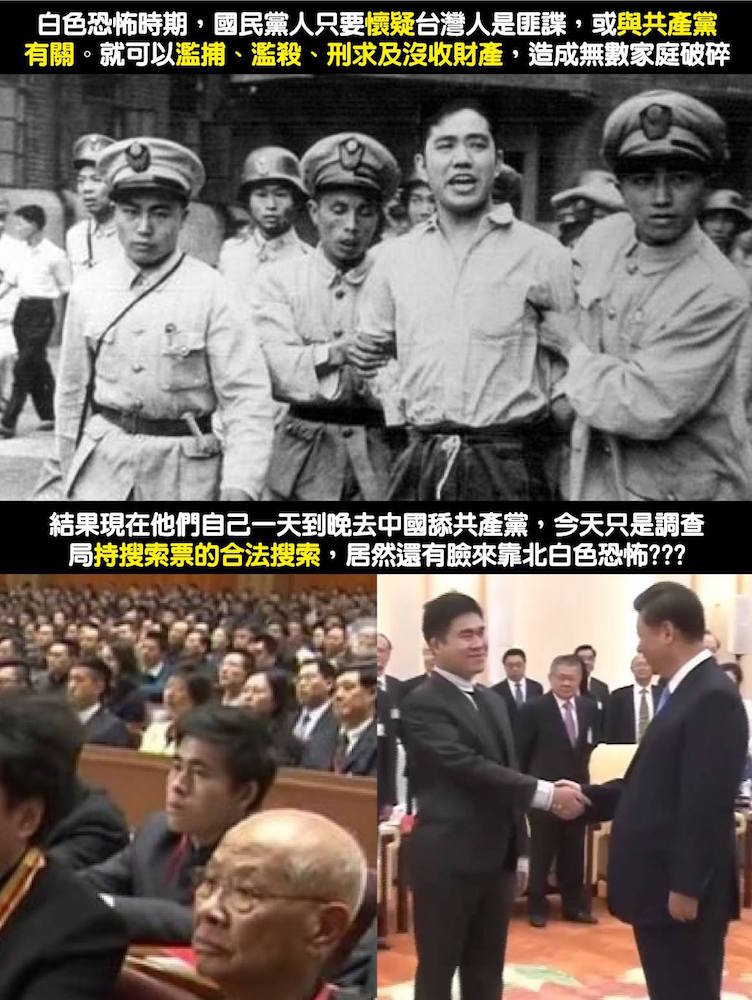 Indeed, likely there would not have been such reactions if Wang and other New Party members were not known as media personalities, whereas there would have been less reactions had they been lesser known individuals. Yet such reactions also illustrate the difficulties inherent to pursuing criminal matters related to pro-unification figures in Taiwan, seeing as when such individuals may, in fact, be guilty of what can easily be defined as treason, they can always allege political persecution from the DPP government.

After all, pro-unification views which can be construed as treason are endorsed by much of the pan-Blue camp as a whole, and just in the past decade, that has no obstacle to individuals with such views being elected to president, as in the case of previous president Ma Ying-Jeou, or such individuals running as political candidates. This leads to difficulties making a call as to when this is free speech and further difficulties when such individuals, in fact, take political action aimed at realizing the unification of Taiwan and China, which is justified as free speech.

Such challenges return to the peculiarities of Taiwan’s international status, then, in which one of the two major parties’ politics is founded upon, in effect, the ideological agenda of making Taiwan cease to exist through realizing unification with China. Likewise, such challenges also return to the challenges of transitional justice in Taiwan. A peculiar aspect of Taiwan’s democratic transition would be that the former authoritarian party of the KMT was allowed to continue to exist and individuals guilty of political crimes during the authoritarian period were allowed to remain in government or to continue to serve as political actors.

And the fact that the pan-Blue camp is able to throw around accusations of a “Green Terror”, with this claim gaining traction among not insubstantial segments of the public, is proof of how short historical memory can be in post-authoritarian contexts. Shortness of historical memory can seen in other contexts with the contemporary nostalgia for authoritarian times as a period of greater order and economic stability in the Philippines, South Korea, and other locations, or the resurgence of neo-Nazism in the United States in past years. Due to this shortness of historical memory, it becomes possible to draw moral equivalence between authoritarian regimes and the democratic activists which resisted them.

But, as such, it is quite correct that the Tsai administration should at this juncture tread carefully in order to avoid the appearance of political persecution of the pan-Blue camp. Mishandling the Wang case could lead to negative effects on efforts to realize transitional justice or to investigate the KMT’s illegal party assets, if this leads to public blowback against the DPP’s efforts to take the KMT to account for its past crimes in a just manner. 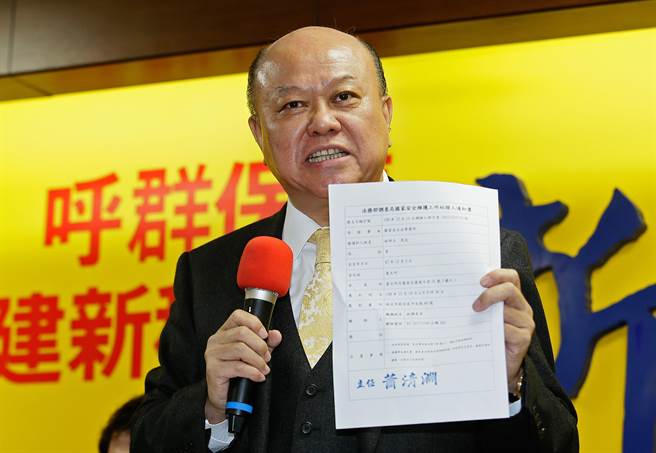 Lee Sheng-Feng of the New Party, a former KMT legislator during the authoritarian period, holding a press conference condemning the detention of Wang and company. Photo credit: China Times

What the Tsai administration should not do, at any costs, is to ignore public skepticism regarding present detention of high-profile New Party members, even if there is strong possibility of wrongdoing on the part of Wang and as high-profile members of the pan-Blue camp as former president Ma Ying-Jeou, who is currently under fire for possibly committed crimes during his presidency, and who has also alleged political persecution regarding these charges, and also weighed in on the case to allege “fascism” on the part of the Tsai administration.

The fact that the case has actually provided political opportunities for members of the pan-Blue camp has been Hou Han-ting declaring his political candidacy for Taipei city council earlier today, riding on his increased fame after the controversy. It remains a question as to how Taiwan can develop strategies to cope with this issue in the future, particularly when it comes to tackling crimes possibly committed by high-profile individuals such as Wang and company.

Nevertheless, while there was some skepticism along such lines from members of Taiwanese civil society immediately after Wang’s arrest, members of Taiwanese civil society subsequently were quick to remind themselves that there is no comparison between present actions by Taiwanese police and White Terror. After all, apart from the ironic fact that Wang probably would have been targeted by the police state during the authoritarian period for his pro-unification views as a traitor by a KMT which was decidedly more hostile to the CCP at that point in time, during the authoritarian period, there would be no publicly released information about what charges Wang was facing whatsoever. Wang could be detained indefinitely, subjected to torture, or simply disappeared, with no information released to his family about his fate. Wang could simply be secretly executed, or even publicly executed as an example, or his corpse being dumped somewhere public for other people to find. And as Miao Poya of the Social Democratic Party pointed out on Facebook, the pan-Blue camp raising questions of constitutional rights and due process with regards to Wang is ironic when they have never cared about this in the past, and seen fit to violate both numerous times.

However, it also may in fact be a hopeful sign for Taiwanese democracy that the Tsai administration was not given an easy pass for its actions. Having gone through authoritarian times and then thrown off the yoke of authoritarian rule by way of a people’s movement, the Taiwanese people are ready to call any and all political parties to be accountable for their actions, instead of blindly placing their faith in one political party over another. It also proves a check for problems of police unaccountability that Taiwanese society does not immediately jump to believing the police, but is conscious of the times in which police overstep their authority to violate the law or themselves may be corrupt or beholden to political interests. This is refreshing, seeing as for so many decades under martial law, the actions of Taiwanese police or legal authorities were unquestionable by members of the public, as also observed in numerous incidents as recently as under the Ma administration. 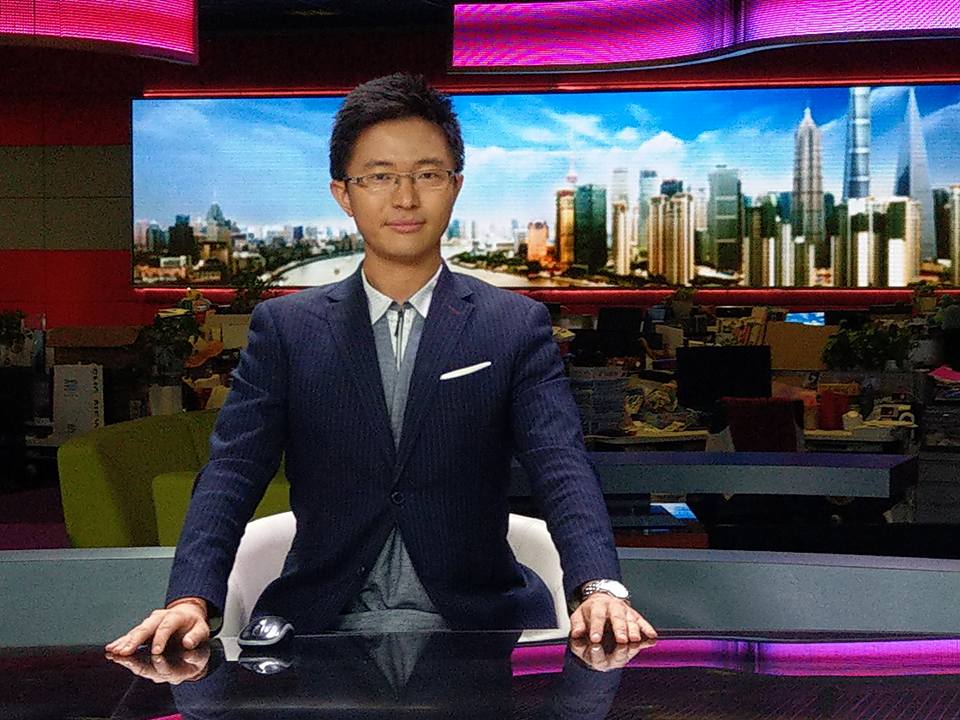 It is in fact this, which leaves one hopeful that Taiwan will not succumb to post-authoritarian nostalgia in the future, as is a risk in other contexts. Perhaps, then, even if the specter of a “Green Terror” may be absurd and unfounded, the precise fact that there is such wariness on the part of the people is what would prevent in fact another White Terror or terror of any other color from taking Taiwan in the future. Yet hopefully such fears do not allow individuals who have committed wrongdoing to evade their crimes either.