Lin Fei-fan: On 228, I Choose To Stand With Taiwan’s Indigenous Peoples

On 228 Peace Memorial Day, prominent members of Taiwan’s indigenous communities demonstrated against the Taiwan government’s plan to exclude privately-held land from a draft regulation that defines traditional indigenous lands. Sunflower Movement leader Lin Fei-fan joined their protest march from Ketagalan Boulevard to 228 Peace Memorial Park on February 28th. Lin posted the following message to his Facebook page after the march, which is reprinted and translated with his permission.

TODAY, ON 228 Peace Memorial Day, I choose to stand with Taiwan’s indigenous peoples.

Recently, because of schoolwork, and also because of my plans to go abroad, I have rarely participated in public events, and have also turned down various interviews.

On this 228 Peace Memorial Day, there is a wide range of activities and events, from northern to southern Taiwan. I had originally thought I could perhaps quietly participate in a couple of commemorative events. But in the end, I chose to stand with my friends from the indigenous community, and marched from Ketagalan Boulevard towards 228 Peace Memorial Park. 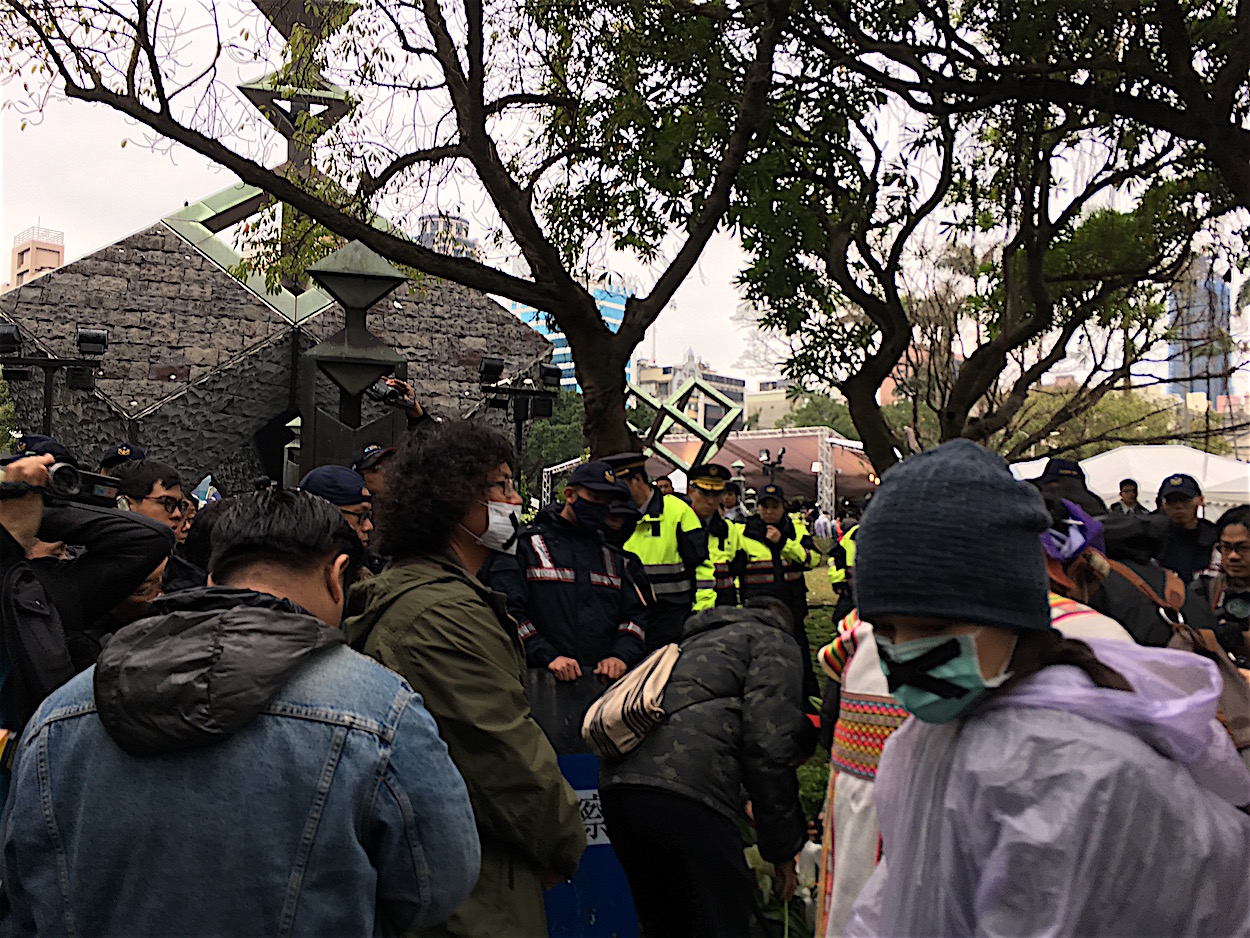 Those who don’t understand the march might assume these indigenous had come to make an unnecessary commotion. If they were to think more maliciously, they might assume these people were once again being used by the Chinese Nationalist Party (KMT), and were there to block the ruling Democratic Progressive Party (DPP) from exercising governance.

But to put it bluntly, the mainstream discussion surrounding 228 and transitional justice rarely leaves space for Taiwan’s indigenous peoples.

As police surrounded our friends from the indigenous community outside the gates of 228 Peace Memorial Park, an elderly Taiwanese independence supporter inside the park snidely remarked, “Sure they hold lilies in their hands, but the native Taiwanese lilies we hold in our hands represent the suffering endured during 228. This is all just some irrational protesting.” 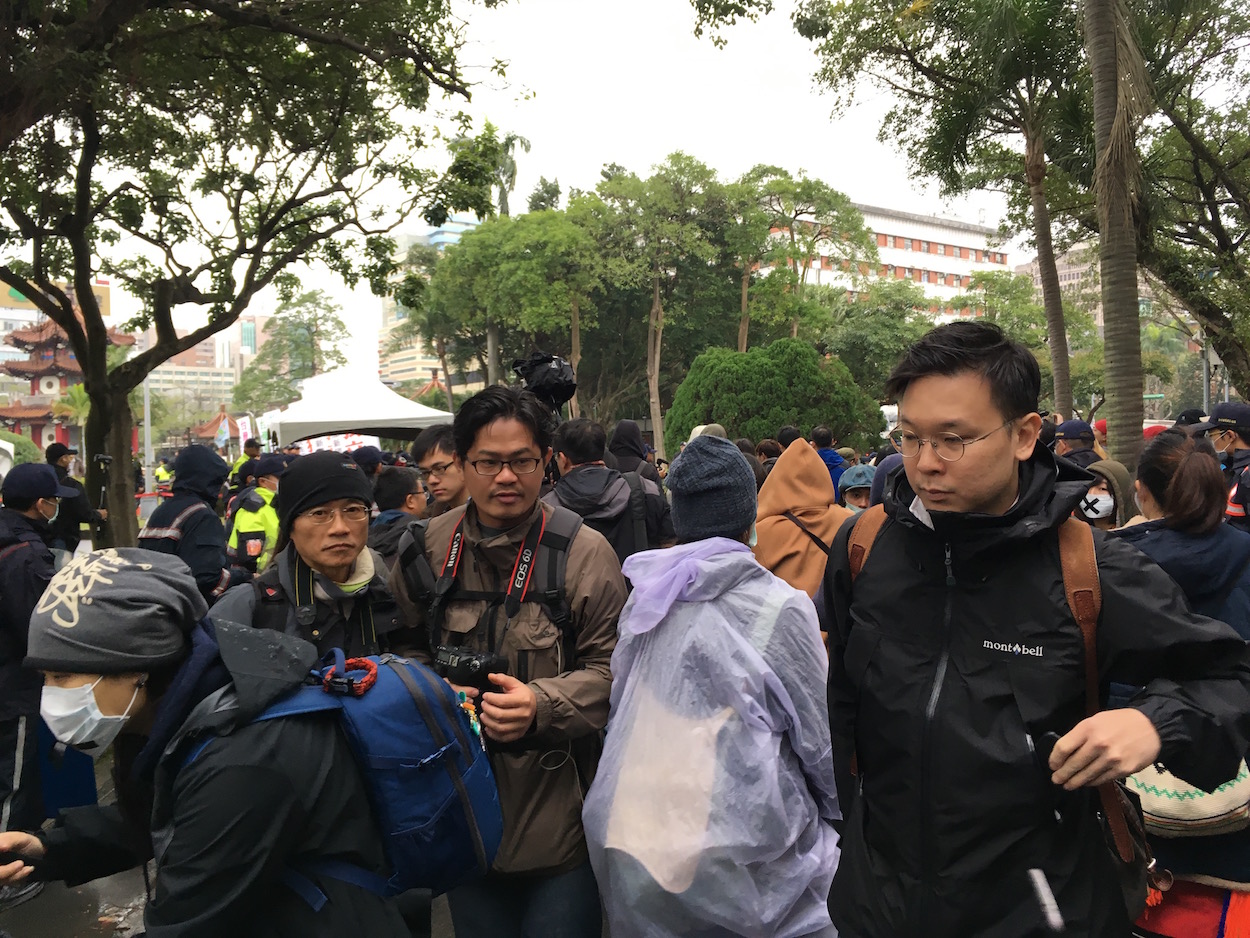 Shortly before at the press event on Ketagalan Boulevard, people passing by who didn’t understand the protest made kicking motions towards their protest placards.

Seeing and hearing this makes one incredibly sad.

Some people may believe that because the process of putting transitional justice into practice is so complex, we shouldn’t be putting indigenous issues into the mix.

However, it’s precisely because of these seemingly flimsy and thoughtless opinions, or these demands that seek the best possible results for only one group in particular, that the space for indigenous issues is continually restricted.

WHY ARE TAIWAN’S indigenous peoples protesting? What do they oppose?

These actions were not clearly understood by some Han people in Taiwan, but in general, were still met with applause. As for indigenous peoples in Taiwan, it appeared as if a new door was being opened. After 400 years of bitter history experienced by their ancestors, an opportunity had arisen to move in a new direction. This is exactly why this late but rare apology was met with high expectations. 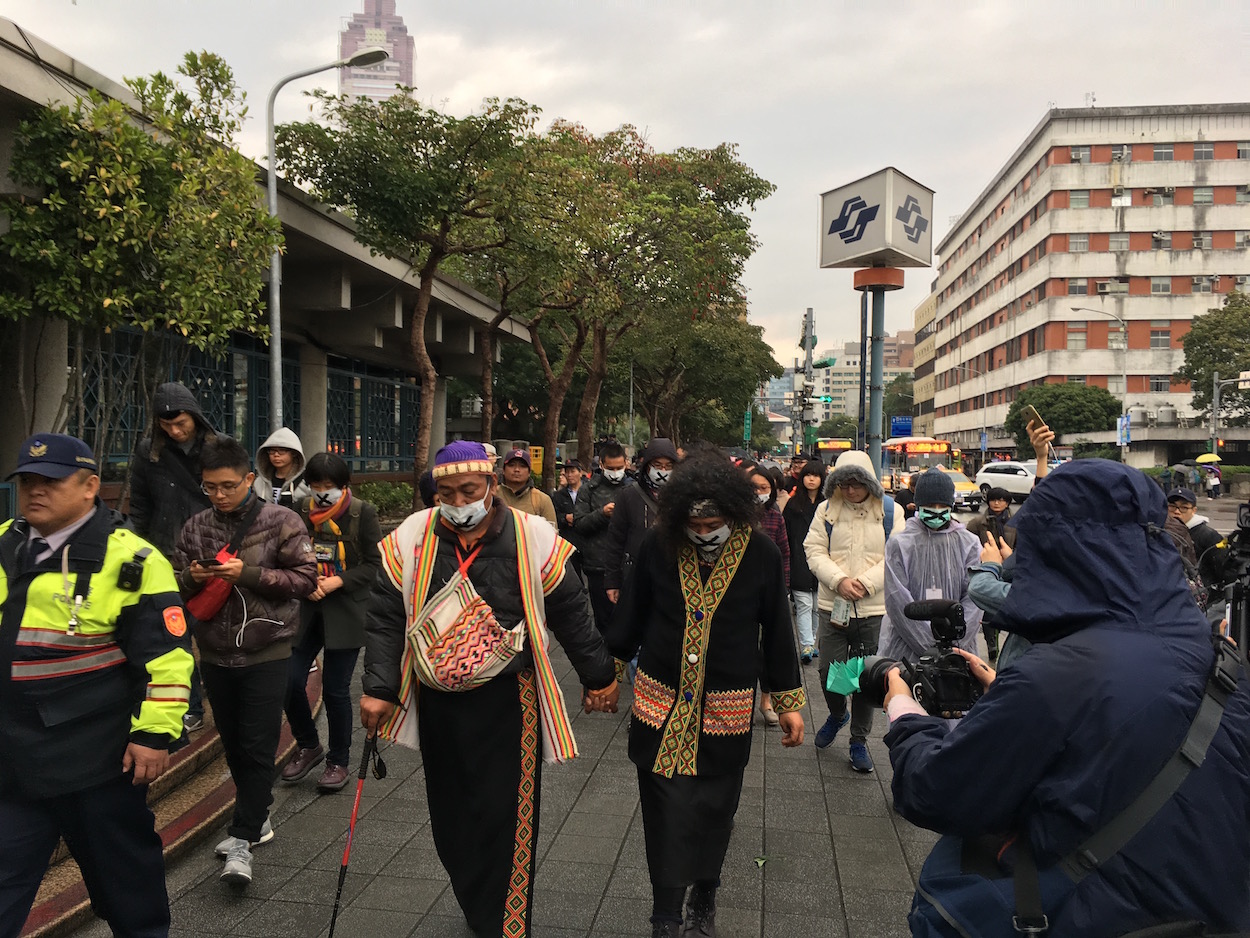 But this February 14th, on the eve of 228, the Council of Indigenous Peoples — the governing body for Taiwan’s indigenous affairs, a body appointed directly by the Tsai government—announced that the draft regulation for establishing traditional land boundaries for indigenous peoples would be decided in accordance with the constitution’s stipulations on the protection of private property.

As members of the Bunun community returned from their annual pilgrimage to rejuvenate their ancestral home at Laipunuk, they had learned that the situation had become quite severe, and immediately arranged for a press conference to be arranged on February 23rd. They called on President Tsai to return traditional lands to indigenous peoples, and to honor her commitment to implement indigenous transitional justice. They also demanded Minister Icyang Parod of the Council of Indigenous Peoples to step down for betraying the people’s high expectations. 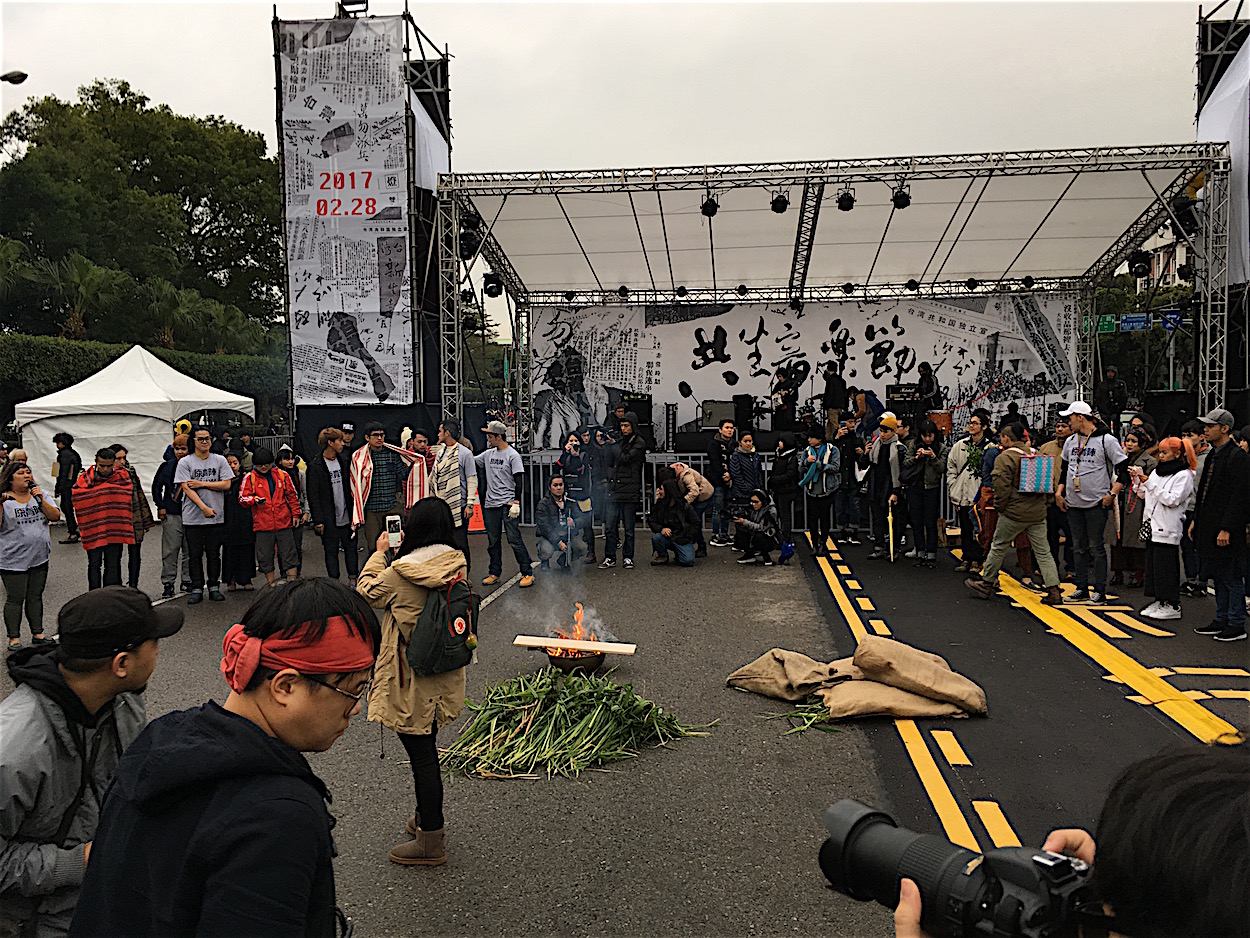 In the end, the specious response from the Council of Indigenous Peoples wounded the hearts of the people deeply, declaring that the new draft regulations would after all, increase traditional indigenous lands from 0 to 800,000 hectares.

“We won’t leave before we receive a satisfactory answer,” they said. As I heard these words, I actually thought to myself, it would be better to take a more flexible approach, instead of tying themselves to Ketagalan Boulevard. But they’ve always stood firmly by their word, and that’s what they’ve really done.

Feb 28th was the sixth day of their protest.

THE POLICE FOLLOWED them closely, all the way from Ketagalan Boulevard to 228 Peace Memorial Park. A cordon of police officers created an airtight block at every park entrance.

The police didn’t allow them to enter. The president never responded. For me, this was a familiar setting.

But what I find the most heartbreaking, is that it is so difficult to get people who share the same piece of land, to start on the same path of mutual understanding. 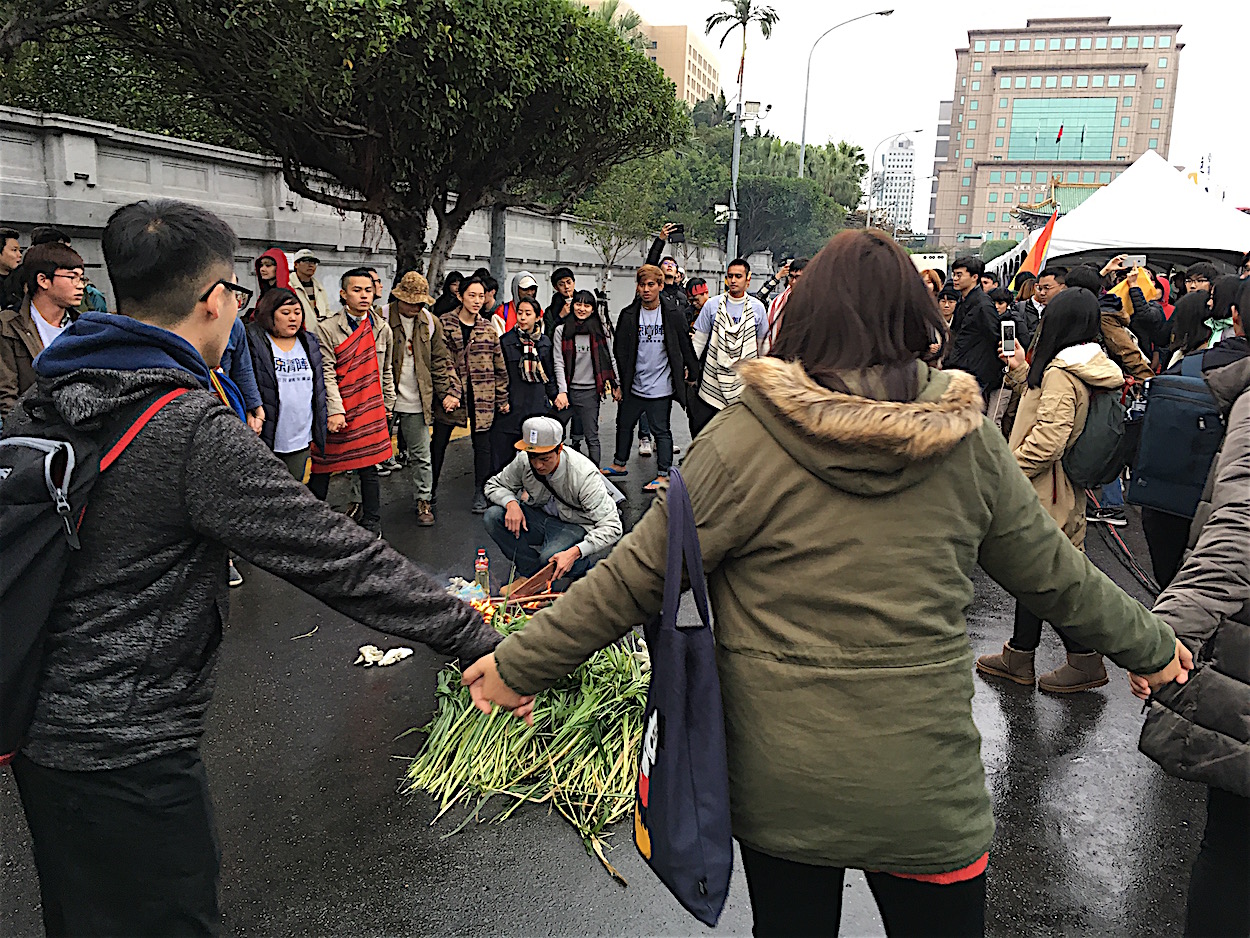 228 is a day that has left many in the depths of sorrow. The work of putting transitional justice into practice is a long but necessary task. Many people have mentioned this before. Various investigations on revealing historical facts and declassifying government files are two ways in which the public can learn more about this period of history.

But in this society, where democracy has been continuously consolidated up to the present day, there is still a group of people that face unfavorable conditions a hundred times more difficult than the average person. The way in which they are understood by society falls hundreds of miles behind those of other groups.

They cry out for transitional justice, and when our society must work out all sorts of injustice that occurred during the authoritarian period, they also hope our society can look squarely at the 400 years of oppression experienced by their people. 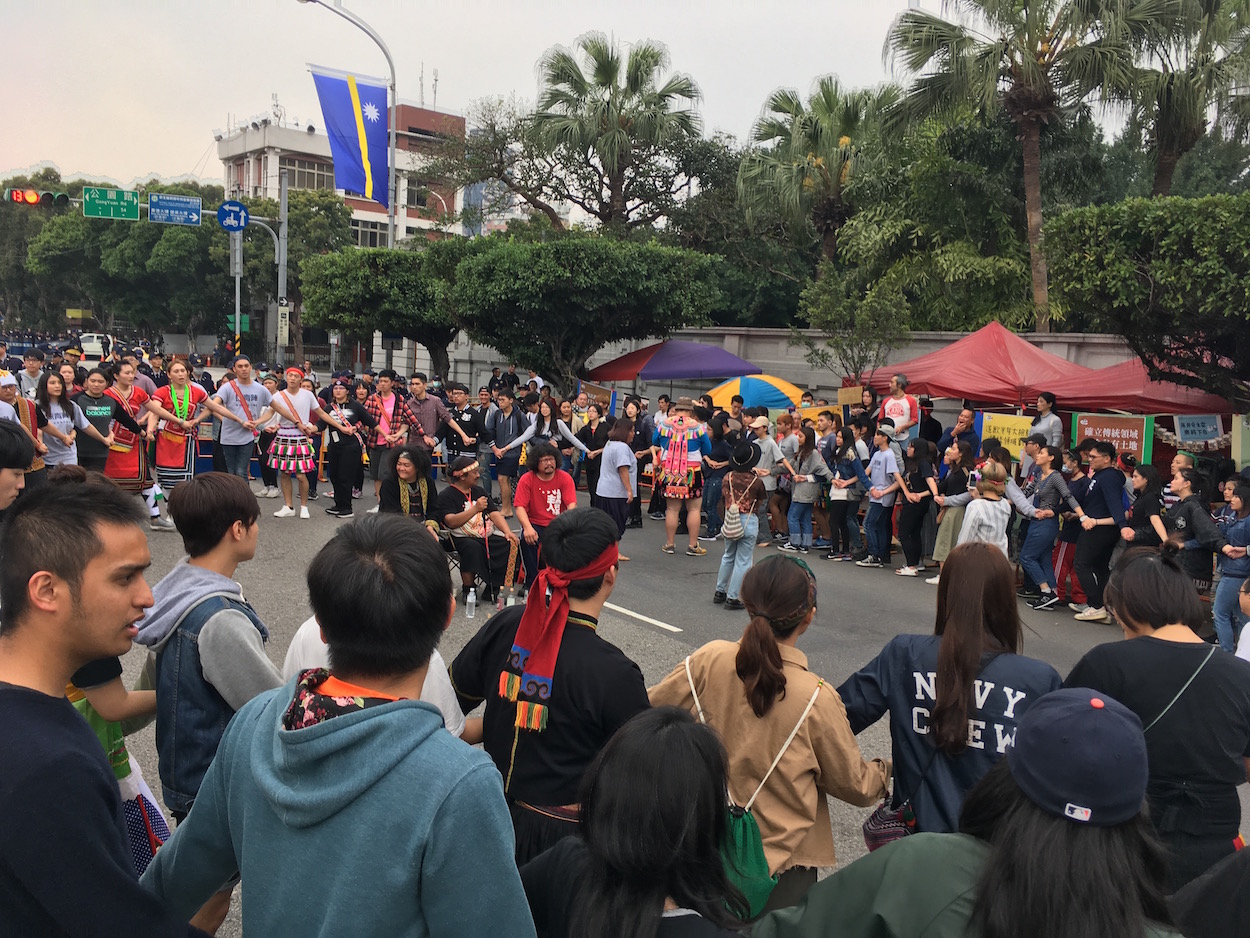 Their language and culture is continually washed away. Their traditional way of life and their spiritual values will never return. After being deprived of their culture, language and land, they have become people who have lost their roots, they float perilously within the pillars of power, and are losing their sense of selves.

Transitional justice for indigenous peoples is not a simple indigenous issue, nor is it simply their own issue.

We shout loudly for Taiwan independence, but if we’re unable to give an answer on what an independent, free, and democratic Taiwan is supposed to look like, or we’re unable to understand, face up to, and re-examine the relationship between the state and the people that live on this land, then independence is nothing but a flashy slogan. Liberal democracy and equality are nothing but illusory self-consolation prizes.

228 is an important historical event for every Taiwanese who lived under the oppression of the party-state system, and does not distinguish between ethnic groups. But the 400 years of oppression experienced by Taiwan’s indigenous peoples is still poorly understood, and rarely discussed. 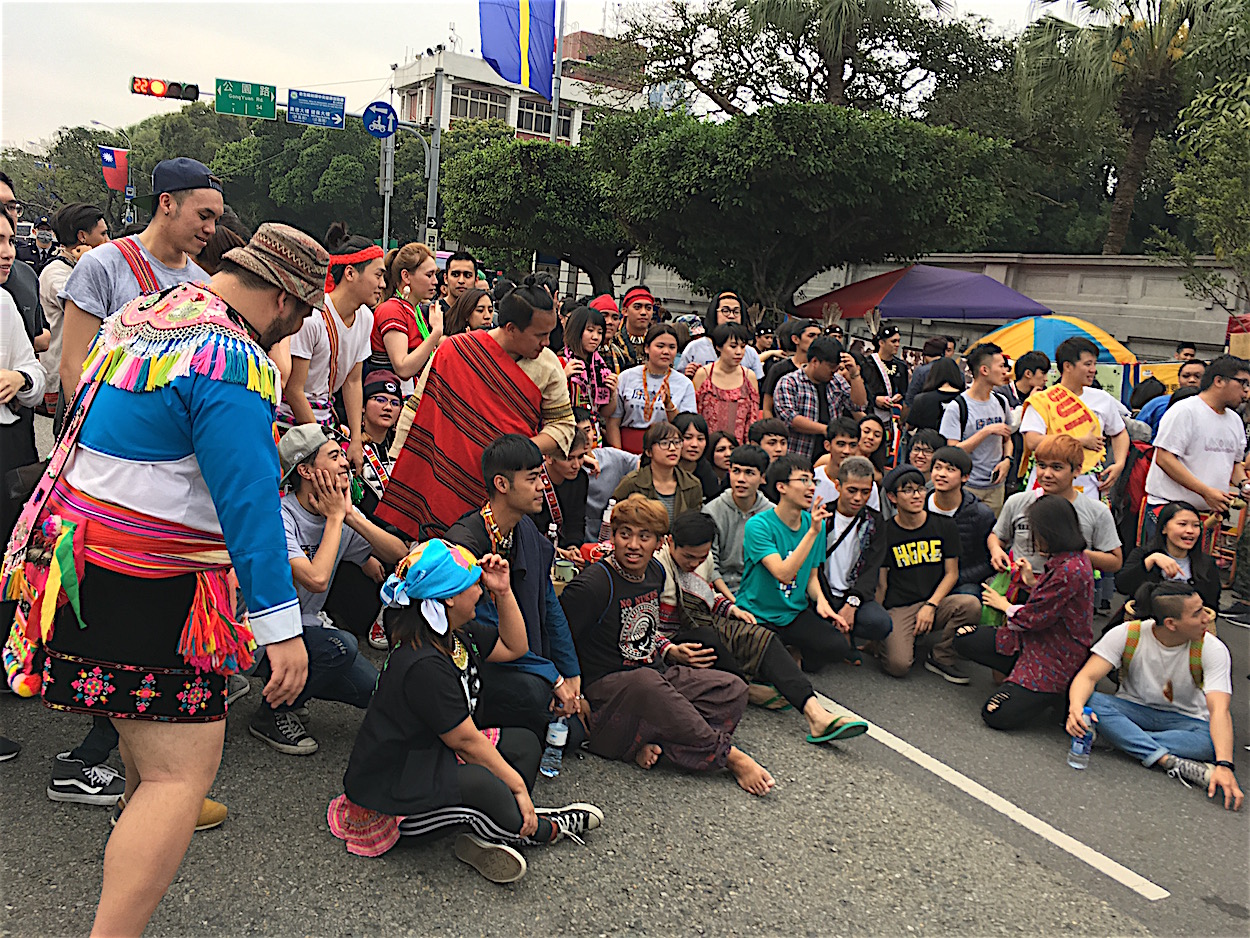 What kind of county will Taiwan become? This is a question every person who hopes Taiwan will become a country worthy of respect, where Taiwanese can hold their heads high among the community of nations, should always consider.

But if we are unable to understand the situation and oppression each group has experienced, then how can we expect the international community to understand Taiwan?