ISSUES OF URBAN evictions in Kaohsiung under Chen Chu’s mayorship continue to be an issue with a recent hunger strike by the Kaohsiung Fruit and Vegetable Market Land Seizure Household Self-Help Organization (高雄果菜市場土地不義徵收住戶自救會). The hunger strike has lasted for 165 hours outside of Tsai Ing-Wen’s private residence, with organization head Wu Fuxiong collapsing and being hospitalized after 65 hours of fasting. Demonstrators had vowed to hunger strike until they collapsed, suggesting that they might possibly continue until death by bringing coffins onto the site of their hunger strike. Previously hunger striker Tseng Wei-tang was hospitalized on October 25th.

Another scare for hunger strikers would come from demonstrator Lin Jinlian, head of the Li-Ming Preschool in Taichung, disappearing for eight hours without explanations on October 30th, leading hunger strikers to temporarily vacate their encampment in front of Tsai Ing-Wen’s residence in search of Lin. Lin was later found sitting in front of a nearby Bank of Taiwan branch muttering about how he needed to “meet Tsai Ing-Wen.” 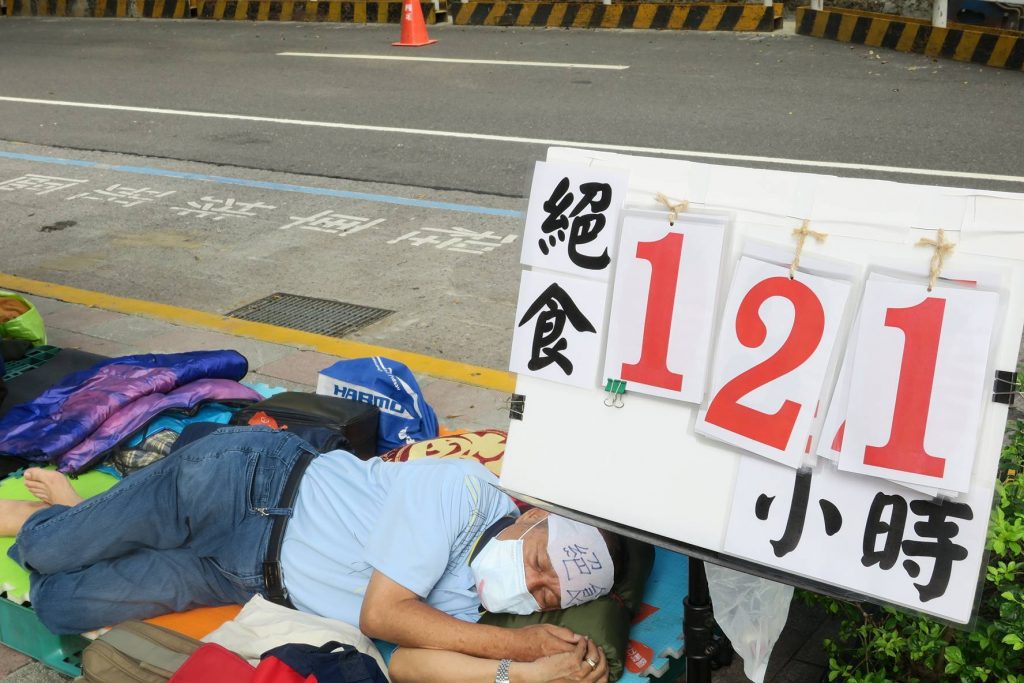 What is at stake would be the demolition of housing complexes adjacent fruit and vegetable market in Sanmin District in northern Kaohsiung. The city government claims that it plans to move the fruit and vegetable market on-site further north, which requires demolition of housing complexes. Land appropriation by the government to build the fruit and vegetable market has been contested for over forty years, beginning in 1970, with residents claiming not to have been fairly compensated by the government despite claims otherwise. Options to resolve the problem proposed in the past providing residents with new housing, an option contemplated Frank Hsieh’s mayorship of Kaohsiung in the 1990s, but Hsieh vacating his post in order to take the position of premier led to the situation remaining unsatisfactorily unresolved. With present demolitions, residents claim that landowners were not properly consulted, with only the agreement of the three original large landowners in the area secured for the relocation plan to move forward.

This would not be the first time urban evictions occurring under Chen Chu’s mayorship of Kaohsiung have caused controversy, with evictions in the Dagouding neighborhood to build a drainage canal. In some cases, these have been incidents in which Third Force parties as the Free Taiwan Party, Social Democratic Party, and New Power Party have run up against Chen’s DPP mayorship, perhaps in the interest of expanding their local power base in Kaohsiung to become a rival of the DPP in future elections. 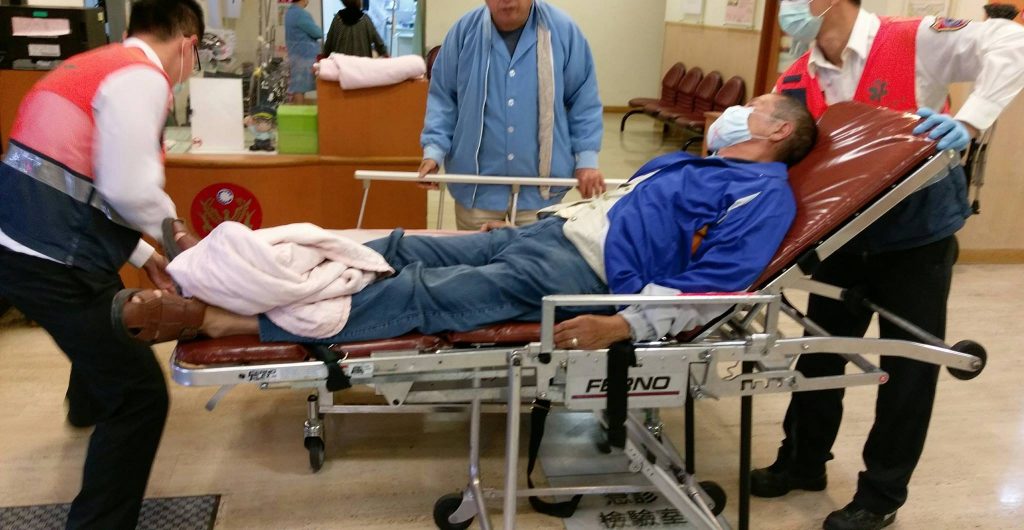 Previous demonstrations against forced evictions in Sanmin District included an incident in which students and elderly residents, chained themselves together overnight before a planned building demolition and threatened to detonate several gas tanks they placed around themselves. This could have resulted in severe injury or death. The current hunger strike has not actually prevented further demolitions from taking place in Kaohsiung as it has gone on, however.

Despite a campaign pledge to stop cases of urban or rural residential evictions, the Tsai administration has been silent on the matter. The Tsai administration has suggested symbolic gestures such as rebuilding the demolished Chang Pharmacy in Dapu, Miaoli. Protests against forced demolitions in Miaoli were an event instrumental in the coalescing of Taiwanese youth activism prior to the Sunflower movement. But at other times, Tsai administration officials have evinced a disdain for activists demonstrating against forced evictions in Taiwan. Minister without portfolio Chang Ching-Sen would take to social media in May to scoff at activists for attempting to resist the eviction of the Wang family from their homes in Shilin, seeing as the Wang family was later reimbursed with apartment complexes worth hundreds of millions of NTD. Apparently Chang could not understand as to why money pay-offs fails to solve problems such as forcibly driving elderly residents out of the homes they have lived in for decades. 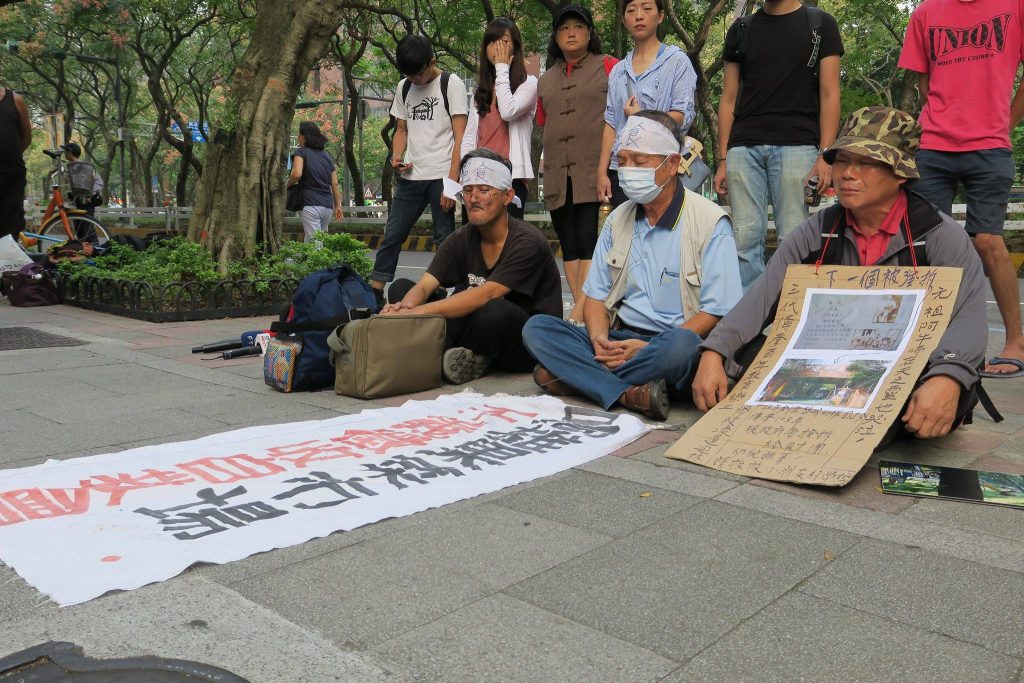 With accusations of undue influence by Chen Chu over Tsai administration policy, particularly regarding labor, perhaps Tsai cannot move very strongly regarding urban evictions in Kaohsiung for fear of offending Chen Chu. Chen Chu is an influential figure within the DPP, going back to her entrance into politics during the dangwai movement. Yet as it stands, forced evictions in Kaohsiung are another instance where the Tsai administration has vowed to address a social problem, but done little when presented with an actual case in point of that problem.