Protest By Tourist Industry Groups Against The Tsai Administration?

A DEMONSTRATION by tourist industry groups against the Tsai administration took place yesterday, with a march beginning at Huashan 1914 Creative Park and ending with a rally in front of the presidential residence at Ketagalan Boulevard. Between five thousand and ten thousand were in attendance.

Apart from a march and rally, the demonstration also featured speeches and several musical performances. The most noteworthy of these performances was a play about the planting of a tree whose bountiful fruit drew many animals—until it was chopped down by an evil witch. Evidently, the metaphor would be to suggest that the tree was the economic stimulus of Chinese tourism planted by Ma Ying-Jeou’s efforts to develop cross-strait economic exchanges between Taiwan and China, but that the the “evil witch” of Tsai Ing-Wen had cut down the tree.

A Decline In Chinese Tourists? Or a Decline in Chinese Group Tour Numbers?

TOURIST INDUSTRY groups were demonstrating against what they see as a drop in Chinese tourists since the Tsai administration took power that threatens their livelihood. It is claimed that since April, Chinese group tours have dropped by 30%. Yet if demonstrators claimed this was threatening their livelihoods, it is to be questioned whether the number of Chinese tourists has actually decreased. 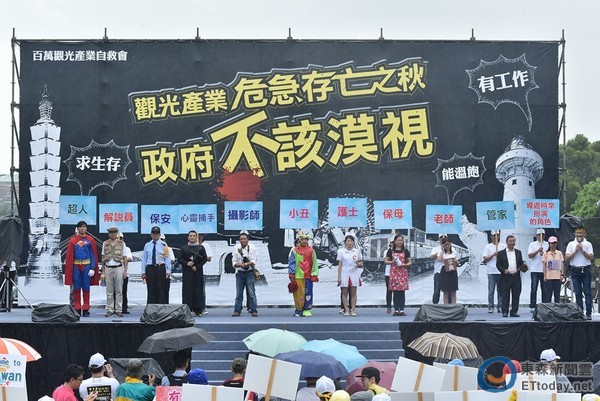 Demonstrating tourist groups have been quick to point fingers at the Tsai administration for causing the decline in tourist numbers, but a decline may be a product of a sluggish Chinese economy and a decline in Chinese tourists in general—not only in the case of Taiwan. Or this may evidence a longer term trend of declining Chinese tourist numbers to Taiwan the blame for which cannot be pinned on the Tsai administration, but is a problem it succeeded from the Ma administration.

It does seem to be the case that Chinese group tour numbers are down, as evidenced in reports of idle tour buses that are normally full and a very visible drop in Chinese visitors at tourist attractions that normally see a large number of Chinese tour groups. But in much media coverage, the decline in Chinese tour groups becomes elided with a decline in Chinese tourists as a whole, without consideration of distinctions between individuals or group tours, and there is a lack of probing into how tourist numbers are generated.

And in the case of the shadowy Taiwanese tourist industry, with rumors of cartels behind tour groups that funnel profits to China rather than Taiwan, it is in the interest of such groups to construct a media narrative that suggests tourist numbers from China are down and that this is threatens the lifeblood of the Taiwanese tourist industry. It is also in the interests of the KMT to construct this narrative, seeing as the surge in Chinese tourism in 2008 after the election of Ma Ying-Jeou was touted as a success in establishing peaceful cross-strait ties between Taiwan and China by the pan-Blue camp. 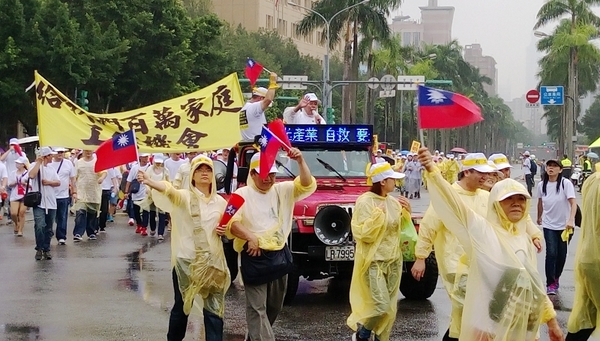 After the election of Tsai Ing-Wen, the pan-Blue camp has attempted to play up its old reputation of being the only political party able to conduct stable cross-strait ties with China—with the suggestion that this extends to the tourist industry. The pan-Blue camp depicts the Chinese tourist industry as a crucial lifeline for the Taiwanese economy that Taiwan cannot do without, as reflective of the broader dependency of the Taiwanese economy on China.

Political Interests Behind The Demonstration?

IF CHINESE TOURIST numbers are down because of worsening cross-strait relations between China and Taiwan under Tsai Ing-Wen’s DPP administration, this obviously would be because of China’s actions in deciding to reduce the amount of Chinese tourists to Taiwan—and not because of any wrongdoing by Tsai. Yet tourist industry groups and the KMT have attempted pin the blame for what they declining tourist numbers on the Tsai administration’s cross-strait policies through Tsai’s refusal to acknowledge the 1992 Consensus.

During the demonstrations signs included placards stating that there was “one family” across both sides of the Taiwan Strait and placards stating “I want 92, I don’t want to starve.” The 1992 Consensus was touched on several times by speakers at the rally, though not all went as far as explicitly stating that Tsai needed to acknowledge it.

During the rally, speakers in fact claimed that onus for declining tourist numbers fell on the Tsai administration and not on Beijing, with claims that the Tsai administration was attempting to deflect blame from itself by blaming Beijing. Speakers stressed that they wanted to maintain their jobs and were not asking for handouts. But notably, even if organizers stated they wished to keep politics out of their demonstration, chairperson Hung Hsiu-Chu of the KMT was present and livestreamed the demonstration on her Facebook page. Members of the extreme pro-unification Chinese Patriotic Alliance Association, known for physically attacking anti-China demonstrators, were also present at the rally. 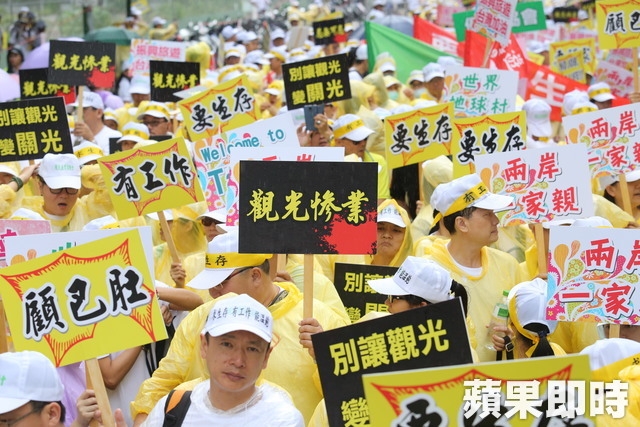 Placards at the rally, including signs stating that there is “one family” across both sides of the Taiwan Straits. Photo credit: Apple Daily

It is in China’s interest to depict Taiwan’s economy as being at its mercy and suggest that it can punish Taiwan if Taiwan refuses to bow to its will in cross-strait relations. But even if there are accusations of the CCP and the KMT working together stoking tourist industry protests from behind the scenes, while not impossible, even in the case of no direct coordination, this situation leads tourist industry groups, the KMT, and the CCP to have a shared interest.

While in a list of twelve demands released to media, tourist industry groups did not explicit call on Tsai to acknowledge the 1992 Consensus, these demands would more broadly call for stronger economic ties with China. Demands include allowing Chinese travelers to transfer planes through Taichung with their passports. Beijing announced shortly before 2016 presidential elections that it was mulling allowing Chinese passengers to transfer planes through Taiwan. Demands also include allowing Chinese tourists 72 hours visa free entry into Taiwan and waiving the visa application fee for Chinese tourists.

SEVERAL DEMANDS addressed Tsai’s New Southwards Policy aimed at weaning Taiwan off of dependency on China, calling on Tsai to boost language training for Southeast Asian languages and simplify the visa application process for Southeast Asian visitors. As these were measures that the Tsai administration already announced it would take, one wonders if demands related to the New Southwards Policy were merely tacked onto the list of demands in order for tourist industry demonstrators to appear as not solely concerned with China. Speakers at the tour industry rally attempted to emphasize that tour guides help to build friendly relations between Taiwan and other nations, including but not limited to China. Yet the suggestion at the end of the day was often that Taiwan’s economy is highly dependent on China, and hence stable cross-strait ties is necessary for not just the tourist industry, but Taiwan as a whole.

Along such lines, the New Southwards Policy in particular was a popular target of speakers at the rally. Some critiques made of Tsai’s New Southwards Policy were not without merit. For example, if blame for declining Chinese tourist numbers was pinned on Beijing, would it be that with diversification of foreign tourism leads to Taiwanese tourism being caught up in Taiwan’s foreign relations with those countries as well? Certainly, the Tsai administration has not gone out of its way to address the damaging of Taiwan’s reputation in Southeast Asian countries that could lead to a decline in tourists from these countries, such as mass fish die-offs in Vietnam caused by the Taiwanese-owned Formosa Steel, or the rape of an Indonesian migrant worker in Taiwan which has sparked rage in Indonesia in the past few days. 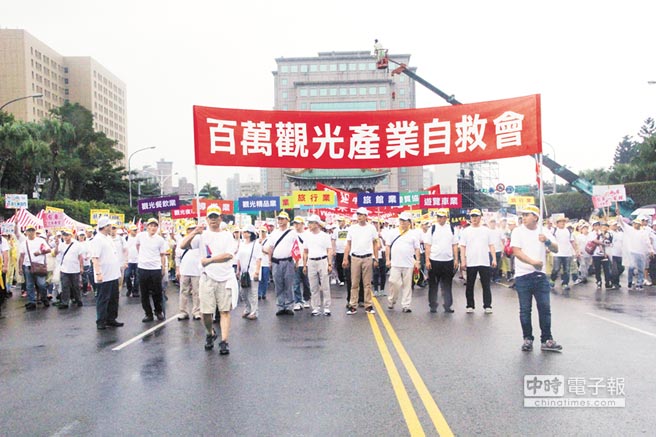 Likewise, with tourism from non-Mandarin speaking countries, the language barrier for members of the tourist industry poses a severe challenge, whereas with China, the shared language makes it much easier for the tourist industry to operate with Chinese tourists. The number of tour guides able to speak Southeast Asian languages in Taiwan is woefully low and many Southeast Asian languages are languages that Taiwanese would need more than one year of study to pick up.

We can perhaps view tourist group demonstrations as a “growing pain” of Tsai’s New Southwards Policy. Though some of the critiques made by tourist industry demonstrators are in fact quite logical, with attempts to wean Taiwan off of economic dependence on China there will be resistance from those whose livelihood is dependent on China. And the Tsai administration cannot please everyone in this, for there are indeed individuals who are not wealthy magnates of the tourist industry, but whose livelihoods will be genuinely affected by the decline in Chinese tour groups. Even cabinet members of the Tsai administration are sometimes wary of the drop in Chinese tourists as affecting Taiwan’s economy. But longer-term aims must be kept in mind.

Questions for the Tour Industry and for the Tsai Administration

DEMONSTRATIONS MAY point to flaws with the present model of tourism focused on Chinese tour groups. Notably, businesses exist to cater specifically to Chinese tourists, and so profit from Chinese tourists does not actually go to Taiwanese businesses that do not cater only to Chinese tourists. It also is that the social disruption and pollution caused by Chinese group tours leads them to be disliked, leading some in Taiwan to celebrate a decline in Chinese tourist group numbers. Some have suggested that Chinese individual tourists do not create such havoc and that this would be a more sustainable economic and less environmentally disruptive model for Taiwan, even if in China it is currently more difficult for Chinese individual tourists to apply to visit Taiwan because of application quotas.

It is may be because of this relative isolation of the Chinese tourist industry from the rest of society, despite its size, the tourist industry demonstration was not an occasion for soul-searching by Taiwanese civil society in the way of the unexpectedly large size of the protest against pension reform by public sector workers as military, civil servants, and public schoolteachers earlier this month. Likewise, the Chinese tourist industry is sometimes seen as gambling with Taiwan’s sovereignty for the sake of its own interests, without consideration of how this would affect Taiwan as a whole. 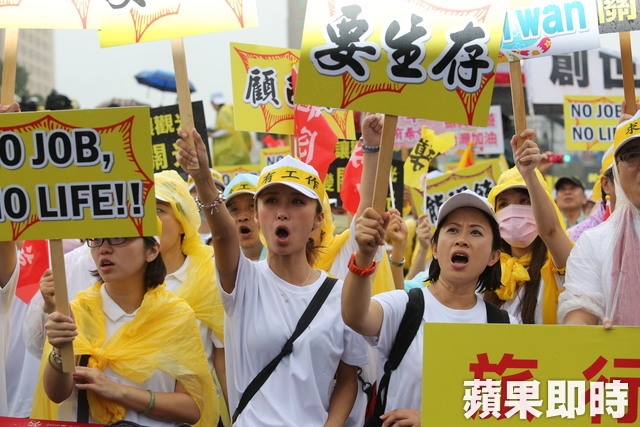 Third Force parties such as the New Power Party and Social Democratic Party did not directly address the protest as they did the earlier demonstration against pension reform, for example, with Third Force parties attempting to communicate the need for pension reform at the risk of pensions for public sector workers. The pro-independence Free Taiwan Party, the only Third Force party to respond, would release a statement stating that it respected the right to demonstrate of tourist industry groups on labor grounds, it viewed them as unwittingly playing into China’s hands through their actions.

One may be sympathetic to the individuals whose livelihoods will be genuinely affected by the decline in Chinese tour groups. Yet if the Tsai administration hopes to get anything done with the many reform initiatives it has on its table, including pension reform, the New Southwards policy, transitional justice, KMT party assets, and judicial reform, it has to know when to draw the line regarding interest groups whose demands are far from reflective of the popular will.