Will A ‘Civil War’ Break Out Between Third Force Parties Before 2018 Elections?

A “CIVIL WAR” between post-Sunflower Movement “Third Force” parties, composed of activists that sought to enter electoral politics after the movement, is possible in the lead-up to 2018 elections. Namely, it is possible that multiple Third Force parties will run in the same areas, leading to conflict. 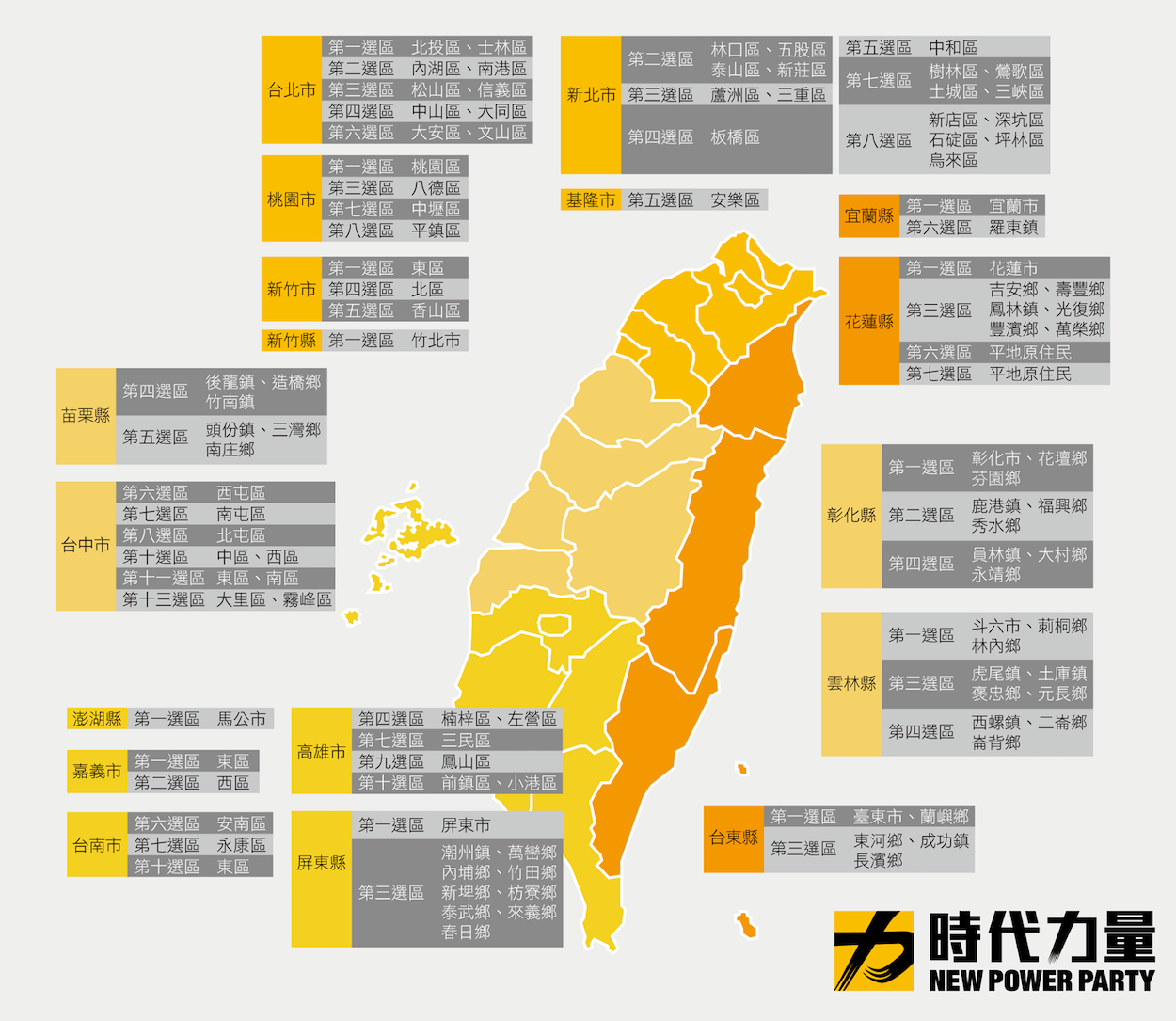 The districts in which the NPP plans to run in 2018. Photo credit: New Power Party/Facebook

Some contention has already taken place, particularly regarding the role of the New Power Party (NPP), and statements by purported NPP members. Apart from the fact the NPP is currently the only Third Force party with seats in legislature, conflict may be compounded by the fact that the NPP is the largest Third Force party, counts among its members individuals seen as “leaders” of the Sunflower Movement by the public at large, has long been perceived as having the most resources of any Third Force party. The NPP also recently launched a wide-ranging plan to directly compete with the DPP and field candidates across the country, fielding candidates in areas where it had higher vote shares.

Some controversy has also occurred with another individual claiming to be a member of the NPP attacking Green Party candidate Wang Hau-Yu for helping out as a volunteer at the opening of the NPP’s Taoyuan office, claiming that Wang was hoping to steal the spotlight from the NPP, particularly seeing as the Green Party has adopted yellow party attire similar to that of the NPP in order to distinguish itself from the green color attired of the DPP. Wang has, in turn, expressed his disappointment with such comments, stating that he was helping out because he feared that the NPP’s party opening would not receive any attention, and because he looked forward to possible cooperation between the NPP and Green Party despite the possibility of competition or that the NPP would edge out the Green Party, seeing as Taoyuan is the only area in which it had higher vote shares during past elections. 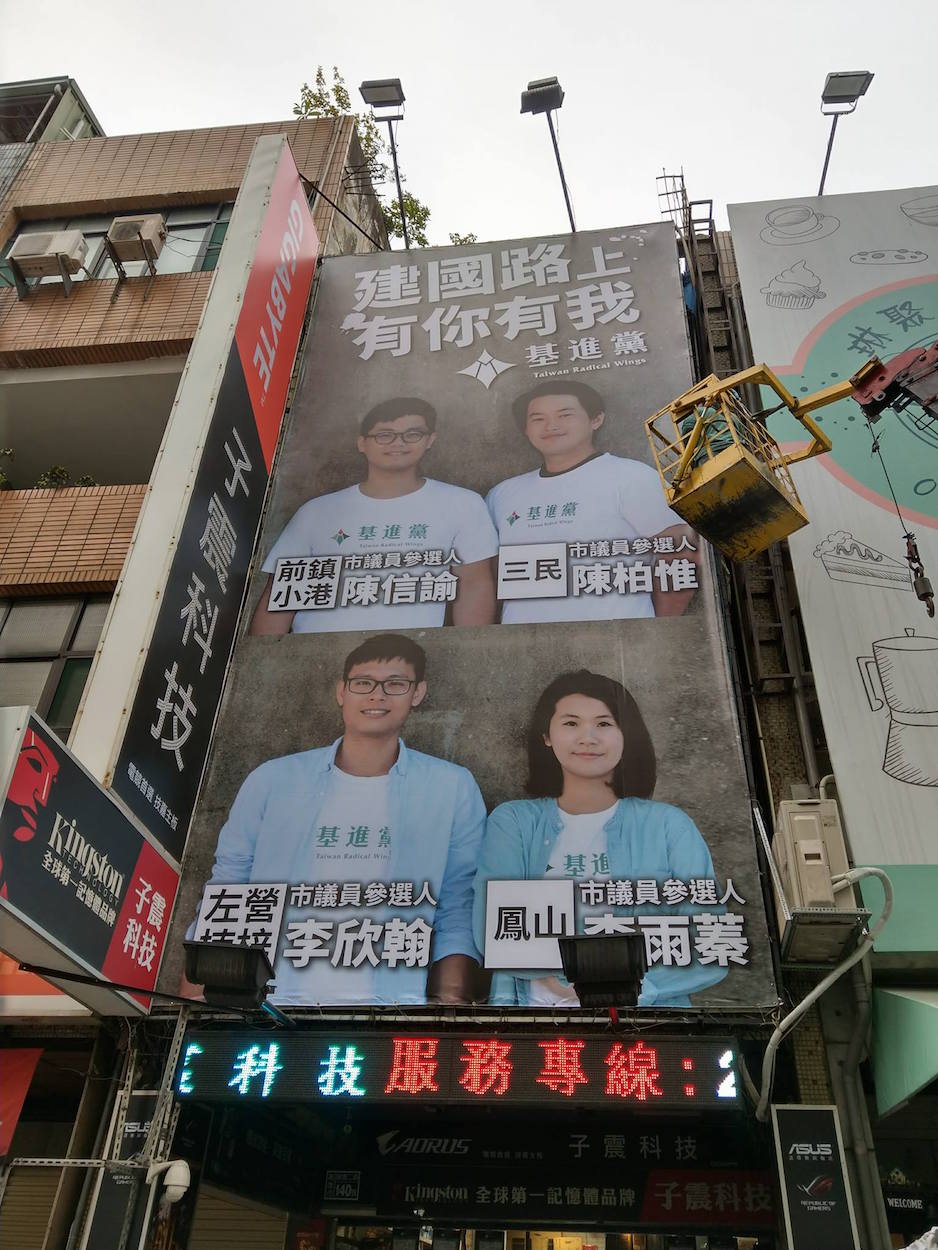 Firstly, with the NPP being perceived as having the most resources among Third Force Parties, this has led to backlash from other Third Force parties which see themselves as having to scramble for limited resources. The NPP is perceived as having received a large amount of money from old Taiwanese independence supporters that were formerly heavyweights within the DPP such as Peng Ming-min, the first DPP presidential candidate, who decided to support the NPP after briefly feeling out the Free Taiwan Party and considering support for them. But, in general, allegations against youth activists that later entered electoral politics of taking money from the DPP to undertake certain actions have been long standing and are frequently thrown about by activists within the activist community, sometimes in a highly slanderous or defaming manner.

Furthermore, as the largest Third Force party and one which has seen a great deal of growth in the past year, the NPP is facing issues regarding individual party members making controversial statements, because the party is now large enough that it can no longer account for the public statements or controversial actions by members, or individuals who at least claim to be members. A woman filmed crashing a wedding and attacking wedding guests in a recent viral video, for example, claimed to be a member of the NPP, and it remains to be seen whether the individuals who criticized the Radical Party or Green Party on social media are actually NPP members. This will be a threat facing any Third Force party that grows large enough, however. Some suggest in a somewhat conspiratorial but not impossible fashion, that it may be a possibility that pan-Blue or even pan-Green actors are hoping to split Third Force parties and make them turn against each other.

For activists, it bears keeping in mind NPP remains dwarfed by the DPP and KMT. The recent recall vote facing NPP chair Huang Kuo-Chang was, somewhat unexpectedly, a rallying point for Taiwanese activists, who united suddenly in support of Huang in a manner which was actually somewhat surprising. Past grudges against Huang dating back to the Sunflower Movement were dropped in order to support Huang against the anti-gay groups hoping to recall Huang for his support of gay marriage and members of the KMT that leapt onto the recall vote organized by anti-gay groups in order to try and remove Huang. As such, Huang received the public endorsement of more or less every Third Force party. Yet although Huang defeated the recall vote and was allowed to stay in office, this was a narrow win for Huang, and so it seems a bit much to conclude that the NPP has more than enough resources when it just barely overcame this recall vote.

Secondly, with regards to the present possibility of Third Force parties directly competing with each other, it must be remembered that this did not occur in the past. Third Force parties largely backed out from each other’s way to avoid competing with each other. When Social Democratic Party (SDP) chair Fan Yun announced plans to run in Daan, for example, Freddy Lim of the NPP backed off from his publicly declared plans to run in Daan, the district where he was born and had grown up, and instead ran in Wanhua, Lim winning in Wanhua but Fan losing in Daan. 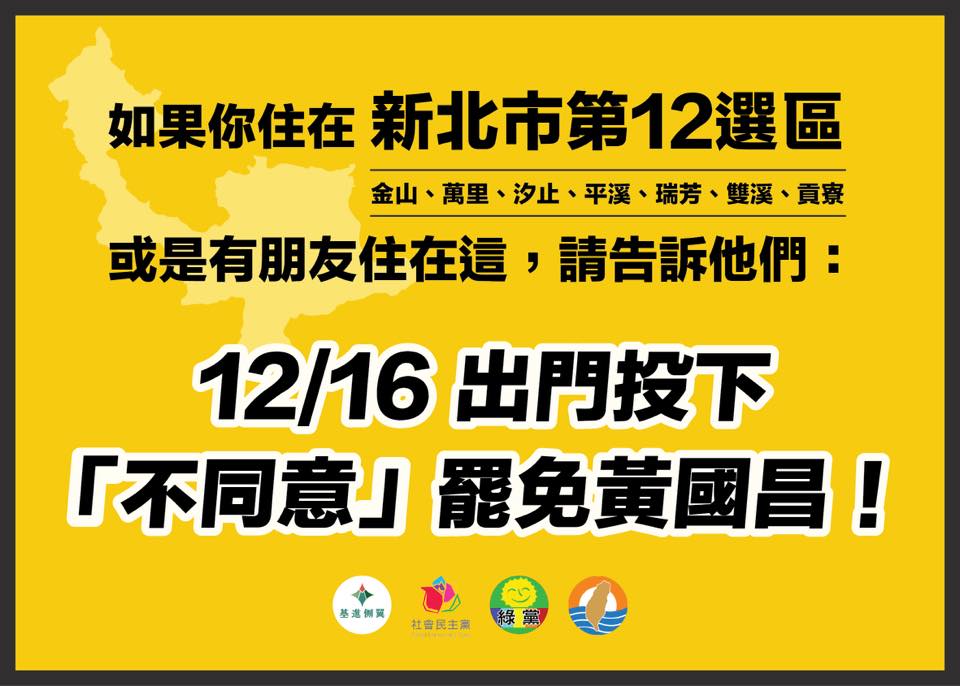 However, Third Force parties are more likely to directly compete with each other in 2018 elections because Third Force parties generally intend not to only run legislative candidates, but city council candidates, meaning that there is an overall larger number of candidates that will be running this time around and this raises the possibility of direct competition. In particular, the greater size of the NPP will again be an issue, seeing as the NPP has its eye on substantial growth, and intends to field figures known from the time of the Sunflower Movement who are part of the party as city councillor candidates, such individuals having spent time accumulating experience as legislative aides in the time since. This will, again, open the NPP up to accusations that it is seeking to force out other Third Force parties, even if it had backed off in the past.

It remains to be seen whether alliances between Third Force will be brokered between now and 2018 elections. Some alliances have proved surprisingly enduring, for example, the Green Party and SDP deciding to run on a joint bill despite a period of tension between the two parties, the older and more established Green Party seeming to feel that the SDP compromised too much on a left political platform during 2018 elections.

This was aided by the fact that, in most cases, Third Force parties backed off from direct conflict from the DPP to begin with, choosing to run in areas which were traditionally light Blue in order to avoid taking any districts away from DPP victories through a split vote, even if this meant an uphill struggle towards victory. But controversy broke out with regards to the NPP deciding early on that it was willing to work with the DPP and the SDP initially positioning itself as differing from the NPP through its unwillingness to work with the DPP, then the party unexpectedly reversing course on this, and seeking DPP endorsement. 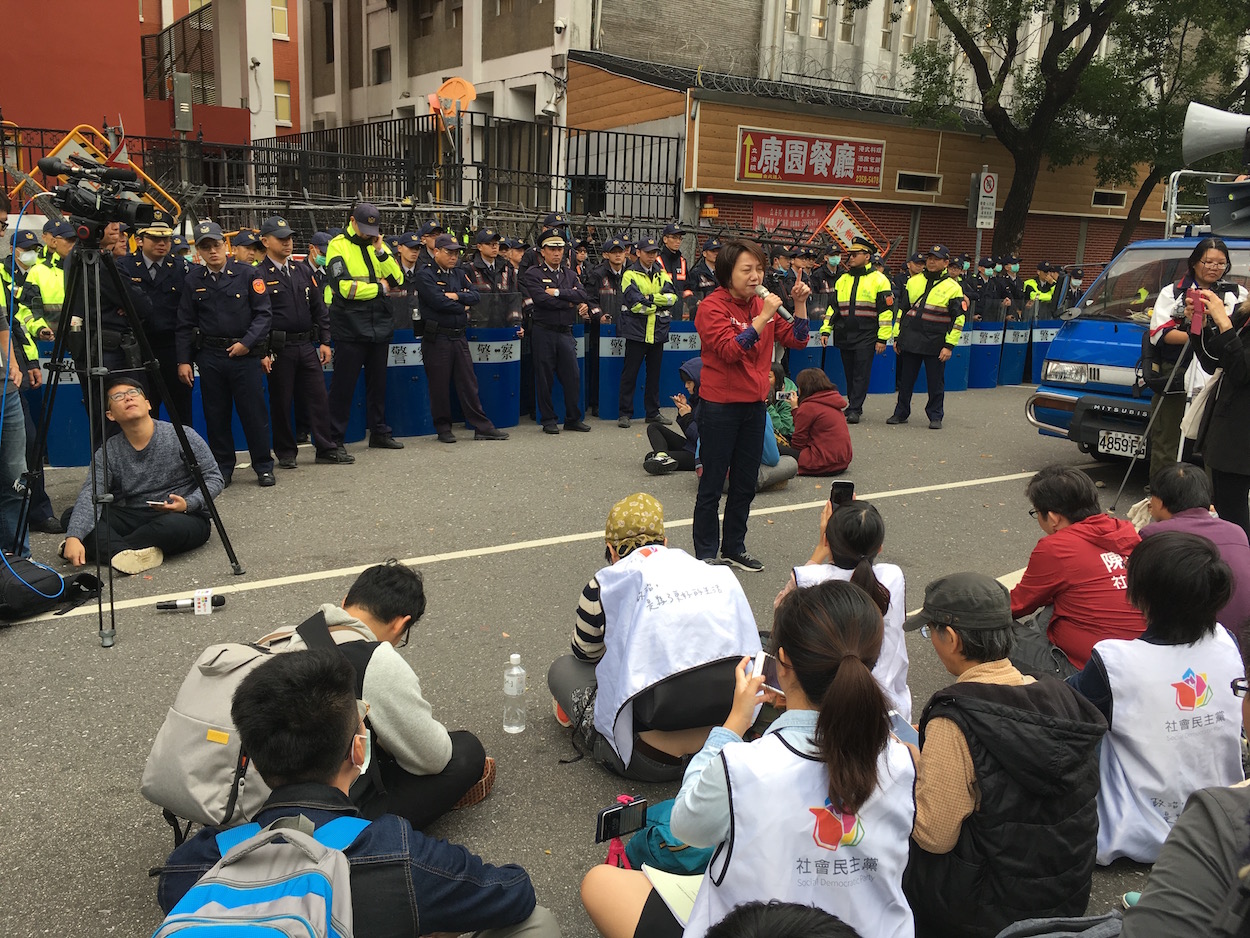 While Third Force parties generally supported each other during 2016 elections, again, as observed in Freddy Lim of the NPP backing off in favor of Fan Yun in Daan, this eventually led Fan Yun to back Ker Chien-Ming of the DPP over Handy Chiu of the NPP. The electoral contest between Ker and Chiu in Hsinchu was the one place in which a Third Force party ran up against a DPP candidate who refused to make way. As a result, Chiu lost, with the SDP’s actions remaining controversial due to the fact that Ker is particularly hated among Taiwanese activists due to the view that he is a politician that engages in backroom deal brokering with the KMT.

INDIVIDUALS AS noted activist designer Lao Dan, the designer of much iconic protest art in recent years, have precisely warned against such a “civil war” between Third Force parties in posts on social media, perhaps drawing on this phrase from the 2016 Captain America movie. Yet either way, in the close to two years since 2016 elections, while some grudges among the activist community dating back to elections and before that to the Sunflower Movement have been forgiven, still other frictions have emerged, and it is a question as to whether Third Force parties will unite or split.

It also should noted that shift in political messaging between 2016 elections and the present seems to have occurred between Third Force parties. For example, members of the SDP now express a platform more openly supportive of Taiwanese independence than in the past, something they previously left to the SDP. On the other hand, unlike other Third Force parties, the NPP has its hands when it regards to expressing public support of certain issues. For example, despite fronting opposition against planned changes to the Labor Standards Act in legislator, the NPP is usually unable to publicly appear at protests regarding the issue, with members usually appearing at protests in their regular clothes, without any party banner. DPP majority speaker Ker Chien-Ming has accused the NPP of orchestrating labor demonstrations around the issue in the past and the NPP seems to want to avoid adding to this perception, likely also with the view that this would undermine the work of labor organizers to demonstrate substantial opposition to the changes from Taiwanese workers. It remains to be seen how these shifts in positions by Third Force parties will affect how they perform in upcoming elections. 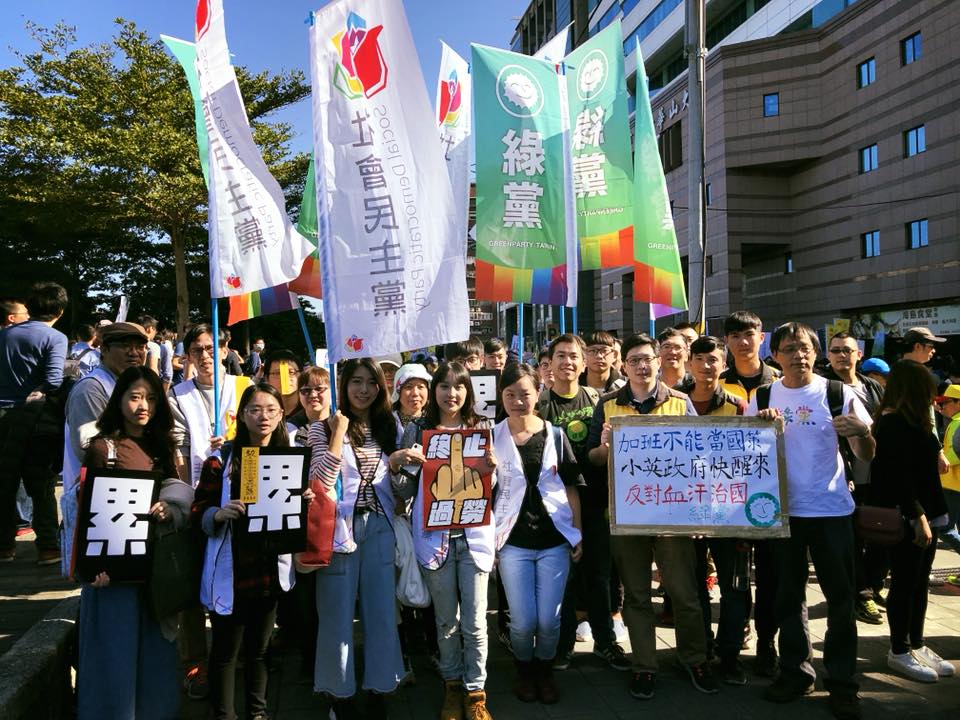 Or it may be that divides between the parties are too large, and cooperation proves impossible. In particular, political grudges between Third Force party leaders sometimes are longstanding, going back all the way to the Wild Lily Movement. That would be disappointing, but also not surprising.