QUITE POSSIBLY making labor history in China would be recent strikes by thousands of Chinese Wal-Mart workers. Strikes in July took place in Nanchang, Harbin, Chengdu, and particularly Shenzhen. What Wal-Mart workers are demonstrating is the introduction of a new system for calculating work hours, which would have severely affected regular work hours and eliminated overtime pay. Under the system, Wal-Mart workers could be arbitrarily assigned hours by management, so long as they worked a total of 174 hours per month.

Strikes are organized through the Wal-Mart Chinese Workers’ Association (WCWA) organization, which originated from efforts to organize by Chinese Wal-Mart workers dating back to 2006. Reportedly, in past months, membership has soared from between one hundred and two hundred members to thousands, with actions being coordinated online through WeChat. Workers have also recently set up the Walmart Workers Rights Defence Coordination Group to coordinate actions. 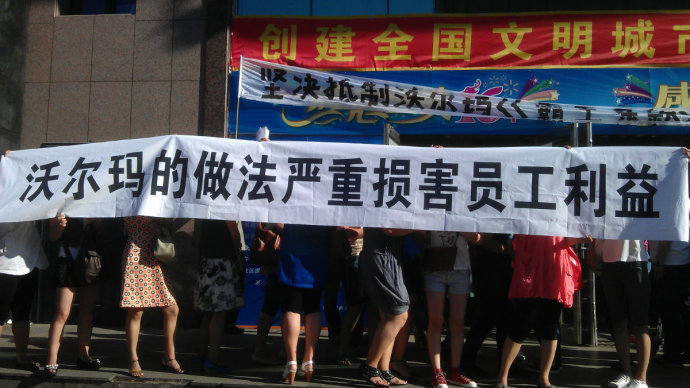 Although discussion seems to have largely been relegated to joint discussion and the offering of mutual support, there are talks of coordinated actions take place in the future. We will see if this happens in the future. Notably, despite that transnational solidarity occurs on the grassroots level between individual workers or small groups of workers, for labor unions of the same company between different international locations as Chinese workers of WCWA and American workers in OUR Wal-Mart to express solidarity is fairly rare.

But rarer still is actual coordinated action between international labor unions with shared targets in mind. The may, in effect, be the trap of the politics of transnational “solidarity”, in which one offers support to individuals in another nation, but do not always offer anything beyond that on the level of actual, joint material cooperation. So far, this seems to be largely the level at which cooperation between American and Chinese Wal-Mart unions has remained at.

Notably, the challenges faced by union organizers in China and America are quite different. Obviously it is that Wal-Mart workers in China face the very direct threat of suppression by the state. Efforts in union organizing in China are also impeded by that the state-run All China Federation of Trade Unions is the only legal trade union, if this official labor union more often than not is in fact a means for the state to quell labor dissents. Wal-Mart workers in China organizing through the WCWA are already facing online trolling and investigation by the National Security Bureau.

In the case of international solidarity efforts, there is the possibility that this may in fact prove detrimental to Chinese workers if this allows for the Chinese party-state to accuse striking workers of collusion with foreign powers. This is particularly a threat for Chinese Wal-Mart workers in Shenzhen, which is located in Guangdong province. Guangdong province has seen high levels of labor activity in the past year, but Chinese authorities are increasingly wary of any form of dissent in the area since the Umbrella movement in 2014, inclusive of labor, which sometimes includes accusations of collusion with foreign powers.

Thus, to reiterate, in order for workers to make demands on a international corporation as Wal-Mart may inherently demand transnational organizing. But it remains to be worked out what this will consist of. And if Chinese Wal-Mart workers have taken a stand, many steps still need to be taken.