Manifesto of the Workers’ Hunger Strike Over Cut Public Holidays

New Bloom editors Parson Young and Brian Hioe translated the manifesto of currently hunger striking workers from the Worker’s Struggle (2016工人鬥總統) collective of labor unions, who are on hunger strike outside of the Legislative Yuan.

IN JULY 2012, China Airlines flight attendant Yin was hospitalized after fainting from an attack of myocarditis, which happened after 11 days of consecutive flight assignments. China Airlines claims that all scheduling was done in accordance to the stipulations of the Ministry of Transportations and Communications.

In March 2013, a security guard working in Kaohsiung, Mr. Huang, died during his shift after having worked for more than 288 hours in the five months prior. His employer claims that Mr. Huang was not overworked, and that he instead died from pre-existing conditions. 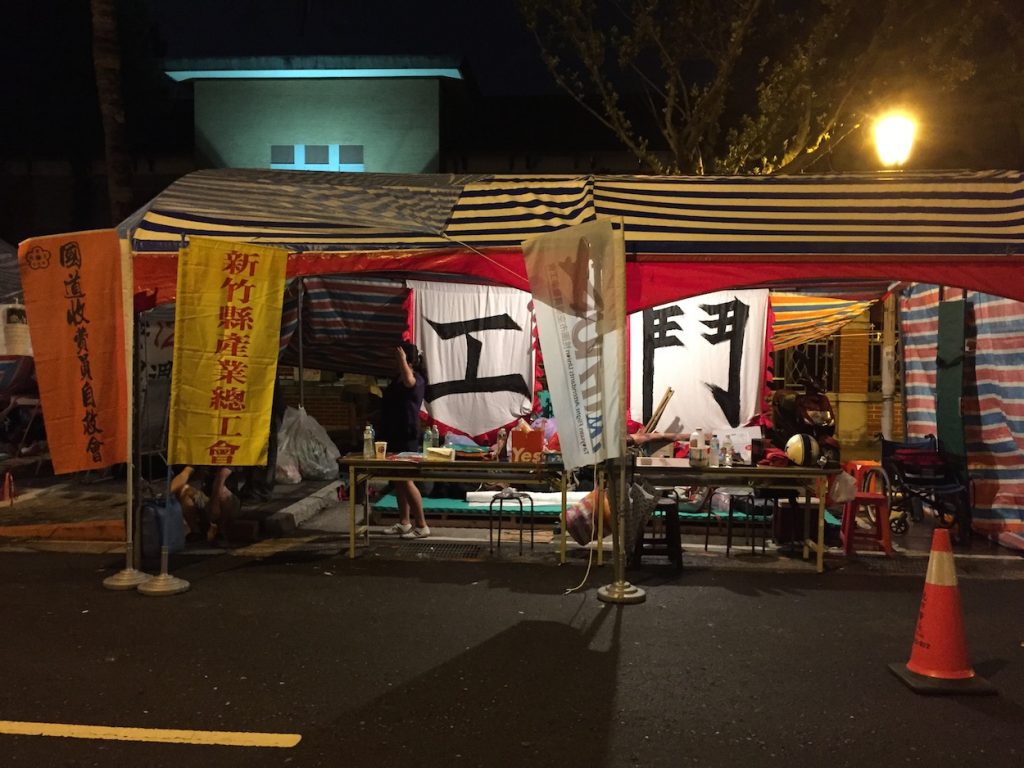 The site of the hunger strike outside the Legislative Yuan on Tuesday night. Photo credit: Brian Hioe

In 2014, a female worker in the media/public Relations industry who for years was demanded to work overtime from her employer via communications software, and died from a stroke caused by fatigue, a death known as karōshi (overwork death).

In April 2015, a postal worker in Miaoli begin his shift in ill health due to a shortage of manpower, and died during the shift.

In February 2016, a bus driver died while on standby during his shift after a long period of overwork. In the 6 months prior to his death he worked on average 186 hours of overtime, and later was discovered to have worked up to 222 hours. 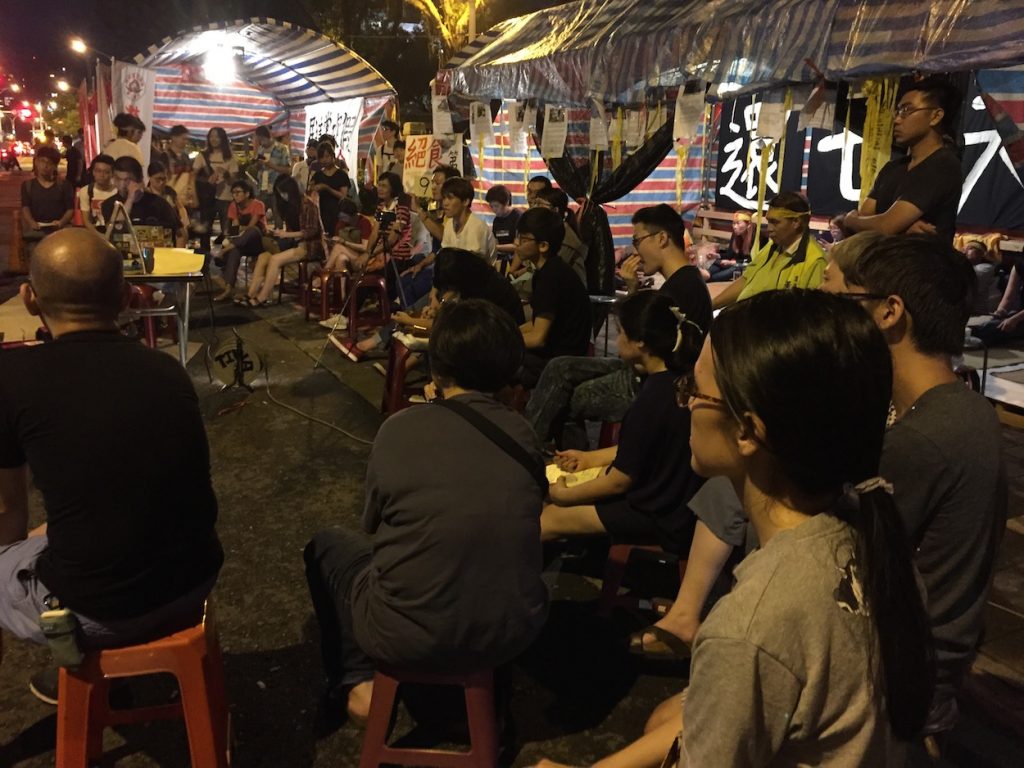 In the past five years, Taiwan on average has one new case of overwork-related disease every five days, and one case of overwork-related death every eleven days. Behind every statistical number is a family torn asunder and a life that cannot be brought back. Incredibly, in facing the overly long hours of the Taiwanese workers and the long overtime hours they are forced to take due to low wages, both the KMT and the DPP choose to further cut seven national holidays, and turn a two day weekend into a one-day weekend with one “flexible rest day”, allowing employers to further take away holiday with money. This does not help solve the overwork epidemic among Taiwanese workers in any way. 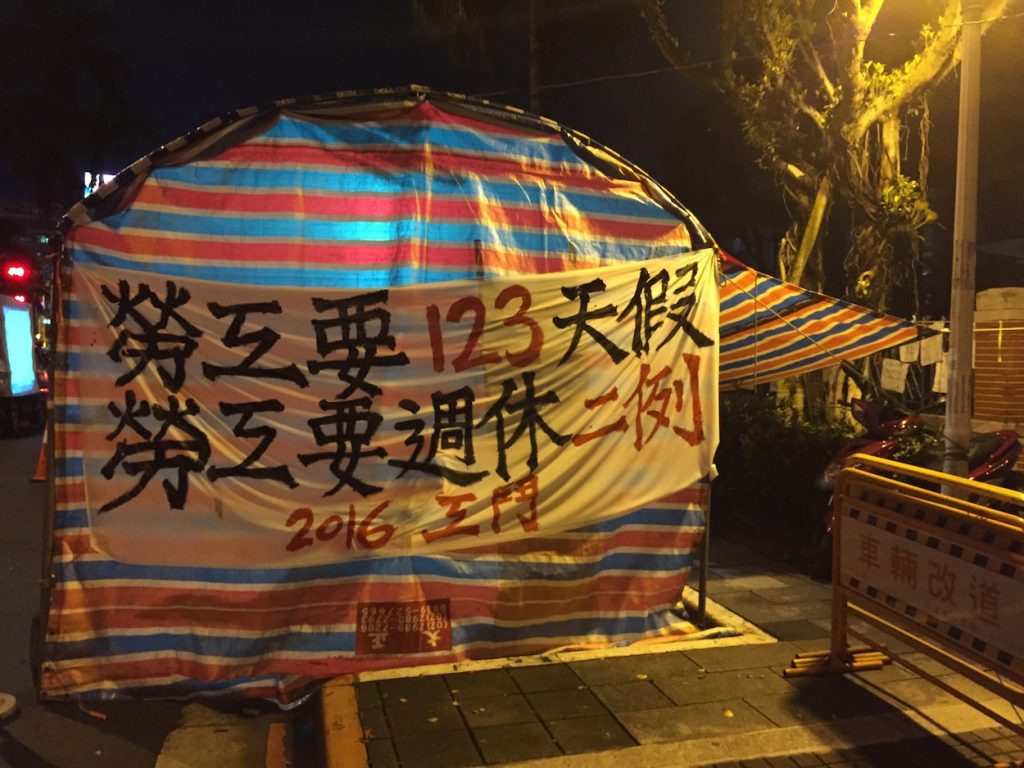 In order to cut the seven national holidays, the government first lied and said that workers have more days off than government workers. Then they said that the holiday cut was a “consensus between workers and bosses.” They even went on to say that giving workers taking days off are “against transitional justice!” The bosses in the industrial and commercial sectors also enjoy speaking through the media, claiming that workers’ holidays would cause them to go out of business, that they would cut bonuses if workers take holidays, that those who take breaks are good-for-nothings, and even that overtime work is good for your mental and physical wellbeing. Now they even accuse workers who refuse to compromise of being “detached from reality.” But the reality in Taiwan, as we know, is that we have the third longest work hours in the world, and that after cutting holidays we would get the second least amount of breaks and national holidays in the world. We know that if we don’t cut the work hours, there will only be more workers being overworked. 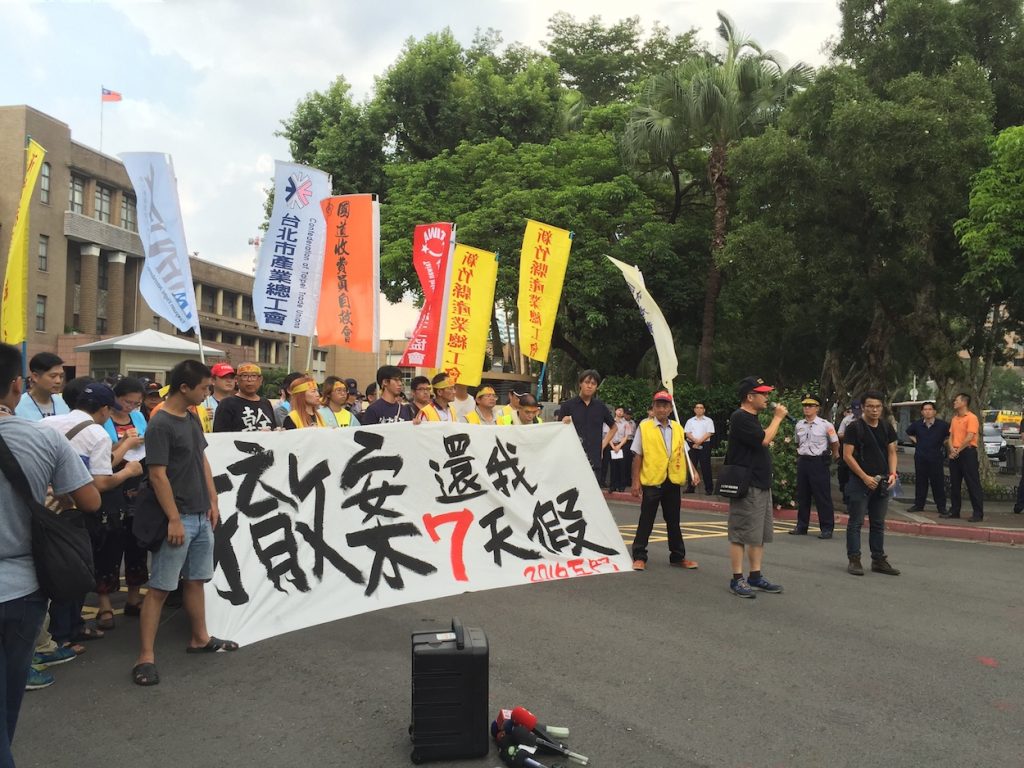 Since the implementation of the Labor Standards Act in 1984 until now in 2016, Taiwan’s GDP has grown more than 7.5 times, business income tax was lowered from 25% to 17%, the Far Eastern Group of the Hsu family now owns a highway, Formosa Plastics of the Wang family built the #6 Naptha Cracker, and the Evergreen group of the Chang family now monopolizes air and sea freights. But the Taiwanese workers only went from having a one-day weekend to having an extra “break day,” and for this we have to lose seven national holidays.

We’d like to ask, from 1984 to 2016, when the Taiwanese workers spent their lives working daily overtime for their bosses and create enormous profits, what did they get in return? We get either breaks-without-pay or a system of job responsibility, either the third longest work hours in the world or overwork-related deaths. We struggle to earn a wage for our families, only to lose the time to spend with them, or even our own lives. But now is the opportunity to change. 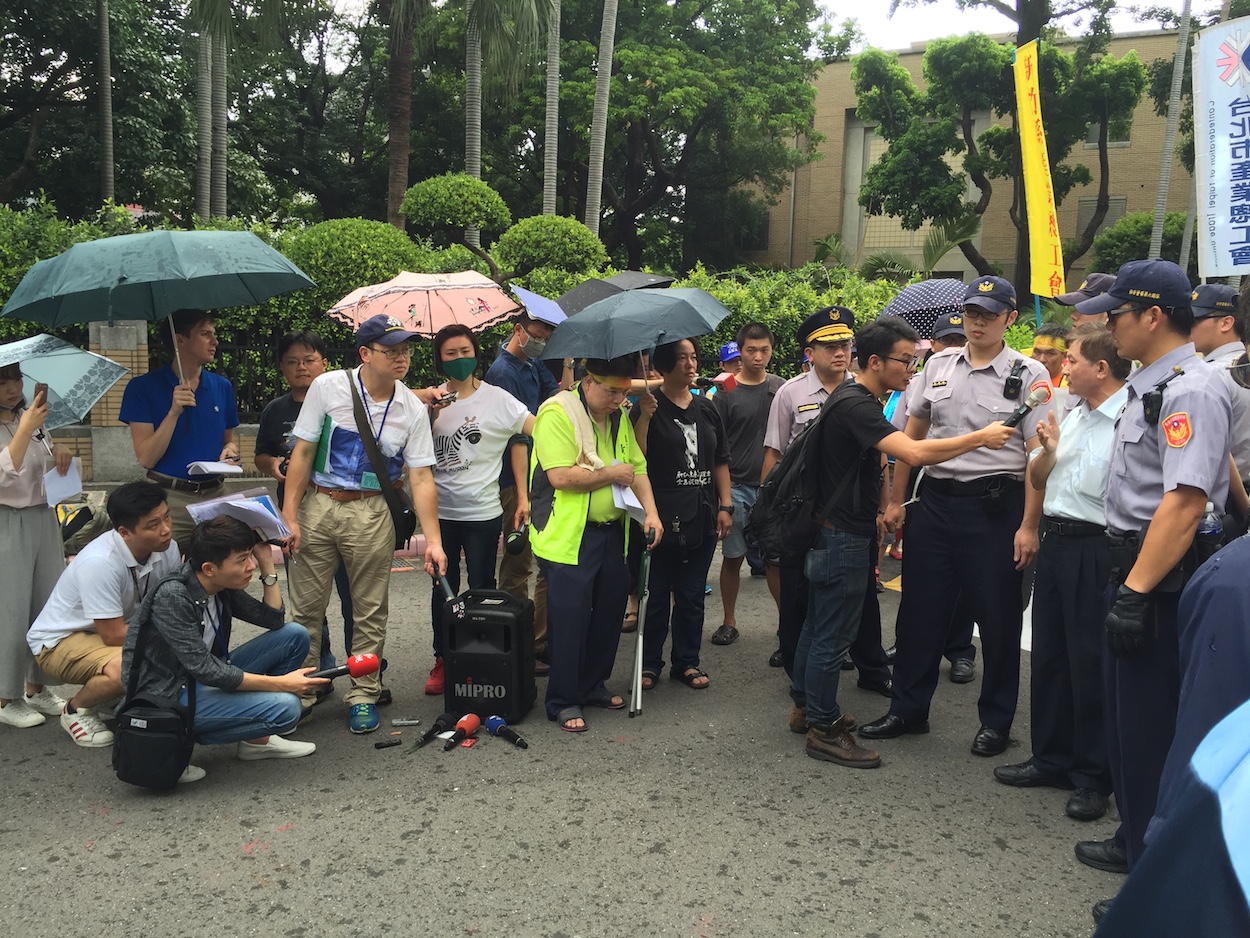 Confrontation between a worker’s representative and an Executive Yuan official. Both are visible on the right. The official only agreed to come out to discuss if he was behind police at all times. Photo credit: Brian Hioe

Now is the key juncture where the workers of Taiwan can break away from overwork. If we miss this legislative amendment, then we need to wait for another 16 years. We cannot imagine how many more families and workers would becomes victims in these 16 years should we fail.

Starting from July 19th, we are beginning a hunger strike with unlimited duration. 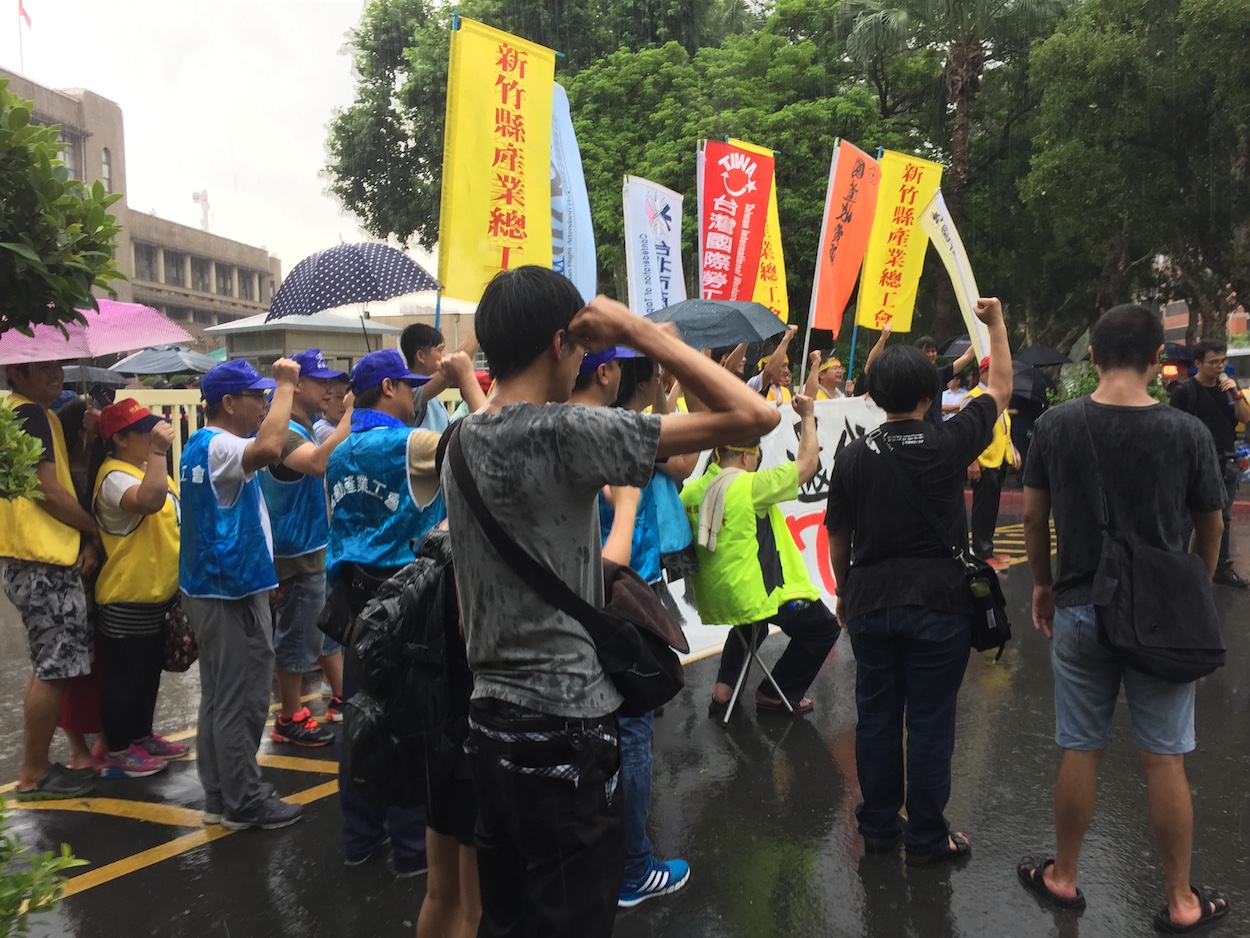 We’d like to say to the workers in Taiwan: we need to break from the third longest work hours in the world. We need to expel overwork from this island. We should have more time to spend with our families, more time that belongs to us instead of the bosses. A two-day weekend, which gives 123 days off in a year, should be a right to all employed people of Taiwan. Please stand with us and change this island of overwork.

We would also like to say to the DPP government: cutting the seven holidays hurts the Taiwanese workers, a one day weekend with one break day would only cause more overwork! We want to witness with our own eyes whether the Taiwanese workers are the slaves of the corporations or the masters of this country? If the DPP still insists on the program of“one-day weekend with one “break” day while cutting 7 holidays, then it is no different from the KMT in antagonizing the workers of Taiwan. Let us fight them to the end.

Hunger strikers (from left to right): 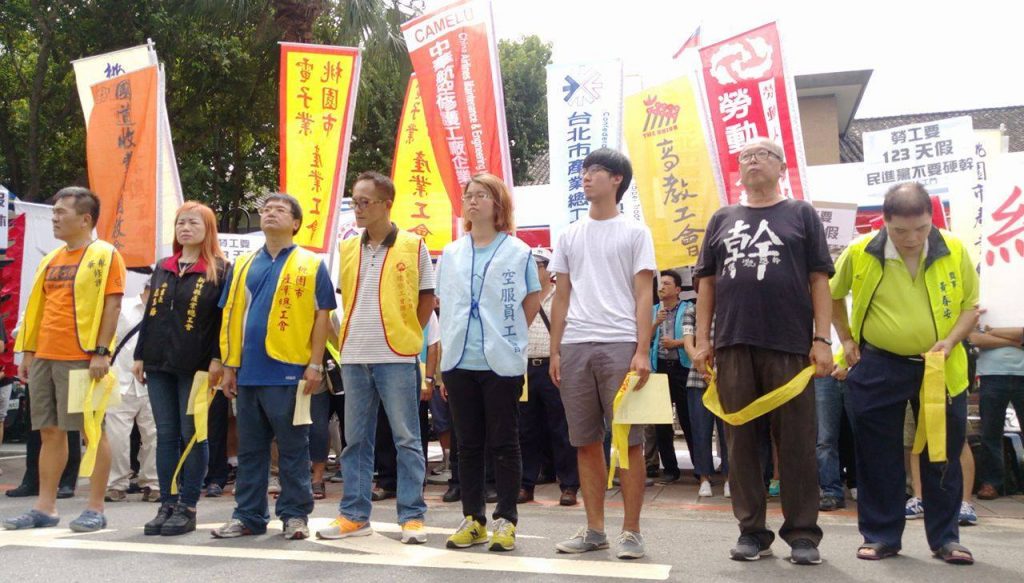