IN PAST MONTHS, the KMT has attempted to present itself as a labor-friendly party as a way of attacking the current DPP government. This can be seen in the recent spate of KMT legislator appearances at key labor demonstrations. These include current party chairperson Hung Hsiu-Chu making an appearance at the China Airlines strike in June, and legislator Chiang Wan-An, the great-grandson of Chiang Kai-Shek, making an appearance at both the China Airlines strike and demonstrations against the Tsai administration’s planned cuts to public holidays.

Likewise, the KMT has used the issue of cuts to public holidays to grandstand in legislature, fighting with DPP legislators in the Legislative Yuan in order to try to prevent the Tsai administration’s unpopular labor reforms from passing. With demonstrations in early September by public servants against the Tsai administration’s planned pension reforms which would reduce their pension funds in order to prevent government bankruptcy, the KMT also seized upon these event by playing up anger over pension cuts as a labor dispute, and acting as though the KMT sided with public servants.

This pro-labor position is for show, as can be seen in claims that the party has run out of funds to pay its workers with the current government probe into illegal party assets of the KMT. Recently, KMT staff members have been demonstrating against the DPP, claiming that it is the Tsai administration’s fault they are not being paid by the party. To begin with, if the KMT has no funds to pay workers because of the current freeze on assets under probe, that indicates to what extent the KMT’s total assets are illegally obtained. And as members of the assets probe task force have pointed out, if KMT staff members are genuinely not being paid by party central, this is a labor issue that they should take up with their employers through union organizing—rather than using this as a phony issue to demonstrate against the DPP-led government.

The true face of the KMT is visible in recent reports that KMT chairperson Hung Hsiu-Chu took a loan from Terry Guo’s mother on behalf of the KMT in order to pay staff members’ salaries. Terry Guo is the industrial magnate and owner of the brutally exploitative Hon Hai Technology Group. Hon Hai is better known as FoxConn, the Taiwanese electronics company known for working employees to suicide in its Chinese manufacturing plants. Guo is a longtime supporter of the KMT, likely because he counts on the KMT to maintain ties with China to continue operating his company. Individuals as Guo are enemies of both the Taiwanese and Chinese working class.

Furthermore, it is wholly hypocritical for individuals such as Johnny Chiang or his son Chiang Wan-An to make appearances at labor rallies and claim that they stand on the side of laborers, as they did during late October’s demonstration against planned cuts to public holidays and the earlier China Airlines strike. The two Chiangs are descendants of former dictators Chiang Kai-Shek and Chiang Ching-Kuo, the two individuals most responsible for the actions of the KMT party-state against Taiwanese labor during the authoritarian period. Specifically, Johnny Chiang and Chiang Wan-An are descendents through Chiang Ching-Kuo and his mistress Chang Ya-Juo. Both politicians changed their last name from Chang to Chiang as adults, and chose to trade on the Chiang name and family connections as a way of attempting to revive the Chiang family’s history of political power.

It is true that due to the KMT’s revolutionary history in China and the shared origins of the CCP and KMT, an emphasis on labor is enshrined in the deep Blue ideology of “Tridemism” (三民主義). During the ideological turmoil of Republican China, some elements of the KMT were among the early introducers of socialist thought into China, and both left and right wings of the KMT existed in Republican China. 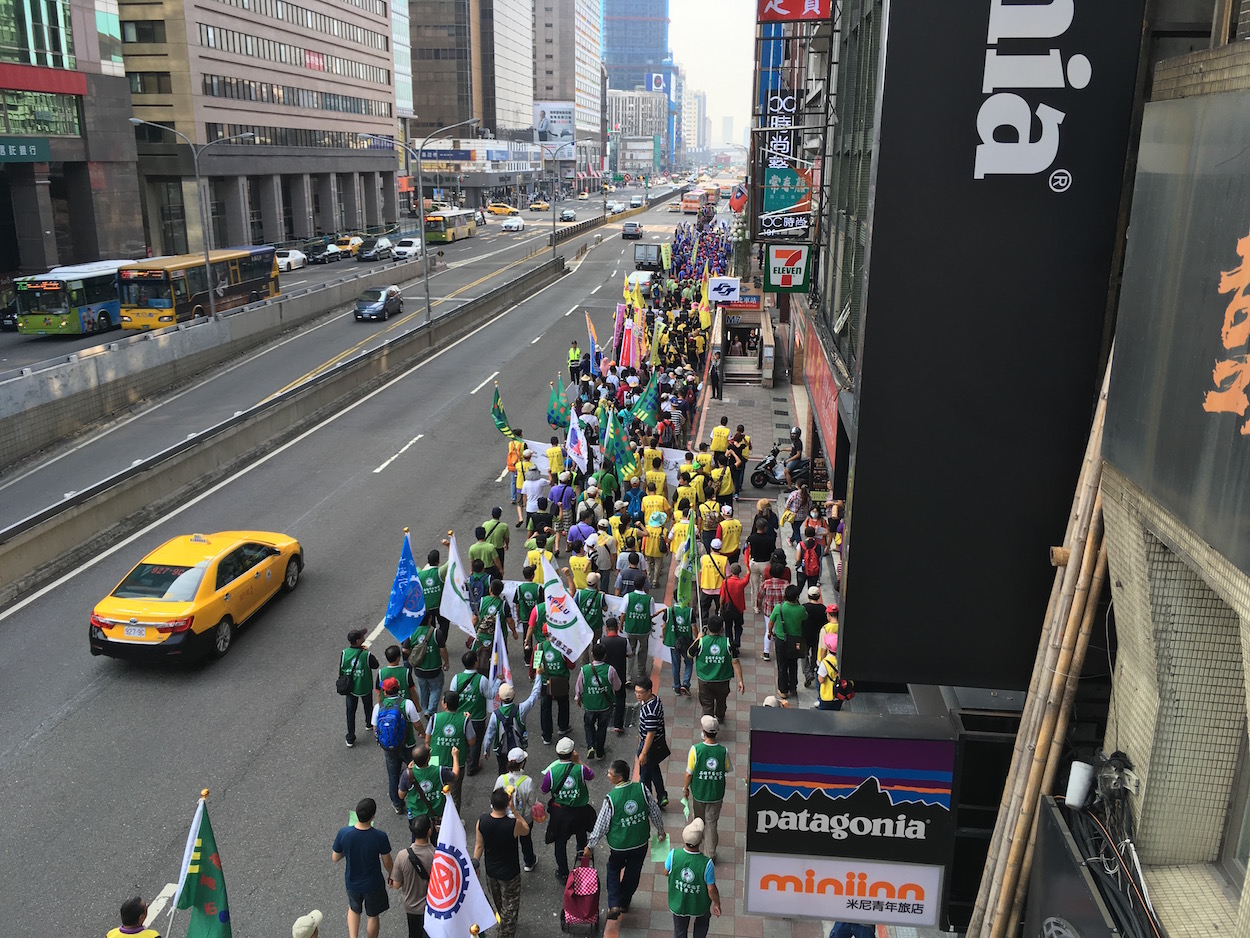 This is why the KMT’s younger reformist elements who call for party reform while being deeply wedded to deep Blue ideology take a large interest in labor issues. Part of their calls are for the party modernize in order to return to its revolutionary roots. This is also one of the reasons why leftist labor activists of waishengren descendent sometimes enter the KMT after a period of labor activism, despite having conflicted with the KMT during past activism. These labor activists sometimes have the view that they can change the party from within and make the KMT live up to the principles in Sun Yat-Sen’s Three Principles of the People.

Of course, the historical weakness of Taiwanese labor is almost wholly a product of the KMT party-state, which cracked down on Taiwanese labor as a potential threat during the authoritarian period and purged Taiwanese leftists during the White Terror. Given this history, there is very probably no way of reforming the KMT, which has likely been corrupt to the core for a very long time. Any attempt by the KMT to pretend that the party has always stood on the side of labor is simply the KMT lying through its teeth. The KMT deserves to be called out on its lies.